Just inches away, a male Cape May Warbler greets me with a song that is no match for its drop-dead gorgeous looks, and then a dapper male Chestnut-sided Warbler arrives to perform its own party piece. In the background multiple Yellow Warblers are going at full tilt — I'd already committed this song to memory, so numerous and vocal are these ridiculously bright new arrivals.

A flash of colour near my feet offers a different distraction, and peering down off the edge of the boardwalk I see a bright orange-and-black male Baltimore Oriole foraging for something to eat. So too are several White-throated Sparrows, while an American Redstart flashes its striking tail as it hops into view and Warbling Vireos move sluggishly in the canopy above.

Now I know: the pre-trip hype was true. Everyone said I wouldn't believe this amazing place, all the birds and the birders. They weren't wrong. There are warblers and other migrants everywhere, flitting, calling, singing, flying. Fiery male Blackburnians, golden-yellow Prothonotaries, skulking Common Yellowthroats and myriad Myrtles. In a moment of warbler coincidence that generates a ripple of laughter among the crowd, one birder's call of "Nashville" is quickly followed by another's of "Tennessee". I smile, too, at a quirky moment of humour among the migrant mayhem that is the daily deal at Magee Marsh.

Magee Marsh in Ohio is the place to be for spring wood-warbler migration, with the hordes of birds including the stunning Blackburnian Warbler (Photo: Brian Zwiebel/Sabrewing Nature Tours)

Centre of the action

Where there are birds, there are birders, and Magee attracts them both in spades. On the first morning I set out early from the hotel for the site's famous boardwalk, and soon found myself in a line of cars turning north off the highway at Black Swamp Bird Observatory, meandering past the woods and marshes towards the centre of the action.

It was as if Birdfair had been relocated from Rutland to the south shore of Lake Erie, a feeling that continued in the car park, where birders cheerily greeted each other while calling out birds passing overhead. There was a palpable air of excitement about the place, and by the time I'd walked the short distance to the start of the boardwalk, I'd bumped into three people I knew, watched nesting Bald Eagles and counted 300 Blue Jays — yes, 300 — streaming westwards.

The boardwalk is something else. A mile-long corridor through wet woodland and scrub, it is the perfect trail in prime migrant habitat, corralling visitors and leaving the rest of Magee to the birds. As a result, migrants are not inadvertently disturbed or 'chased' in the way they might be in more open and accessible areas — vital in the case of tired and hungry arrivals — and they seem all the more confiding for it.

While it can get crowded at busy times, especially during a fall, I enjoyed the novelty of the experience and the camaraderie it triggered. American birders have a reputation for being friendly and helpful, and the boardwalk seems to bring out the best in everyone. From hardcore birders and Amish families to local experts and curious bystanders overwhelmed by the occasion, the unspoken aim was to share, identify and enjoy. I had some great birds pointed out to me by total strangers, and happily returned the favour.

On every visit to the boardwalk, the effort was repaid and the list of birds was different. One morning there was a big arrival of Scarlet Tanagers, gaudy red-and-black males seemingly everywhere, and on another it was the turn of thrushes; one memorable view was of Wood Thrush and Veery perched on the same log.

Clusters of birders along the way indicated key points of interest, from concentrations of warblers and vireos to an American Woodcock in the leaf litter or, on one lucky occasion, an Eastern Whip-poor-will roosting in the open just feet from the edge of the boardwalk. A family of Great Horned Owls and a heavily mobbed Eastern Screech-Owl provided further interest, and rarely was there a dull moment in this outstanding birding location. 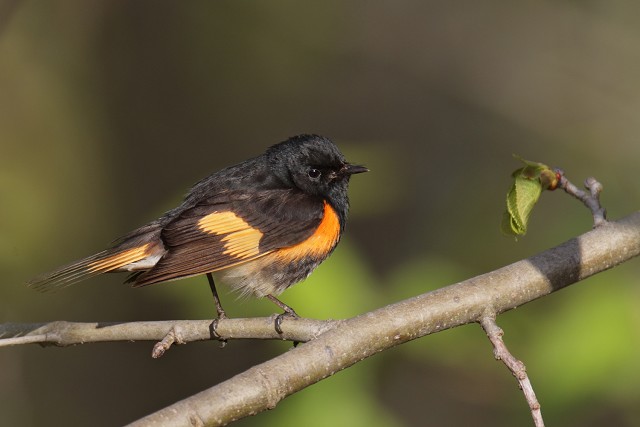 It's hard to beat the sheer spectacle of so many colourful New World warblers in one place, with American Redstart (top) and Northern Parula among well over 30 species heading north from their more southerly wintering grounds (Photos: Brian Zwiebel/Sabrewing Nature Tours)

Birds have been using these vital habitats in north-west Ohio for millennia, but the human celebration of the phenomenon is relatively recent. Organised by Black Swamp Bird Observatory's Executive Director Kim Kaufman and her team, it is seven years young but feels like the long-established centrepiece of spring migration in North America.

At the heart of the event is the conservation of birds and their habitats, offering another parallel with Birdfair across the pond. The Biggest Week raises $40,000 each spring, through participant registrations, an extensive programme of field trips and a range of commercial opportunities, and 100 per cent of the proceeds go back into conservation causes, many of them local.

In a wider context, the event has also put birding firmly on the map far beyond Magee Marsh. Between late April and mid-May, some 90,000 birders are estimated to visit north-west Ohio, and the economic benefit to hotels, restaurants and other local companies is a staggering $40 million. It's what Kim Kaufman describes as "a much-needed shot in the arm" for the region in early spring, and a great example of win-win ecotourism: birding is good for business, and in return birders — and birds — are welcomed with open arms. Everybody benefits. 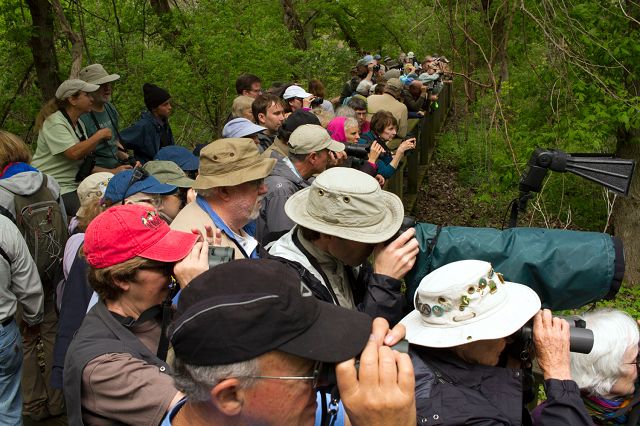 When a rarity turns up, the boardwalk at Magee Marsh can get almost as packed with birders as the trees are with birds — and everyone is keen to help others and share, identify and enjoy great spectacles (Photo: Dominic Mitchell)

One way of spreading the positive birding message is to hand out Biggest Week 'calling cards', included in participants' welcome packs, at every shop, restaurant and petrol station, especially when travelling to sites away from the immediate vicinity of Magee Marsh. And the organisers make it easy for first-timers like me to work out where best to visit: as well as plenty of free local maps and information, a talk on local birding hot-spots on my first day helped identify priorities for the week ahead.

There were many other useful talks, too, from digiscoping and photography to identification and birding by ear. I made a point of attending Kenn Kaufman's lecture on flycatchers to get valuable insights into the identification of the problematic 'empids' I expected to encounter.

Away from the focal point of Magee Marsh and adjacent Ottawa National Wildlife Refuge, there are dozens of fine sites in this prime birding region, dotted eastwards along the Lake Erie Birding Trail, west along the shoreline and 'inland' in the Toledo-Oregon area.

One of my favourites was the vast Oak Openings Metropark, a beautiful mosaic of oak savannah, sand dunes and other habitats just west of the city. I spent a morning enjoying the likes of Lark Sparrow — here on the edge of its range — Grasshopper Sparrow, Eastern Bluebird, Blue-winged Warbler, Great Crested Flycatcher and Broad-winged Hawk.

Even the tiny Metzger Marsh woodlot was alive with migrants, including Black-throated Blue Warbler, which can be seen in good numbers in the area in spring (Photo: Brian Zwiebel/Sabrewing Nature Tours)

There was, however, one warbler that would require a lot more effort. Kirtland's is one of North America's rarest breeding birds, and a specialist of young Jack Pine plantations which are largely restricted to northern Michigan. The population of this near-threatened species fell to just 167 singing males as recently as 1987 and its breeding habitat has shrunk by 33 per cent since the 1960s, but thanks to major conservation initiatives it is on the increase again and, though still localised, the species is faring much better than before.

I took a side trip organised by Sabrewing Nature Tours to look for this beautiful warbler on its breeding grounds. In terms of timing we were on the early side, as most Kirtland's are still arriving back from their wintering grounds in May, but after a long drive north, a couple of hours in breeding habitat and the expert assistance of guide Larry Richardson, our efforts were rewarded with outstanding views of a newly arrived singing male proclaiming his presence on territory — an absolute highlight of the trip.

With the pressure off, we birded the area at leisure and saw plenty of other interesting species, including Nashville, Pine and Myrtle Warblers, Hermit Thrush and Vesper Sparrow, and ended with wonderful views of Rose-breasted and Evening Grosbeaks at another site nearby before returning south. 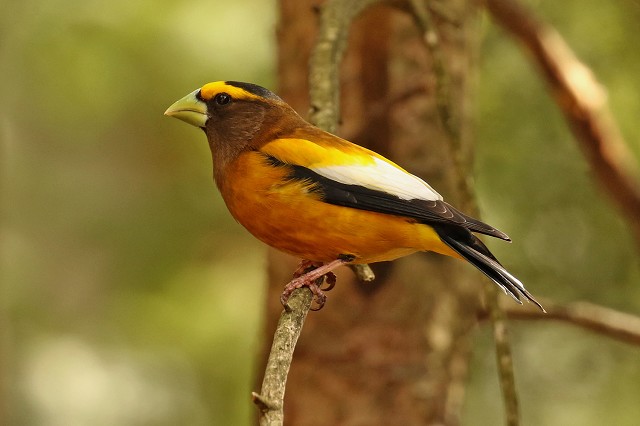 Evening Grosbeaks rounded off a side trip north to Michigan that successfully targeted the near-threatened Kirtland's Warbler, a species that is benefiting from major conservation efforts (Photo: Dominic Mitchell)

Back at Magee Marsh as the trip drew to a close, the weather changed and even more migrants began to arrive. At times the place was crawling with warblers, including new-in Ovenbird, Northern Waterthrush and Hooded Warbler, while an exhausted female Blackburnian Warbler at my feet was a sad reminder of the ordeal that is long-distance migration for some birds. Then the shout went up: "Kirtland's Warbler at the start of the boardwalk!" Not to be outdone by Michigan, and not for the first time, Magee had produced its own Kirtland's for the crowds, completing an amazing cast of warblers for the week and providing an unexpected finale for my trip.

This area is one of the most outstanding for migration in North America, and next year a special tour is giving you the chance to experience The Biggest Week in American Birding in north-west Ohio, and also visit Michigan for Kirtland's Warbler and more. Full details can be found at www.birdwatch.co.uk/open/?page=reader-holiday-ohio-michigan