AUTUMN and winter provide plenty of ID conundra as birds moult into their less ostentatious winter plumages, but the snipe species can be relied upon to be cryptic all year round.

Our only breeding snipe is Common, but from mid-autumn onwards it is joined by its smaller cousin Jack Snipe, and from then on care should be taken when separating these two well-camouflaged waders. The British snipe species are found in wetland environments, but they can be seen on both fresh and brackish marsh, pool and river fringes, as well as damp grassland. Harsh weather can bring in massive influxes, and last winter’s freeze-up delivered huge numbers of Common Snipe, as well as good counts of Jack, and both species turned up on tiny local ponds and in gardens.

Common sets the snipe standard. It is a Blackbird-sized, fairly stocky wader, with a complex dark brown, rufous, buff and white colour scheme. It has a long, straight but tapered bill, well over twice as long as its head, and fairly long and sturdy legs which have mostly the tarsus visible in the field. Its head is broadly striped with dark brown and buff, with a central pale buff crown-stripe; the sides of the crown are dark brown and there are weaker stripes through the eye and bordering the bottom of the ear coverts.

The mantle has a pair of bright buff lateral stripes and two central stripes of the same hue bracketing rows of dark-centred large and scaly-looking feathers, fringed with a variable white to pale buff colour. The scapulars are generally more ornate, similar to the mantle, but with a slightly florid inner border of buff. A white belly is bordered with dark barring on the flanks, and the dark breast and chest streaking has a buff ground colour accentuating a fairly pronounced pectoral cut-off point.

The flight feathers continue the dark-centred, ornate-bordered theme, but also have a dull cream inner vane with complex dark patterning. The eye is drawn to a prominent white trailing edge on the flying bird. The tail is almost bright orange, and when spread shows white terminal edging, but the base of the feathers are almost black.

Jack Snipe does tend to sit tight on approach, though, often hunching down close to the ground and allowing close views down to a couple of metres, if you actually manage to see it. It is an exceptionally cryptic species, similar to Common Snipe in general plumage arrangement, but with key differences. It is around three-quarters of the size of Common, but can appear smaller. It often draws attention by sneaking out of grass or reeds to demonstrate its curious feeding method. This is often likened to a sewing machine and is performed while neurotically bouncing up and down on tensed short legs, as if on springs, appearing to thread its shorter bill through the mud. However, Common can ‘bounce’ when feeding too, so note plumage features rather than jump to a ‘jizz conclusion’.

While on show, time should be taken to note the cryptic patterning. Jack’s head has a solid dark crown, a split supercilium where a thin dark line is apparent in a broad pale buff expanse, and pale ‘cheeks’ which are surrounded by dark feathering; all this adds up to a ‘cuter’ appearance. Jack Snipe has a similar mantle arrangement to Common, but the cream-to-buff back stripes are brighter and more obvious, and the mantle feathers extend further over the flight feathers, giving the bird a shorter visible primary projection. The flanks are lightly streaked instead of strongly barred, but otherwise the underpart feathering is similar in colour and arrangement.

Overall, the species can look darker in comparison with Common Snipe due to its less patterned upperpart feathers, but variations in light and humidity affect this. Again, the traditional view that Jack Snipe flushes almost from underfoot, flies low and settles invisibly nearby holds true most of the time, but birds can be observed in direct flight when flushed by the tide or a predator, or indeed on arrival at a site. It is generally silent, but occasionally utters a quieter version of Common Snipe’s call, and has a slightly less prominent white trailing edge to the hindwing. In flight the species appears much more compact, sometimes almost Starling-like, than Common, and while the latter’s feet project a little beyond the tail, Jack’s are concealed in flight. 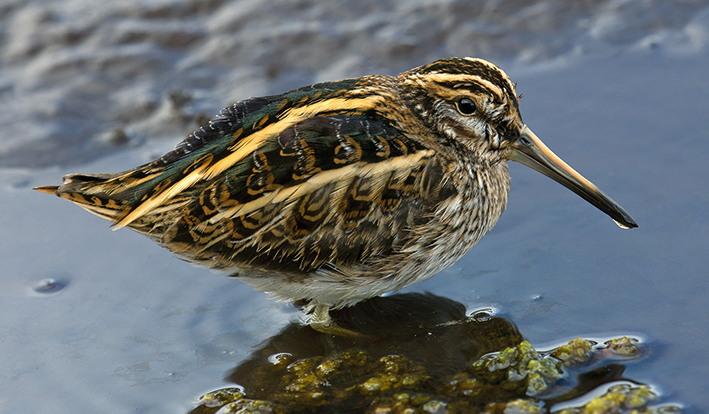 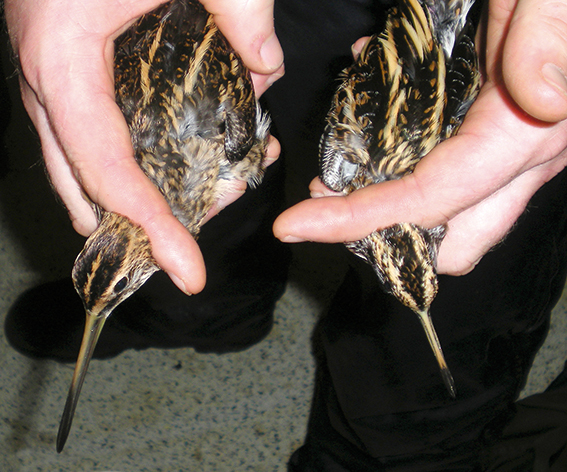