When it comes to choosing their wintering destinations, Antarctic skuas are flexible. This is shown in a study of an international research team led by the polar ornithologist Dr Hans-Ulrich Peter from the Friedrich Schiller University, Jena (Germany). According to the study, the majority of South Polar Skuas spend the Antarctic winter in the Northern Atlantic, but about a third of the population overwinters in the Northern Pacific, tens of thousands of miles away.

To identify the birds' migration routes, postgraduate Matthias Kopp, under the guidance of Dr Peter, fitted geolocators to South Polar Skuas in their breeding areas on King George Island, about 120 kilometres off the Antarctic mainland. He has gathered positional data for several years, which has been analysed with help from British colleagues and a scientist from Switzerland. "With the help of these data we can now for the first time definitely say that the South Polar Skuas are not overwintering, like their close relatives the Brown Skuas, off the Argentine coast but mainly in the northern hemisphere," explains the head of research, Dr Peter. Until now, scientists have only been able to speculate about where the birds overwinter and the routes they use to get there. "The observation of single birds led us to the assumption that they overwinter in the Atlantic. But so far it wasn't known that a great part of them stay as well in the middle of the Northern Pacific in the winter", says the Jena scientist, who has been researching in Antarctica regularly since 1983. 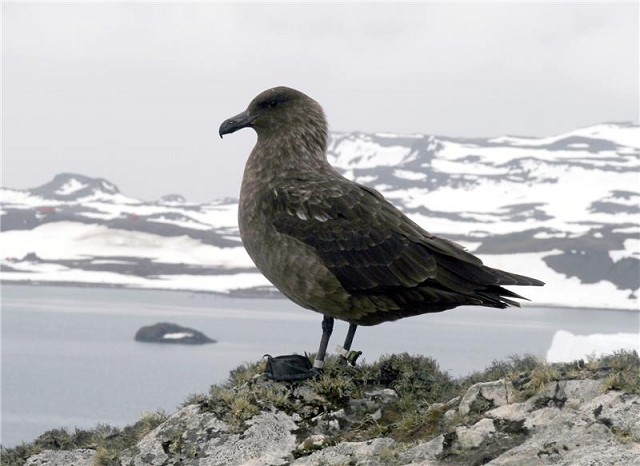 The flight routes of birds heading for both overwintering locations show remarkable similarities. The outward routes north and the return routes south are shaped like a slip-knot, crossing on the equator; on both flights the birds follow a big figure-of-eight.

The skuas overwintering in the Atlantic first fly along a wide northwards corridor along the east coast of South America, then head northwest after passing the equator. At the end of May they arrive at their destination in the Northern Atlantic. In the three months they spend on the open sea they wander with the wind and the ocean current for more than 1,000 kilometres to the east, before starting their return flight at the end of August. Before arriving at their breeding sites on King George Island, they rest for up to three weeks off the Patagonian coast and replenish their body reserves.

The flight route into the North Pacific leads at first along the west coast of South America and then changes direction towards the northwest above the equator. In mid-May, two weeks earlier than their conspecifics overwintering in the Atlantic, the skuas arrive at their winter quarters in the Pacific. These birds similarly drift with the wind and the waves up to 3,000 kilometres eastwards. Their way back leads them along a wide curve, initially in a southwesterly direction towards New Zealand and then southeast into Antarctica. There, they rest for a few days before returning to their breeding site. "We think that the animals need this resting phase to recover from the strain of the long trip through the tropics, where food is scarce," Dr Peter says.

Once the skuas have decided on an ocean for their winter quarters, they will always head for the same destination in subsequent years. At present the scientists don't know the ultimate reason for the animals' choice of destination. "We know for sure, though, that the animals get their own bearings and don't learn the route from their parents", Dr Peter says. For him and his colleagues some questions still remain unanswered; therefore the Jena scientists will leave for a research trip to Antarctica this year — 100 years after Roald Amundsen, the first person to reach the South Pole. Two of Dr Peter's students are already on site and have captured the first skuas; it will be Hans-Ulrich Peter's 22nd expedition to the world's southernmost continent.