Once again, a trip offshore produced some fascinating insights into bird migration. Unfortunately, much of it was pretty disturbing — the rest was also fairly gory, but in a rather better way. I always knew that, offshore on a survey vessel in the German sector of the North Sea during the first half of November, there would be some birds to see, and could even have predicted the majority of them. But in the world of birds there is always something new and unexpected — and this trip proved to be no exception.

On the night shift from 18:00 to 06:00 there was never really chance of seeing much in the way of daylight; not that this mattered much, as most of the avian action occurred during the hours of darkness, luckily building to a peak just before dawn — right after my shift was finished. The night of 6th November was quite traumatic: a quick trip out on deck after the midnight meal revealed hundreds, if not thousands, of migrants caught up in a "circulation" around the vessel. As it was overcast, the birds had lost their way and were drawn in ever-increasing numbers towards the lights of the vessel. Birds endlessly circled the vessel wasting precious energy as the night wore on. Unsurprisingly, the vast majority of these were thrushes — largely Blackbirds and Redwings with smaller numbers of Fieldfares and Song Thrushes. Hundreds of Starlings, plenty of Skylarks, finches, Robins and more also flitted in and out of sight. The night was full of contact calls, obvious even above the noise of the vessel. I noted that, even at this time of year, there were also quite a few moths around. 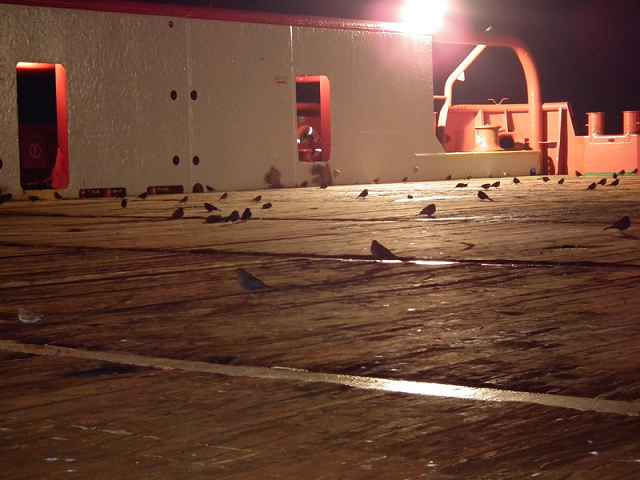 Shortly after shift I went out on deck. By this time many of the birds were exhausted and had landed on board; thrushes and Starlings carpeted most surfaces. Many were dead with terrible impact injuries — around 15 Blackbirds, several Redwings, a few Starlings and a Water Rail lay lifeless on the deck while their exhausted companions hopped around them. A few grotesquely injured birds were obviously doomed. It was depressing to consider what the total impact of all the offshore installations (such as windfarms) and vessels in the North Sea over the course of autumn migration must be, not to mention global effects. 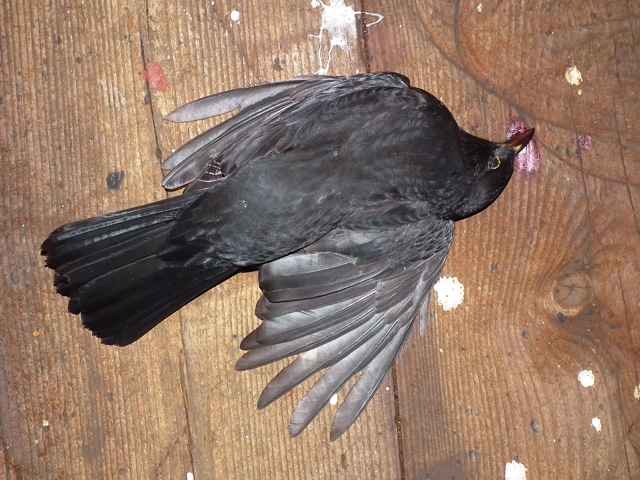 Dead Blackbird — just one of many collision victims on the vessel (Julian Bell). 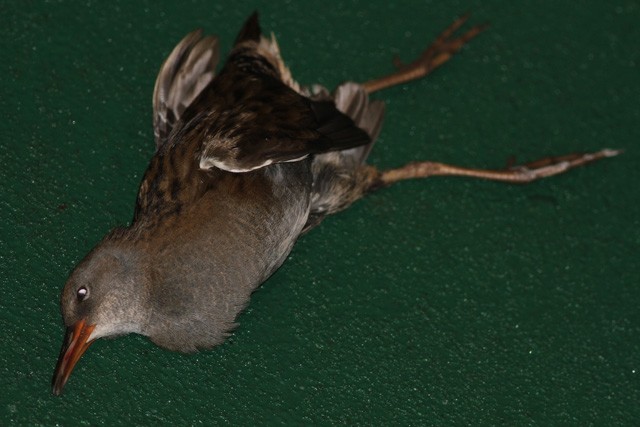 Another victim; this time a Water Rail (Julian Bell).

As usual, most of the survivors left shortly after dawn. However, many birds (largely Skylarks) remained circling the vessel until well after daybreak. During this time there were the first positive signs of the experience. A few Black Redstarts were feasting on the moths that had arrived during the night; typically this species seems to settle in quite quickly and has no trouble finding food. However, this feeding advantage afforded by platforms and vessels would surely be much reduced or non-existent with offshore windfarms. 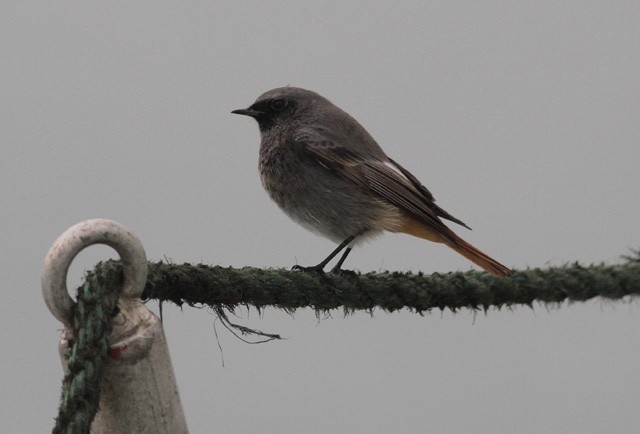 This male Black Redstart benefitted from an overnight arrival of moths (Julian Bell).

A Woodcock or two put in brief appearance — another typical November migrant often seen better in the offshore environment than on land. The vessel provided a refuge for at least one of them as they evaded the attentions of marauding gulls. 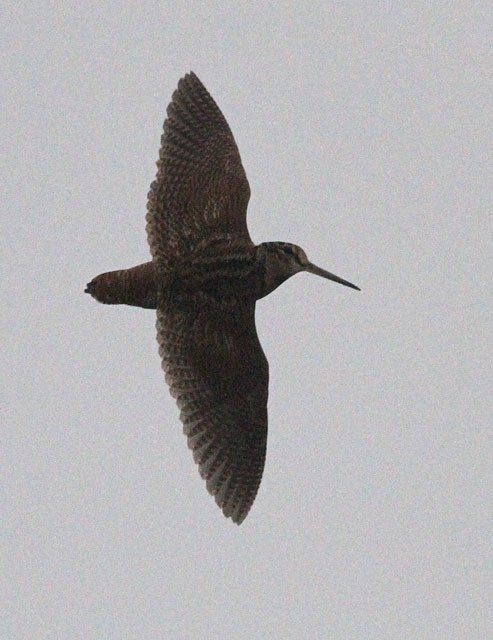 Woodcock often gave better views at sea than we are accustomed to on dry land (Julian Bell).

Fewer birds were seen the following night, though still plenty by offshore standards — thankfully therefore fewer fatalities. Unidentified owls were seen overhead and even a small flock of swans joined the circulation for a while. With stronger winds and heavier seas the back deck was awash and therefore no longer suitable as a resting place for tired migrants. However, a Water Rail scuttled about on deck and, true to form, managed to conceal itself without any problems. By dawn just a few Blackcaps, a flock of Starlings and small numbers of Blackbirds remained onboard. 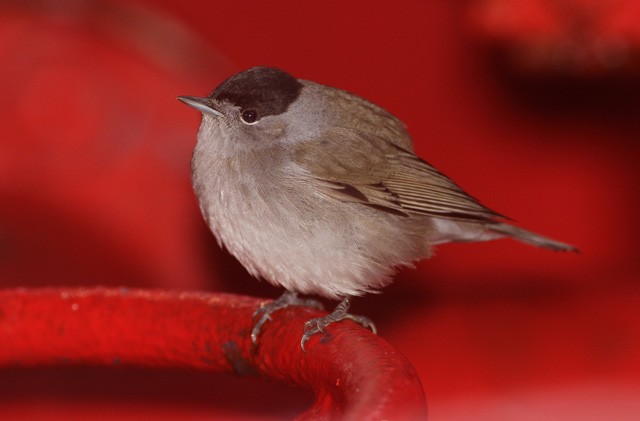 Male Blackcap on board (Julian Bell).

And so the trip continued; new species turned up daily — or rather nightly. The pattern continued to repeat itself: few birds immediately after dark, but numbers gradually building throughout the night. Short-eared or Long-eared Owls remained frustratingly unidentifiable, but one or two were seen most nights. Piles of feathers, a severed Redwing head and other decapitated corpses were evidence that these birds were not just caught in the circulations, but also using them as a source of food.

Over the next few nights, further additions to the species list included Snow Bunting, redpoll sp., and Snipe. In strong easterlies on 11th November, five Bean Geese flew in and settled on the sea around dawn, and were followed by a European White-fronted Goose — both new offshore species for me and obviously part of the recent Europe-wide movement. Offshore, wildfowl tend to be few and far between, so a pair of Scaup the following day was also something of a bonus. A surprise bird on 13th was a migrating Bittern which circled for at least a few hours — the first I have ever seen offshore. Although seen well in the binoculars, this bird unfortunately did not lend itself to photography.... 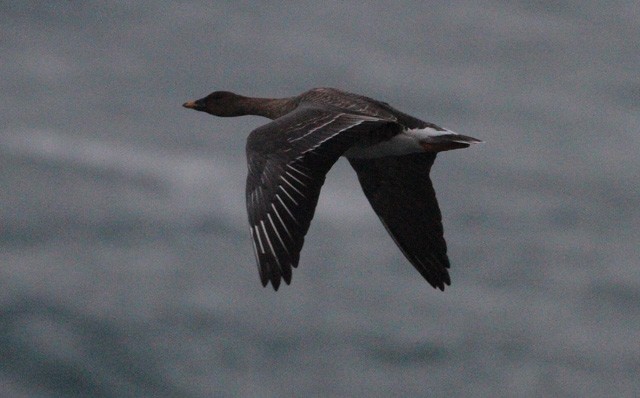 One of five Bean Geese seen on 11th (Julian Bell). 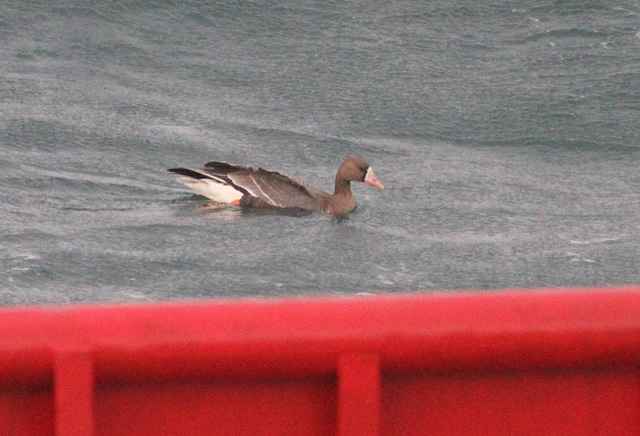 ...and an adult European White-fronted Goose on the same date (Julian Bell).

The pace picked back up again on 14th November; this was the day the owls finally gave themselves up. In the darkness at 06:00, shortly after my shift ended, a Short-eared Owl flew in and started plucking a Brambling on one of the life-rafts. Shortly afterwards a couple of Long-eared Owls also gave good enough views to enable a positive ID. Passerines over and above the usual thrushes and Starlings included Lapland Bunting, Yellowhammer, Chiffchaff and a handful of Goldcrests. As it became light other species appeared, including a Little Auk and a Red-throated Diver. 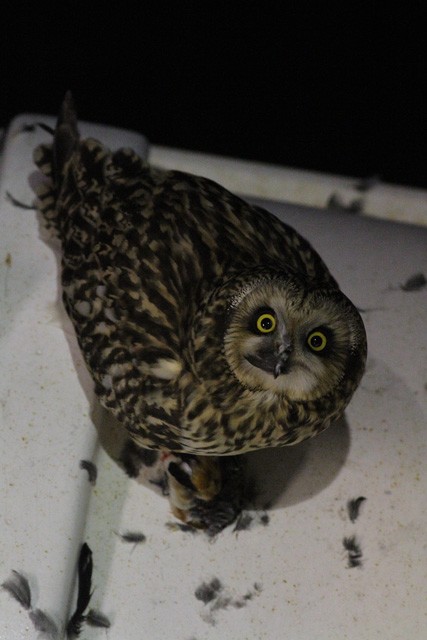 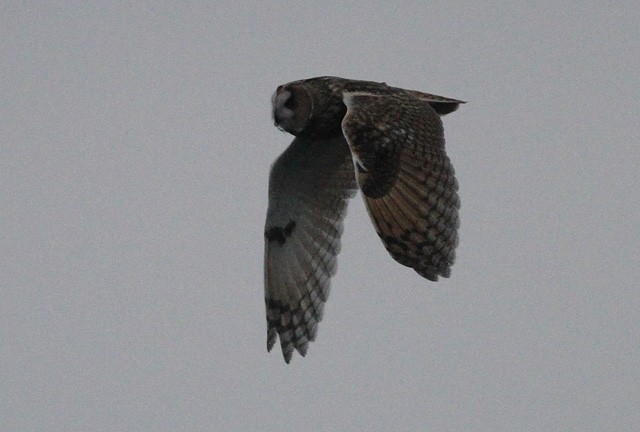 Long-eared Owl in flight from the vessel (Julian Bell).

The final night was again productive, with my first ever offshore Peregrine as a highlight. After a number of failed attempts, it finally caught a thrush on one of its forays out into the darkness. By contrast, a Sparrowhawk almost casually plucked a bird out of the air and used the same crane boom as the falcon to pluck its victim. At least one of the Long-eared Owls was still present — once again favouring the underside of the helideck as a roost. 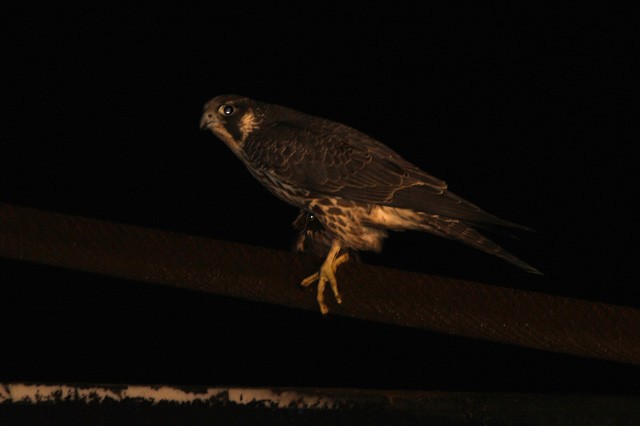 The author's first Peregrine from the vessel (Julian Bell).

Documenting this phenomenon in the darkness was extremely difficult using a hand-held DSLR and a slow 400mm telephoto lens with no image stabilisation. I was surprised to find that one technique that gave some success was using the fully automatic one-shot mode and hence flash. Despite shutter speeds as slow as 1/60, the results were quite reasonable at times. Another trick I tried was to use a ridiculously high ISO value while at the same time underexposing as much as possible — this also gave some decent results. I also used a compact super zoom some of the time. 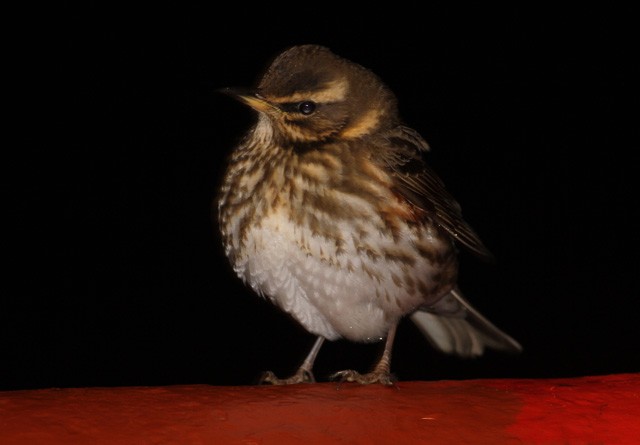 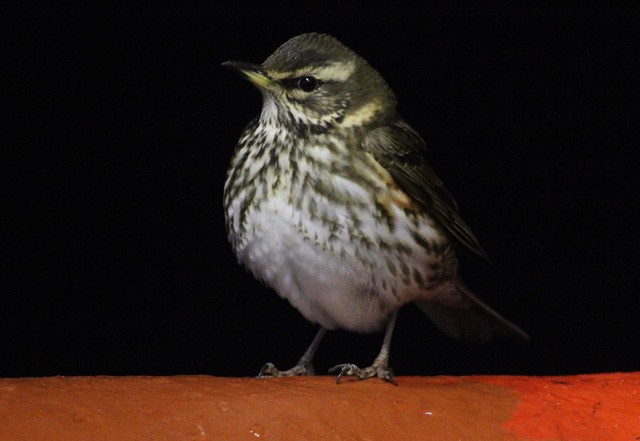 ... and the same bird photographed with very high ISO settings but no flash — deck lighting helped to illuminate the bird (Julian Bell).

The increasing use of subsea installations in the oil and gas industry, at least in some areas, will help reduce the threats the industry poses to migrating birds. However, given the current massive interest in offshore windfarms, it is quite possible that the boom in number of windmills may more than compensate for this trend. These windfarms will inevitably have to be illuminated for navigation purposes, thus raising the risk level for low-altitude migrants. Hopefully sufficient thought will be given to how bird-safe lighting can be achieved.