Between 5th and 9th May I revisited Central Park, NYC, this time travelling with a soft bag (hand luggage only), allowing me to hit the ground stumbling! This enabled me to short-circuit the carousel, go straight through to customs and then into the renowned yellow cab. Within the hour, I was checking into my hotel. Upon exiting the hotel, I was spun through the revolving doors by an over-eager incoming guest, who deposited me on the sidewalk tout de suite, whereupon I found myself playing eyeball ping-pong with an oncoming lifer, though the ID wasn't that straightforward — he had a hat on! It was John McEnroe. Hoping that this chance meeting would be a good omen for the Park, I made my way to the famous, and appropriately named, Rambles where even the resident birders sometimes get temporarily lost. I entered the area known as the Upper Lobe, where I was unexpectedly rewarded with a not-always-easy-to-see Blue-winged Warbler appearing and then disappearing through the foliage as it dropped down to meet the water's edge. I thought "a damn good start by anybody's standards...now where's that coffee?" That first half-day yielded nine North American wood warblers, three vireos and two orioles. Lying in bed that night, instead of counting sheep from the 14th floor, I decided to count skyscrapers on the Manhattan skyline instead: 1–2–3–4–5...zzzzzzzzz!

Sunday 6th was again somewhat overcast, but the sun showed occasionally, and in doing so produced a lifer for me in the shape of a Broad-winged Hawk (as I understand it, not often seen over the Park). While walking along the trail with several local birders, a hushed "Kentucky" pierced the silence and the drum roll of anticipation kicked in. Another lifer in the making? Alas, no such luck, as it materialised then vaporised in quick succession and was seen by just one seasoned observer. C'est la vie! However, a Raccoon extending the paw of friendship was almost adequate compensation for missing out on a prize Oporonis...or was it? 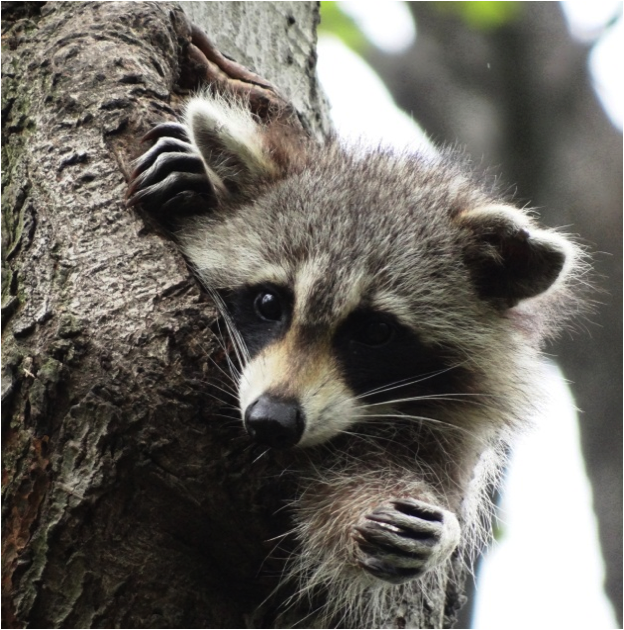 Monday 7th proved to be a twenty-warbler day (it's interesting that at least twelve of the warbler species seen that day have occurred in Europe, with the UK taking the lion's share). I also saw a superb male Summer Tanager, delivering the very distinctive staccato pit-ik-pitik-pitik call, one of two seen on the day. It never ceases to amaze me that this pedestrian 2.6 × 0.5 mile park, surrounded by continuous concrete high-rise, should concentrate such a diversity of gems, mostly emanating from the jungle canopies of Central/South America and all dipping into this green oasis en route to their respective breeding grounds in the north and west of this great continent.

Tuesday's yield proved to be not too dissimilar to the previous days. With the same low-pressure system on hold, I woke up at 6am on Wednesday 8th (my last day), and I was determined to hit the ground running whatever the weather (grey and with even more precipitation). As I made my way around the park, I took shelter at a high point (Belvedere Castle), which places you at canopy level overlooking a reed-fringed lake where, perchance, I met some birders who happened to mention a Prothonotary Warbler "still at Bryant Park", some 36 blocks to the south. Without further ado, I headed straight out. 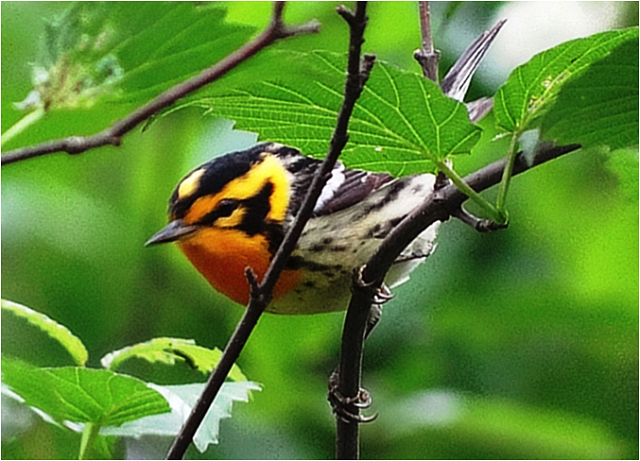 Exchanging one big park for a much smaller one and then heading south on 5th Avenue, I jumped a bus which took me downtown to Theatreland's famous 42nd Street. A few strides later I found myself outside NY Public Library, behind which lay a 300m × 200m park. Bryant Park is less than 1% of the size of Central Park, with restrooms at one end and Starbucks at the other, so I was well placed to take advantage of the amenities during my last four hours before JFK beckoned. The park is essentially a lawned area with short shrubby borders, surrounded by a paved walkway, which in turn is framed by very tall London Plane trees. Arriving at lunchtime, I soon found a local birder 'warbler necking' and I asked "Are you looking for Prothonotary?" "No," he replied — "Worm-eating!"

The next four hours were amazing! Flying out of the shrubbery and alighting on the lawned area, there were occasional Common Yellowthroats, while Ovenbirds appeared and disappeared beneath and behind the park benches and chairs, as office workers sat enjoying their lunch-break sandwiches. As we scanned the canopy for migrants grounded by the gloom, unbelievably a Wood Thrush dropped into some low ground cover only 7–8 metres away, looking slightly bewildered by the now quartet of equally bewildered birders — highly unusual for a normally not-so-confiding species. 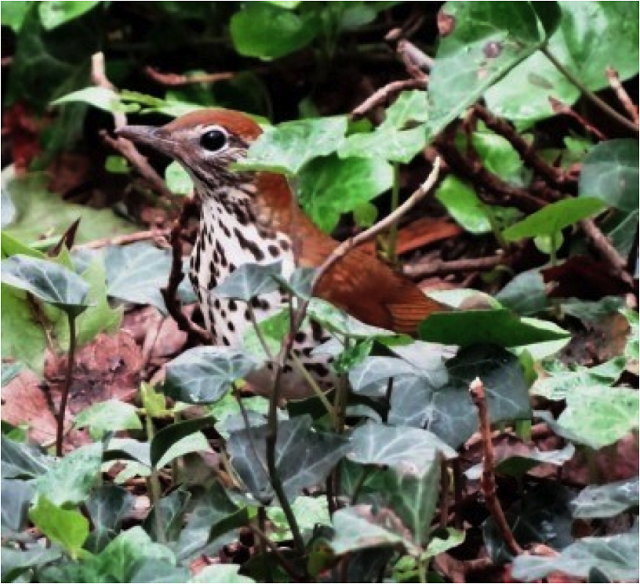 Having been told that the Prothonotary Warbler was now at the front of the NY Public Library in a single line of Locust trees, I walked over to another birder — who was with a guy taking a shot with his camera phone 20cm away from a male Scarlet Tanager...which I missed. Aaaargghh! Upon arriving at the front of the neo-classical library building, with bride, groom and entourage enjoying a photo-shoot on the library steps, we eventually found several warblers in the adjacent trees, backdropped by a canyon of glass, steel and stone, with the accompanying maelstrom of humanity better known as 5th Avenue! With the gloom deteriorating almost to the point of becoming dusk at mid-day came the appearance of Black-and-white, Palm, Yellow, Northern Parula and, yes, Prothonotary Warbler! Even in the fading light, with its golden brilliance satiating my visceral needs, this was a fitting end to a remarkable trip. 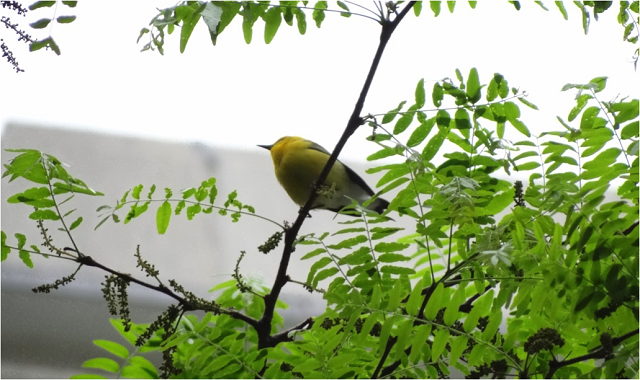 The day's tally contained at least 17 transient species, an amazing yield from just six hectares. More than half Bryant Park's total checklist are spring passage migrants. To put those stats into perspective: Central Park has many water features, including a reservoir, a lake and assorted meres/ponds, is 100 times larger, and hosts many more active birders. It has a checklist of 244, compared to Bryant Park, which has no standing water and enjoys a total of 90 species (since 2004) — not bad for a "glorified window box". Interestingly, Canary Wharf's 2.5 hectares over a similar 8-year period produced 37 migrant species.

This article is not a trip report per se; it is more of an introduction to urban-core birding at its best: when time is of the essence, perhaps giving more bang for buck, and all from a park bench or two with access to all mod cons. Now that's what I call civilised birding!