Scientists from the University of Oxford, the Cornell Lab of Ornithology, and New York City Audubon examined migrating bird behaviour over seven years at a special location, the ‘Tribute in Light’ in New York City. The tribute is held to commemorate the 11 September 2001 terrorist attack on the World Trade Center.

During the tribute, two strong beams of light, each with 44 xenon bulbs of 7,000 watts, pierce the night sky, replicating a light-image of the ‘twin towers’ of the World Trade Center, where nearly 3,000 lives were lost.

"We found that migrating birds gather in large numbers because they're attracted to the light," says Benjamin Van Doren of Oxford University, a lead author of the study. "They slow down, start circling, and call more frequently. They end up burning energy without making any progress and risk colliding with nearby buildings or being caught by predators."

The New York City study has been a rare opportunity to witness the impact of powerful ground-based lights on nocturnally migrating birds, according to co-lead author Kyle Horton, now with the Cornell Lab but working at the University of Oklahoma during the study. "This analysis would not have been possible without the help of tribute organisers." 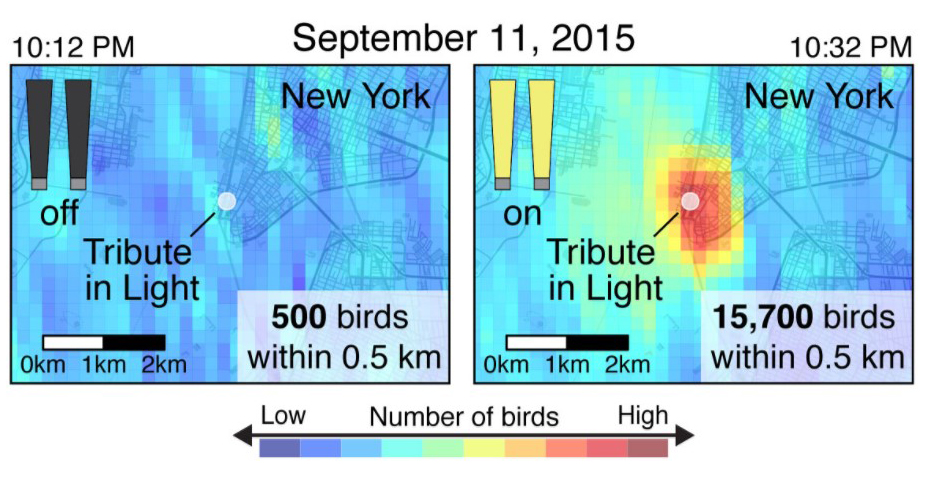 Radar images reveal how many birds were aloft over New York during the 2015 Tribute in Light. With lights off (left), birds disperse and continue with their normal migration routes; when the lights are on (right), the birds are drawn to the light beams and concentrate in much higher numbers. Figure adapted from the scientific paper, courtesy Proceedings of the National Academy of Sciences (via Cornell Lab).

New York City Audubon reached out to the original tribute organiser, the Municipal Art Society, to inform them over the impacts of artificial light on migratory birds as they planned the very first event. In 2002, the two organisations developed a protocol to address the issue. The powerful tribute lights are turned off for approximately 20 minutes whenever more than 1,000 birds are seen circling in the beams or flying dangerously low with frequent calling. The National September 11 Memorial and Museum took over as tribute organiser in 2012 and has continued this practice.

With full illumination, the study's authors found that densities of birds over lower Manhattan could reach 60 to 150 times the number that would typically be found in the immediate sky at that time. The concentrating effects of the intense light on the birds reached as high as 2.5 miles, and the experience was consistent even on clear nights. Fortunately, when the light beams were turned off, the birds dispersed within minutes to continue their migrations.

The implications are broad for areas even around ordinary homes, as well as other brightly illuminated locations at night, such as large buildings, sports stadia, construction sites, and offshore oil rigs.

For more details including video clips of birds over lower Manhattan at night, see this report from the Cornell Lab.