Three populations of Barnacle Goose occur in the UK, two of which are entirely migratory and come here for the winter months from their breeding grounds in either Svalbard or Greenland. Those birds found on the east coast of the UK and the Solway Firth are largely from the Svalbard population, while those from the Greenland population are chiefly found on the west coast of Scotland and in Ireland.

The third – and smallest – population is made up of naturalised birds, resident here throughout the year. Most of these are found in England, but also smaller numbers also occur in Wales and Scotland.

The naturalised population is regularly monitored through the Wetland Bird Survey (WeBS), and the long-term trend shows a rapid increase in numbers since the 1980s, and in particular since the mid-2000s. The population is currently estimated to be 4,400 individuals (Frost et al 2021), which is more than 60% higher than the previous estimate of 2,700 when last assessed in 2011. 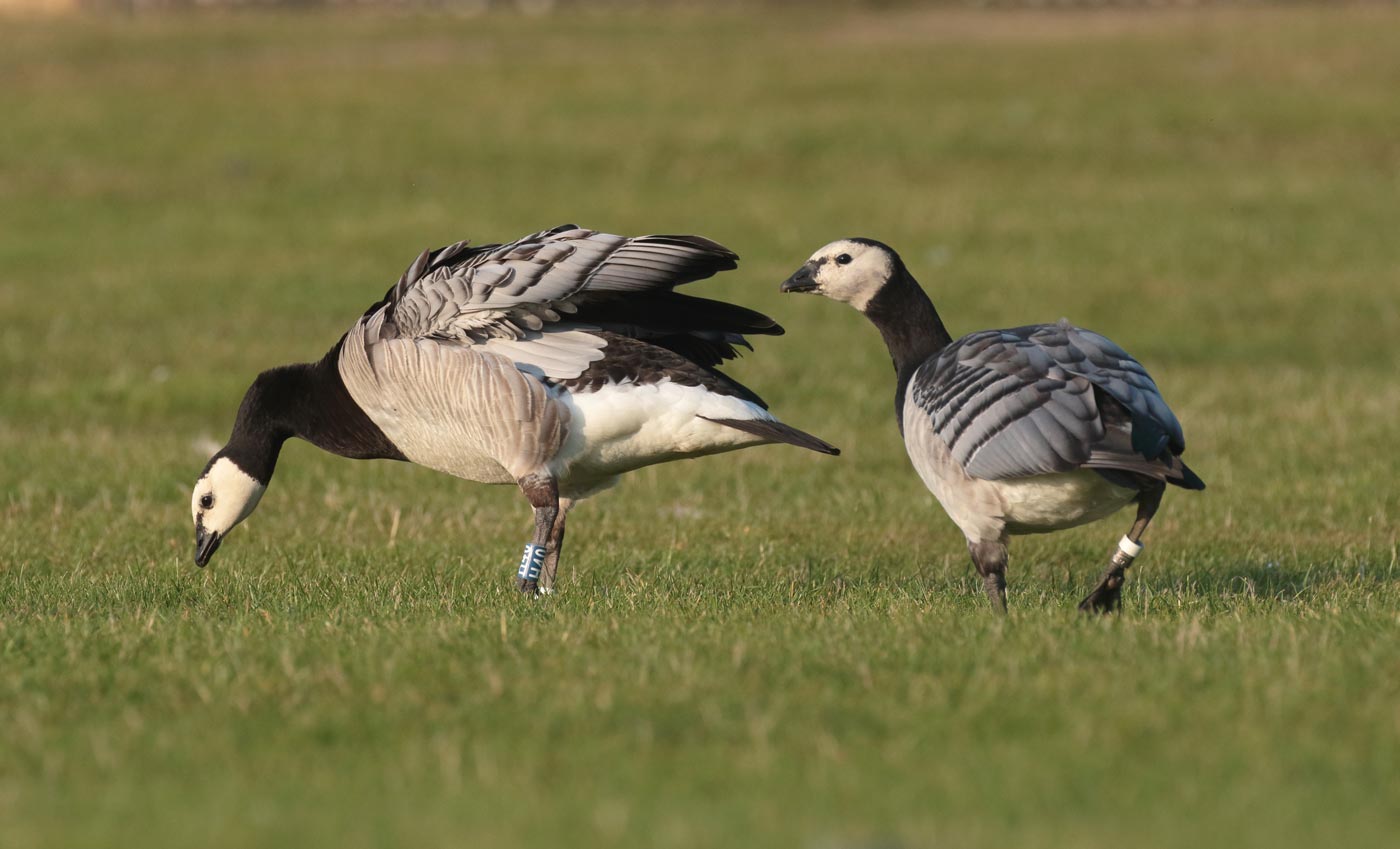 A total of 776 Barnacle Geese from naturalised populations around England and Wales have been colour ringed this summer (Andy Bloomfield).

Despite flocks of birds (sub-populations) being found at sites across the UK, much remains unknown about the movements and demography of this naturalised population. The absence of such fundamental information, such as data on movements, survival and mortality has hindered efforts to understand the demographic causes of the observed increased in population size.

Previously small numbers of birds have been caught and colour-marked in Bedfordshire, England, and in the Scottish Highlands. Results from these studies have yielded interesting returns, such as birds marked in Bedfordshire having been re-sighted in France, and those marked in Highland have since been sighted in Norway and Iceland (Mitchell et al 2021). The latter sightings are particularly interesting, suggesting that Scottish hatched goslings have joined the migratory routes of the Svalbard and Greenland populations.

To deliver up-to-date information on the naturalised population, our study aims to colour-mark birds in England and Wales to assess whether sub-populations in the UK are mixing, and to what extent this is happening. We also hope to learn whether any movement occurs outside of the UK with naturalised birds mixing with and joining migratory populations breeding in Greenland, Svalbard, Arctic Russia, across the Baltic and other North Sea breeding populations. Finally, we aim to produce the first survival analyses to be undertaken on this population.

The colour-marking of birds has already begun, with small numbers being caught and ringed during spring 2021. However, Barnacle Geese are easiest to catch when they are in moult, when large numbers can be rounded up and encouraged into a corral. During July, five catches took place across England and Wales, resulting in 776 birds being caught and colour marked. All birds carry a blue coded ring (Letter, Number, Number; e.g. 'A72') and, on the corresponding leg, a plain colour-marker denotes the site in which the bird was ringed at. The plain colour-marker can either be above or below the BTO metal ring.

How can you help?

You can help us learn more about this population of geese by looking out for colour-marked birds. Soon birds will start dispersing from their moulting sites and we're keen to learn where they go next. Do Barnacle Geese frequent your local patch? If so, please do check them for colour-rings. These can be reported to us at the Waterbird Colour-marking Group website, where you'll receive instant history feedbacks on the birds reported. Sightings can also be sent to Kane Brides via email. All sightings are welcome, no matter how frequent.