In a new study published in The Auk, the journal of the American Ornithologist's Union (AOU), researchers have proposed that Bahama Woodstar — a common and familiar sight across the Bahama Archipelago — actually comprises two species.

Bahama Woodstar is currently treated as polytypic with two subspecies: one found throughout the northern islands, and the other only among the southern Inaguan islands. It is a garden bird across the archipelago and, as lead author Teresa Feo explained: "Much of the fieldwork was literally conducted sitting at the backyard tables of birders, holding the sound recorder in one hand and a cup of tea in the other."

Feo, along with ornithologist Christopher Clark, recorded the pops and whistles produced by the males' tail feathers during mating display dives. They found that the minor differences in tail feather shape — Inaguan birds possess a slightly more forked tail than those found in the northern isles — resulted in distinct visual and acoustic signals in both forms, ensuring that males would only attract females of their own kind. 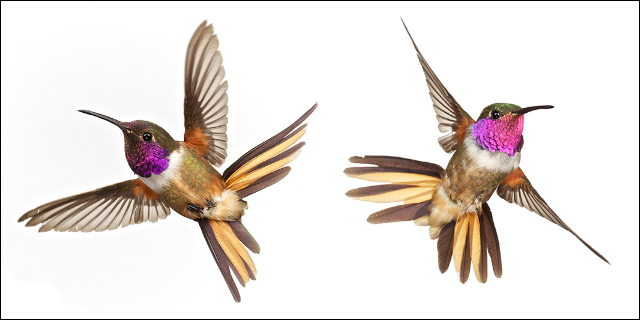 Additionally, differences were discovered between the two forms' vocalisations, with songs, calls and scolding sounds all varying enough to indicate a long history of geographic separation. Beak and wing lengths were also compared, while DNA analysis on tissue samples taken from the two populations found many species-level differences that suggest that they have evolved in isolation for around 500,000 years.

The researchers concluded that the northern islands subspecies should retain the familiar name of Bahama Woodstar (Calliphlox evelynae evelynae), and proposed that the southern subspecies ( Calliphlox evelynae lyrura) be named "Inaguan Lyretail" — based on the forked tail's resemblance to a classical lyre harp. The team will now petition the American Ornithologist's Union to recognise the split officially.