El Oro Parakeet is an endangered species found only in four provinces of south-western Ecuador, where it is restricted to an area of approximately 290 square miles on the western slope of the Andes. It inhabits humid cloudforest, originally between 600 and 1,100 m altitude, but now increasingly higher, with much of the forest fragmented, which causes difficulty for its dispersal, and therefore its survival.

Due to loss of its forest habitat, the species' estimated population size has decreased to no more than 1,500 individuals, and possibly as few as 350. This is a seriously low number, particularly given that Dr Martin Schaefer, executive director of Fundación Jocotoco, discovered that the parakeets breed co-operatively, which in effect means that fewer birds in the population reproduce as the breeders will have several non-breeding helpers. 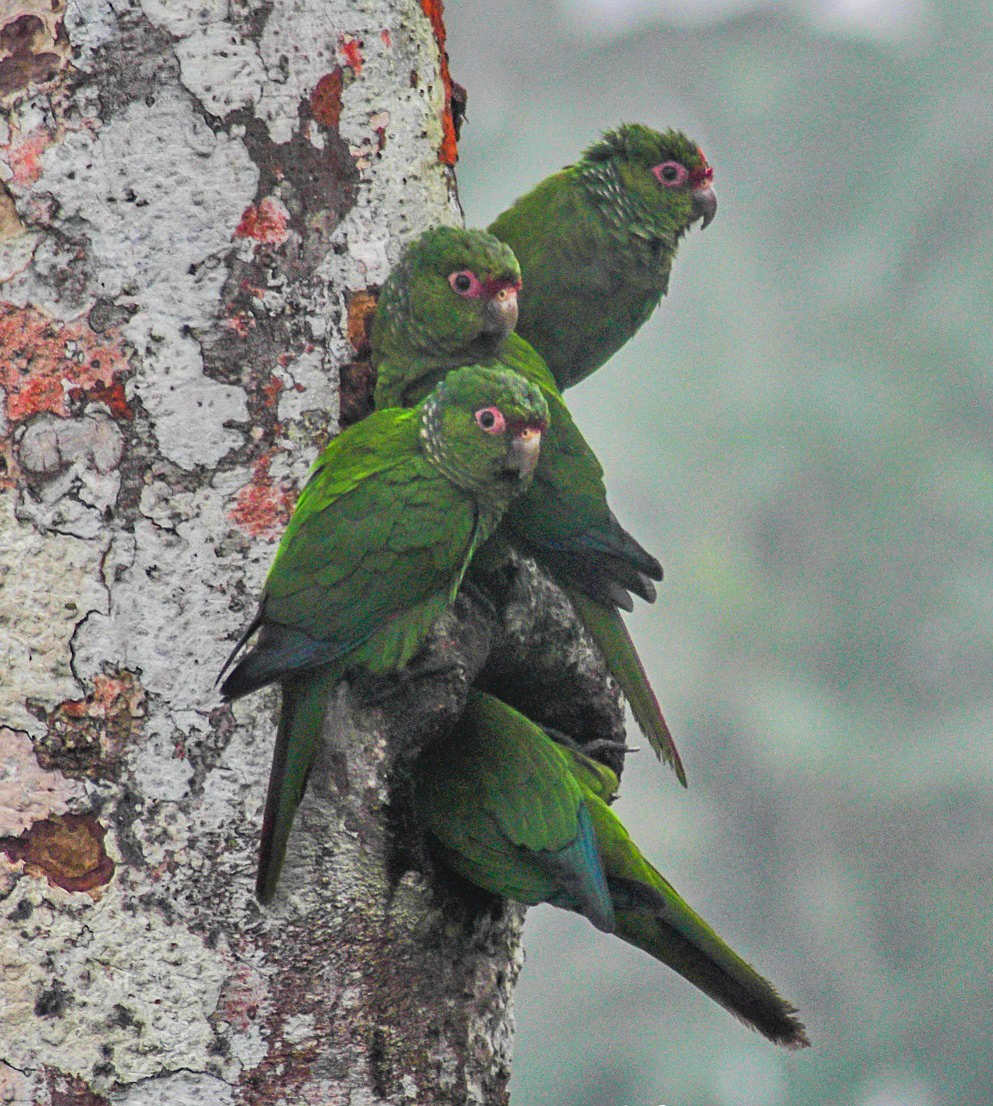 Since 2001 the Loro Parque Fundación has supported activities with Fundación Jocotoco to help the conservation of this species, mainly in the 2,200-ha Buenaventura Reserve (owned by Jocotoco), and on land identified for an ecological corridor which is gradually being established. The project includes research on reproduction, the installation and monitoring of nestboxes, habitat restoration, opportunistic extensions to Buenaventura Reserve, to maintain and rebuild genetic diversity through the corridor, and environmental education with local communities.

The last activity is being strengthened, not only so that as many people as possible understand the special status of El Oro Parakeet, and agree to support measures for its conservation, but also to use the parakeet as a flagship species to address the broader issue of the capture and trade of psittacines in the region. These especially include Red-masked Parakeet, the Endangered Grey-cheeked Parakeet and the Ecuadorian subspecies of Red-lored Amazon, often called Lilacine Amazon. 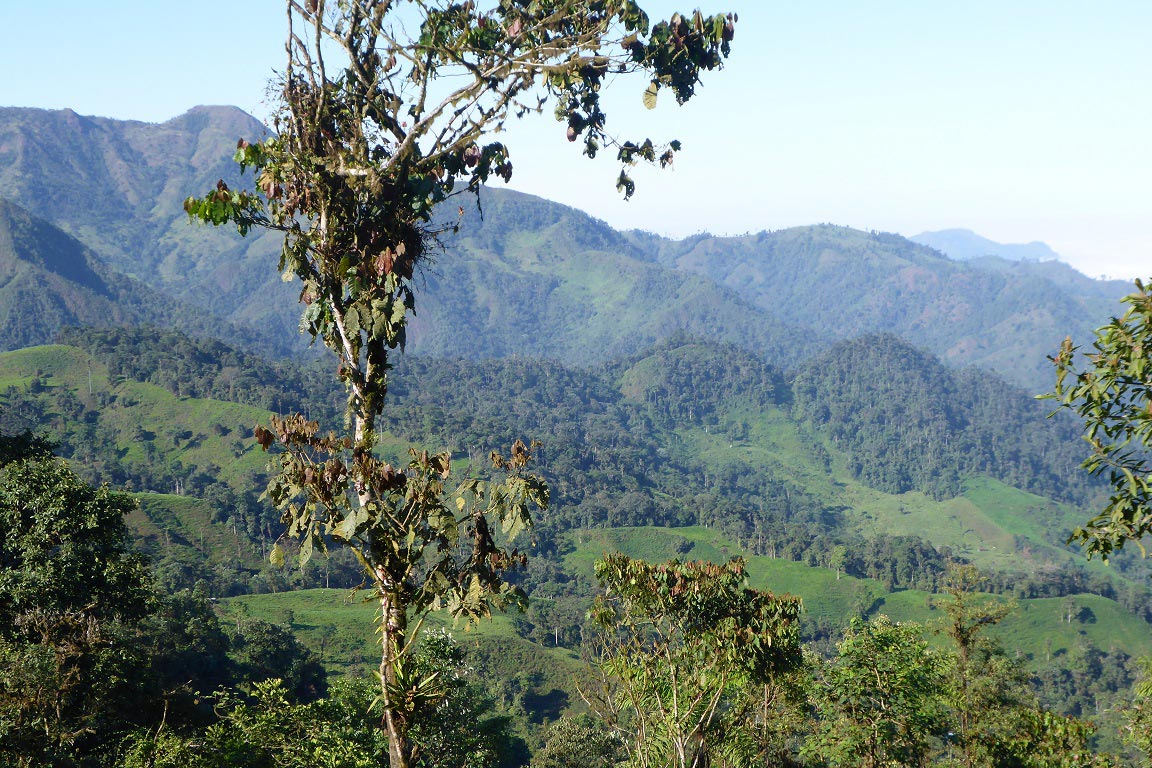 The project is monitoring the main markets for parrot trade on the Ecuadorian (Huaquillas market) and Peruvian sides of the border. Recently it seems that one tragedy has suppressed, at least temporarily, another. In Huaquillas, the project has reported a high presence of police and military at the border due to the massive migration of Venezuelans fleeing their own country. This appears to have drastically decreased the amount of illegal traffic in birds compared to previous years. On the Peruvian side things are different, however, with the incidence of cages and exotic species of birds more common.

The good news is that in the first half of 2019 the project did not find in trade any of the above-mentioned parrots. But the monitoring needs to be extended because reports have been received that local people in the north of El Oro Province have started illegal trafficking as a way to make extra money. Historically El Oro Parakeet appears not to have been traded and was not found in captivity. A recent exception is one rescued individual being kept with permission from the Ecuadorean Ministry of Environment. This is the first step to establish a rescue, breeding and release programme for El Oro Parakeets, and more information will eventually become available.

In terms of making El Oro Parakeet more visible to people, Piñas, the town closest to the Buenaventura Reserve, has long had a large statue of an El Oro Parakeet located at a road junction in the town. Later, along came 'Pirri', a cartoon representation of the bird, used extensively in the project's educational materials, including a storybook for young people about the parakeet. This year a new project mascot, 'Pericles', was presented in schools with the aim of helping the children better understand the importance of protecting endangered parrot species and places in which they live. By investing more in education materials, the workshops in schools and communities will have more impact and the children will better remember the message of the consequences of illegal pet trade and the significance of saving these species. 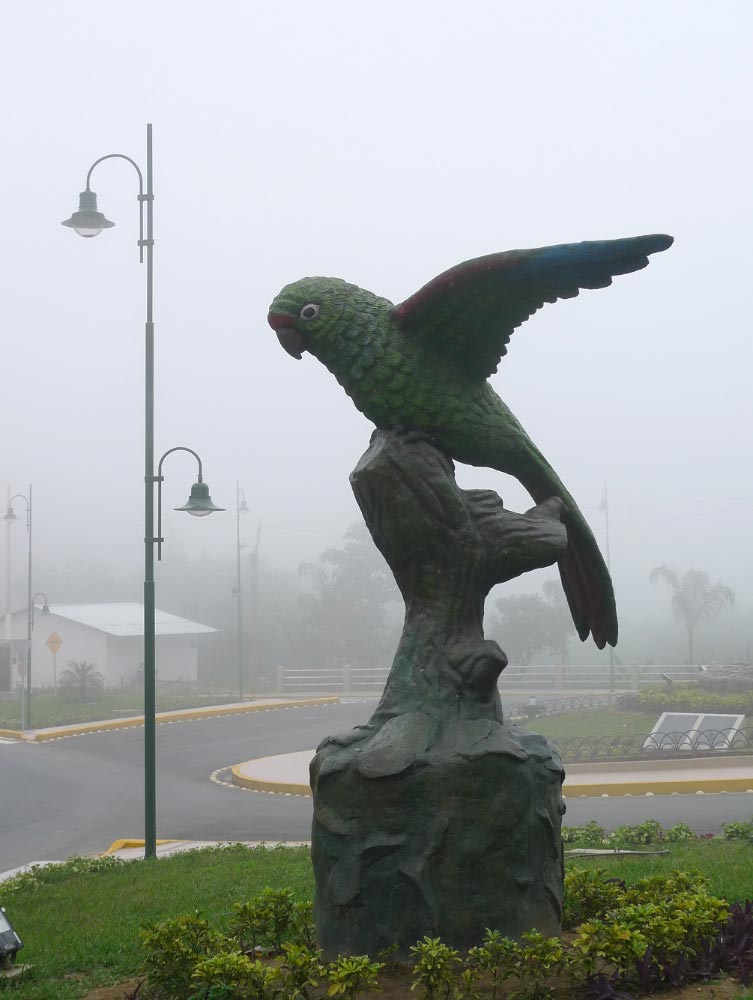 The statue of an El Oro Parakeet in the town of& Piñas (M Juia).

With the official declaration of the El Oro Ecological Corridor expected in the coming months, the project plans to collaborate with the National Institute of Biology (INABIO) to produce El Oro Ecological Corridor, a book that will include information about the Buenaventura Reserve and the survival of El Oro Parakeet. The Megadiverse Province of Pericles (La Provincia Megadiversa de Pericles) magazine will also be distributed throughout the corridor.

In partnership with INABIO, the project is developing a management plan for the Ecological Corridor. Contributing to the plan will be information gathered from monthly monitoring by the project team of 32 previously established observation points along the Buenaventura elevation gradient. Where new El Oro Parakeets are observed, nestboxes continue to be installed to provide additional nesting cavities and increase the local populations. Like his Athenean namesake, the project hopes that its own Pericles will have a lasting positive legacy.