St Valentine's Day is traditionally the time when birds start to choose their mates, with egg-laying for most resident species commencing in March or April. For a handful of birds, including Tawny Owl, Mistle Thrush and Dipper, nesting may already be under way in February, but numbers of these three early breeders are falling rapidly, according to the British Trust for Ornithology's BirdTrends report, published on-line on Thursday [13th February].

Without volunteers, we would know almost nothing about the population trends of the UK's birds. The five thousand BTO surveyors who head out into the countryside each year to count, ring and monitor nests not only tell us which species are in decline, but also help us to find out why the numbers are dropping. The amount of information they record is vast, but accessible summaries for all species monitored are available to everyone in the on-line BirdTrends report, which is updated each year. The report is a handy source of key information, highlighting the consequences for birds as climate and habitats change.

The losers include several species that breed in February, and there are likely to be far fewer eggs laid in the UK this month than there would have been just 25 years ago. Numbers of Mistle Thrush, often the first breeding species recorded in the press each year, have dropped by 44% in this time. Data from bird ringers for this iconic species of woodland and orchards suggests that falling survival rates are the cause. 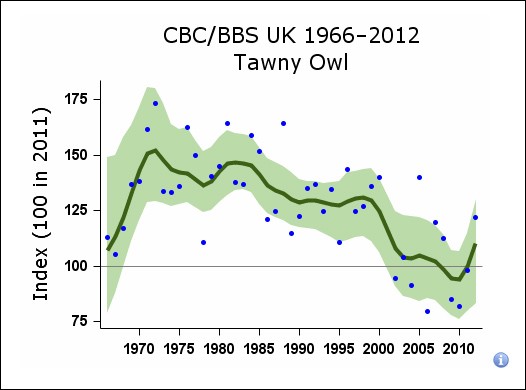 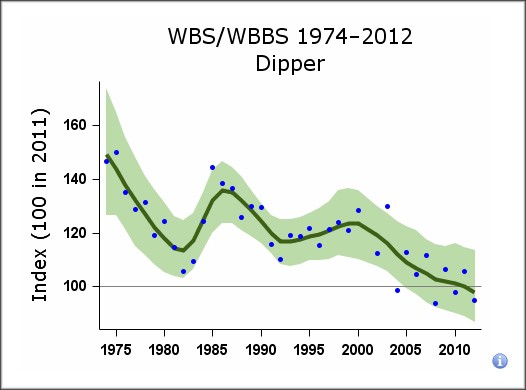 The above graphs for Tawny Owl and Dipper illustrate gradual declines in population since the 1970s. Much more information, including demographic trends, can be found at www.bto.org/birdtrends.

The Tawny Owl is a widespread bird of woodland, parks and gardens, known for its distinctive 'twit-to-whoo' call. However, the survey results published in BirdTrends indicate that, despite an increase in the number of chicks produced per nest, almost a third of Tawnies have disappeared over the last 25 years, suggesting that the wavering hooting of the male birds is becoming a less familiar sound.

The picture for the Dipper, a species that breeds along fast-flowing streams and rivers in upland areas, is broadly similar. The size of the population has fluctuated over the last 25 years but overall numbers have fallen by 26% during this period. Dippers are very sensitive to river pollution and this may be a factor in its decline.

John Marchant, a senior author of the BirdTrends report, commented: "The report is based on the latest data gathered by the thousands of volunteers who contribute to BTO-led surveys. It covers 117 species, providing a key information source for trends in population size, breeding performance and survival rates, as measured by eight long-term monitoring programmes. This broad-based approach gives us unique insight into the underlying causes of changes in bird populations."