Nepal: birding to base camp

The Himalaya region, with its chain of high peaks, pristine glacial valleys and difficult terrain is a lure for many mountain climbers and hikers from around the world. The challenges are great and not without risk, though a huge sense of achievement is had from summiting some of the world's highest peaks. In addition, among the snow-capped peaks and the wooded valleys below, hide a whole range of exhilarating birds and other wildlife which lure in birders hoping to set eyes on these mouth-watering species.

From a personal view, birding within mountain ranges has always brought with it the most exciting wildlife experiences; not only is the scenery spectacular (as was clearly the case during this trek), the species found over differing altitudes can be extremely varied over a short space of time, so an invitation to hike up to Everest Base Camp was a fairly no-brainer decision, not only for my love of mountain birding, but also my longing fascination with Mt Everest itself! 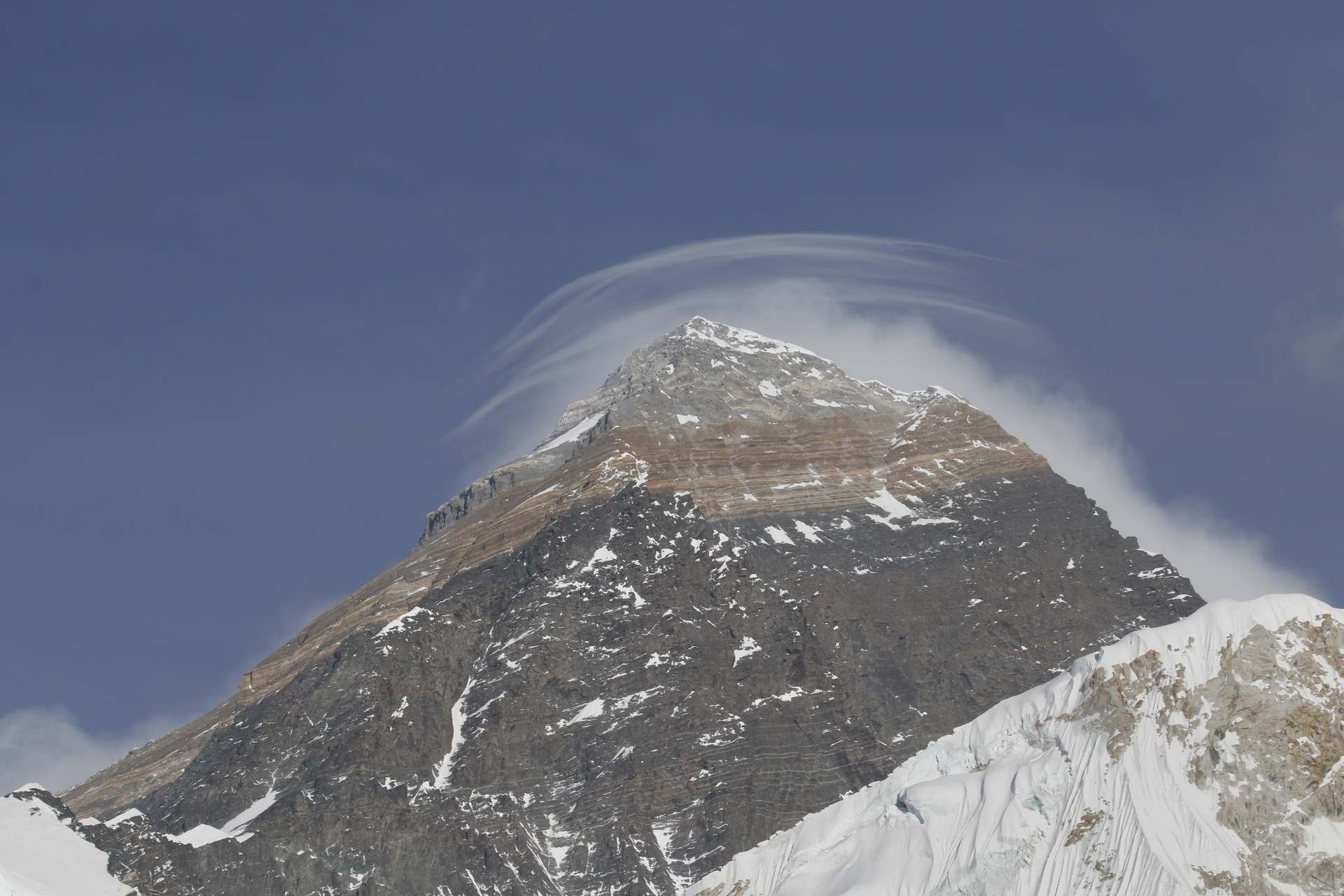 Huge and imposing: the peaks of Mount Everest (Matt Eade).

The popularity of trekking to Everest Base Camp has increased twofold over recent decades, as hikers and general tourists alike surge up the single track along the glacial Khumbu Valley. March onwards sees the height of the trekking season, so it was a relief that my trip was in February and resulted in our group being only one of two on the entire ascent – a climb that takes a minimum of eight days!

Two of the major issues with trekking in February are the extreme temperatures and increased chances of heavy snowfall. We encountered both, especially the former where on most nights the insides of our windows froze up (and don't even mention the lack of hot showers), while heavy snowfall was only encountered during a 24-hour spell, though it was at 4,500 m!

The soaring temperatures experienced in Nepal's capital city of Kathmandu were short-lived as the next day I was to fly (along with my party of eight other trekkers) to one of the most dangerous runways in the world – Lukla Airport. This small town lies at the lower end of the Khumbu Valley and is the gateway to Everest Base Camp for all hiking or expedition groups. Here we met our donkeys (and later, Yaks) and Sherpas; the former assisted us in taking up our necessities, so I merely had a 10 kg rucksack, my camera and binoculars to carry.

The trek is relatively straightforward: one well-trodden path that passes through many villages and often traverses the river valleys by a series of 'bridges'. The starting point is around 2,500 m and you trek to over 5,000 m, where in my opinion, there are five arduous climbs to tackle, while the rest is a modest slog uphill.

A cherished moment was walking out of Lukla – Olive-backed Pipits aplenty around the airfield – and through the archway that signified the beginning of the trek. Almost immediately, Yellow-browed Tits, Green-tailed Sunbirds and posing Blue-fronted Redstarts were admired, Snow Pigeons spiralled in packs overhead and the glacial rivers below held countless Brown Dippers and striking White-capped Redstarts. 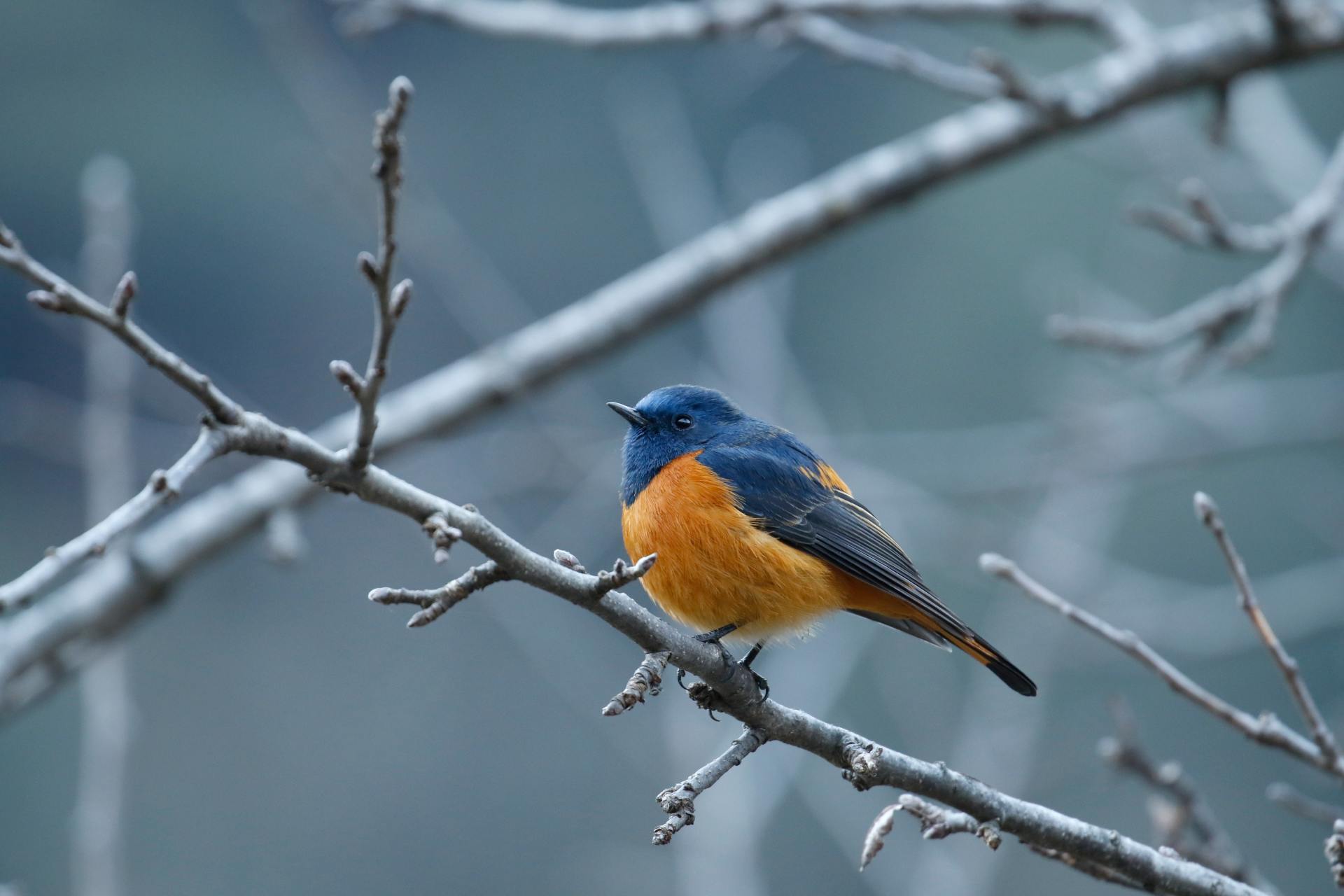 The boldly coloured Blue-fronted Redstart was admired right at the start of the trek (Matt Eade).

I was the only birder in the group and would often hang back, and although I was always playing catch-up, this paid dividends on my first day when a spectacular Fire-tailed Myzornis showed for a short time. This Himalayan gem is a scarce encounter in the Khumbu Valley and proved to be one of the highlights overall.

My first morning – like every morning – was spent getting up at first light and walking the path before anyone else (hikers and villagers) had emerged. Despite the extremely cold temperatures, Black-faced and Chestnut-crowned Laughingthrushes were always hopping along the paths, Himalayan Bluetails fidgeting in the hedges and energetic parties of Black-throated Bushtits swarming through the trees.

As the sun finally rose – enhancing the reflections of the snowy peaks above – Himalayan Vultures soared along the ridges, soon to be cast aside when the first of a few Bearded Vultures cruised by alongside. My first of a few Wallcreepers was, as always, a wonderful sight, while Streaked Laughingthrushes, White-browed Fulvettas and Rufous Sibias proved numerous in the lower reaches.

The first steep climb up to Namche Bazaar prompted a rapid change in both altitude and flora that would produce new species. Being a fit and young(ish) lad, I was many paces ahead on the icy track, and with evergreen trees now dominating the hillsides, the first pheasants were soon encountered, these being two Kalij Pheasants. Soon though, it was another pheasant that was to steal the glamour, Himalayan Monal – Nepal's national bird! With myriad vibrant colours to its plumage, even in the darkest understorey this large ground-dweller was hard to miss as it strutted about among the pine needles and wowing all those who saw it … even non-birders can't ignore this beauty.

Just around the corner, and at an altitude of 3,500 m, sits the mountainside town of Namche Bazaar, our base for two nights, which included an acclimatisation day. As always, each morning I would abandon my fellow trekkers and go in search of new birds that were either within or on the outskirts of town. Despite each morning witnessing -10 degrees Celsius, such avian delights comprised a superb White-collared Blackbird, many Altai Accentors (the first of four accentor species), a tree-climbing Wallcreeper and plenty of noisy White-winged Grosbeaks, whose calls echoed around the serene mountain landscapes. 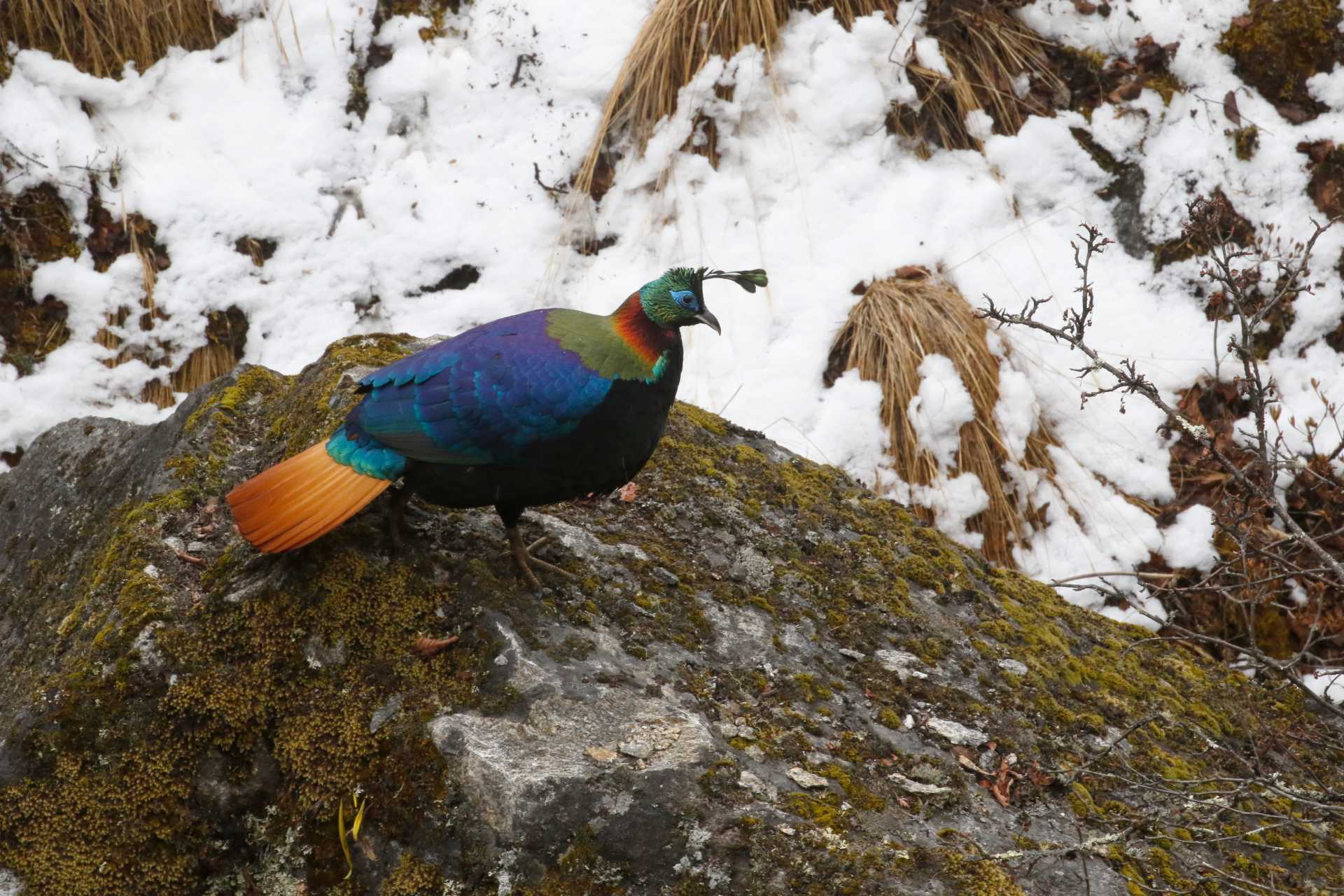 With is vibrant plumage, male Himalayan Monal – Nepal's national bird – is unmistakable. It is native to the Himalaya range (Matt Eade). 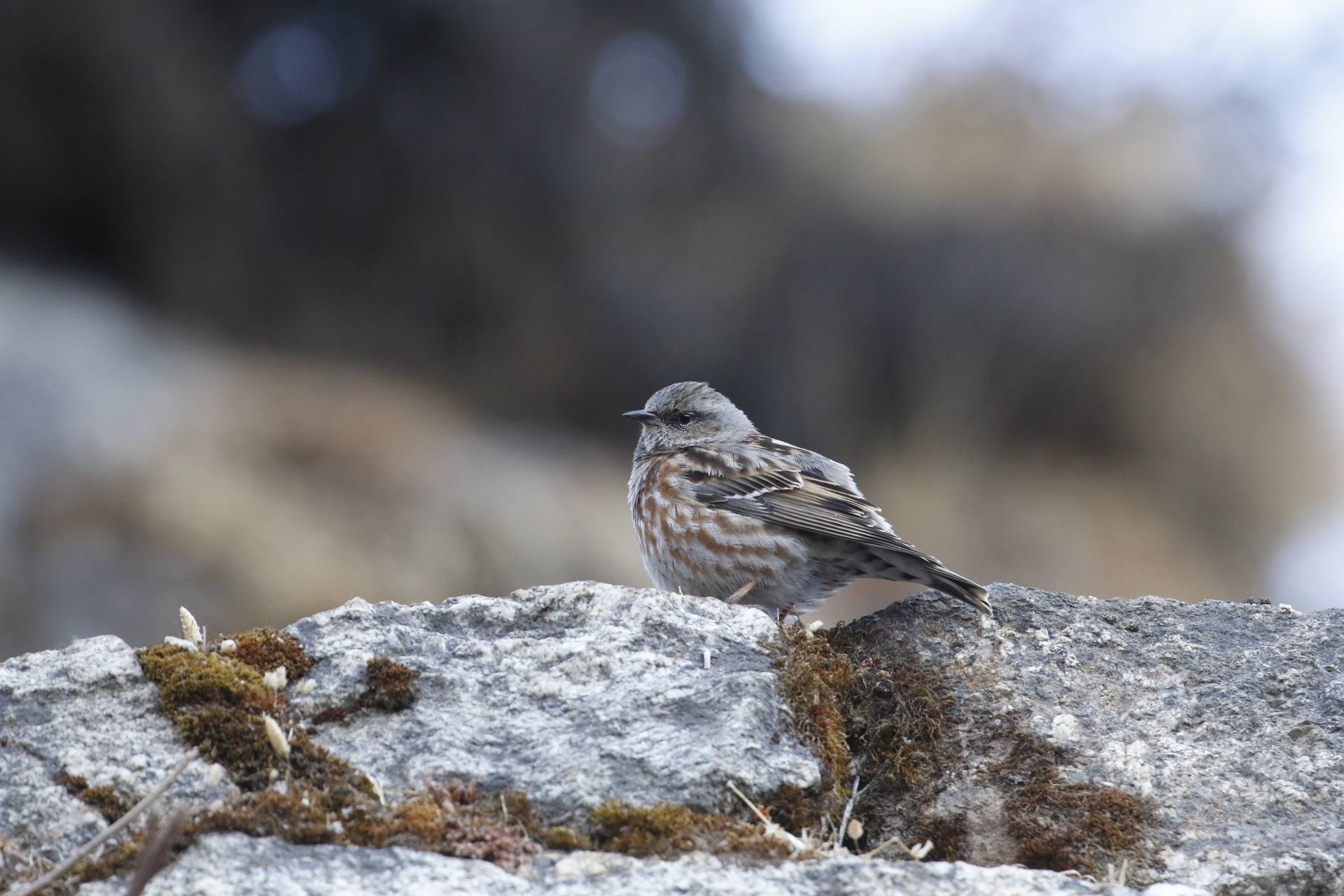 Altai Accentor is a winter visitor to the Himalaya range. It was one of four accentor species encountered (Matt Eade).

Our day of acclimatising was spent walking up to a viewpoint above the arena-shaped town of Namche where, for the first time, we laid eyes on Mt Everest – an awe-inspiring moment if ever there was one! Even at this altitude, my breath was taken away as for years Mt Everest has been a major fascination of mine. However, it was still very much in the distance, so the next day we were off again and trekking the mountainside path to Debuche, passing the famous monastery at Tengboche. Although this is only a 400 m increase in altitude, getting there meant hiking up a couple of severe climbs as we descended into the valleys below, only to ascend sharply.

As the day was, for the most part, along the treeline, vast tit flocks containing both Grey Crested and Rufous-vented Tits and skulking Red-billed Leiothrixs were encountered among the fragments of yet-to-flower Rhododendron 'forests'. Perhaps the most surprising sighting, though, was a female Hen Harrier circling down the valley, dwarfed by the omnipresent Himalayan Vultures.

The redstarts are, as we know, a striking family, and this is no different in the Himalaya, with perhaps the smartest of all – White-throated Redstart – now proving conspicuous in among the boulders that lined the hillside. Descending from Tengboche Monastery, I got somewhat excited by a party of Red-headed Bullfinches just off the path and nearly sunk into the snow – my Sherpa kindly pulled me out afterwards!

From the end of this tortuous day, we would say farewell to any trees. This inevitably led to fewer birds being present, although another host of new species was looming – some of which I had not anticipated. Güldenstädt's Redstart, Red-throated Thrush and Tibetan Snowcock were just some of the surprises that greeted me at our next acclimatisation day at Dingboche (4,500 m). Expected species were numerous Robin Accentor and Rufous-breasted Accentors, many Black-throated Thrushes, Plain Mountain Finches and Himalayan Beautiful Rosefinches, all making use of the scant riverside vegetation and unfrozen patches of open ground within the small town. 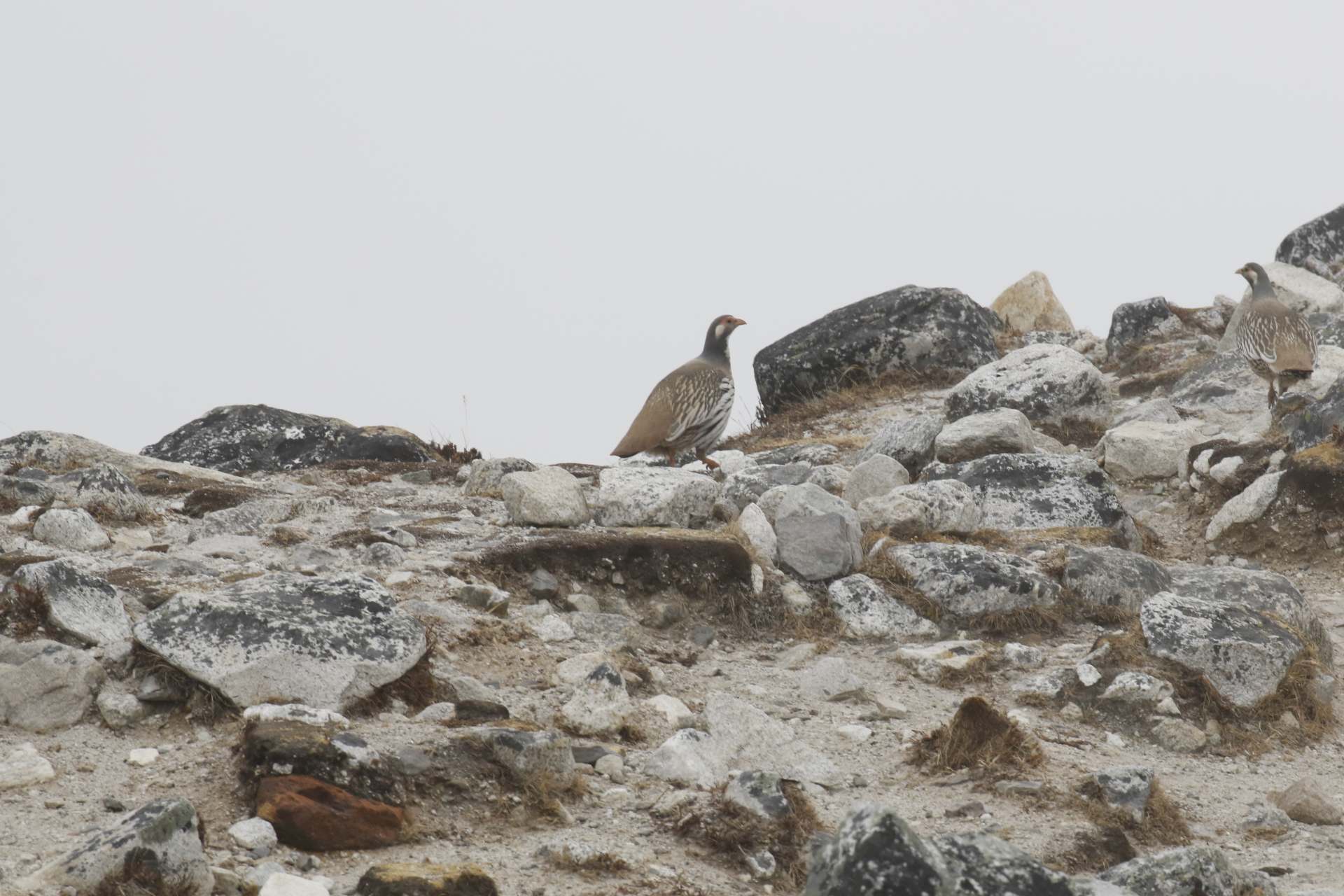 Tibetan Snowcock was a surprise find at 4,500 m in the Sherpa village of Dingboche (Matt Eade).

It was clear from this point forward that most birds would be around the few settlements that lay ahead, especially as the vegetation had now disappeared. Other than sightings of Tibetan Snowcocks and Shore Larks, bird activity dropped considerably, although this did mean I could focus on the sharp ascents.

Only 27 hours (but 27 km) had passed since leaving Dingboche, though now we were situated at well over 5,000 m at the town of Gorak Shep, the last stop before the final push to Base Camp. This tiny settlement attracted many birds of varying sizes: Alpine Chough, Brandt's Mountain Finch, Great Rosefinch, Hill Pigeon, Alpine Accentor and, most surprisingly, a Crimson-browed Finch were all found around the lodge. 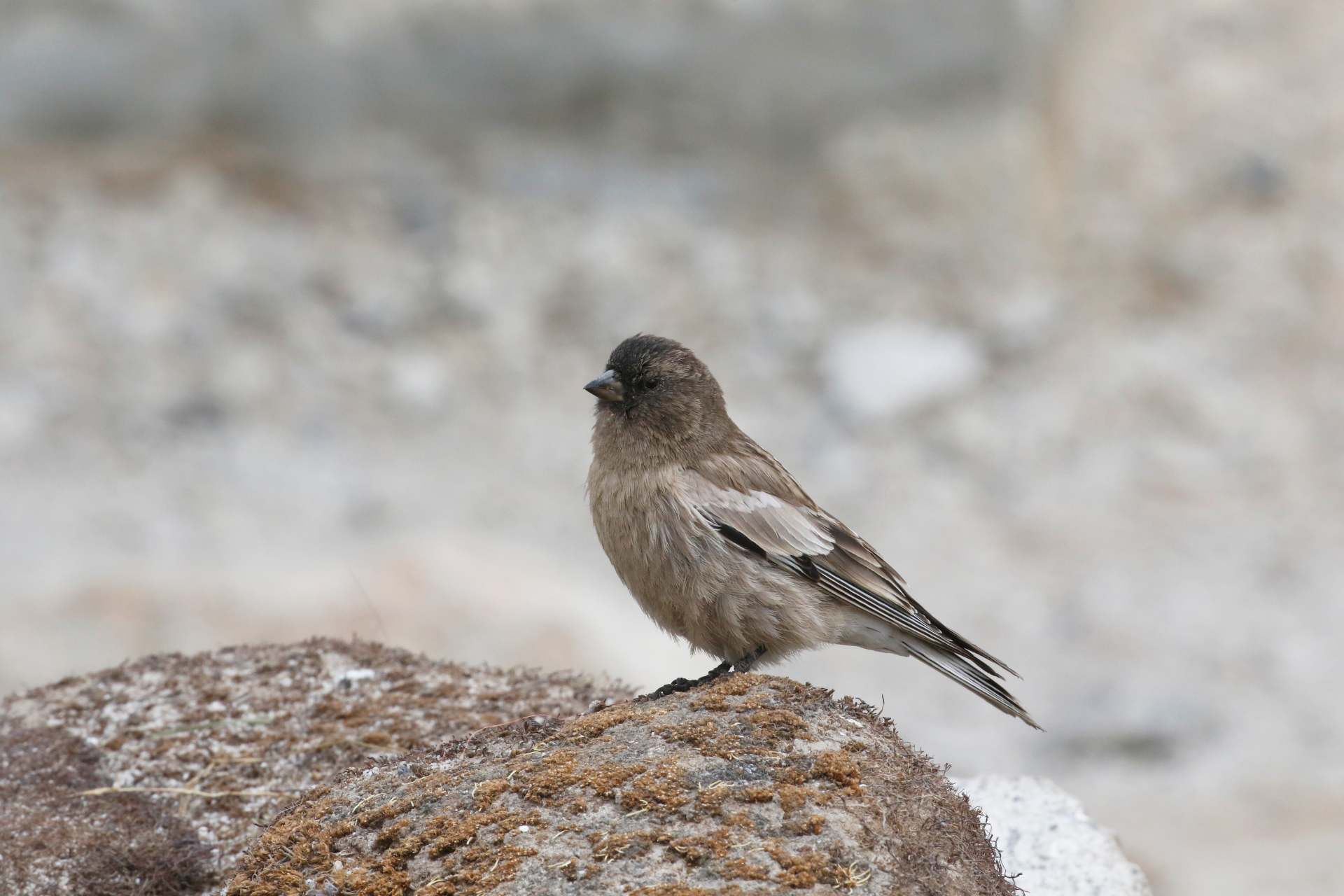 From here on in, though, not a single bird was seen up to Base Camp, so it was all about the incredible experience. Recent rockfalls or avalanches made the journey that bit more difficult, but sure enough, we arrived at 5,400 m. One by one, we emerged at Base Camp, shadowed by the peaks of Nuptse, Lhotse and, just beyond, Everest itself. Pure joy was shared among the group, many photos were taken and some of us carried on that extra touch further to observe the icebergs below the camp before retreating back to our base for the night.

So that was that, goal achieved, and with predicted incoming weather, we had only three days to descend to Lukla; this included a rapid descent from Namche Bazaar to the initial starting point. Heavy snowfall wasn't ideal for birding; however, once settled, the snow initiated the more elusive birds to show better – this relevant to a small party of Blood Pheasants that were picked up by their calls as they tip-toed around the snow-covered floor of the Rhododendron forest. Himalayan Monals, however, dominated the outskirts of Namche, as not only were displaying males seen, but an unexpected flock of 14 birds was an unthinkable sighting. 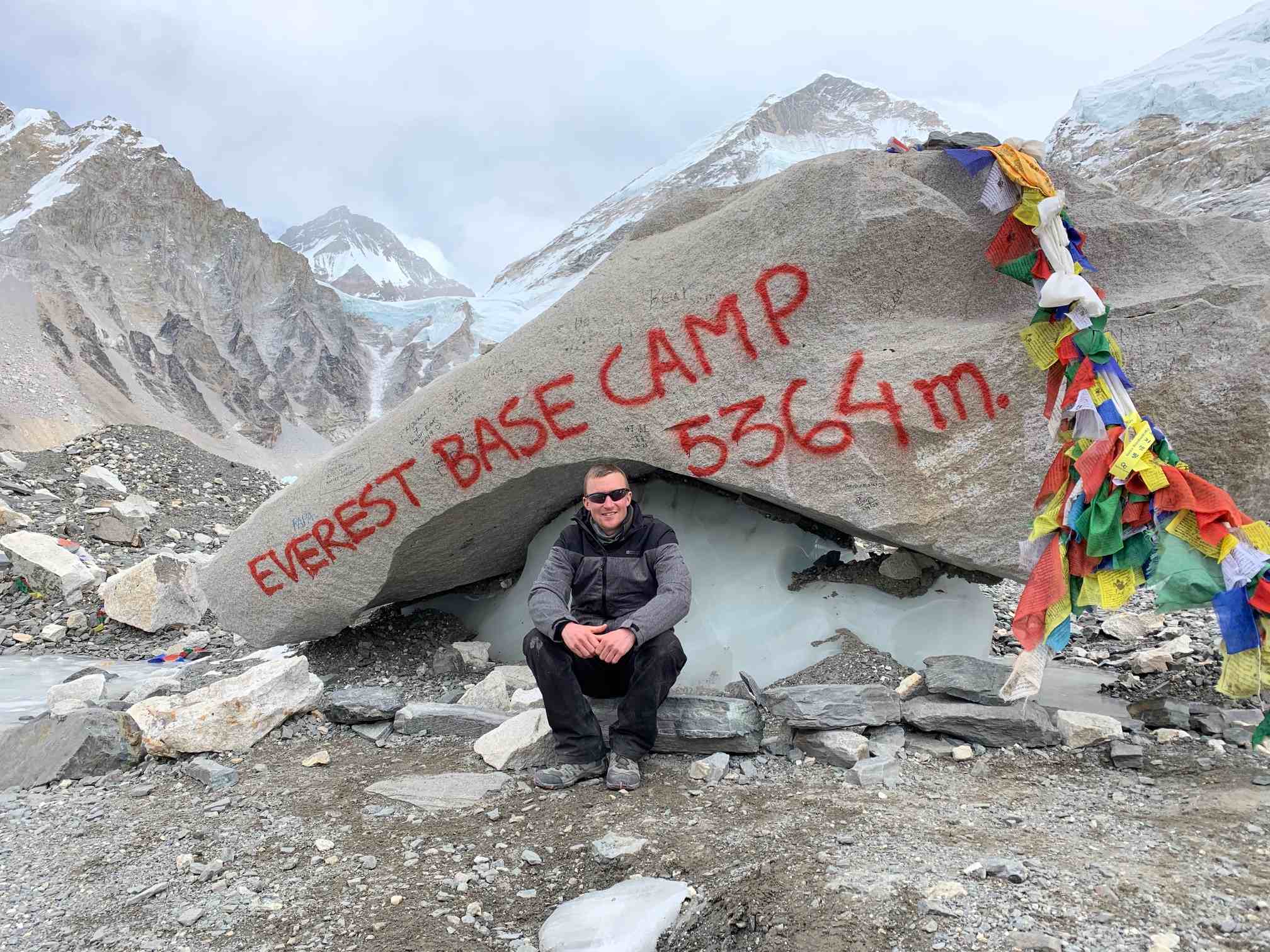 The author celebrates reaching Everest Base Camp, as well as managing an excellent haul of montane birds (Matt Eade).

Further down the valley, there was now a hive of bird activity, more so from when we ascended the lower regions, relating perhaps to the warmer temperatures of early spring. Dark-breasted Rosefinch, Green Shrike-babbler, Spotted Laughingthrush, Yellow-billed Blue Magpie, Hodgson's Redstart, White-browed Fulvetta and many leaf-warblers meant, from a birding perspective, that the final day of trekking was one of the most productive.

The gateway – and the finishing line – to Lukla had now been passed, the first beer for many days had been sunk and the first hot shower for however how long was had. This momentous birding hike was over!