Mutual communication between honeyguides and humans

New research, published in Science, illustrates that the relationship between Greater Honeyguides and humans is much closer than previously thought.

Greater Honeyguide, a widespread resident of sub-Saharan Africa, is known for its ability to lead honey-seeking humans to wild bee nests, which in turn benefits the bird with opportunities to feed — humans will destroy the nest, remove the honey and leave the remnants behind on which the honeyguides gorge themselves. This co-operation is a rare example of a mutualistic foraging partnership between humans and free-living wild animals.

However, as Dr Claire Spottiswoode and her team were to discover, the intricacies of the human-honeyguide partnership run somewhat deeper than this. Not only do honeyguides give a specific call to attract people's attention, but humans seeking the birds' help are also able to attract them by giving specialised acoustic signals — which in turn the birds recognise and associate with honey-hunters requiring their guidance — resulting in a rare two-way communication between humans and wild birds. 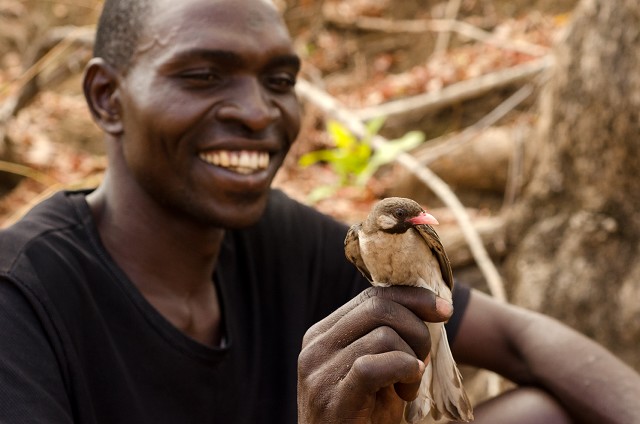 With the assistance of honey-hunters from the local Yao community, Dr Spottiswoode carried out controlled experiments in Mozambique's Niassa National Reserve to test whether the birds were able to distinguish the specific call from other human sounds, and so to respond to it appropriately. The 'honey-hunting call' made by honey-hunters, and passed from generation to generation, is a loud trill followed by a short grunt: 'brrr-hm'.

To discover whether honeyguides associate 'brrr-hm' with a specific meaning , Spottiswoode made recordings of this call and two kinds of 'control' sound: arbitrary words called out by the honey-hunters and the calls of another bird species. When these sounds were played back in the wild during experimental honey-hunting trips, birds were much more likely respond to the 'brrr-hm' call made to attract them than they were to either of the other sounds.

Spottiswoode explained to Phys.org: "The traditional 'brrr-hm' call increased the probability of being guided by a honeyguide from 33 per cent to 66 per cent, and the overall probability of being shown a bees' nest from 16 per cent to 54 per cent compared to the control sounds. In other words, the 'brrr-hm' call more than tripled the chances of a successful interaction, yielding honey for the humans and wax for the bird." 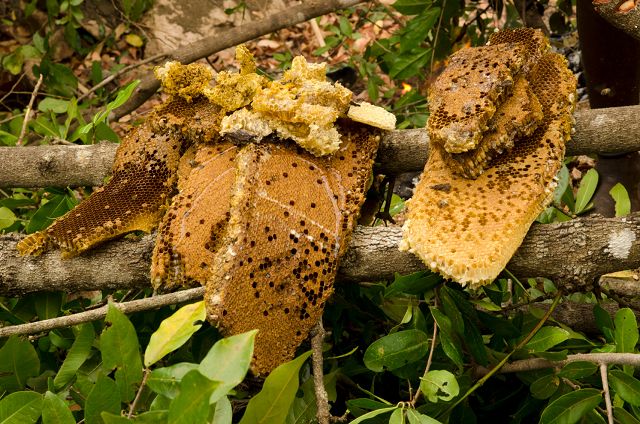 Honeyguides are left to feast on the ravaged bee nests once the honey-hunters have harvested the honey. (Photo: www.africancuckoos.com)

This is the first study to provide clear evidence that honeyguides respond to such specialised human signals, and that the birds associate those signals with potential personal benefits. Interestingly, there is evidence that the signals used to successfully summon honeyguides varies across Africa — for example the the Hadza, a hunter-gatherer group in Tanzania, use a melodious whistle.

What remains unclear is how young honeyguides learn to recognise the hunters' calls given that, like cuckoos, they are brood parasites, laying their eggs in the nests of other species. This means that young honeyguides don't have an opportunity to learn directly from their biological parents while at the nest. With traditional methods such as this quickly vanishing across Africa, the opportunities to solve such mysteries are also disappearing.