At 6 pm on 29 April, a message came through on the North Ronaldsay island WhatsApp from Alex Wright. It consisted of a very blurry photo of an unidentified dove sat on the railings by the lighthouse. It had been taken earlier in the day by Helen Galland and she wanted to know what it was.

Dinner was being prepared, drinks were being served and the photo was inconclusive at best, so it was ultimately dismissed as a dodgy picture of a Collared Dove. Thankfully, though, it was at that moment that Pete Donnelly telephoned the Observatory to discuss a 'funny dove' at the lighthouse.

For the first few minutes of the call, I simply assumed that he was discussing the same photo that we’d all been looking at – but then the penny dropped. He was actually at the lighthouse, watching the bird at that moment! Having been working at the lighthouse, Pete had independently come across the dove and not yet seen the photograph on the island WhatsApp group.Things became a bit more urgent as he described it as "definitely not a Collared Dove" and that it was "too small [for Collared], with wonderful spots on the wings." However, he wasn’t sure exactly what it was.

Enough was enough. I ran into the bar and told Alison Duncan, who was cooking dinner, as well as Toby Green and his tour group. We all bolted out the door and raced up to the lighthouse.

When I arrived, the dove was sat on the grass in front of the café, a mere 10 m in front of Pete, who was lounging against his Land Rover. One look was enough – the small size, attenuated shape, orangey-peach body, shiny, iridescent purple neck patches, pale turquoise eye-ring and the big, black oval patches on the wings that Pete had described – it was a Mourning Dove! 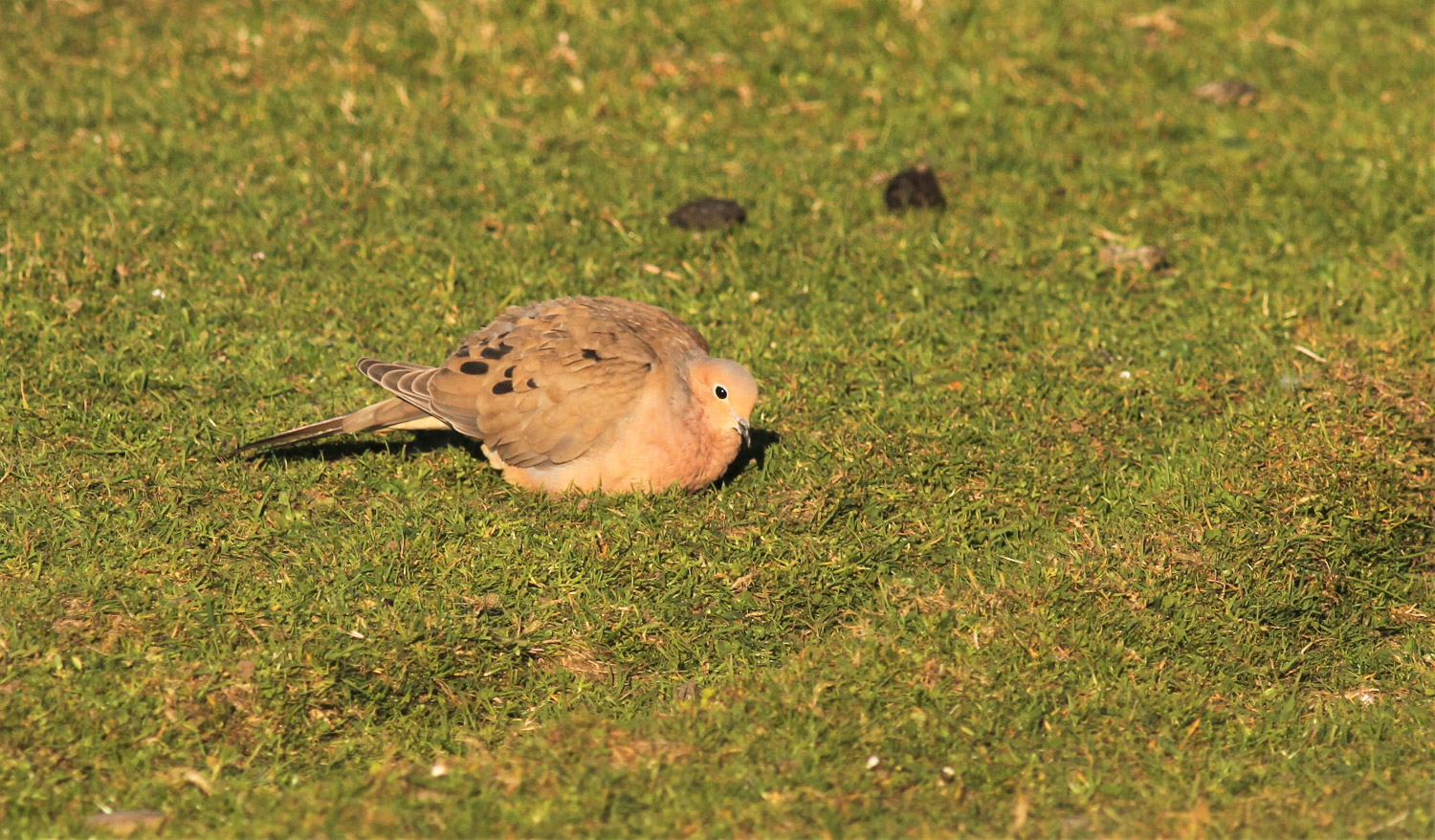 Clearly exhausted, the Mourning Dove barely moved from the same small patch of grass by the lighthouse all afternoon (Simon Davies/NRBO).

Alison, Toby and his birding group were not far behind and we were soon enjoying point-blank views in the glorious evening sunshine, making for an unexpected but brilliant moment after the weeks of south-easterly winds we’ve been having. A Nearctic landbird hadn’t been on our radar but, we surmised, it could have arrived off the northern edge of Storm Hannah which had just swept across the UK, even if we hadn’t experienced any of the strong winds that affected southern areas.

The bird looked tired and unwilling to move anywhere apart from the little square of grass it was occupying. It was right out in the open and exposed; it seemed like it had just arrived after a long flight.

We left after a while to have dinner and drinks, but I returned afterwards with more folk who wanted to see it. This was just before dusk and there was no sign. We searched the area again thoroughly during the following day, but it couldn't be found. Following a clear, calm night, that wasn't entirely surprising, but it seemed so exhausted the previous evening that we hadn't expected it to move on so quickly. It was a fantastic bird that appeared two years to the day after the famous Red-winged Blackbird!

Mourning Dove is one of the commonest breeding species across North America; many are resident, but more northerly populations migrate south in winter. There are four previous occurrences in Britain, with a further three in Ireland and a single record from the Isle of Man. All but two of these have come since 2007. 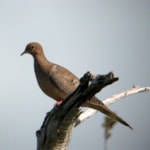