Moths of the season: Currant Clearwing and other clearwing moths

The mid-summer months of June and July should hopefully provide plenty of long, warm and sunny days in which to hunt for perhaps the most charismatic and enigmatic group of day-flying moths: the clearwings. This group of about 15 British species is closely related to the much more visible burnet moths, but clearwings differ greatly from those by their amazing resemblance to wasps, their main form of defence against predators. They differ from wasps in having a black or dark bar two-thirds of the way along the mainly transparent forewing, and their heads are relatively smaller. Even though each species has strongly coloured abdominal bands, and some have colour within the wings themselves, they are virtually invisible in flight to the human eye. So how does one see them?

Plain old detective work needs to be employed to get you at least 'in the zone' for clearwings. Each species usually has only one or two larval foodplants, most of which are woody or shrubby. The larvae feed within the wood or plant stems, often for more than one year. Once the foodplant is located at a site, you have to look for tell-tale signs of larval feeding such as bore holes in cut stumps, exposed roots or branches. If you are lucky you may find recent evidence of frass or exuviae at the exterior exit holes, showing that adults have already emerged this year. With skill or patience you can find very recently emerged adults still close to these exit holes in mid- to late morning before they have warmed up enough to fly away! Many hours of searching may be required before you see anything at all.

This almost sounds like such hard work that you would be better off doing something else! However there is an additional tool, which for some species makes things a lot easier: artificial and commercially produced chemical pheromone lures. Made mainly to aid insect pest control measures abroad, pheromones are now quite widely available at reasonable cost to amateur lepidopterists. Some pheromones attract more than one species, so you do not need 15 different ones to cover the range of British species. The pheromones are impregnated in a rubber bung or white plastic vial, which is placed in a light mesh or muslin bag and hung in or near the moth's foodplant during the warmer parts of the day. The male clearwing is tricked into thinking a virgin female is in the area, much in the same way that female Emperor Moths attract males (see the last Moth of the Month article). 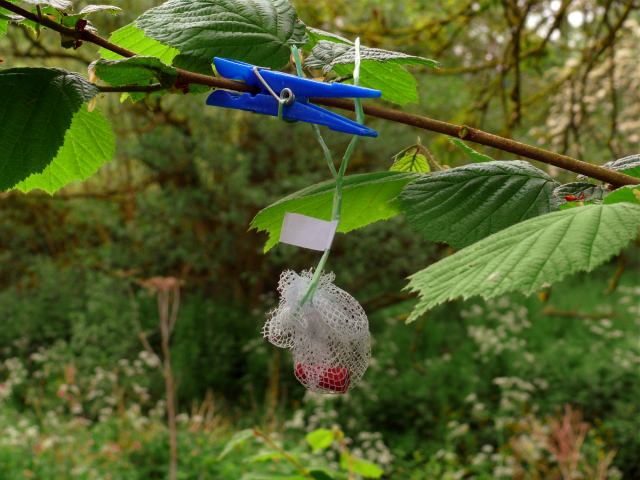 Full or part pheromone lure kits can be purchased from Anglian Lepidopterist Supplies. With this kit comes an 8-page pamphlet explaining how, when and where to use and store the different lures for the best results.

Only one species is classed as nationally common but all are probably very under-recorded due to the problems of finding them. Here are a few hints on how to find some of the commoner ones. 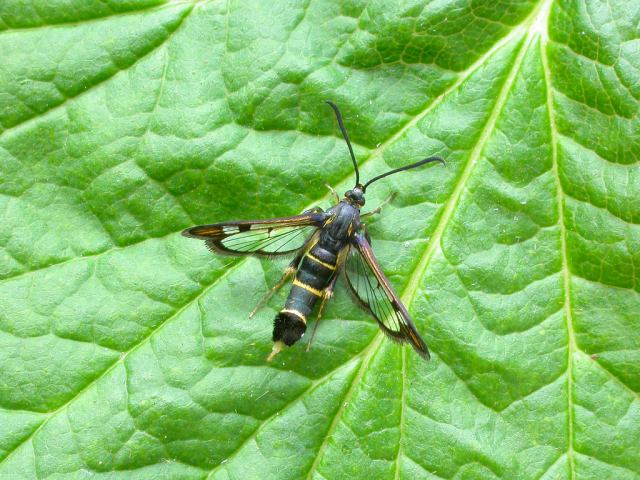 This species is widespread though now declining, but can be found in larger gardens or allotments where cultivated or wild Red or Black Currants are grown. It can be sought by hanging the lure on the branches of the foodplant in June or July in mid- to late afternoon. Some garden centres still have rows of well-established Currant bushes growing on site that can be checked — with the owner's permission of course! 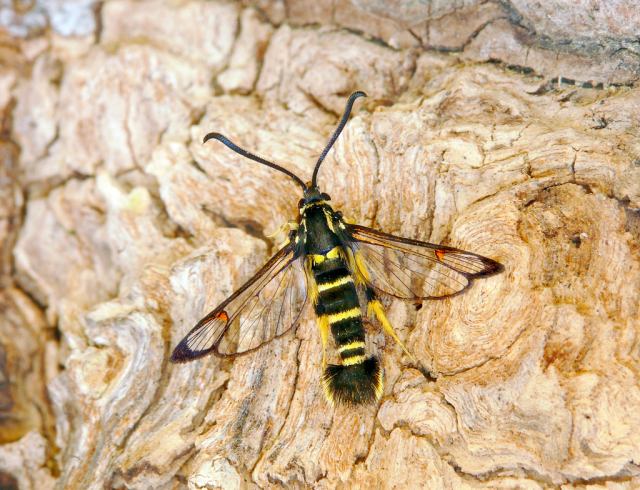 This species is also widespread, mainly on Oaks and other trees in woods, parks and heaths where recent coppicing has exposed live stumps. It flies from late May to August and comes to lure quite readily in the afternoon. It will crawl around a muslin bag enabling easy viewing. 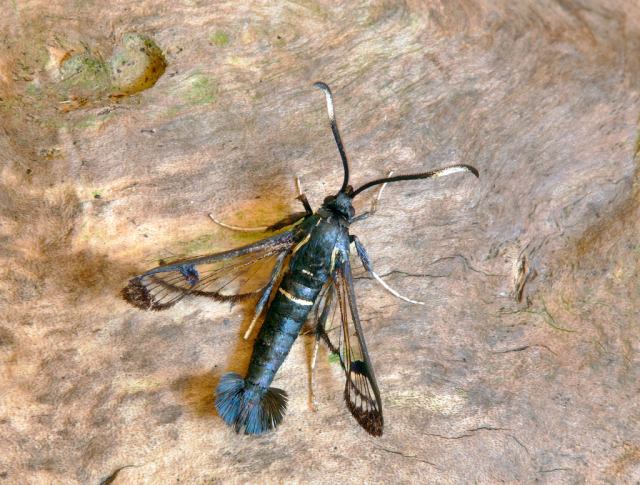 This species can be locally abundant where Alders and Birch grow alongside streams, in damp woodland, mosses and heaths between mid-May and early July. It is a very rapid flier and one has to be quick to get good views. 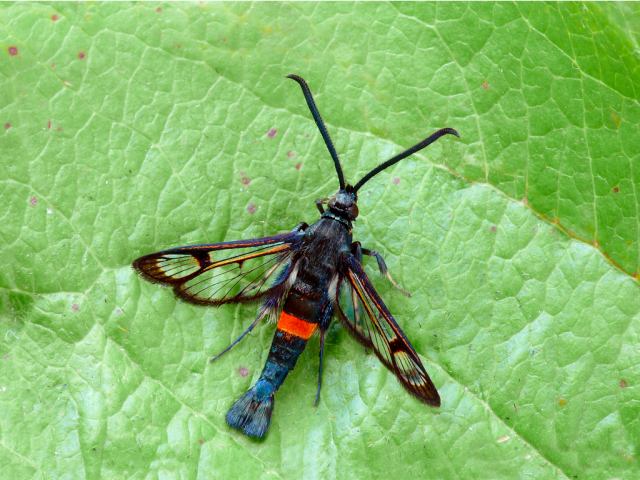 This species' flight period is slightly later — mid-June to August — and it is found on fruit trees such as old Apple and Pear in orchards, and more naturally on Crab Apple in single trees on verges and in larger gardens. It also is a quick flier and tends not to land on the lure but merely investigates it. 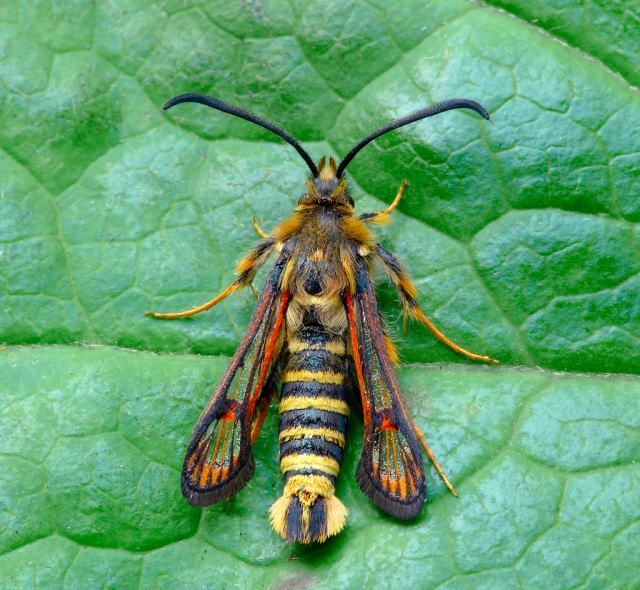 The foodplant of this species is the perennial Common Bird's-foot Trefoil, which can often be found growing in carpets on chalk banks, limestone landscapes and even on brownfield sites in the heart of the Black Country, West Midlands. The plant's presence on site will not guarantee the moth, however. As with all Clearwings, the success rate is incredibly unpredictable even when conditions are apparently ideal.

As yet, there is no available pheromone for use with this species. Traditional stands of old Goat Sallows are the best home for the moth. You can start in the spring by finding old holes near the bases of the trees then re-visiting those sites from early July. Then look for either 'just-about-to-emerge' adults — their heads and antennae may protrude a little from the level of the wood — or the newly emerged insects still 'warming up' only inches from the exit hole.

Hornet Moth does now have an available lure and the bases of mature Black and hybrid Poplars need to checked from mid-June right through July. 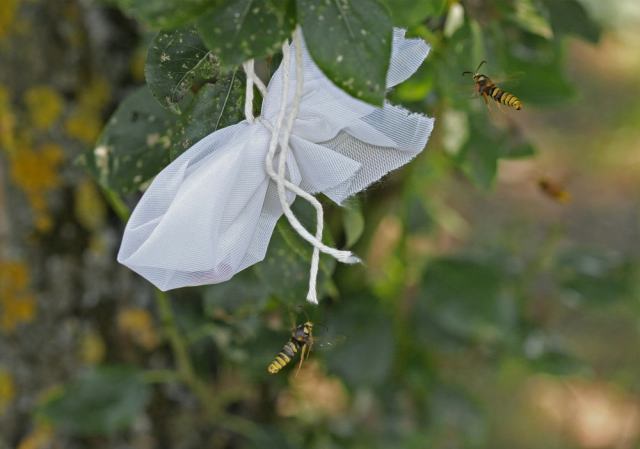 Even with the help of pheromones, finding clearwings can be hugely time-consuming, frustrating, and often disappointing. However this is soon forgotten when at last you see the fabulous live adult moth. Patrick Clement, who has kindly provided the images of some adult clearwing moths here, has set up an online discussion group for pheromone users. Please apply by email direct to Patrick if interested, with a short description of who you are and why you want to join. Please note that this group is for general feedback on the success of using pheromones for clearwings and other moths, and does not encourage users to highlight the whereabouts of the scarcer species.

If you do go looking for clearwings I would be happy for you to post comments of your results below or with the Pheromone Discussion group. And the best of luck — you will probably need it!

Thanks again to Patrick Clement for providing images, feedback and an invitation to BirdGuides readers to join the Pheromone Discussion Group.