Moths in special habitats: The Brecklands

In the second of this series we looked at interesting moths in 'southern heathlands' and this month we again revisit heathland, but this time a very specific type: The Brecklands.

Breckland is a gorse-covered sandy heathland habitat found only in northwest Suffolk and southwest Norfolk. The word 'Breck' is medieval and described an area of heathland broken up for cultivation then allowed to revert to wilderness. The Brecks remains very much a mosaic of agricultural land, plantation and heath. They are bordered to the west by the Fens and to the northeast by the Norfolk Broads, and their unusual flora and fauna are of considerable interest. The heaths are still dominated by Scots Pine. Climatically the Brecks are one of the driest places in England, and the plateau is underlain by limestone and covered with thin layers of sand and flint. The area of Breckland was substantially reduced in the 20th century by modern farming and the creation in 1914 of Thetford Forest. However, substantial areas have been preserved, not least by the presence of MoD property such as the Stanford Army Training Area and the famous RAF Lakenheath base.

Much of the Brecks is owned by the Forestry Commission (FC) and the National Trust (NT). Some very special habitats are owned and managed by the Norfolk and Suffolk Wildlife Trusts, including the famous Weeting Heath NWT and Wangford Heath SWT reserves. There are miles of bridleways, public footpaths and many general open-access areas across much of the Brecks, making it an ideal place to look for day-flying moths such as The Forester, Six-spot Burnet Moth, Hornet Moth, Oblique Striped and Broad-bordered Bee Hawkmoth.

In recent times the FC have endeavoured to return areas of conifer forest to natural heath. Other more specific conservation projects have involved purposely disturbing special plots of dry bare ground to promote floral blooms, which are of great benefit to very rare species of moth such as the Grey Carpet and the micro Basil Thyme Case-bearer, as well as the Dingy Skipper butterfly. The 'Heathland Restoration for Threatened Butterflies and Moths' project instigated by Butterfly Conservation and now funded by Wren Biodiversity Action Trust is in its second full year. Sharon Hearle has led the project and found that both rotating and turf stripping techniques help to promote plants such as Flixweed, the food plant for Grey Carpet. It is hoped that this process can become an integral part of long-term Breckland management.

The best way to see the huge range of nocturnal moth species that occur in the Brecks is to attend some of the regular Suffolk Moths Group public meetings, which take place in the Brecks at least monthly between May and September each year. The Norfolk Moth Survey has a smaller programme of public events which occasionally involve a Breck venue. West Stow CP normally has at least one open public event a year.

Some of the best open Breckland sites for moths include:

Most of the best Breckland sites are owned or managed by the Norfolk or Suffolk County Wildlife Trusts, The Forestry Commission, The National Trust or local councils, so always make sure you obtain permission to run light traps if thinking of doing an independent nocturnal moth survey. As some of the larger open heaths and warrens are quite exposed, it can remain rather cool at night even in summer and wind can be a problem at any time of the year. Some of the commoner heathland moths featured in 'southern heathlands' can also be expected at similar times of the year in The Brecks.

Early in the season, stands of Wild Privet can be checked with strong torches for an outside chance of Barred Tooth-striped, which still occurs at one or two sites. An April visit could produce Oblique-striped, Broom-tip and first-generation Nutmeg. 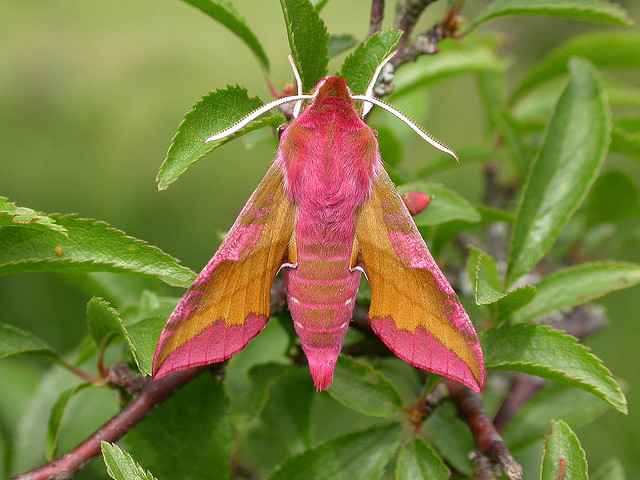 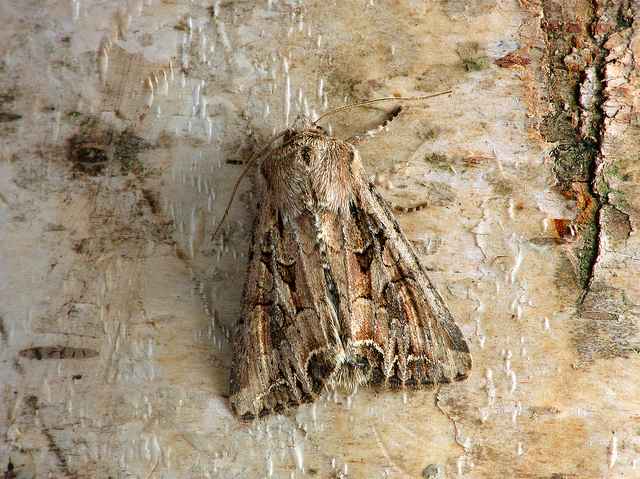 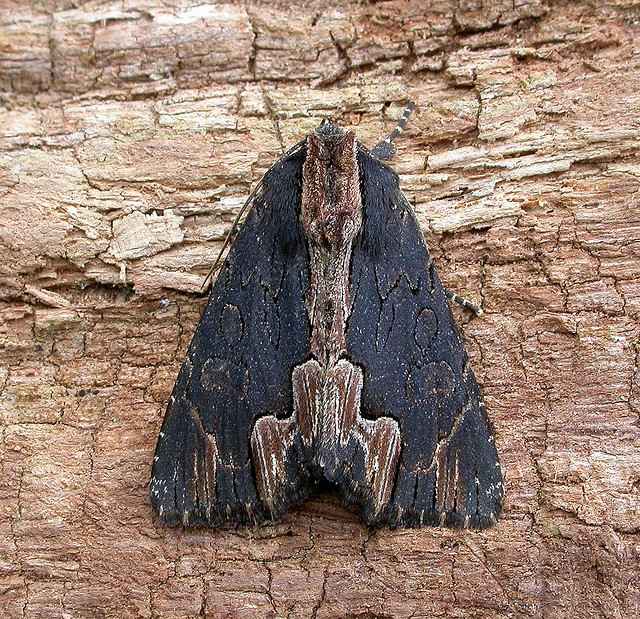 June is perhaps the best month for Breck specialities, with many of May's moth selection still on the wing as the diverse flora approaches its climax. Six-spot Burnet, first-brood Tawny Wave, Royal Mantle, Clouded Buff and the fantastic Marbled Clover can be looked for by day. Freshly emerged Hornet Moths can sometimes be found outside exit holes at the base of Black Poplars before mid-morning and this species also comes to a special pheromone lure.

At night it is sometimes easy to see 200 species on an organised session, with iconic moths such as Goat Moth and Privet Hawkmoth strong possibilities. Others to light may include Wood Carpet, Shaded Pug, Lunar Yellow Underwing and Bordered Sallow. 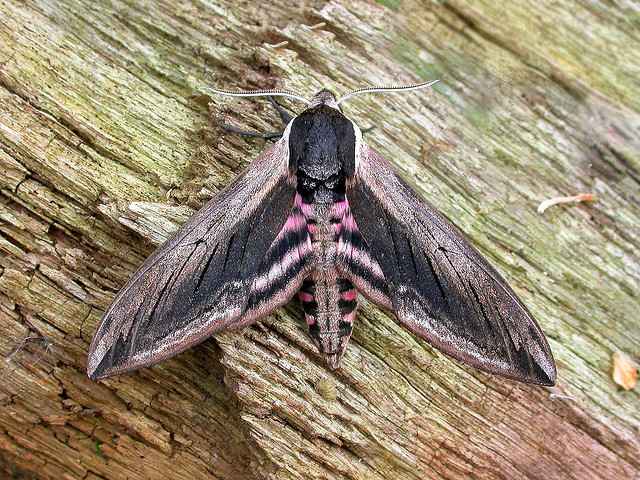 July can bring Buff Footman, White-lined Dart, Archer's Dart, Tawny Shears, Mere Wainscot and Middle-barred Minor. In early August you can look for Square-spotted Clay and many other common moths by checking the flowers of Hemp Agrimony at dusk, on the edge of damp woodlands.

There is a second chance in August for second-brood Tawny Wave and Oblique Striped, while Dusky Sallow and Anomalous are out for the first time. Rush Wainscot can be found on the some of the small wetlands on the north side. From mid-September there is an outside chance of Pale Lemon Sallow to light, if in the vicinity of Black or 'Lombardy' Poplars. The Mallow is a latecomer in October and has a good population in the Brecks. 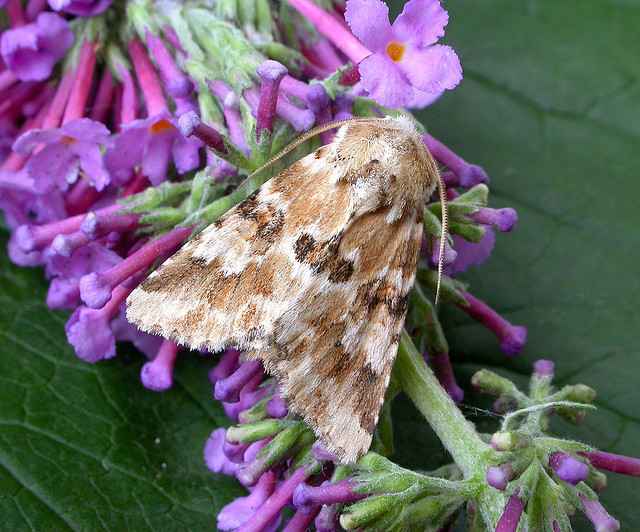 Of course there is also the sad side to the Brecks moth story: several species have been lost, presumably forever, as a result of climate, landscape and vegetation changes. These include the Barberry Carpet, Bordered Gothic, Viper's Bugloss and the amazing Spotted Sulphur.

Let us hope that current and future conservation projects and good management of existing reserves maintain the current high level of moths and butterflies for future generations to enjoy.