Although spring and summer 2011 were rather average for migrant moths in the British Isles, the autumn has been excellent, with the 'Indian Summer' period in late September and October perhaps the most exciting period in the last five years. The majority of records still come mainly from constant-effort sites such as bird observatories and from those lucky enough to have gardens on or near the coast. With modern technology, weather patterns likely to bring about moth immigration are often predicted days in advance, giving those of us who live further inland time to get to a coast and 'get in on the action' as it happens. From looking at recent and historical records, it is obvious that the south coast of England is usually the best place to be. However, the early-summer Small Marbled influx and this autumn's large-scale displacement movement have shown that anywhere can produce records, with some migrant species even getting as far north as the west coast of Scotland.

Convolvulus Hawkmoth, Norchard (Worcs) — perhaps the most obvious long-distance migrant that can turn up anywhere in the UK (Steve Whitehouse).

This article will attempt to highlight aspects of some of the best-known migrant hotspots and also mention a few other secondary areas that have started to show potential and reap dividends in recent years, illustrated with some of the more frequent visitors to our shores.

Ideally one should check online weather forecasts in advance, hoping to spot the classic pulse or plume of warm air originating either directly straight across from the mainland Europe or even better coming up from the Sahara regions of North Africa. Gentle easterly winds can produce a less marked effect down the east coast of Britain, but can be good for Scandinavian and central European species such as Great Brocade and Rannoch Looper. See www.magicseaweed.com or www.wetterzentrale.de, which depict helpful western-European pressure charts.

Dungeness NNR in south Kent is, due to its geographical position, historical track record and ease of accessibility from the motorway system, perhaps one of the first places to consider if hoping to see migrant moths. The Dungeness peninsula has recorded over 600 species of macro moths, which is roughly two thirds of the national total, and over 100 species of Pyralidae. As far as timing is concerned, Dungeness appears to be better as a spring-to-late-summer venue, receiving migrants from the closer near-continent. During these periods the peninsula is also brilliant for a wide range of scarce and rare resident species. The whole area has a large constant effort network shared between the Bird Observatory, the RSPB reserve and several resident moth-ers. It also has plenty of room! Visitors can seek very reasonably priced hostel-type accommodation at the Bird Observatory. The warden, Dave Walker, usually runs two traps when the weather allows and is happy to show residents the highlights of the previous night's catch.

Visiting moth-ers have traditionally put out traps in an area of scrub and shingle next to the road near the Long Pits. There is some shelter here and this area has attracted some amazing records over the years. Dungeness is infamous for its windy weather; try to choose a night of calm or gentle breeze as a stiff northeasterly may totally ruin proceedings.

For visitors who may prefer a more comfortable stay and a friendly guide, Plovers B&B at nearby Lydd-on-Sea could be for you. Paul Trodd is a tour guide and writer who, together with his wife Pat, runs Plovers Birdwatching and Moth Breaks from their 200-year-old fishermen's cottage situated within the NNR. Paul has been birding for over 40 years and has taken a keen interest in moths since moving to Romney Marsh in 2006. He operates two garden moth traps and has access to ten or more other traps around the peninsula, offering the potential for a 'grand tour of moth traps', which in the busy high-summer period can take all morning to complete! Pat and Paul can accommodate up to four people on either a B&B or guided basis and moth-ers are welcome to bring their own traps to set up in the garden. Paul is in daily contact with all the local recorders and also has an in-depth knowledge of all the local habitats.

Other sites in southeast England that can, in favourable conditions, produce migrants are:

White-point is regular at Pagham Harbour (East Sussex) and may now be breeding locally (Steve Whitehouse).

Moving lock, stock and barrel south or west into Dorset is perhaps one of the better ideas for any serious moth-er if you can afford it! Visitors can at least take advantage of two of the most famous migrant moth locations open to the public at Durlston Country Park and at several of the more sheltered disused quarry sites on the Isle of Portland. Durlson CP, just south of Swanage, has a very large car park, a visitor centre selling refreshments and an extensive network of footpaths from where you can see the Needles of the Isle of Wight to the east and Portland Bill to the west. With such a grand-scale panorama it is hardly surprising that this site is great for migrant moths and has over the years produced some of the rarest on record. There are extensive areas of Holm Oak, which can give shelter in breezy conditions. Two of the best 'pitches' are the trail to Tilly Whim and the coastal loop between the castle and the Globe. It is very important for visiting moth-ers to let the CP rangers know of your intentions well in advance, as well as providing 'morning after' feedback of your results. The beauty of Durlston is that you can nearly always find some shelter, whatever the direction of the wind.

Portland Bill Bird Observatory has established itself as one of the best single moth recording sites in Britain over the last 30 years, especially since the early 1990s when Martin Cade took over the wardenship. The bird observatory has good-value hostel-type accommodation and visitors to the 'obs' can often enjoy the highlights of the previous night's efforts, although it is not possible to run your own traps there.

A sample of Rush Veneers in a moth trap at PBBO following an influx of over 2,000 in September 2003 (Paul Bryant).

Nearby Cheyne Weares Quarry has for a long time been the favourite site on Portland for visitors targeting migrant moths. It can be good in all warmer seasons, especially if the wind is from the south to southeast. Anywhere on the Jurassic Coast of Dorset can be good, and in recent years the village of West Bexington, between Abbotsbury and Bridport, has proved itself to be almost on a par with Durlston or Portland.

The status of the Isles of Scilly as a great place for migrant birds was established back in the 1960s by a small number of now famous names. In the last 30 years or so, it has also been shown to be very good for migrant moths, especially during the late summer and long autumn periods. St. Agnes has, for a while now, had its own tight-knit group of visitors who come each year to reinforce the efforts of the resident moth enthusiasts and these have all enjoyed excellent results during the last decade. On nearby St. Mary's, where there is much more room, Mick Scott is lucky to have quite a large area in which to place a large number of traps. Any special captures are now usually temporally displayed at a convenient public place either at Longstones Heritage Centre or at the Hughtown dairy! Visitors can also bring their own traps and there are now several places which provide moth-friendly accommodation on the island. 2011 has shown the Scillies to be once more at the top of this game, in particular the number of Vestals, Gems, Crimson Speckled and 'tropical pyralids' recorded.

Vestal were seen in large numbers on Scilly this autumn (Steve Whitehouse).

Other sites in southwest England that can, in favourable conditions, produce migrants are:

Male Four-spotted Footman breeds in Cornwall in late summer but late-September ones like this are more likely to be migrants (Steve Whitehouse).

Trapping area at the east end of Brean Down (Somerset) (Paul Bowyer). 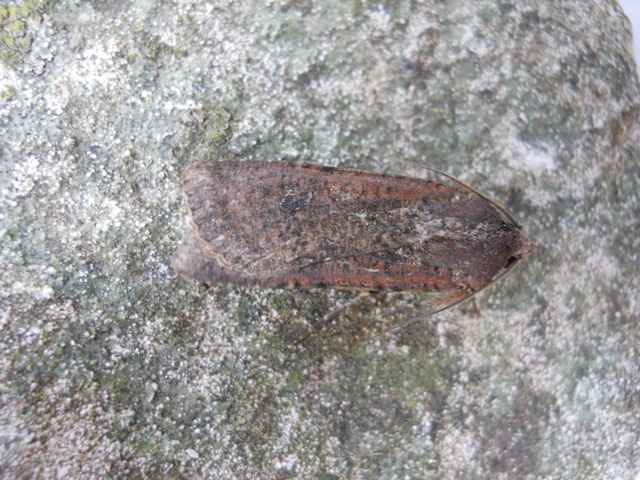 Pearly Underwing have been regularly recorded at Brean Down this autumn (Steve Whitehouse).

South Wales and the Irish Sea

Over the last two decades, a few keen Glamorgan moth-ers have regularly searched sites on and off the south Welsh coast at places like Cold Knapp, the Gower peninsula, Lavernock Point, Summerhouse Point and even the island of Flatholm with mixed results. Almost as many migrants have been observed feeding on ivy flowers under torchlight as have turned up in light traps, showing the value of using alternative techniques. Several places on the Gower have great potential, as shown by the record of the American Plusia Stephen's Gem at Cwm Ivy near Whiteford Burrows on 20th September 2002.

No doubt many of the very under-recorded Pembrokeshire headlands could also produce such dividends. The Lleyn Peninsula and the stretch of coast between Harlech and Tal-y-bont (Gwynedd) have also had good results this autumn. Further north, Sunderland Point and nearby Heysham NR in Lancashire have some migrant form. Across the Irish Sea, County Waterford has one of the best recent Irish track records for migrants, especially Brownstown Head and to a lesser degree Tramore Sandhills, Newtown Cove and Great Newtown Head. Kilpatrick Sand Dunes in County Wexford also scored heavily in late September this year. In Co. Cork, Cape Clear Island is perhaps the best placed for migrants and the bird observatory welcomes visitors who are prepared to bring their own traps.

Spoladea recurvalis at Brownstown Head (Co. Waterford); one of seven in Eire on 1st October 2011, the first ever national records (Paul Walsh).

With the exception of south Suffolk, migrants are generally harder to target on the east coast of England, as ideal conditions for immigration are much less frequent. Landguard Bird Observatory runs a trap on a regular basis and has produced some quality migrants over the years but is obviously affected by 'light pollution' from nearby Felixstowe Docks. Bawdsey Quay picnic area, near the road end at the mouth of the River Deben, is much darker at night and is one place where visitors have had some success over recent years. Red-headed Chestnut and Golden Twin-spot have both been recorded several times. Other Suffolk sites worthy of mention are Aldeburgh, Dunwich, Minsmere, Sizewell and Southwold. Migrants are often recorded at inland sites and a Purple Cloud at Westleton in May 2008 is a great example of the optimistic moth-er's 'anything anywhere' philosophy.

In Norfolk, there are several general-access sites along the coast between Winterton and Hunstanton that deserve attention, and many of these will have interesting resident species to keep up the interest. Further north, both Gibraltar Point NNR (Lincs) and Spurn Bird Observatory (East Yorks) have resident traps that yield the occasional quality migrant. Beyond Yorkshire it is a case of diminishing returns, with the Northumberland coast, perhaps the best of the rest. As with all cases of 'field mothing', make sure you obtain permission of the landowner before putting out your equipment and if the lights are visible from the sea please inform the coastguard! At the time of writing the mild spell continues and as long as the wind maintains a southerly element there is still plenty of time for migrants yet.