In another of our special habitats series, we will look at established coastal shingle. At only a handful of sites from East Anglia through the southern coastal counties of England as far as the West Country, most of our shingle moth specialities and many other species can be seen.

A shingle beach is armoured with pebbles or medium-sized cobbles where, typically, the stone composition grades in size from 2 to 200mm in diameter. At the 'sea side', shingle beaches are typically steep, as waves flow between the coarse, porous pebbles and increase the formation of sediment into the beach. Over a long time and helped by major storms, a succession of stable shingle ridges is generated, each with its own identity of vegetation types adapted to the harsh, dry and salty conditions. Plants good for moths and typically found on various parts of the shingle include Broom, Gorse, Red Valerian, Sea Kale, Sheep's Sorrel, Viper's Bugloss, Wild Carrot and Wood Sage.

Some of the conservation problems associated with shingle habitats are 'man made'. At Dungeness (Kent), plans to build a new reactor at the nuclear power station have, for the moment, been shelved. Elsewhere other factors are development for housing and permanent recreational facilities, and excessive human disturbance. At smaller sites, natural storms and flooding are probably the most serious threats.

The Dungeness peninsula (Kent) is of course the most famous and extensive — and a large proportion is protected, either by National Nature Reserve (NNR) status or by the RSPB. Some other examples of important coastal shingle areas are:

These are home to some of our rarest resident moth species, such as Bright Wave, Ground Lackey, Sussex Emerald and White Spot.

Dungeness boasts a list of over 600 species of macro moth and over 100 species of Pyralidae and is very much a mid-spring to late-summer venue, when a wide range of scarce and rare resident species is present. The whole area has a large trapping network shared between the Bird Observatory, the RSPB reserve and several resident moth-ers. Visitors can seek very reasonably priced hostel-type accommodation at the Bird Observatory. The warden, Dave Walker, usually runs two traps when the weather allows and is happy to show residents the highlights of the previous night's catch. Visiting moth-ers have traditionally put out traps in an area of scrub and shingle next to the road near the Long Pits. Remember that Dungeness is infamous for its windy conditions; so try to choose a period of calm weather for prospective trapping activities.

For visitors who prefer a more comfortable stay and a friendly guide, Plovers B&B at nearby Lydd-on-Sea is a great alternative. Paul Trodd, with his wife Pat, run Plovers Birdwatching and Moth Breaks from their 200-year-old fishermen's cottage in Lade, within the NNR. Paul operates two garden moth traps and has access to ten or more other traps around the peninsula, offering the potential for a 'grand tour of moth traps', which in the busy high-summer period can take all morning to complete! Pat and Paul can accommodate up to four people on either a B&B or guided basis and moth-ers are welcome to bring their own traps to set up in the garden. Paul is in daily contact with all the local recorders and also has an in-depth knowledge of all the local habitats. Karen and Sarah Hand, who stayed there for a week last July, said: "We certainly had a fantastic time at Paul's and managed to see a lot of rare and Red Data moths in a short space of time. We will definitely be heading back at some point in the future for another moth fix."

The RSPB reserve regularly runs two traps and the catches there often include wetland species, useful for bolstering a trip list. Moth-ers will probably have to visit the area, only 20 miles from the M2 at Ashford, several times to catch up on all the specialities. If staying for a while, for a welcome change of scenery visit nearby Hamstreet Woods, which harbours a wide range of mixed woodland moths. You can help plan the timing of your trip by studying the following 'Shingle Moth' calendar, which is based mainly upon flight times at Dungeness.

Habitats on or adjacent to the coast often take time to 'warm up' for insects. It is not really worth looking at shingle till at least early May, when Yellow Belle, Light Feathered Rustic, Tawny Shears and the striking, pied micro Ethmia bipunctella (720) are the first notable species at large. Light Feathered Rustics have a multitude of colour shades and patterns, and some forms of Tawny Shears have almost white as their base colour, especially in the southeast.

In the second half of May Galium Carpet, Cinnabar Moth, Small Elephant Hawkmoth, Cream-spot Tiger, Shears, Light Brocade, Marbled Coronet, White Spot and Toadflax Brocade get on the wing and there is a slight chance of first-brood Scarce Chocolate-tip in Kent.

The summer really kicks off in late June and early July, the most productive time of the year. The red data Sussex Emerald, which may turn up when trapping at Dungeness, must not be potted but released soon safely after it is located, as a special licence is needed to handle the moth. Ground Lackey can be expected either side of the Thames estuary as far north as east Suffolk. Pale Grass Eggar, July Belle, Channel Islands Pug, Brown-tail, Pigmy Footman, Kent Black Arches, Langmaid's Yellow Underwing, Marbled Green, Rosy Minor and Dusky Sallow should all be possible during July. Bright Wave can be found by day on sparsely vegetated shingle in east Kent and the Plumed Fan-foot is possible at light anywhere on the coast between Thanet (Kent) and Winchelsea (East Sussex). Be careful to make photographic records of any coastal White-lined Darts, as some recent research suggests that some populations along the south coast may actually be a different species. There is a better chance of second-brood Scarce Chocolate-tip from late July.

Many July species continue right through August, and some spring species such as Mullein Wave and Tawny Shears will have second broods, making this month almost as busy as July. New species emerging for the first time include Hoary Footman, Hedge Rustic and Feathered Brindle. Feathered Ranunculus, Streak and Mallow emerge in September but continue right through to early November.

Most of the chosen coastal shingle sites are accessible from car parks and coastal footpaths managed by the National Trust, various heritage trusts or local councils, so always make sure you obtain permission from the landowners if thinking of doing a nocturnal moth survey at any site. It is also a good idea to inform the local coastguard of your intention to run bright lights at coastal sites that may be visible offshore.

Extensive 'mature' coastal shingles can be found in southeast Suffolk. Those at Aldeburgh and Shingle Street have easy public access and, among a variety of coastal species, the Ground Lackey is probably the most important, together with the pyralids Pima boisduvaliella (1453) and Nyctegretis lineana (1468). Other species to expect are Cream-spot Tiger, Tawny Shears and Feathered Brindle.

A mixture of shingle and sandy habitats between Pegwell Bay and Deal has several day-flying moths to look out for, including the tiny, red data Bright Wave, which can sometimes be seen in numbers. A former resident in Suffolk and Essex, it does seem to holding its own in this corner of Kent. Other species of note here include Rest Harrow, Oblique-striped and Yellow Belle.

Rye Harbour NR in East Sussex contains natural bare ridges and vegetated shingle and, like Dungeness, is a major home to the Pale Grass Eggar and the micros Cynaeda dentalis, Ethmia bipunctella and Ethmia terminella. A moth trap is run most nights at Lime Kiln Cottage Information Centre, from where themed, monthly public moth mornings are detailed on their Wild Rye website. 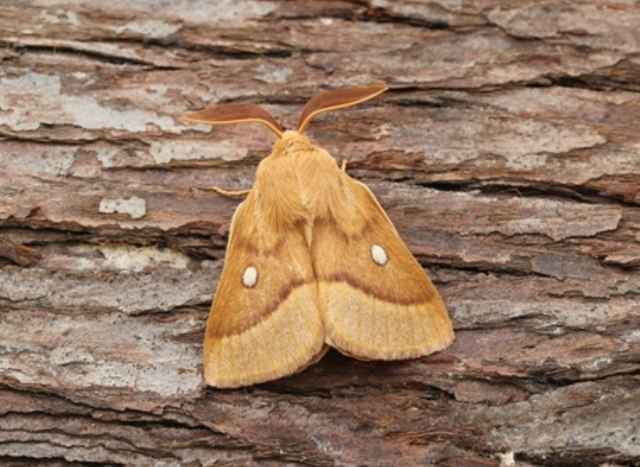 Both Selsey Bill and Pagham Harbour LNR have extensive shingle areas worth exploring. The visitor centre at Sidlesham Ferry is a good place to start as there are marked trails starting from there. On warm nights several shingle species may be expected in the centre trap and some species are sometimes on view to the public.

Hurst Castle Spit in Hampshire can be accessed by day along the spit footpath from Milford-on-Sea or by small boats that leave Keyhaven Quay about every 40 minutes. The vegetated flat area in front of the castle is one of the best British sites for Dew Moth, best looked for from mid-afternoon. Yellow Belle, Cinnabar Moth, Cream-spot Tiger and the local Glanville Fritillary butterfly are relatively easy to find from late May through June.

On the Jurassic Coast in Dorset the formidable Chesil Beach runs 18 miles from Portland to West Bay and can be accessed quite easily from beach car parks at Abbotsbury, Cogden and West Bexington. The Tamarisks at Abbotsbury Beach hold the rare but possibly increasing Channel Islands Pug, which is best looked for in August when it can be found quite easily around the toilet block lights there. Other species to be expected through the seasons include Mallow, Yellow Belle, Cream-spot Tiger, Tawny Shears and Feathered Brindle.

Strete Gate Beach car park at the northern end of Slapton Beach (Devon) has produced a long list of species to light including the rare Tortrix Acroclita subsequana (1160) (which feeds on Sea Spurge), White-lined Dart, Marbled Coronet, Tawny Shears and the plume Stenoptilia zophodactylus. Barrett's Marbled Coronet has been recorded at the north end of Slapton Beach during mid-summer. Recent records have failed to determine whether they are breeding on the beach or on nearby cliffs.

There are many other areas in Britain with coastal shingle that may reward effort, particularly Blakeney Point in north Norfolk, Herne Bay in north Kent and Point of Ayre, Clwyd. These places may be under-recorded, so there are always chances of discovering something new, either at county or national level. It is very important to let individual county moth recorders have a complete record of what you find. As they are on south-facing coasts, all the featured sites could also expect to see migrant moths in favourable conditions. This may add an extra taste of spice when looking for our scarce shingle moths.

* The numbers given after a number of micro moth species in the text are the British Checklist Species numbers as assigned by J. D. Bradley in the Log Book of British Lepidoptera (2000).