This is the first of a series of articles on moths in special habitats, where we look at both the common and scarcer species associated with prime habitat types, and the times of the year they are most likely to be encountered.

April 2011 has seen unprecedented, almost Mediterranean-like, weather, with well-above-average temperatures and days of endless sunshine. This has had an amazing effect on the leafing-up process in many tree species, and even the oak, which can be one of the last to form a good canopy, is probably two weeks ahead of the norm. Oaks are perhaps the most important tree within the broad-leaved woodland habitat and support an incredible number of invertebrates, of which macro and micro moths make up a good proportion. English moth-ers have already noticed that many moth species are about two weeks ahead of their normal emergence time; this is nature's way of synchronising respective life cycles with the chosen food-plant.

With so many moth species already recorded in many gardens, you might wonder why you need to go further afield. Witness a moth recording event or visit an oak woodland any night between April and September, and the variety of moths on view will tell you why. Both Pendunculate and Sessile Oaks can be found in most woodlands and, importantly, as single trees in hedgerows, pasture or peripheral habitats such as marsh or heath. These are all very important. Ancient oak trees that dominate mixed woodland containing other tree species such as beech, birch and elm are the ones to target if wanting to see the best variety of moths. 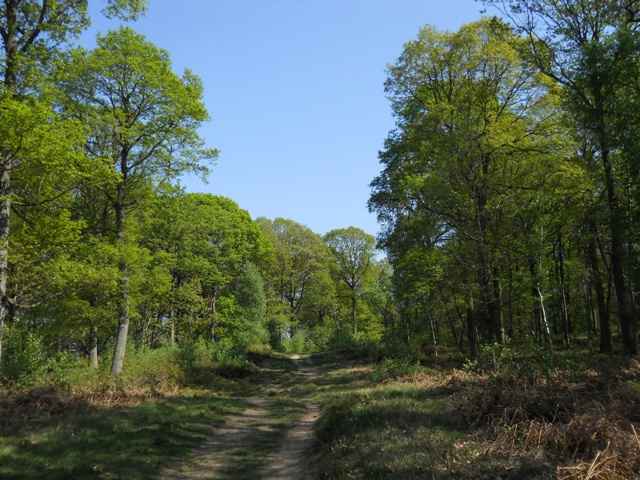 Good-quality oak woodland can be found across much of the country, but it is the well-managed and protected examples in the southern half of England that offer the greatest 'treasure chest' of moth species. Classic ancient oak woodland reserves can be found in abundance in Kent, Sussex, Surrey and Berkshire. Others that automatically come to mind are in the Forest of Dean, Gloucestershire, the New Forest and Pamber Forests in Hampshire, Horner Wood NNR in Somerset, Salcey Forest in Northants, Savernake Forest in Wiltshire and the Wyre Forest, straddling both Shropshire and Worcestershire. 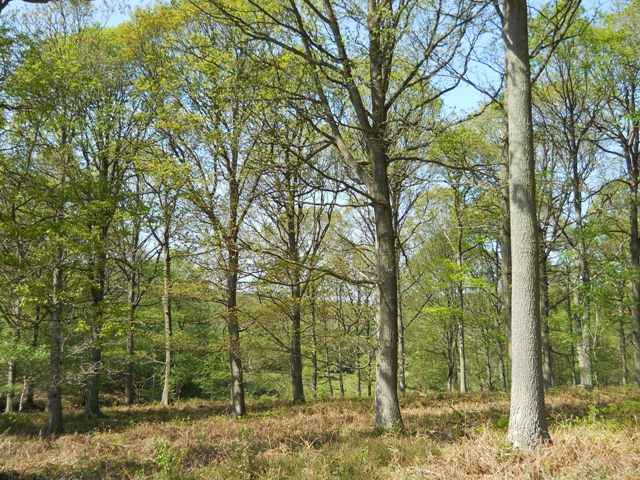 Woodlands owned by the County Wildlife Trusts, the Forestry Commission or the National Trust are where the habitat is most likely to have undergone good management practice such as coppicing, ride cutting and re-planting. Old deadwood and a healthy understorey also need to be retained to maintain the full ecological spectrum. Over the last decade or so Butterfly Conservation has undertaken a series of projects promoting the conservation of butterflies and moths within ancient broad-leaved woodland, and has recently published a booklet Woodland management for butterflies and moths: a best practice guide (Clarke et al. 2011). BC are also working closely with the Forestry Commission on 'Lepidoptera on Forestry Commission land in England, a ten-year Conservation Strategy 2007–2017'.

A good survey strategy for field moth trapping is to visit your chosen woodland once a month between April and September. Make sure you have obtained permission from the owner well before you go. Visits should be made on calm and cloudy nights for the best results. In April some of the early spring species such as Blossom Underwing and White-marked can still be on the wing in the first week or so, and from then on we can expect Oak-tree Pug, Barred Umber, Square-spot, Great Prominent and some of the other prominents. Depending on the season, many other common species may also be on the wing. 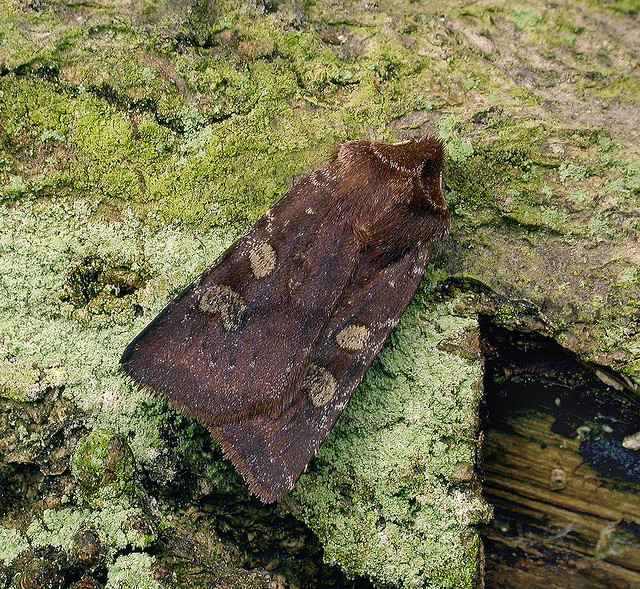 In parts of the New Forest the very local Marbled Pug can be looked for amongst very mature oaks, such as those near Ladycross. Note that a special permit has to be obtained from Forestry Commission to operate light traps in the New Forest.

As we enter May and leave the glut of early spring moths behind, we encounter a lot more species, but in smaller numbers, which at least makes counting the contents of the moth trap a little easier. It is a case of quality rather than quantity, with Oak Hook-tip, Maiden's Blush, Scorched Wing, White-pinion Spotted, Pale Oak Beauty, Coxcombe Prominent, Orange Footman, Least Black Arches, Pale-shouldered Brocade, Marbled White-spot and Nut-tree Tussock among some of the more attractive species. 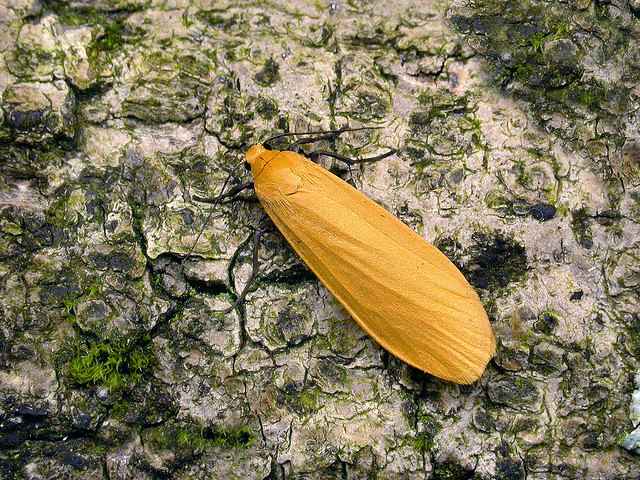 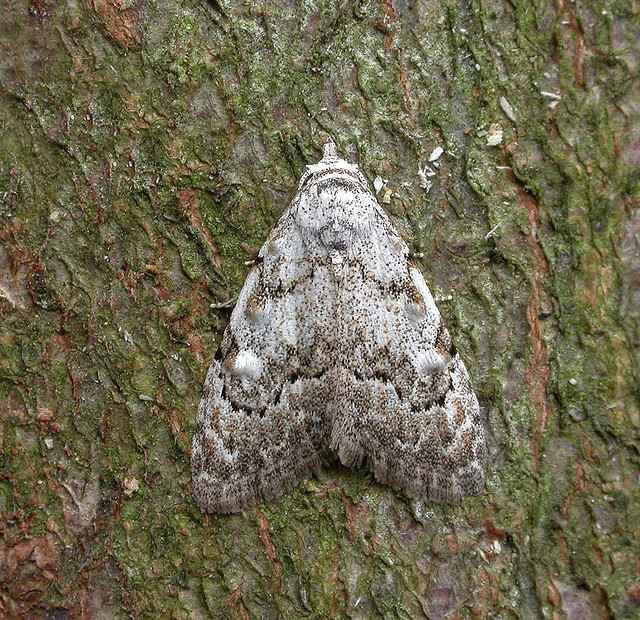 As June warms up, the number of potential species increases quite dramatically and can, on certain nights, be almost overwhelming. Running several moth traps all night can easily produce well over 200 species, if you can identify all the micros! A speciality, the Common Fanfoot, is currently doing well in the Wyre Forest and southeast of England. The female of this species prefers to lay its eggs on 'snapped-off' smaller, outer branches of Pedunculate Oak. The Scarce Merveille du Jour is a Red Data species found in certain mature oak woods between Kent and Cornwall and nowhere more than 25 miles from the coast. Other sought-after species at this time include Satin Lutestring, Beautiful Carpet, Lead-coloured Pug, Orange Moth, Great Oak Beauty and Green Arches, while Blotched Emerald, Brindled White-spot, Red-necked Footman, Purple Clay, Clouded Brindle and Beautiful Golden Y are all well received. Be careful not to get caught out by the many forms of Ingrailed Clay, the 'Heinz Moth' with at least 57 varieties! 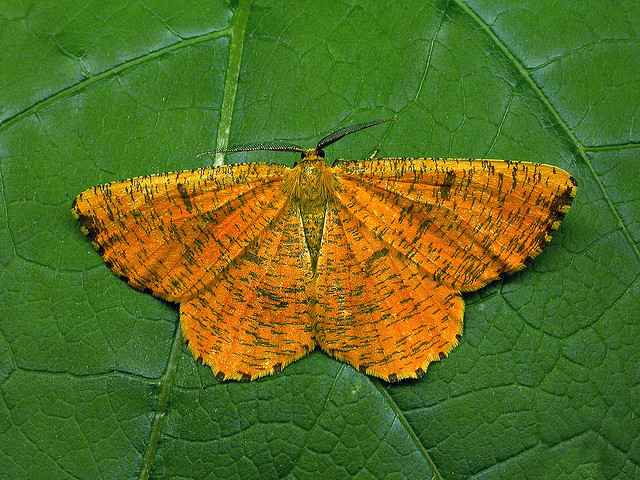 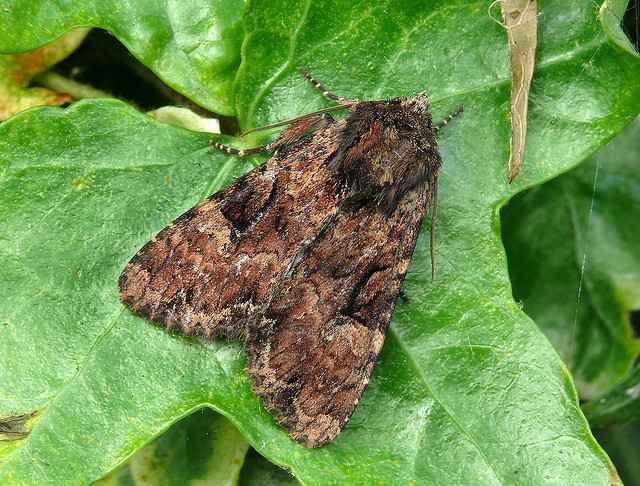 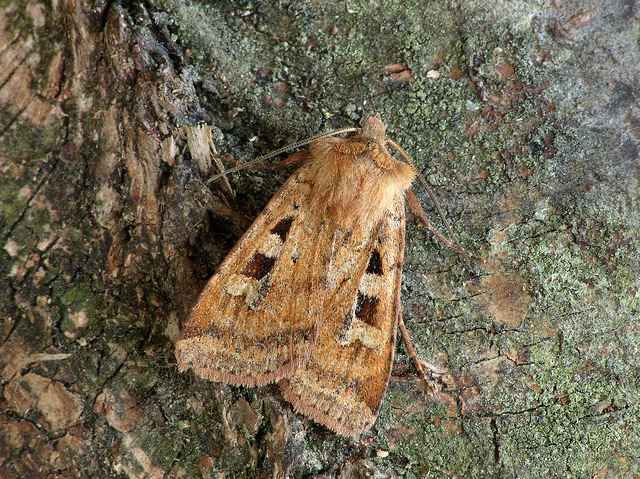 The first half of July is probably the busiest time of the year in any habitat, and oak woodland is no exception. Specialities include Small Black Arches in its north Hampshire and Surrey strongholds, Heart Moth in very old well-spaced Pedunculate Oak parkland in the Home Counties, and Clay Fan-foot on either side of the Kent/Sussex border. Particularly striking this month are the Leopard Moth, Festoon, Lilac Beauty, Rosy Footman, Scarce Silver-lines and Beautiful Snout. Even the 'brown moths' are pretty good, especially the tiny Triangle, which looks more like a bug than a moth! Phoenix, Brown Rustic and Small Fanfoot can make up some of the supporting cast. 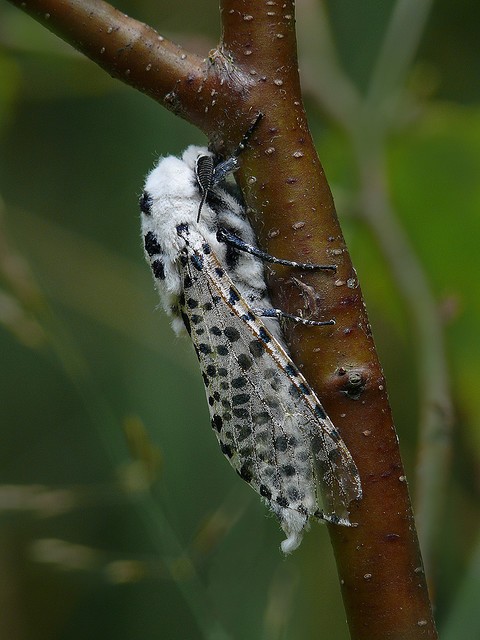 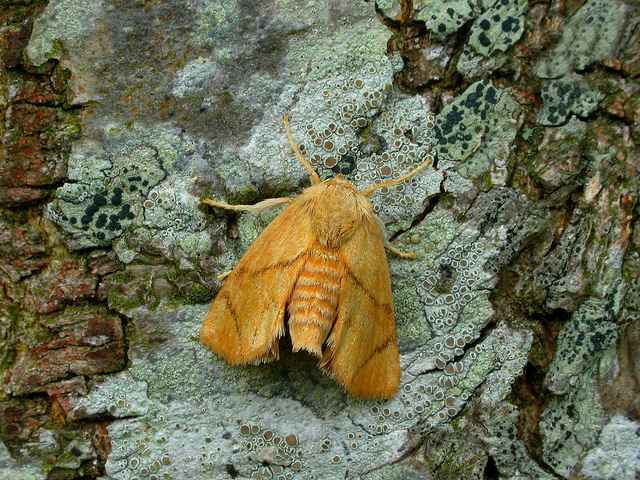 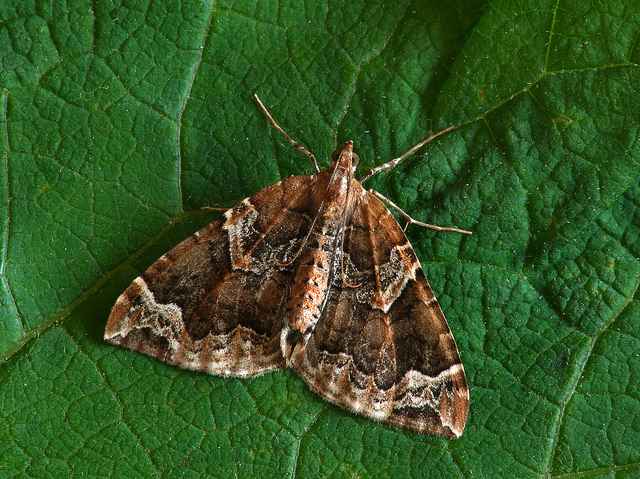 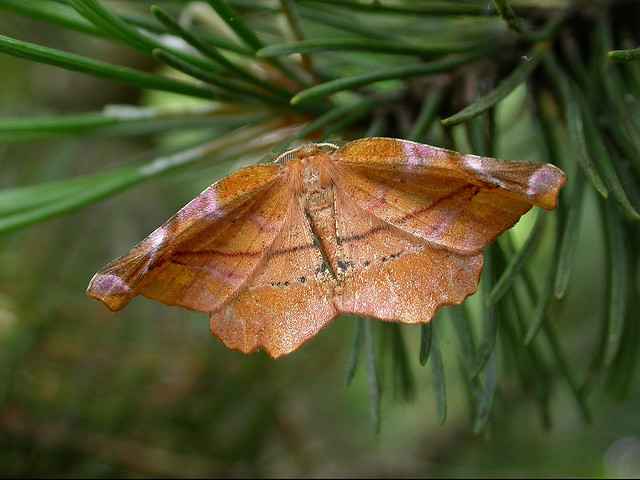 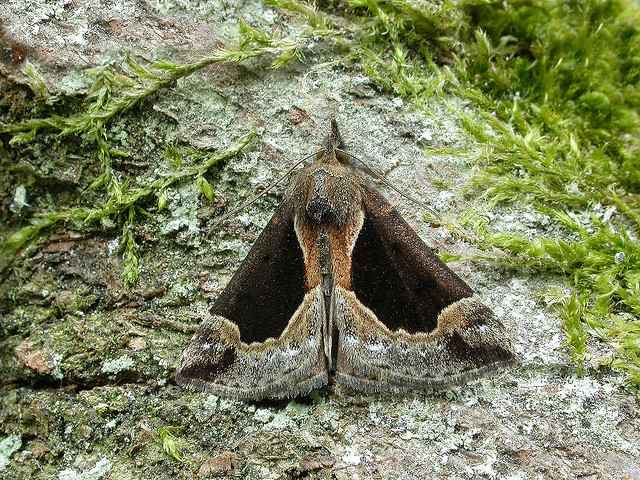 The first week of August is the time for Crimson Underwings; both Light Crimson Underwing and Dark Crimson Underwing are Red Data species. Their stronghold is in the heart of the New Forest, where they have been traditionally been looked for, since Victorian times, soon after dusk when feeding on the sap runs of huge ancient oaks in the Ladycross area.

Broad-leaved woodland tends to 'dampen down' a bit in late summer, but Svensson's Copper Underwing, Barred Chestnut and many other common moths keep the interest going. September has Oak Lutestring, Brindled Green, Flounced Chestnut and several sallows, which take on the colours of autumn leaves. 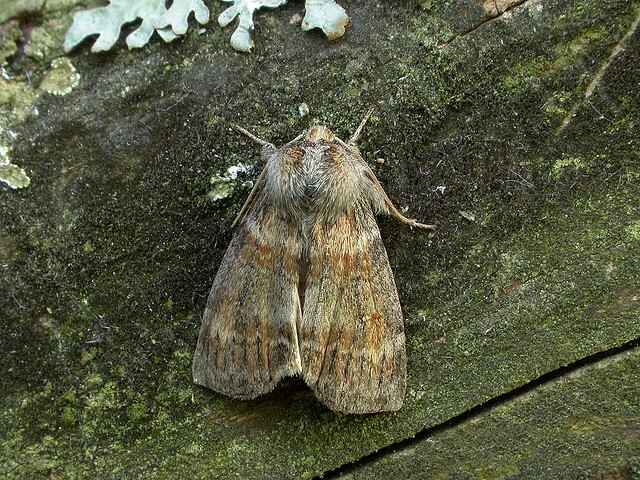 Later in October a great favourite is the Merveille du Jour together with Pale Pinion and Grey Shoulder-knot, both emerging prior to winter hibernation. The classic early winter species, the Sprawler, can be the highlight of any November effort but don't expect then to arrive much before 22:00!

Although possibly now extinct, the Orange Upperwing is worth a mention. Last seen in its west Wales breeding habitat between Aberystwyth and Cardigan in late autumn 1994, the species may still survive in some of the more remote hanging oakwoods in that area and maybe, with some considerable effort and luck, may make it into someone's notebook in the future!

Oaks are also host to scores of micro moths, far too many to mention here. However, two species that are indeed worth a look at are Esperia oliviella (650) and Oecophora bractella (651). The larvae of both species feed on dead and decaying deciduous wood before emerging as adults in the mid-summer period. The amazing beauty of the adults of both species show why micros are not to be ignored. 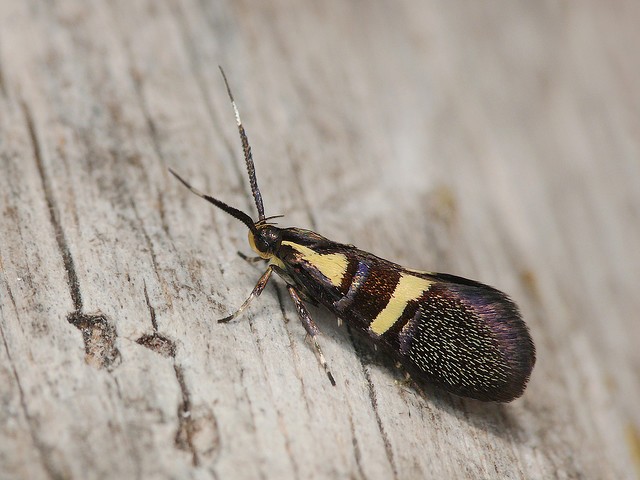 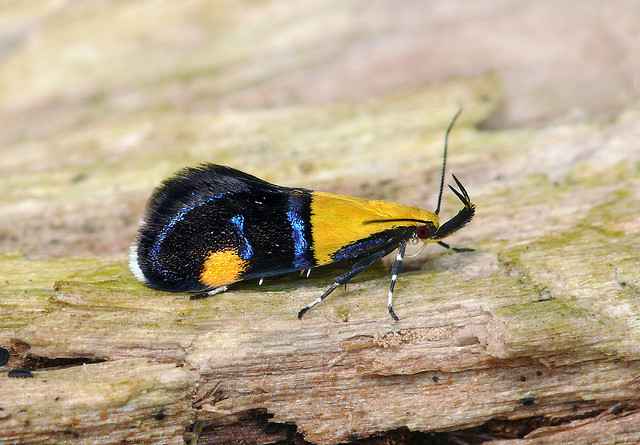 With dry conditions underfoot and canopies almost in full leaf, now is the time to get out and look at oak woodland near you.

Membership of Butterfly Conservation is half-price until the end of May.