Moth News: Searching for the Conformist and other Scottish Highland Moths, Easter 2012

While searching for Scottish Highland speciality moths with the aid of light-traps, wine-ropes and sugar in early April of last year, Suffolk-based moth-ers Paul Bryant and Matthew Deans made what may have been a very significant discovery. The first night, April 8th, was spent at Strathdon (Aberdeenshire), where both Sword-grass and Red Sword-grass were attracted to sugared fenceposts and wine-ropes in small numbers (see Moth-trapping Part II for methods and techniques).

Spurred on by their success, they headed for the west side of the Cairngorms National Park to look for other specialities. During an afternoon visit to Ralia Moor, to the southwest of Newtonmore (Highland), a male and two female Rannoch Brindled Beauty were found at rest on wooden fenceposts in the warm and sunny conditions. The wingless female is perhaps both one of the most bizarre-yet-beautiful of all Scottish moths. Both sexes rest up during the day and do not stray far from their foodplant, the Bog Myrtle.

Arriving at Insh Marshes RSPB during the early evening of 9th, the two obtained permission to run several traps on the reserve, and subsequently set up in a mixed area of open birch and juniper woodland at Lynachlaggan, not far from the reserve office at Ivy Cottage. The main target here was Rannoch Sprawler. By dusk, cloud had rolled in and the breeze had dropped, almost guaranteeing a good night ahead. The first of what would be a dozen Rannoch Sprawlers had arrived in a trap by 22:00. On nearby sugared posts and wine-ropes placed along the approach road, several Red Sword-grass and a single Sword-grass were found, the latter being the first ever recorded in the wood. A second trap round before midnight produced an unfamiliar Lithophane species in an MV trap which was safely potted up: even in the torchlight it looked very interesting! Back at Ivy Cottage the moth's identity was confirmed as a Conformist of the form furcifera. This subspecies has a wide European and western Siberian distribution but is a rare migrant to England, most recently recorded at Seaton Sluice, Northumberland on 16th April 2007. The Insh Marshes individual is, however, the first for Scotland.

Despite the adrenaline rush, the duo did manage a few hours' sleep, before a full inspection of all the traps at dawn revealed another much sought-after moth: a male Kentish Glory. Also recorded were numerous Brindled Beauty and Engrailed, as well as some of the gothicina form of Hebrew Character. All the available evidence suggests that this Conformist was probably a primary migrant, as four Diamond-back Moths were also found among the large catch, with a few Dark Sword-grass also found elsewhere in Scotland at the time. Despite the area's being systematically trapped by both RSPB staff and visiting moth-ers for a number of years, there is a small possibility that the species exists as a rare resident within the Scottish Highlands, as the foodplants of alder, birch and willow are all abundant. With that in mind, a proposed search for the moth is planned around the Easter weekend of this year: anyone interested should contact the author, who will refer you to the search organisers for more details. Relatively mild weather during late February and March this year has been responsible for both Rannoch Sprawler and Rannoch Brindled Beauty being recorded already in the Spey valley, with Sword-grass noted in Banffshire, on the Black Isle and in Sutherland. Of course, weather is always unpredictable in this part of Scotland, and the dates of the expedition may require last-minute fine tuning in the event of severe gales, ice or snow! There are a small number of hostels in nearby Kingussie and Newtonmore, with plenty of B&Bs in the area for those who prefer something more comfortable. Any visit to Insh Marshes RSPB should always be preceded by contacting staff at the office; contact details can be found on the RSPB website.

In other news, Andrew Masterman is again organising a session to look for the red form of Rannoch Sprawler on the north side of Loch Rannoch (Perth & Kinross) over the weekend of 23rd–25th March 2012, with searches in suitable habitat on the south side of the loch also set to take place. For details of last year's efforts, see Light Trapping for Rannoch Sprawler at Loch Rannoch in 2011. If anybody is interested in attending this weekend, please email Andrew. A recce in the area during the evening of last Sunday (18th March) found 37 moths already active at three sites! 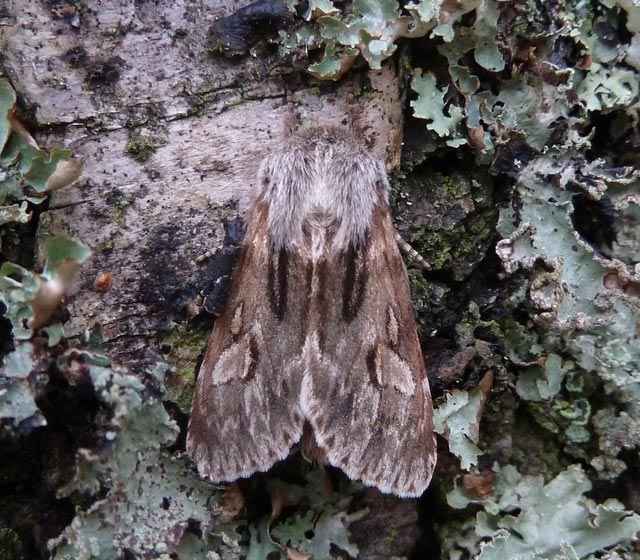 Let us hope the weather is kind over the fortnight, and good luck to those who make the long journey north. Whether the Conformist is seen again or not, it promises to be a worthwhile trip for anyone who makes the effort.