With cool, unsettled conditions affecting Britain since early April, the imposing high-pressure system and associated sunny, dry and warm days of late March now seem a distant memory. As the month progressed, several low-pressure systems tracked across the North Atlantic and hit Britain, making the second half of April a truly cold, sodden and miserable period for our moths. With night-time temperatures well below the seasonal average, attempted garden catches (where possible!) have been dire for the last three weeks. In a similar vein, many field meetings have either been cancelled or curtailed with minimal results.

The tiniest of flurries of migrants was apparent in late March with a Red-headed Chestnut at Wadhurst (E Sussex) on 29th following another in Devon earlier in the month. Nationally, an arrival of around 34 Dark Sword-grass culminated in 12 on South Uist (Outer Hebrides) between 27th and 31st March and, interestingly, was the only concentration noted: others were widely scattered either side of the Irish Sea, with a few on the south coast of England. A Pearly Underwing made it to Ballycotton (Cork) on 27th March and another was on St. Mary's (Scilly) on 27th April. A White-speck was also on St. Mary's on 25th April, while a sprinkling of just 26 Silver Y included an interesting variant at Rodwell (Dorset) on 6th April. 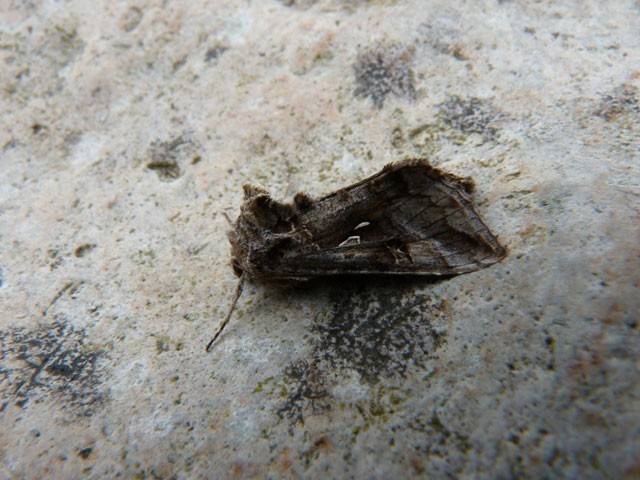 Elsewhere there were 19 Hummingbird Hawkmoths, 9 Diamond-back Moths, 8 Rusty Dot Pearl and 2 Rush Veneers. In Dorset, early April Blossom Underwings at West Bexington and Broadwey on 2nd and 8th May respectively may well have been primary migrants. 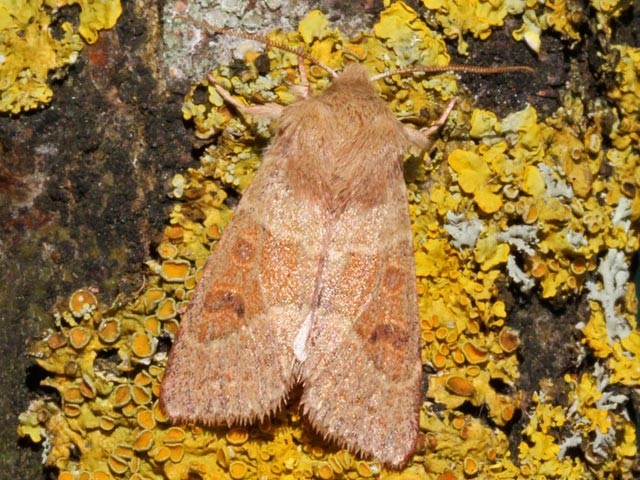 The Lepidoptera migrant scene was actually spiced up by rare butterflies. Large Tortoiseshells included at least one, probably two, lingering at Walter's Copse (IoW) between 27th March and 2nd April. Another was spotted and photographed by a passing cyclist on a tree trunk at Warblington (Hampshire) on 30th March, with another at Porth Hellick, St. Mary's (Scilly) on 1st April. Clouded Yellows included two in Dorset, one in Glamorgan and one in Warwickshire between 23rd March and 12th April. Single Painted Ladies were in Fulham (Greater London) on 28th March and on Combs Moss (Derbyshire) on 2nd April.

The calm and sunny days of late March again provided ideal conditions for observing two rather mercurial day-flyers: Light Orange Underwing and Orange Underwing. Good numbers of both were widely reported and some even photographed at low level, often by puddles or on damp, bare ground. An early male Emperor Moth was attracted to an assembled, captive-bred female at Shefford (Bedfordshire) on 23rd March. 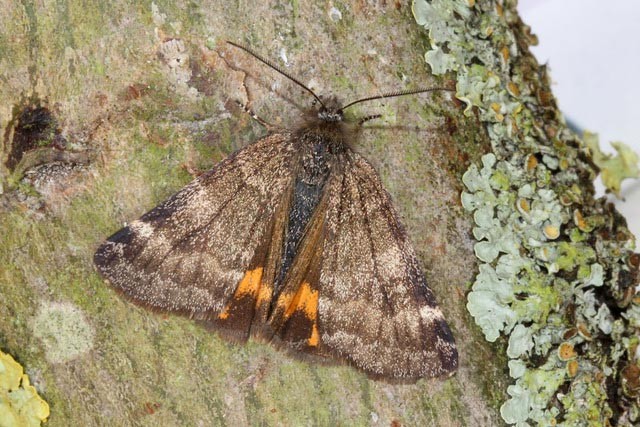 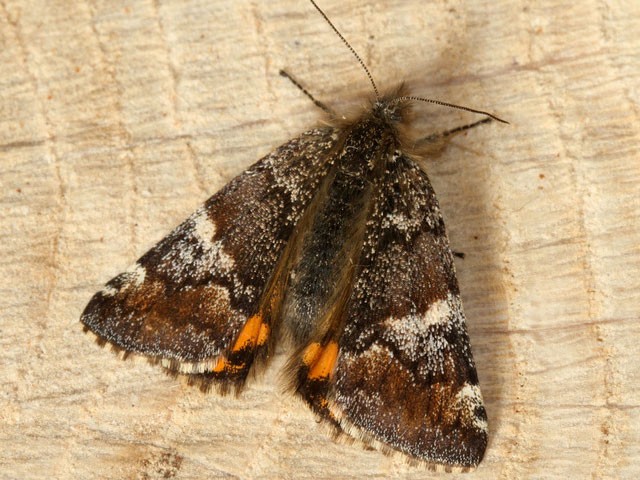 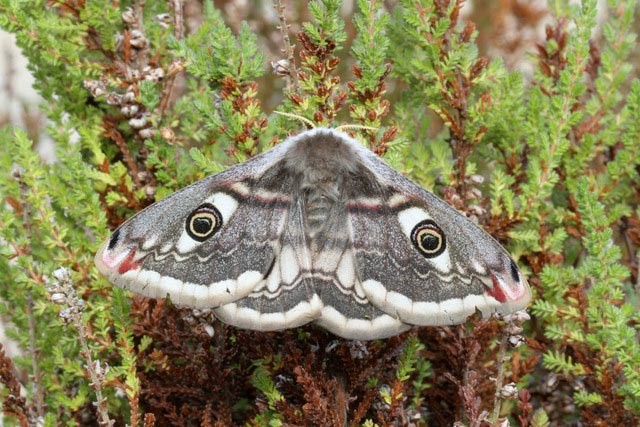 A few interesting records of residents included a Tawny Pinion near Orlandon (Pembrokeshire) on 24th March, which was a county first. A Barred Tooth-striped at Taynuilt (Argyll) on 13th April was a welcome record for the 10km square and was followed by two more on Mull. The species may be more widespread along the west coast of Scotland than records suggest, as the food plant — wild privet — is quite widespread on inaccessible cliffs. 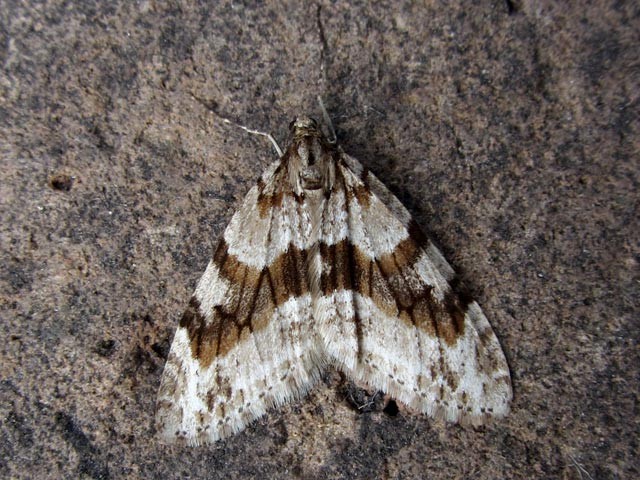 The annual daytime survey for Belted Beauty around Morecambe Bay (Lancs) on 22nd April was reasonably successful considering that the habitat had been inundated by extremely high spring tides about a fortnight previously. The final count was of 101 females and 61 males.

Hebrew Characters continued their long flight period in reasonable numbers and included one of the form gothicina at Slaley (Northumberland) on 7th April. This form is rarely seen south of the Scottish Highlands. 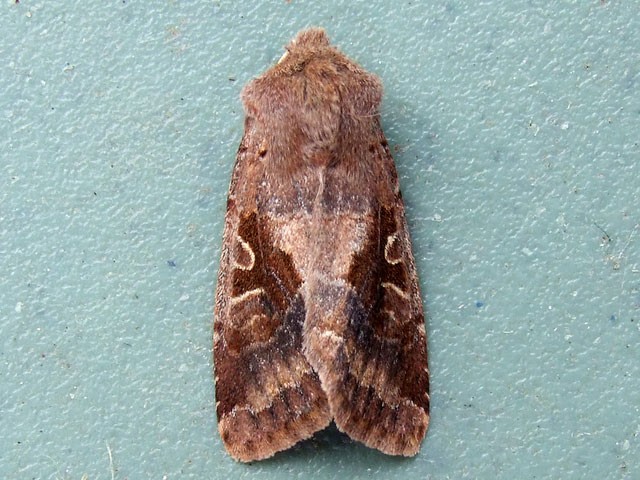 As a continuation from the early spring article, tables containing a wide selection of emergence and re-emergence dates for macro moths over the period can be found below. Note that this is not intended to be a definitive list for the whole of the British Isles; it is merely a collation by the author from personal communication and online newsgroups and websites.


The Brimstone Moth in Devon, the Small Dusty Wave in Surrey and Flame Carpet in Argyll are all, on a national basis, exceptionally early records. The Waved Umber and Pebble Prominent were the earliest ever in Hampshire and the Isle of Wight respectively. The Common Heath in Sligo, Ruby Tiger in Wicklow and Puss Moth in East Sussex all catch the eye as well before the normal flight period but were typical of this year's batch of early spring records. The Chamomile Shark at Howick (Northumberland) on 7th April was the fourth for VC68 and the earliest ever recorded in that vice-county. 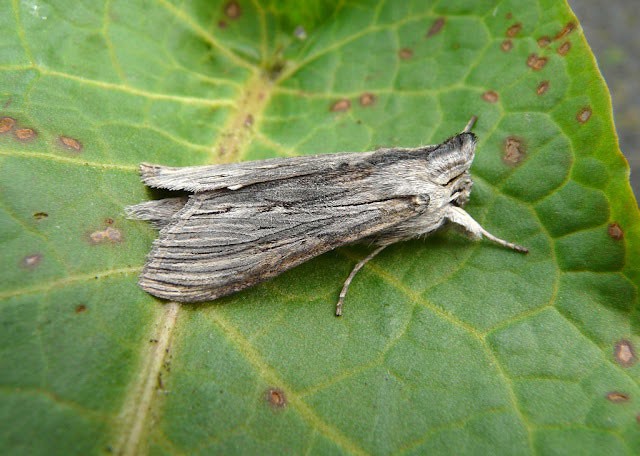 Before the 'colder' period set in, moth-ers out in various deciduous woodlands sites were able to record reasonably good numbers of Frosted Green, Purple Thorn and Lunar Marbled Brown. 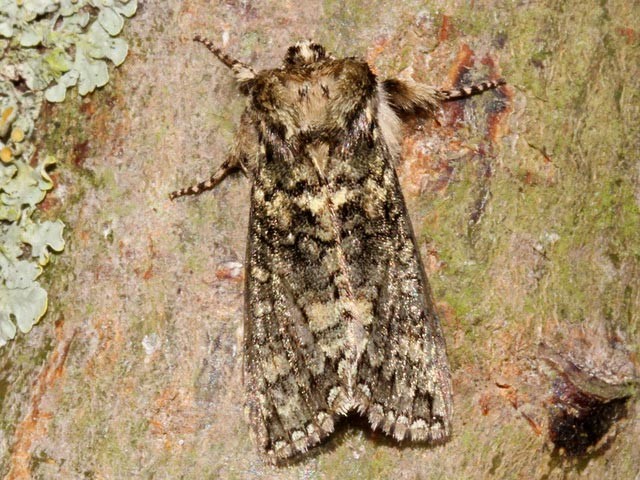 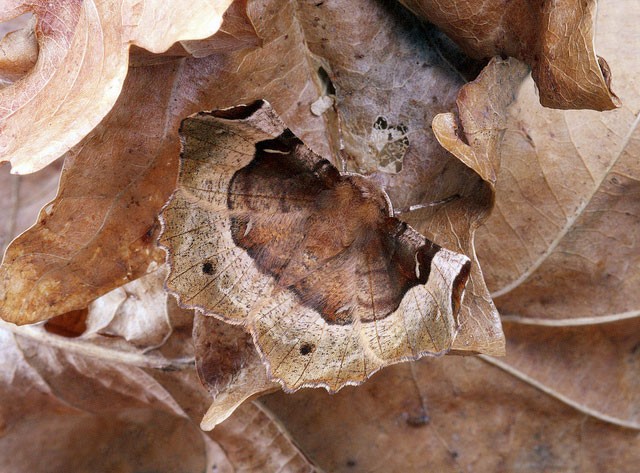 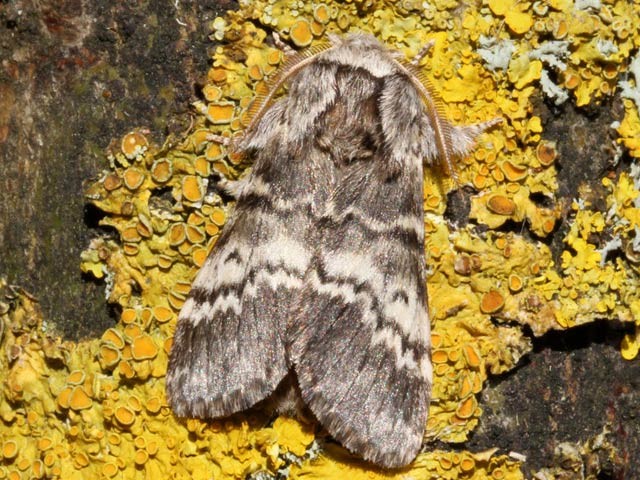 Recorders in some gardens were rewarded with small numbers of Powdered Quaker and Early Grey. 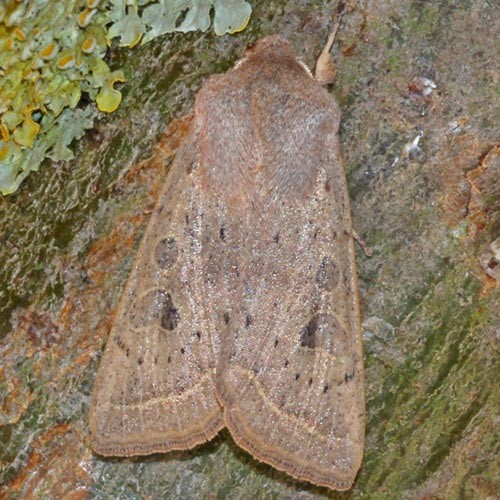 Further to tables 1 and 2, table 3 illustrates the emergence and re-emergence dates of some micro moths. Again, this is not intended to be a definitive list for the whole of the British Isles; it is merely a collation by the author from personal communication and online newsgroups and websites.

Table 3: Some micros emerging and re-emerging

The two Acleris rufana (1057) at Taynuilt (Argyll) and on nearby Mull are perhaps not too unexpected, as they prefer moorland and damp woodland habitats. Another at Holystone (Northumberland) on 27th March was, more surprisingly, the first record for VC67. 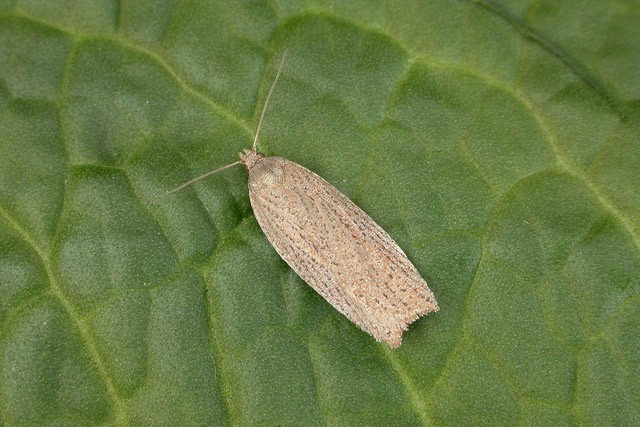 An Acleris logiana (1051) at Warnham LNR (W Sussex) on 30th March was great reward for a conservation worker doing daytime physical management work at the site. Micros re-emerging from winter hibernation are always an added early spring challenge for many rusty moth-ers. Caloptilias are no exception, and Danny Arnold seems to have got his eye in for Caloptilia falconipennella (289) at Upper Rochford (Worcs), with five records of this likely under-recorded moth at his constant effort site there in just three years. A scarce 'spotted form' of Caloptilia elongella (282) was a more tricky identification, and illustrates the need for great caution when trying to use library photographs alone for identification. A Digitivalva pulicariae (472) near Orlandon (Pembrokeshire) on 31st March was a first for the locality. 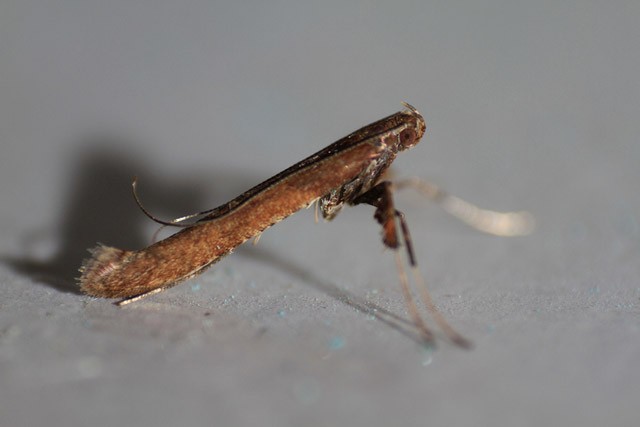 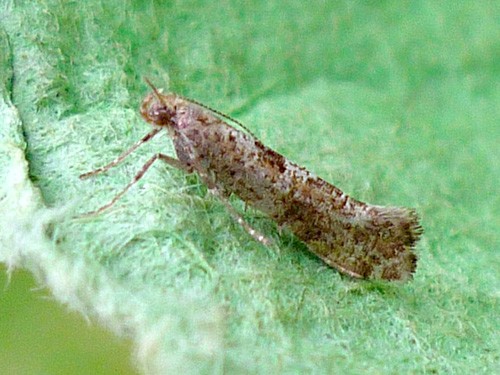 The first monthly Wyre Forest Moth Group outing of the year came up trumps on 1st April with two male Lesser Lichen Case-bearer (177) — a species rarely seen at the adult stage. According to records on the National Moth Database, North Worcestershire appears to be the best place to find this tiny yet beautiful micro. Remarkably, the wingless female has hardly ever been seen in the wild. 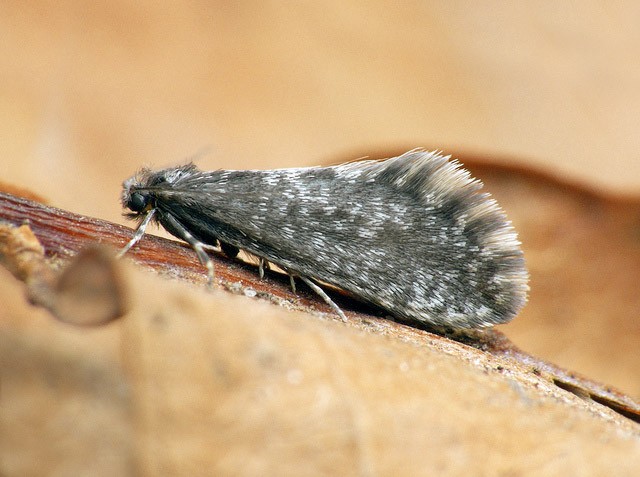 Later in the month, a moth course held at Cilgerran (Pembrokeshire) on 23rd April produced another county first in the form of Pammene argyrana (1228). A Pyrausta nigrata (1366) was recorded on the south side of Bredon Hill (Worcs) in mid-April, and was the first in the area for over a century. On one late March day at Mill Hill NR (W Sussex), no fewer than three different species of day flying Pyrausta were on the wing.

As a miserable April and early May draws to a close let us hope that, for butterflies' and moths' sake, the weather improves. Arguably the best bit of news in late April was confirmation from the authors that the long-awaited book Field Guide to Micro-moths of Great Britain and Ireland should be on sale by the end of May. I have personally been waiting for something like this for years, and I hope it will inspire many other British and Irish moth-ers to advance to another identification level. In this way, we will surely be able to add immense knowledge to the recording of our smaller moths...