The first two weeks of February experienced the only prolonged cold snap of the winter, with night-time temperatures falling to –10°C across central England and even colder further southeast. The last third of the month became very much milder, with overcast and calm conditions ideal for garden and woodland moth trapping. High pressure during most of March meant that sunny, warm days prevailed, although the nights were clear and with occasional frosts. Highlights included the rediscovery of the micro moth Durham Tinea (last recorded in England 134 years ago), two more Black-spotted Chestnuts in Kent and the now seemingly annual batch of early-emerging residents.

With light and intermittent southwesterly winds from mid-February, a few welcome migrants managed to appear in trap boxes. A Red-headed Chestnut at Harewood Forest (Hants) on 17th February was a surprise so far inland but was quickly followed by others in East Sussex and Hampshire, and a fourth at Ruckinge (Kent) on 22nd March. In another chapter of its British history, two more Black-spotted Chestnuts were trapped, both at the same location of New Barn, Longfield (Kent) on 23rd and 29th February. Peter Heathcote had previously noticed an odd moth coming to light there on a mild, damp night on 3rd November 2011. However, it was not secured and what may have been a British first vanished into the night. As some consolation, images of both of this year's individuals now fully confirm the occurrence at this site. Two at a single site, well inland of the Thames Estuary and only eight miles southeast of Dartford, suggests that, in conjunction with the November records, the species might have colonized the area in small numbers.

A White-speck trapped by Steve Petty at Tighnabruaich (Argyll) on 13th March is an interesting spring record so far northwest. This North American species has colonised southwestern Europe and North Africa, and may even be a scarce temporary resident in western Britain. It would be nice to think that this individual was a transatlantic wanderer to this sheltered coastal locality overlooking the Isle of Bute, but it seems more likely that it is just an early European migrant. Either way, it represents the first record for VC98. Another was recorded at the more expected location of Bonchurch (IoW) on 20th March, representing only the second island record during the first half of the year.

Three Pearly Underwing were recorded at Portland Bird Observatory (Dorset) between 17th and 23rd March. The first Dark Sword-grass of the year was at Cockermouth (Cumbria) on 2nd March, followed by seven others during the month. At least 16 Silver Y were recorded by late March, while most of the 16 or so Hummingbird Hawkmoths had probably hibernated within the UK. There were just two Rusty Dot Pearl noted. Adventives included another presumed Satin Stowaway (Antichloris viridis) discovered by Jane Bolton on 23rd February in her kitchen at home in Saul (Glos), in a bag of recently purchased Costa Rican bananas obtained from the nearby Tesco at Quedgeley! A Duponchelia fovealis (1043a) was discovered in a Lancashire bathroom on 29th January: this species is believed to arrive on imported houseplants!

A Large Tortoiseshell butterfly was in Kent at Lydd-on-Sea on 15th March followed by a Clouded Yellow at Paignton (Devon) on 19th March and a Camberwell Beauty was at Marley Common (West Sussex) on the 22nd March. A rather odd record of what is normally a true autumn species, a Sallow, turned up in an Oxfordshire Rothamsted Trap around 9th February. Two Mottled Grey at South Glendale, South Uist (Outer Hebrides) on 1st March constituted the first record for the islands. Five Streamer at Marston Moretaine (Bedfordshire) on 28th February were the earliest ever in that county. A Dotted Chestnut at Charnwood Lodge (Leics) on 24th March appears to be the furthest north of a reported 25 caught nationally since late January.

To date, it seems that Common Quaker has not repeated the phenomenal showing noted in the first half of 2011. However, both Small Quaker and Twin-spotted Quaker have had an exceptional spring, especially in woodlands. Two MV traps set in woodland at North Harewood (Hants) on 10th March produced nearly 2,000 Small Quaker, compared to a modest 260 Common Quaker. In addition, a count of 69 Twin-spotted Quaker was also made in a single garden trap near Pershore (Worcs) on 20th March; this was the highest total there in a decade. English Small Eggars were actually quite late this year, not appearing in their stronghold counties of Dorset and Somerset until the start of the fourth week of March. 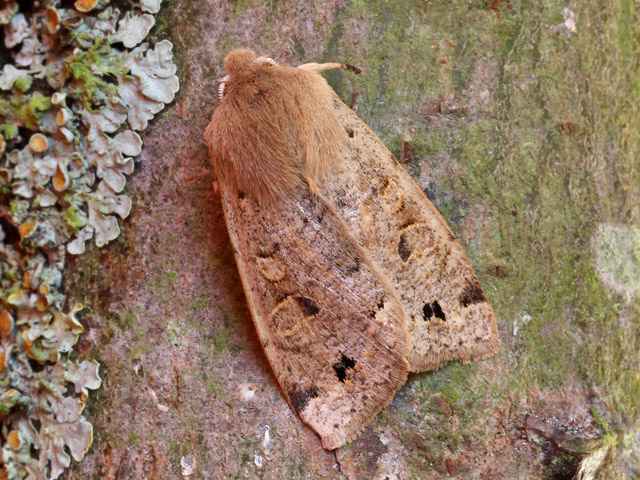 Nowadays, each spring seems to set new records for first emergence dates across the country. Set out below are first dates for species recorded for the first time this year since late January. Note that this is not intended to be a definitive list for the whole of the British Isles; it is merely a collation by the author from personal communication and online newsgroups and websites.

Of particular note are the records of Water Carpet, V-Pug, Common Pug, Lunar Marbled Brown, Scorched Carpet, Vine's Rustic and Muslin Moth. The Red Chestnut in Northumberland was the earliest ever in that county. 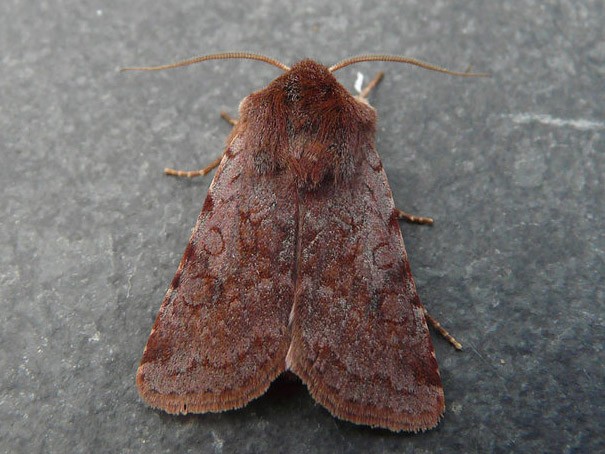 The Buttoned Snout was found fluttering at a conservatory window and is an exceptional record for what is a very scarce south Midlands moth.

The Acrolepia autumnitella at Middleton was the first ever for Montgomeryshire, while the Pammene giganteana at East Blean (Kent) was very early and the Elgin Shoot Moth (1213) at Glen Elgin was a very welcome record for one of Britain's few true endemics, occurring in an area with hardly any field surveying at this time of the year.

The rediscovery of the Durham Tinea Acrolepiopsis betulella (474) in Co. Durham was certainly the most significant event of the period for micro moths. A last-minute trapping session was organised by Keith Dover and Tom Tams at a regular trapping site in the county on the night of 12th March. Good numbers of moths were attracted to a 125MV light over a white sheet. By mid-evening it was already feeling decidedly cool and, at 20:40, a small moth seen flying around the light was routinely potted up. The following morning, it was visually narrowed down to an Acrolepiopsis species. The most likely candidate appeared to be A. betulella, which was presumed long extinct in England. John Langmaid later confirmed the identification after viewing an image of the live moth. Tom then discovered that it had not been officially recorded in England since 1878! The host food plant, wild garlic (Allium ursinum), is fairly widespread in northeast England, and it is not yet known why the moth has such a limited British range.

An Acleris umbrana (1052) was at Shaggs, Lulworth (Dorset) on 15th February with another at Berrow (Somerset) on 21st March. An Acleris kochiella (1050) at Hillmorton, Rugby (Warks) on 29th February was only the second county record. 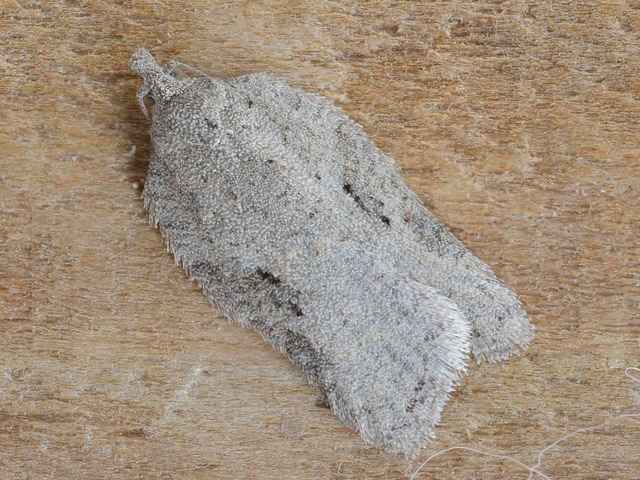 Just four days later, John Harris spotted a Mompha bradleyi (889a) at rest by the front door of his house at Hartshill (Warks). This unobtrusive-looking moth also turned out to be the second record for the vice-county and just goes to show that important finds can turn up on your doorstep! 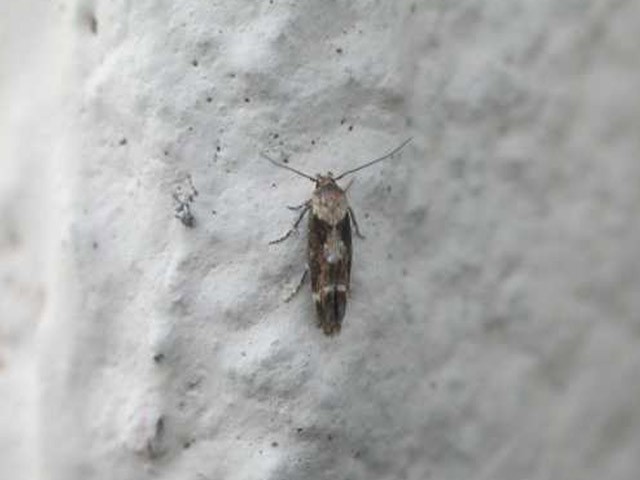 With April just around the corner, a whole host of different species will be appearing in the not-too-distant future. Readers are invited to send their first emergence dates (along with any significant trends, range extensions and similar moth news that they may have) to the author. Good luck and happy moth-ing for the rest of the spring.

* The numbers given after a number of micro moth species in the text are the British Checklist Species numbers as assigned by J. D. Bradley in the Log Book of British Lepidoptera (2000).