The second half of September saw typically mild and unsettled weather with occasional still nights, before a strong easterly airflow set in late on in the month. October continued mainly in the same vein until the final ten days, when high pressure to the east of the North Sea produced another very marked easterly airflow across Britain and ended with an icy blast from the Arctic that curtailed most moth-ing activity from the 26th. One or two short windows for potential moth immigration produced a few surprises, but there was to be no repeat of the 2011 'autumn bonanza'.

The rarest and perhaps most intriguing migrant record came from Cornwall. When inspecting a roost of Brown Long-eared Bats near Luckett around 20th September, Richard Vulliamy discovered an odd moth wing in good condition among the debris on the floor. It was soon identified as that of a Stephen's Gem, a rare migrant species from North America, one of which had been trapped on St. Mary's (Scilly) quite recently, on 12th July this year. The chances of a rare vagrant moth being eaten by a bat and subsequently discovered under the roost must be astronomical! This record, which co-incidentally was around the same date as one on the Gower (Glamorgan) in 2002, may give extra weight to the idea that the species is already breeding somewhere in the eastern Atlantic — possibly on the Atlantic islands or even the Iberian peninsula. 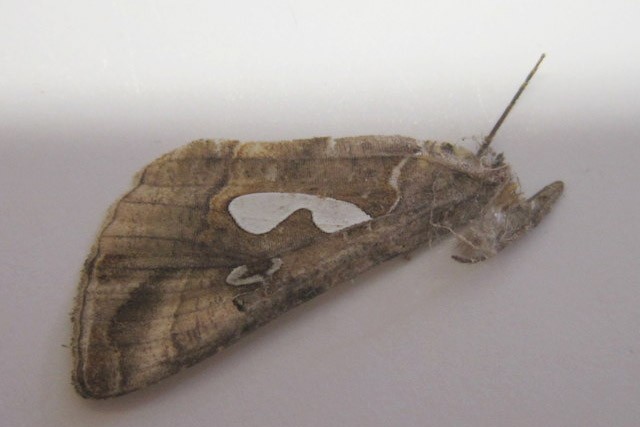 A Portland Ribbon Wave at Ferring-by-Sea (W Sussex) on 16th September was the only one reported. An afternoon's birding for Dave Foot at West Bexington (Dorset) on the 26th September did not reveal any avian rarities but a fine Crimson Speckled was found in the grass by the coastal path there. 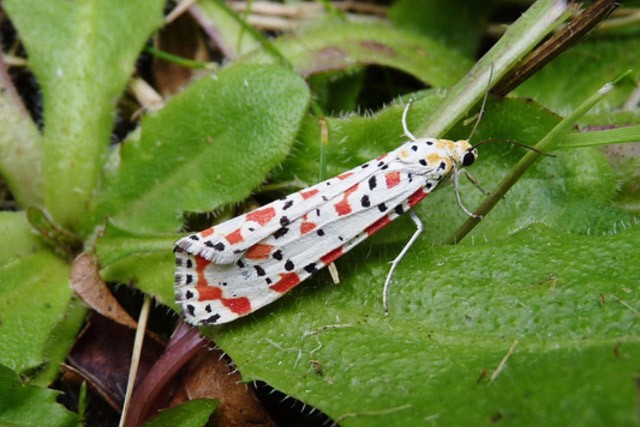 News of this tempted a few other coastal-based moth-ers into action and that night a Slender Burnished Brass was trapped on The Lizard (Cornwall). Amazingly, this was followed by another individual at the same site on 29th September, although none were reported elsewhere. 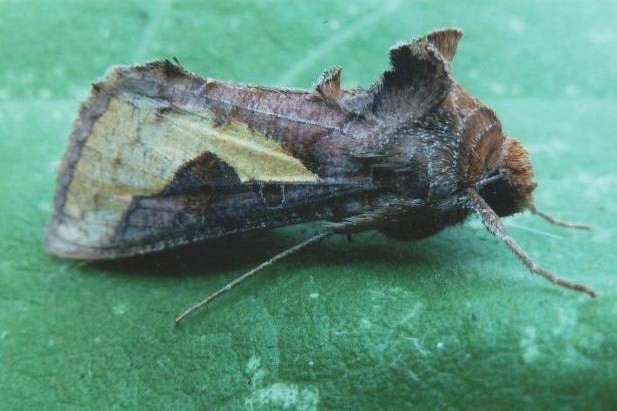 Despite these late-September highlights, migrants were generally low or average in number apart from Silver Y, which were still being widely recorded in good numbers. Some migrant species that have become temporary residents in recent years did not fare as well as last year: for example, there were just ten Clifden Nonpareil across the country. 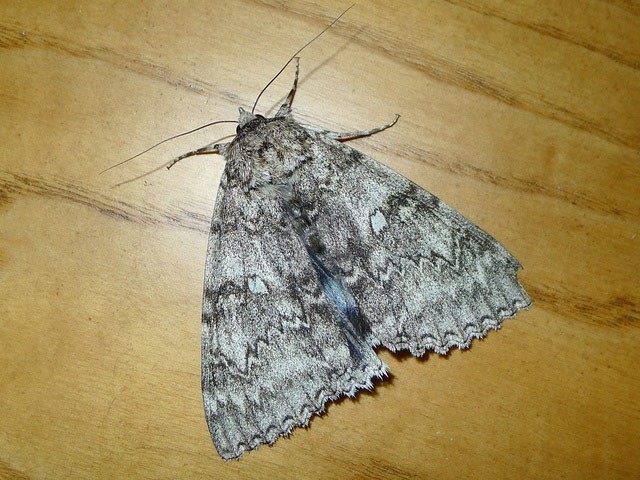 Pale-lemon Sallow have been very scarce inland this year and on the coast just a handful of migrants have appeared. 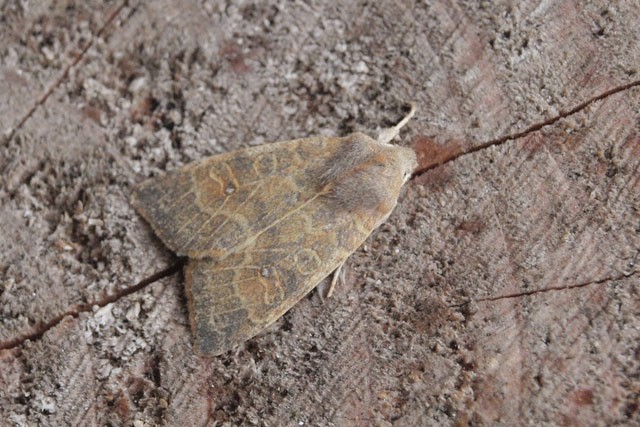 Conditions improved again around the 8th October with a minor influx of Delicate and Turnip Moth, plus many Angle Shades in places, including a peak single-night sample of 60 at Portland Bill (Dorset). Cosmopolitan were very local with 11 on Alderney around this time and three on Scilly. A Sombre Brocade at Bonchurch (IoW) on 14th October was a first for the island and, nearby, the established Dorset population had a steady if later emergence. 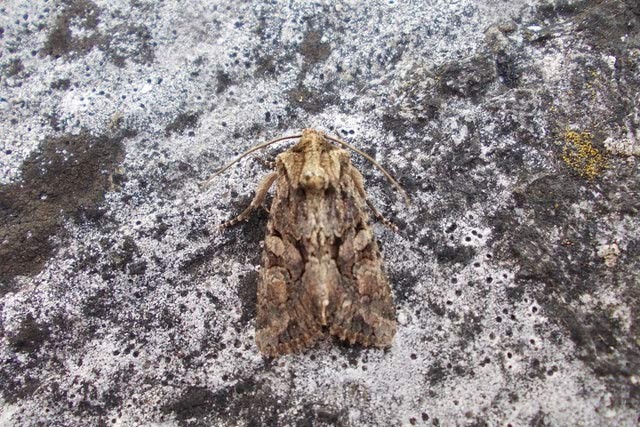 Minsmere RSPB in Suffolk has had one of the wettest summers ever and wardens there had virtually given up moth-ing duties for the year. However, a trap was run on the night of 19th October during and after a staff and volunteers' party. The following morning a Red-headed Chestnut was discovered in the trap, which was a first for the reserve and brought the Lepidoptera list total to a tantalising 1,099. 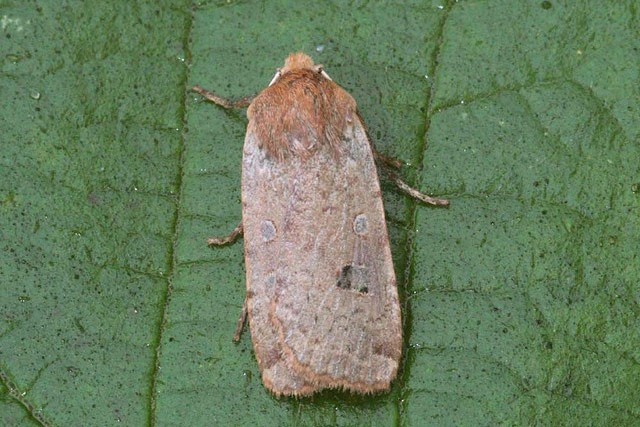 Conditions remained favourable on the Suffolk coast for the next few nights and an increased effort was made to see what else might arrive. A few regular migrants such as Gem and Dark Sword-grass were noted. Then, on the morning of 25th, a small, pale moth was found on the side of an emptied trap. In the warden's office it was identified as a Purple Marbled, not only new for the reserve but totally new to Suffolk! It was available for viewing the next day and remains the only one reported in Britain this year. What a moth to complete the 1,100! 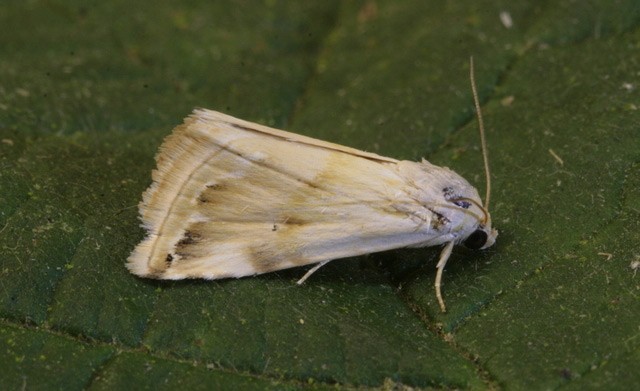 A Golden Twin-spot was at Sandwich Bay on 24th October. There were just 14 Clancy's Rustic and 16 Flame Brocade in the period, with the majority of the latter probably from breeding stock around Weymouth (Dorset). 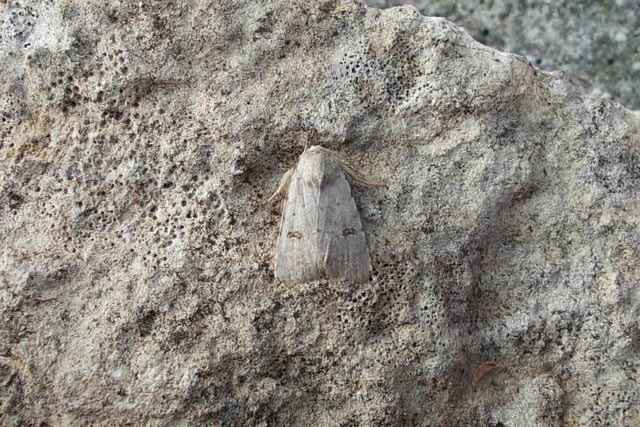 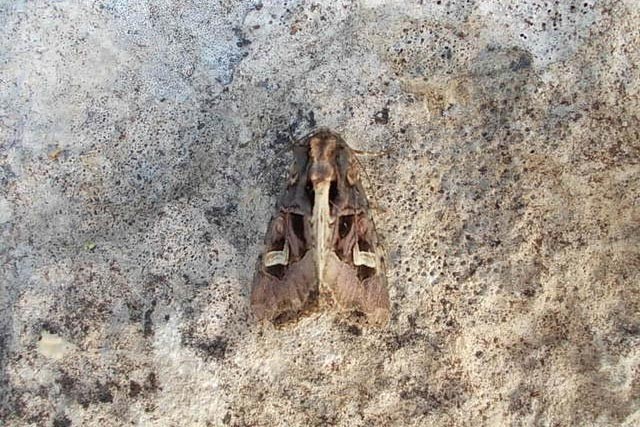 Rare migrant pyralids were represented by a single Spoladea recurvalis (1404) at Portland Bill (Dorset) on 8th October and an Antigastra catalaunalis (1400) at Bawdsey (Suffolk) on 23rd October. The final Cydia amplana (1262) was at South Hayling (Hants) on 17th September. The rare micro Blastobasis vittata (873a) was reported at Ferring-on-Sea (W Sussex) on 16th September. 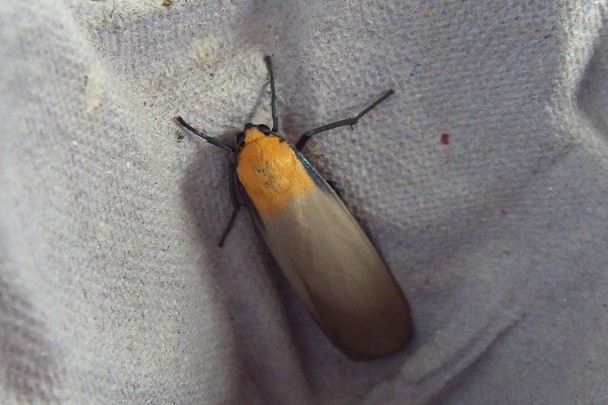 There were a few Painted Lady butterflies noted among the large numbers of Red Admirals, which included a single day count of 280 at Gosport (Hants) on 7th October. Fourteen Clouded Yellows, mainly on the south coast, included a presumed helice form at Hill Head (Hants) on 10th. A late male Lesser Emperor Dragonfly was seen at rest near the cliff edge at Tennyson Down (IoW) on 6th October. Odd Red-veined Darters continued to show at Badminston GPs and Pennington Marshes (Hants), a single was at Rewell Wood (W Sussex) on 20th September and up to 25 — probably all locally emerged individuals — were at Windmill Farm, Lizard (Cornwall).

As has been said already, many of our resident larger moths have had a poor (if not terrible) summer. However, a few bright sparks of light have emerged from the gloom. For a second year running, the Red Data species Blair's Wainscot has been recorded at Freshwater (IoW), at the very site where Blair himself discovered the species in Britain in 1945. The colony was apparently 'lost' in the mid-1950s when the marsh was drained and burned but seemingly it has hung on in a tiny corner nearby or has re-colonised from somewhere else. A Yellow-ringed Carpet came to a lit window in the central Lake District of Cumbria, near Tilberthwaite Gill on 29th September. Some autumn species have had good showings including Red-green Carpet, Cypress Carpet, Blair's Shoulder-knot and Large Ranunculus. Indeed, at Grayshot (Hants) no fewer than 67 Red-green Carpets were counted on 24th October, which more than doubled the previous county record of 31 at the same location in October 2009. 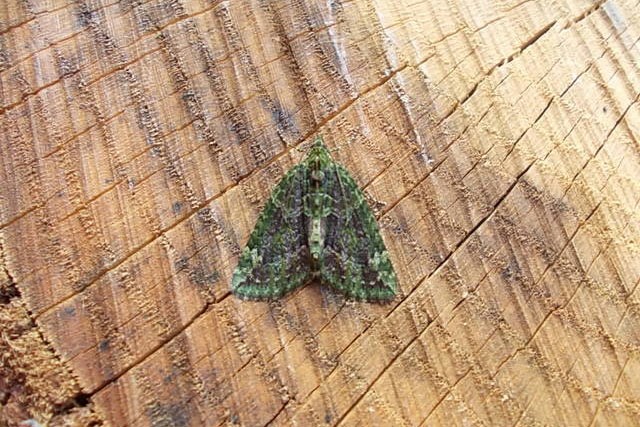 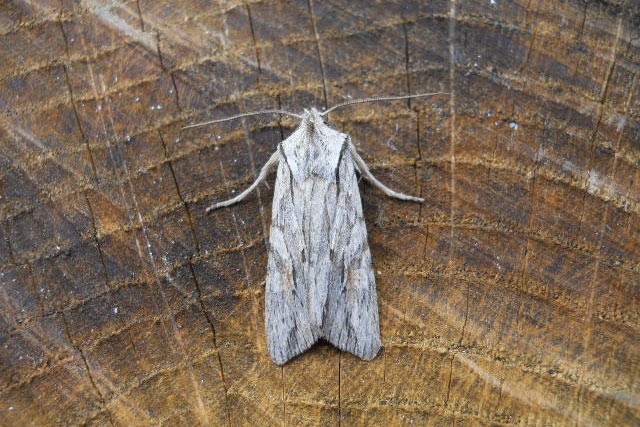 Oak Rustic continues to spread slowly east along the south coast of England with the first for East Sussex at Bexhill-on-Sea on 24th October.

A few 'summer species' have had been reported well after the normal flight season and can be seen in table 1. Contrastingly, slightly higher than normal temperatures has seen a few 'early winter' species emerge quite early, as in table 2.

Some welcome micro news came with the announcement that the very local Gymnancyla canella (1464) has been discovered on Brownsea Island NT (Dorset) this summer. Only occurring on southern sandy beaches, the larvae feed on Prickly Saltwort, which has recently colonised the island. 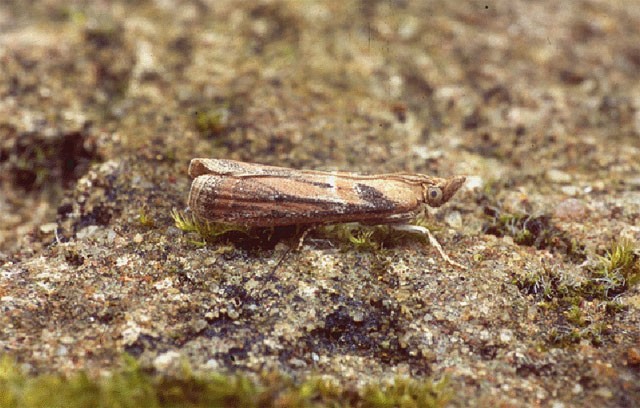 Ypsolopha horridella (456) was new to Montgomeryshire (VC47) at Middletown on 20th September. Several larval mines of the tiny but attractive Mompha terminella (881) were found at a Freston Wood (Suffolk), and were new for the county on 22nd September. Phyllonorycter platani (321a), only discovered in Britain in 1989, were found at two new sites in Buckinghamshire on London Plane trees in Aylesbury and Westcott. Only the third record in 100 years in Norfolk, a Crocidosema plebejana (1157) was recorded at Attleborough on 24th October.

At this time of year you can use an extra string from your lepidopterist's bow to look for moths. The method, which does not involve too much effort, involves checking flowering ivy for feeding moths after dark. Stands of mature, healthy, flowering ivy should be sought during the day. You can easily see the pale primrose-coloured stamens extending upright from the main part of the flower. Similar-coloured pollen, scattered on nearby leaves should be a tell-tale hint of immediate insect interest, indicating that moths should be visiting the flowers after dark. 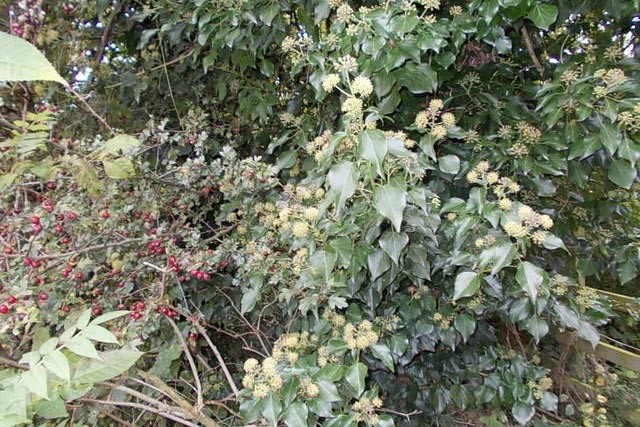 It appears that the most productive ivy is that growing up large trees near the edge of deciduous or mixed woodland. However, ivy on standalone oaks in hedgerows or even that growing along walls or up the sides of buildings can be quite good. Ivy tends to flower on south-facing aspects first before doing so later in other positions; this often results in a staggered eight-week 'feeding season' for both moths and those of us looking for them. It is best to wait until about an hour after dusk and go armed with a strong torch and long-handled net. On cooler nights many moths will be feeding at eye level and easy to identify. If you avoid sudden movement they can be almost oblivious to one's presence. Some will feed higher up and their orange eyeshine reflecting the torch beam gives them away. 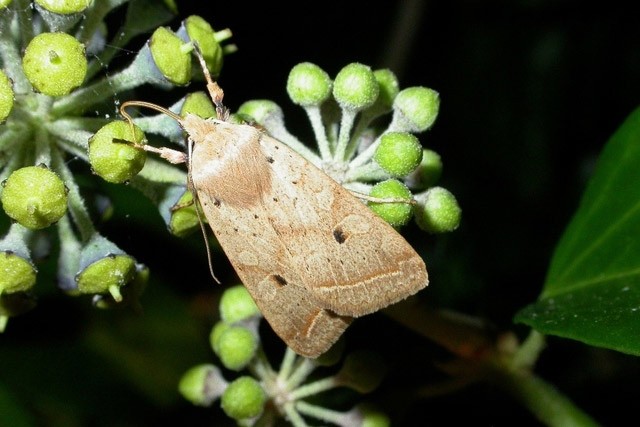 Neil Sherman inspected his local ivy patch at Ipswich (Suffolk) on 1st October and had no fewer than 88 moths of 19 species, including L-album Wainscot, Orange Sallow and Pink-barred Sallow. Dave Gilmore and Mike Powell visited eight sites in the southern Vale of Glamorgan on 11th October and had 75 moths of 21 species, which included Tawny Pinion, Grey Shoulder-knot and Large Ranunculus plus a staggering 39 Angle Shades. Other species coming to ivy can include Brick, Red-line Quaker and Beaded Chestnut. 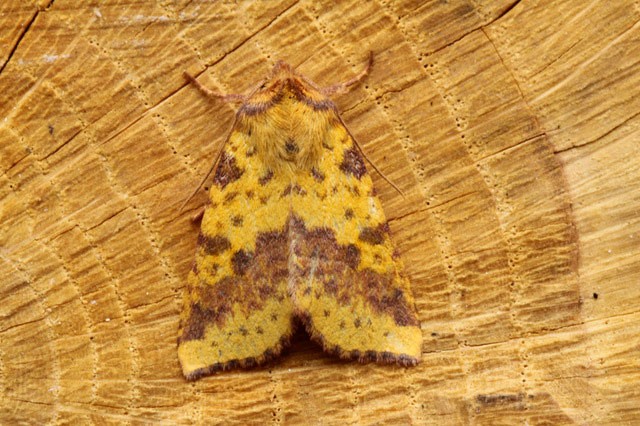 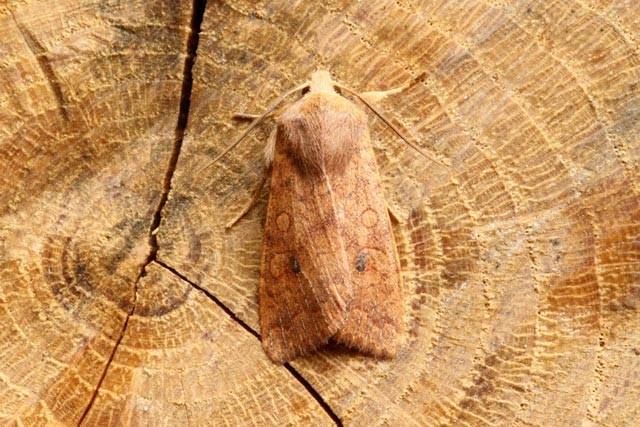 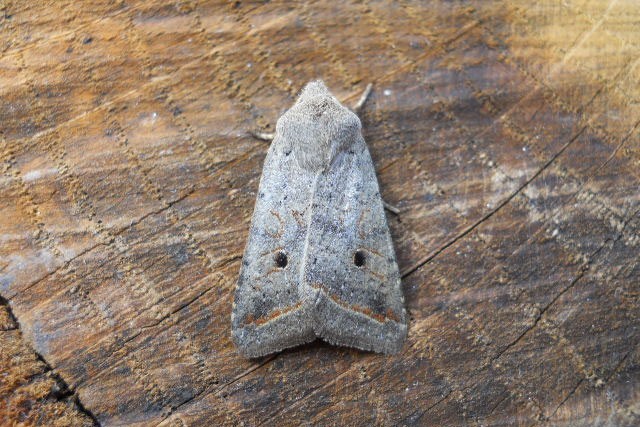 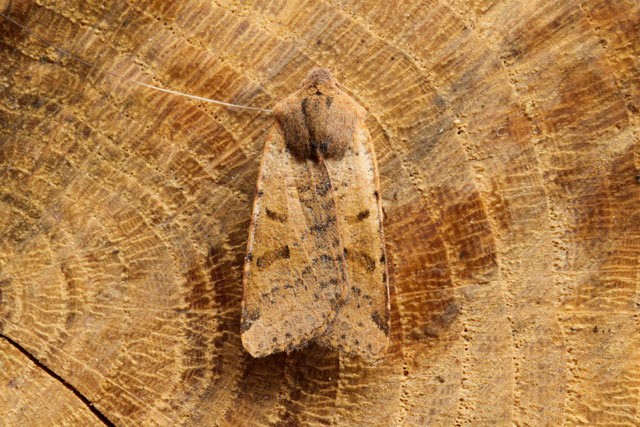