Despite the unsettled weather continuing for the entirety of a month in which the UK experienced record rainfall levels, there was nevertheless a reasonable range of migrant moth species recorded — even if many of our resident species appear to be having a hard time. A few humid nights were to be had between the deluges, and even a sprinkling of 'desert dust' was noted in some southern counties on the morning of 27th! Temperatures actually rose quite nicely in the final week, with some areas of north Kent reaching 28°C on 28th. The majority of the most eye-catching species were recorded in that final week, although a few 'notables' had at least made landfall during the earlier cool spell.

Amazingly, the only Gems reported were three together at Mynydd Aberdare (Glamorgan) on 1st. Next day, a Golden Twin-spot was on The Lizard (Cornwall). Cosmopolitans included a single at Ballinamorragh (Wexford) on 9th followed by two on Alderney (Channel Islands) on 15th. Portland Riband Waves at Chickerell (Dorset) on 10th and at Freshwater (IoW) on 27th may have been wanderers from local breeding stock. A Royal Mantle found by day at Lullingstone Golf Course (Kent) on 16th could well have been a migrant, as it was the first recorded in that part of the county since 1968!

Five Striped Hawkmoths were recorded in counties between Cornwall and Suffolk. Two Vestals were on The Lizard (Cornwall) on 20th, followed by one at Trumpington Meadows (Cambridgeshire) on 26th. A lone Blair's Mocha was at Emmer Green (Berkshire) on 24th. A Ringed Border at St. John, Jersey (Channel Islands) on 25th was yet another in a series of records at that site; contrastingly, it remains a mega on the British mainland with only two records, both recent. 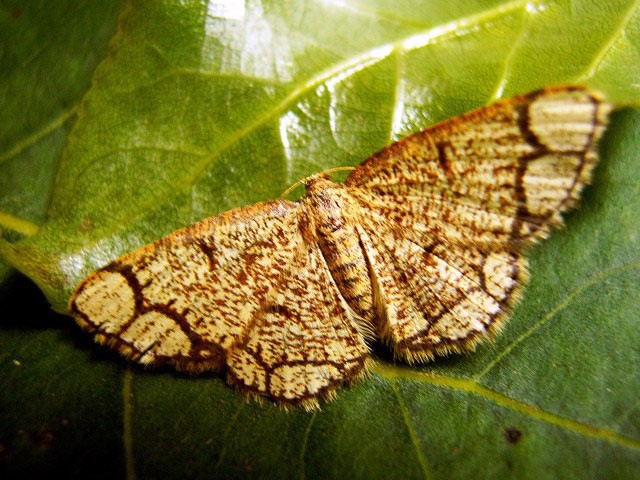 In Somerset, a Scarce Bordered Straw was at Norton Sub Hamdon on 25th, with a Ni Moth at Dundry, Bristol the following night. A Cloaked Pug at Salcey Forest (Northants) on 27th could well have been another migrant after last month's mini-influx. It was a case of saving the best until last on the night of 29th: Dave Foot's Eastern Bordered Straw at Wyke Regis (Dorset) was undoubtedly a first-brood primary migrant, possibly from as far away as North Africa, and perhaps propelled our way by the same weather the brought the desert dust that had arrived a few days earlier. This moth has been very scarce since the major influx in 2006. 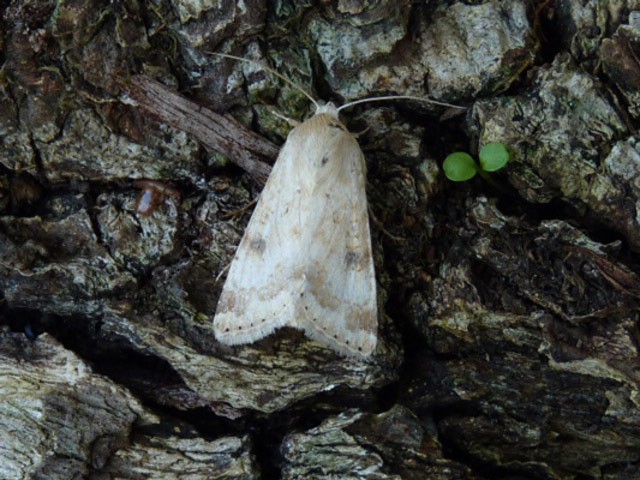 Equally as rare and more spectacular was a Spurge Hawkmoth at Sandwich Bay Bird Observatory. Kent remains the county for this species, and has been found as larvae here in some recent years. 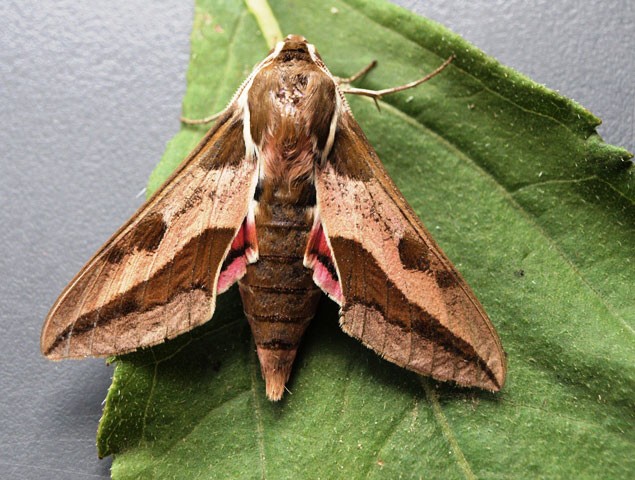 In contrast, migrant butterflies were few and far between with just three Clouded Yellow and 29 Painted Lady reported. However a Swallowtail showing well along the sea wall adjacent to Heybridge Gravel Pits (Essex) on 27th–29th was almost certainly of the European race gorganus and thus a migrant of true quality! 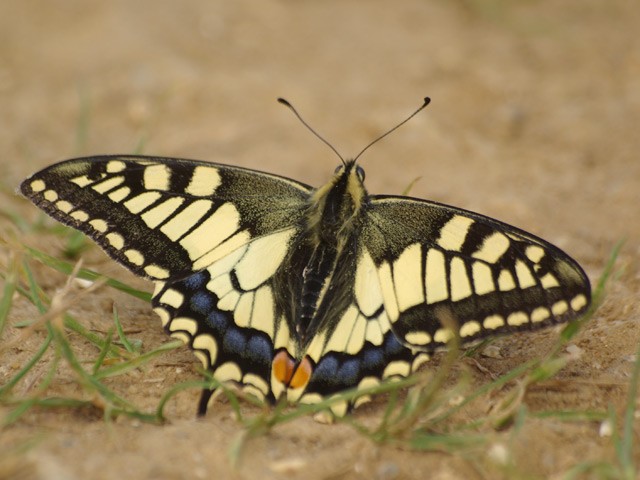 Last month's minor influx of Red-veined Darter dragonflies was reinforced with records from six new sites including at least six individuals at Kelling (Norfolk) early in the month. 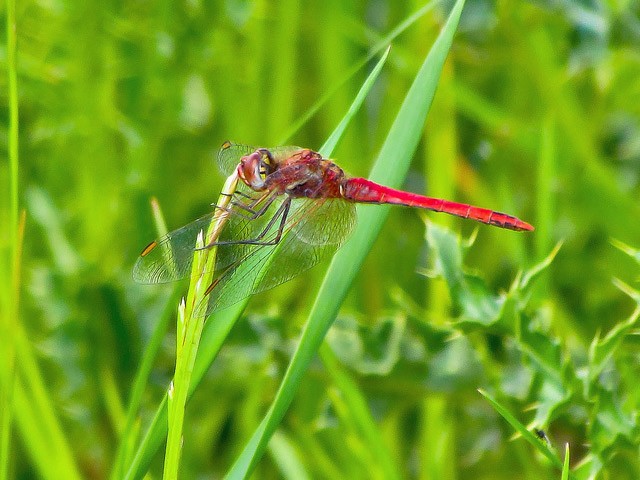 Perhaps the most exciting insect news of the month came from Suffolk on 19th when a report of a male Large White-faced Darter dragonfly at Dunwich Heath hit the airwaves. Apparently on territory in Docwra's Ditch, it had been photographed that morning at around 09:00 and had been present there since 16th. However there was dismay all round, as Odonata enthusiasts gathered from late afternoon to find the beast missing or gone and, despite a strong observer vigil next day, it was not seen again. Intriguingly this may not have been a British first, for another had been well described by a single observer further south in the county at Landguard Nature Reserve briefly on 27th May.

Garden catches of moths were generally poor, often 30–50% down on 2011. A few resident macro highlights from around the country included a Wood Carpet at Alderholt (Dorset) on 1st. A new colony of Argent and Sable was located at Coombes Valley RSPB (Staffs) early in the month. Six Lunar Yellow Underwing were caught at Blashford Lake (Hants) around 7th. A very early Mouse Moth was at Swarland (Northumberland) on 11th, with a Channel Islands Pug at Freshwater (IoW) the following night. A Red-necked Footman at Foxglove Covert (Yorks) on 17th was new for VC65. A Grey Carpet at Chippenham Fen (Cambs) on 20th was a welcome new site for this Red Data Book species. Also on 20th, a Netted Pug in Caithness (Highland) proved to be of the Orkney form ochracea and was the first in the county since 1975. An extremely late female Autumn Green Carpet at Kiltarlity (Highland) on 22nd could well have been in the tenth month of its adult life, following an extended winter hibernation! This year 'Moth Night 2012', organised by Butterfly Conservation, was aimed at brownfield sites over 22nd–24th. It was a great shame that eagerly awaited events were thwarted by cold and wet weather, and unsurprisingly results across the country were slightly disappointing considering the amount of effort put in. One of the best catches was a fine Lunar Thorn at Breakheart Quarry (Glos) on 23rd, among Purple Clay and Heart and Club. 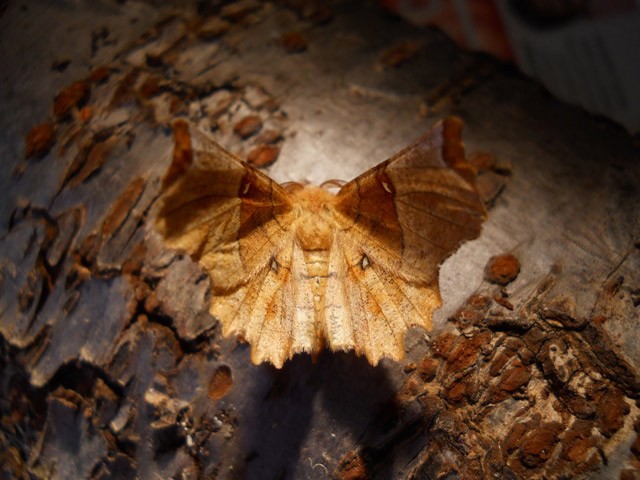 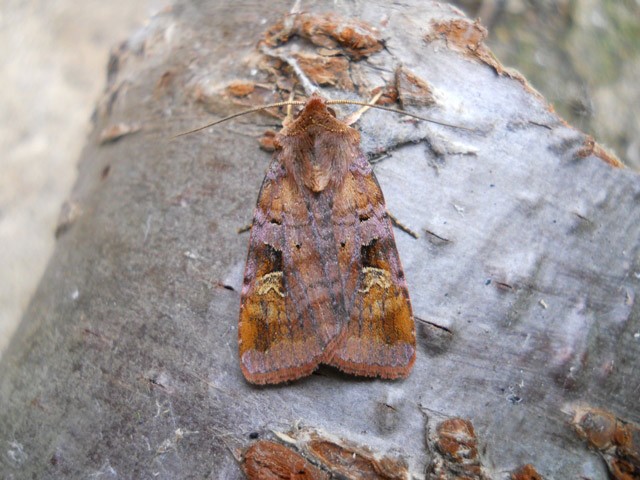 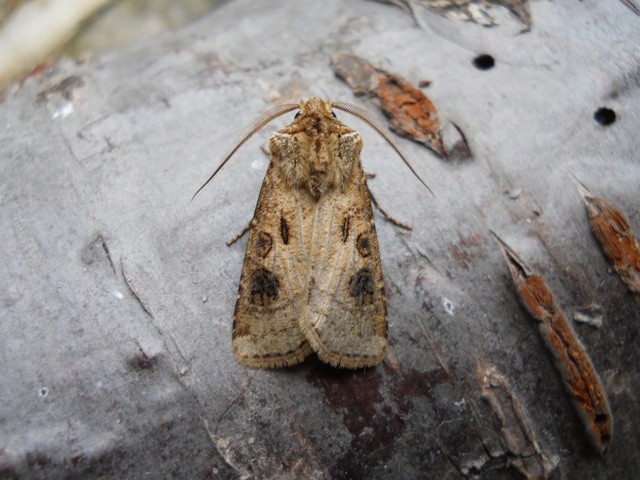 Tom Tams got lucky on Holy Island (Northumberland) on 25th as not only did he find the fourth Dog's Tooth for VC68 but also flushed an adult Night Heron out of the trap site in willows at the Snook! 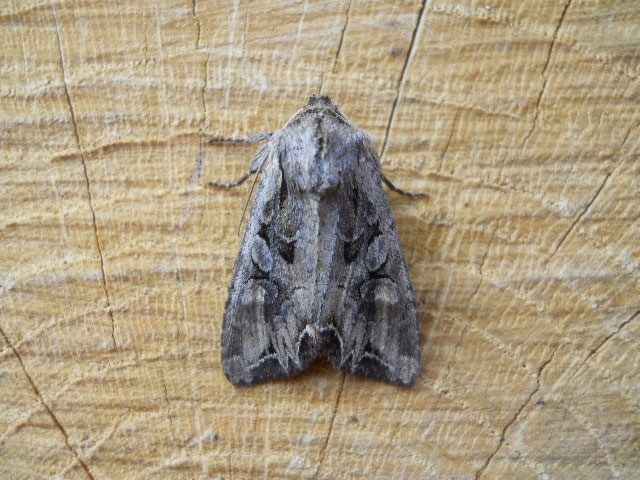 A Clancy's Rustic was at Highcliffe (Dorset) on the muggy night of 27th, with the conditions that night proving to be the most productive night of the year for moth species generally across the country. The 'Garden of the Month' award must go to Nick Smith at Woodnewton (Northants), where he recorded False Mocha, Valerian Pug, Concolorous, Mere Wainscot, Festoon and Ruddy Carpet all on 27th! 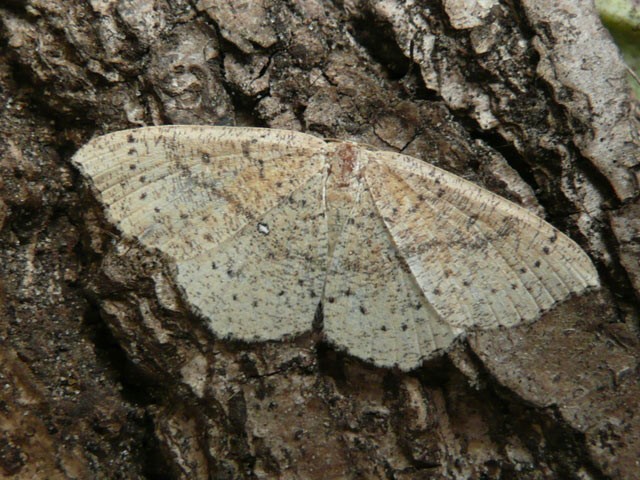 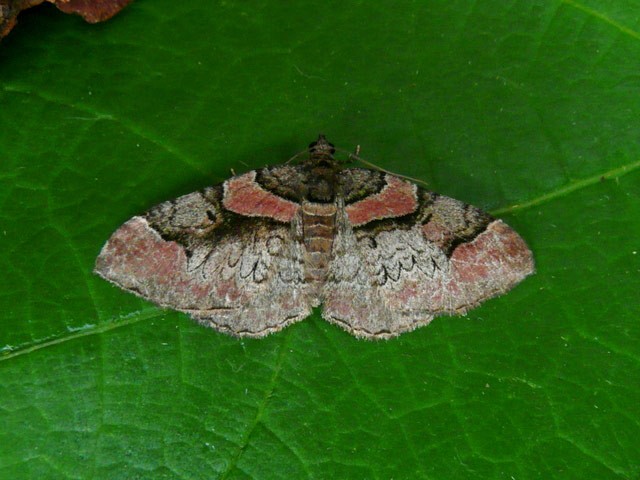 It has been a poor summer for clearwings so far. The dull, cool weather has frustrated many moth-ers keen to try out a new single pheromone lure for Sallow Clearwing — probably the most elusive species of the group. An alternative way of seeing the live moth is to collect a couple of sallow branches with tell-tale larval occupation signs at the end of winter. This has to be done in even years as the species has a well-defined two-year life cycle. A lepidopterist from Hampshire did this last February and was rewarded on 24th June with the emergence of a male from the diagnostic swelling near the tip of a carefully nurtured twig. 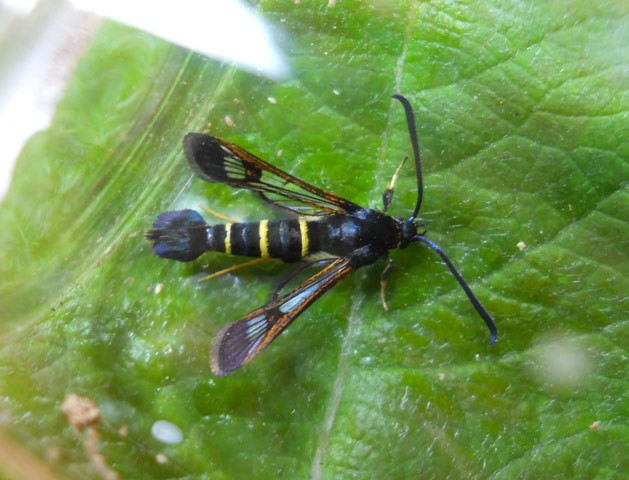 The Butterfly Conservation West Midlands Branch's Welsh Clearwing event was again led by Dave Jackson on 24th, with the group assembling near the Stepping Stones on Cannock Chase (Staffs) in the late morning. Some sunny spells in between the cloud produced enough warmth for three adult males to be attracted to pheromone lures after a wait of just one minute! 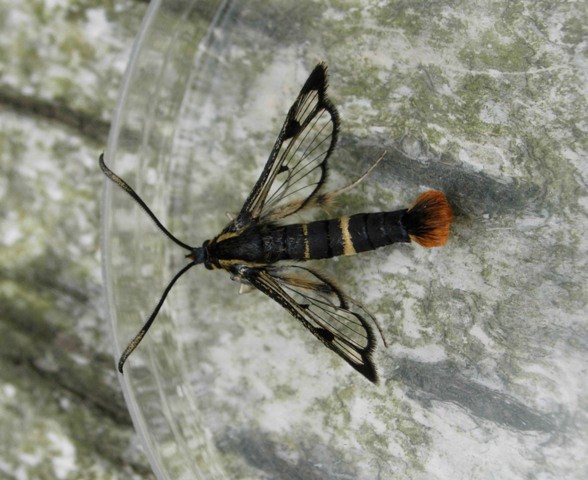 Good news came from the Channel Islands where, after several years of trying, a Dusky Clearwing was finally attracted to the 'Tab' lure on Grouville Common, Jersey on 28th. This former British resident could reoccur on the mainland at any time, with aspen and poplar woods in southeast England presumably being the best places to search.

As many of us get to grips with the new micro-moth book, some interesting discoveries and range extensions were made. Three males of the poorly known Trifurcula headleyella (44) swept from grassland at Rough Bank Nature Reserve (Glos) on 4th were new for the county. A Spuleria flavicaput (904) was a Northumberland first at Big Waters Nature Reserve on 5th.

Also in Northumberland, a Cydia coniferana (1268) at Harehope on 13th was the first in the county since 1924!

In Yorkshire, a Strophedra nitidana (1222) at Bishop Wood on 19th and an attractive Mompha locupletella (882) at Ripon on 26th were new to VC64 and VC65 respectively. A rare Chrysoclista lathamella (902) near Eastham (Worcs) on 24th was not only a county first but also nationally significant, considering the few recent records of this species.

A Leek Moth (473) finally made it to Lancashire at Crosby on 25th. This pest species is slowly spreading north, possibly making use of onions and leeks increasingly being grown in domestic gardens.