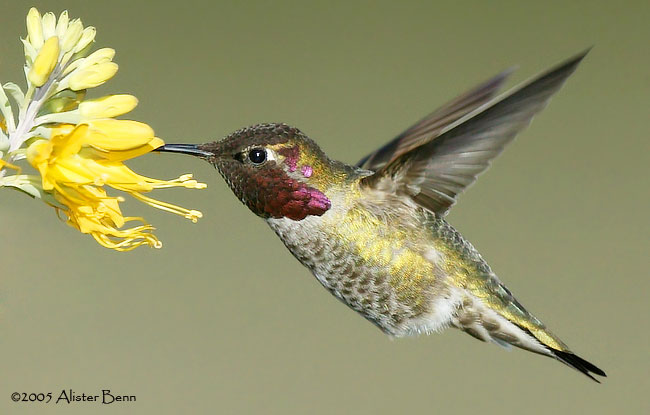 Anna's Hummingbird: There are in the region of 320 species of hummingbird in the world, all of which are to be found in the New World, from Alaska in the north to Tierra del Fuego in the south, though most occur in the tropics. Despite the fact that 18 of the world's hummingbirds have occurred in North America, there is perhaps only one that has a remote outside chance of occurring in the Western Palearctic. The Ruby-throated Hummingbird Archilochus colubris has been recorded 8 times in Bermuda, and is rare in Cuba, Bahamas and Hispanola. It is eastern North America's only species of breeding hummingbird, and is a summer resident from central Canada to the Gulf Coast. Despite their tiny size, these birds undertake a lengthy migration to their main wintering range along the western Gulf Coast south through Central America (photo: Available Light Images).

Each year we receive reports to our news service of hummingbirds. The finders are convinced of the identity of what they've seen and are obviously excited about recording one of these tiny birds on this side of the Atlantic.

However, what these observers do not realize is that they've just been tricked by one of the most frequent instances of mistaken identity on our shores. They've not actually seen the first ever Western Palearctic record of a hummingbird, but they've been conned by a rather large, but unassuming, moth. What they've seen is a Hummingbird Hawk-moth Macroglossum stellatarum. This day-flying moth has a long proboscis and its wing-beats during hovering make an audible humming noise. On close inspection it can be seen that this master of confusion is brown, with a white-spotted abdomen, brown forewings and orange hindwings. Darting from flower to flower adds to the illusion that the observer is actually watching a species of bird rather than a moth. 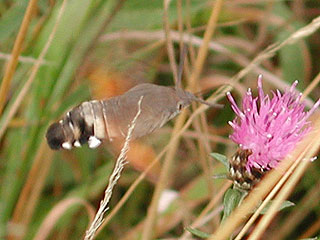 In the British Isles these migratory moths occur every year in variable numbers, and can even reach the Northern Isles and Outer Hebrides. Numbers vary from year to year, the majority being seen between June and September, though they can be recorded at other times too. They also breed in the UK and in mild winters some may overwinter, but the bulk of our sightings originate from southern Europe.