A cool start to November was followed by a much milder spell mid-month with ample trapping opportunities, before an extremely wet period set in and caused extensive flooding across the UK. The first half of December was settled and much colder, with night-time temperatures dropping well below freezing almost everywhere. Very wet, rather cool and unsettled conditions then prevailed in the approach to the festive period.

Andrew Crory has been moth trapping at Murlough NNR (Down) for about 12 years. The reserve is perfectly placed off Dundrum Bay on the southeast coast of Northern Ireland, and is probably the best site for lepidoptera in the province. The 270-hectare dune heathland site with some scrub and woodland has recorded 22 species of butterfly, including Marsh Fritillary and Cryptic Wood White. Andrew decided that this year he would put in greater recording effort, trapping more often and for longer in an attempt to bring the combined moth site list over the 500 species mark. This was achieved in September and included four new micro-moths for the reserve and a second national record of Blood-vein. After 300 nights and many early mornings, Andrew was finding the final going tough but once more did his pre-work trap inspection on the morning of 8th November with no great expectations. However one moth immediately stood out like a sore thumb: a well-marked plusia with a diagnostic double-lobed white discal mark on each forewing. It was soon identified as a Stephen's Gem — the first for the island of Ireland. 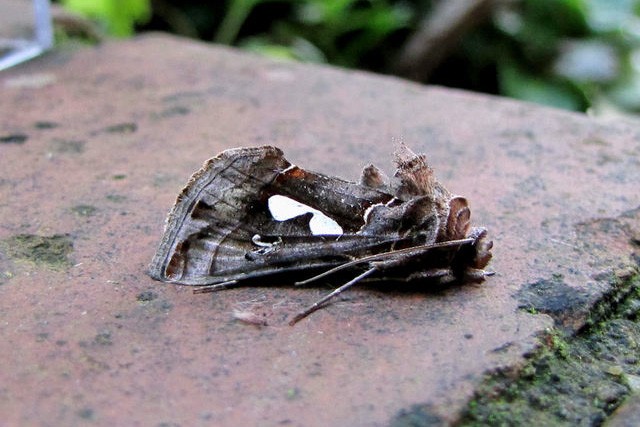 This record completed a UK hat-trick for this species this year and was the eighth British record. It is thought that this individual was a primary migrant from North America as the weather conditions before its arrival had included the aftermath of Superstorm Sandy. Amazingly, the first of two Buff-bellied Pipits was discovered three days later just a couple of miles away at Tyrella, and both Blackpoll Warbler and Cedar Waxwing were found in the same garden in Mayo on 9th and 10th November respectively. Whatever these vagrants' origins, the Stephen's Gem was a spectacular and deserved reward, bringing the new reserve moth-list total to 530.

Elsewhere, November excitement was a little more muted but a trickle of migrant activity included a Cosmopolitan at Longstones, on St. Mary's (Scilly) on 7th, a Ni Moth at Bracklesham (W Sussex) on 12th, a Golden Twin-spot at Paignton (Devon) on 11th and a Vestal at East Lulworth (Dorset) on 16th. 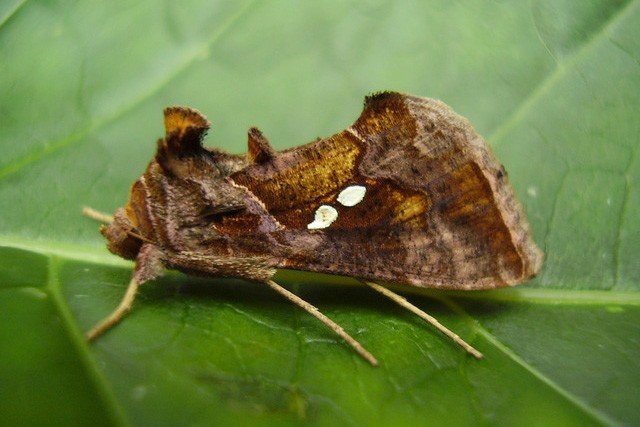 Several late Blair's Mocha at Bracklesham (West Sussex) in the first week of November will have been late emergers off local holm oaks. Oak Rustic again wandered from known breeding areas and included a second for Kent at St. Margaret's at Cliffe on the 12th and one the previous night at Findon Valley (West Sussex). Another at Preston (Dorset) on the 16th was the first in the Weymouth area since 2010 despite plenty of the foodplant in the area. 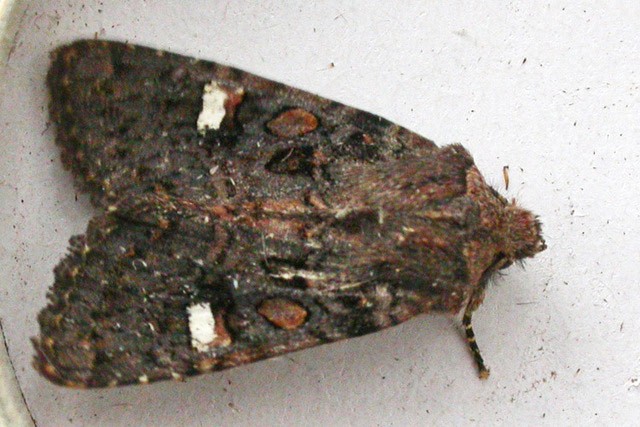 Another presumed (very recent) colonist — Black-spotted Chestnut — was again recorded in the New Barns and Dartford areas of Kent, with five individuals found between 7th and 16th November. Local moth-ers had hoped that this species might have further extended its range but despite some effort in the county it has not been found at any wider locations. It will be interesting to see whether any are found after the species' hibernation period next spring. 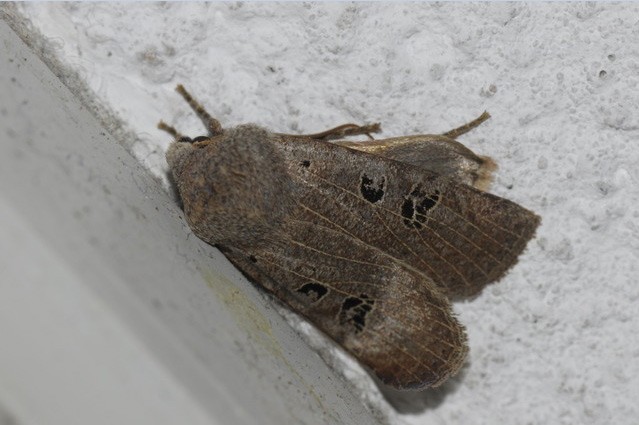 The only mainland White-speck reported was at East Lulworth (Dorset) on 18th November, but a healthy 244 were counted at Longstones, St. Mary's (Scilly) during the month. The final 'event' of the year came when Portland Bill Bird Observatory warden Martin Cade foresaw a narrow window of mild weather in early December and decided to run a few traps on the evening of the 2nd. Next morning, only four moths were in the traps but amongst single Angle Shades, Beaded Chestnut and Black Rustic was a pristine Radford's Flame Shoulder — the third for Portland and around the 25th for Britain. The two previous island records had both occurred on 12th November, one in 2001 and another in 2004. This year's becomes the latest ever British record and provided an early-winter bonus to a small band of moth-twitchers that just had started to feel the first pangs of moth cold turkey! 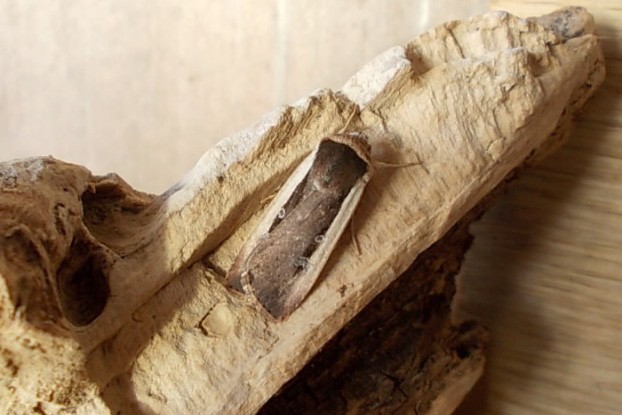 The Antipodean pyralid Musotima nitidalis was a rather a surprise catch at Harlow (Essex) on the night of 13th November. This adventive species, which has only been recorded twice before, is presumed to have arrived with imported exotic ferns. 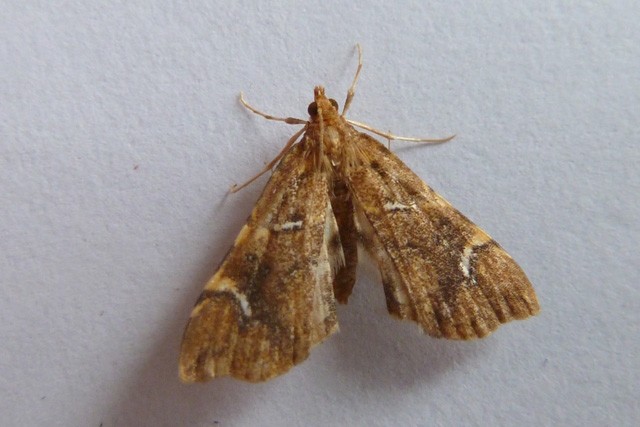 November Painted Lady butterflies were at Totnes (Devon) on 1st and at Peasmarsh (East Sussex) on 9th. Red Admirals stayed on the wing in many counties, especially Sussex and Hampshire, where no fewer than 10 were counted around Gosport on 6th November. Singles were still out and about on 17th December in East Grinstead (W Sussex) and Lewes (E Sussex).

Cypress Carpets have seemingly done quite well in several southern English counties and five at Poole (Dorset) on 13th November is proof that many have emerged quite late. 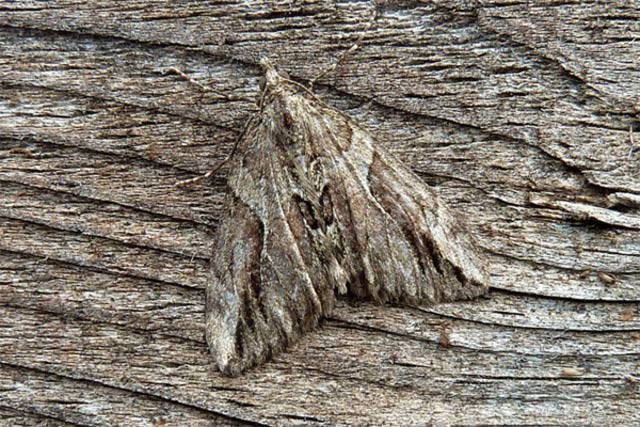 Angle Shades have had a great late autumn in some places, especially in Northumberland and North Yorkshire, where several double-figure counts were made in mid-November. Black Rustic and Beaded Chestnuts were recorded into December in several counties. After a single count of 28 Brindled Ochre was made at South Glendale, South Uist (Outer Hebrides) in October three were still avoiding hibernation there on 11th November. A large noctuid found dead, with its wings frozen into the surface of fresh frozen snow at 3,000 feet on the upper slopes of Chno Dearg at Glen Spean (Highland) on 28th November, was presumed to be a female Brindled Ochre — a remarkable find that prompts one to wonder how on earth did it get there? 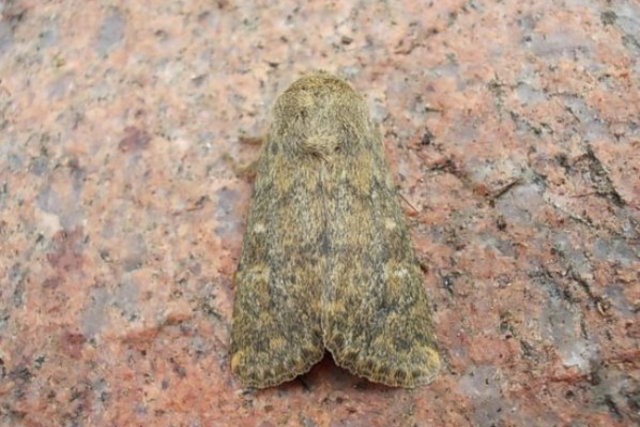 Further Plumed Prominent successes came from Buckinghamshire where seven were found near Marlow on 7th November; a single at The Sheepleas (Surrey) the night before was the first record at that site since 2005. The author finally managed to record his 'bogey moth', Grey Shoulder-knot, at his Warndon (Worcs) garden on 12th November. It was not even in the trap, but concealed in a small recess in the patio door frame! The same garden is normally a good bet for Figure of Eight and even in a bad year for garden moths a peak of four on 8th November was a welcome relief. 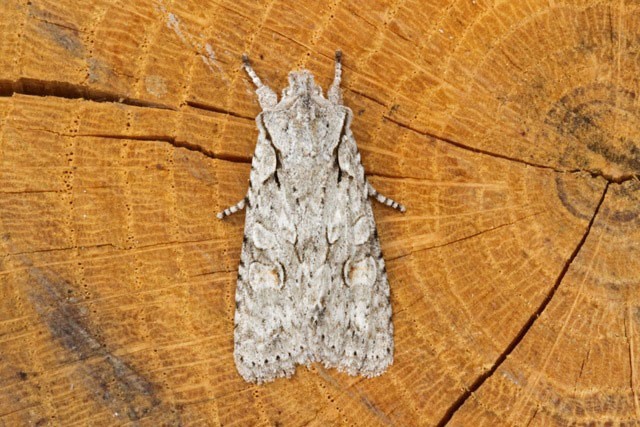 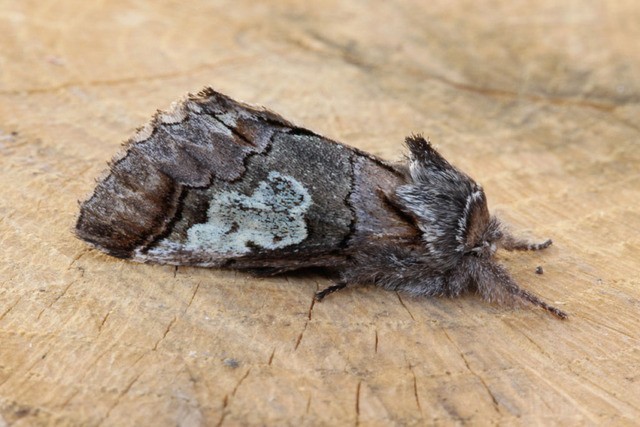 A Bloxworth Snout at Newhaven (E Sussex) on 17th November was notable. The rather damp and quite mild conditions of mid-December tempted Red Sword-grass to wander, with one at Swarland (Northumberland) and two at Withiel Florey (Somerset) on 15th. Chris Manley took advantage of these conditions and placed two traps in a Glamorgan woodland on the evening of the 15th and was rewarded with 74 December Moths, 10 Winter Moths, 8 Mottled Umbers and 5 Chestnuts by 22:00 despite heavy showers! This just shows what a small amount of field effort in midwinter can produce in the right place. 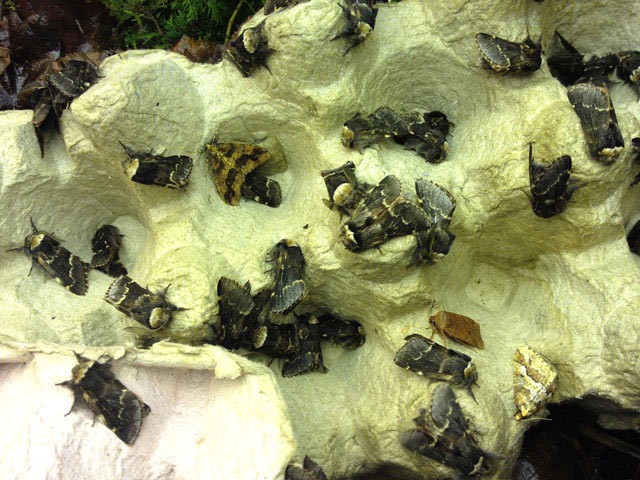 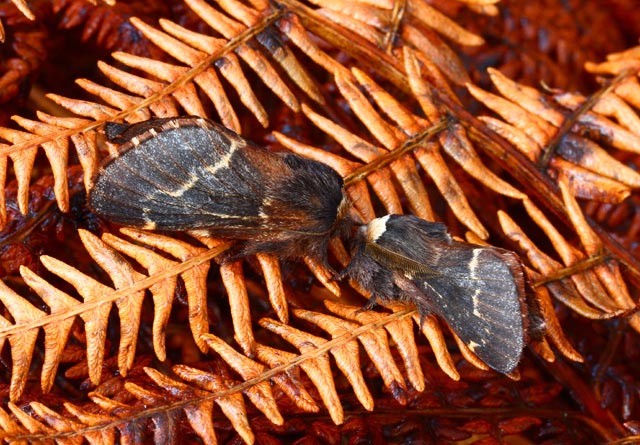 John Bebbington found an interesting inhabited cocoon protruding from one of several corncockle seed-capsules collected from his allotment at Curry Rivel (Somerset) on 2nd December. Just three evenings later it emerged as a pristine Silver Y! 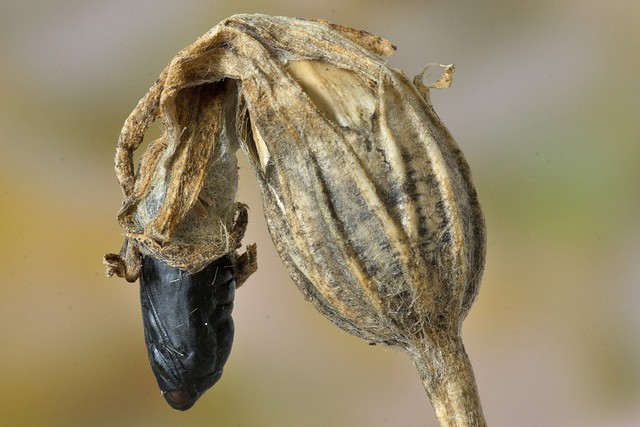 Many moth-ers will be eagerly waiting to see what sorts of Burnished Brass they will find in 2013. According to Clancy (2012), the form where the two iridescent-coloured bands are joined by an 'isthmus' of colour 3mm or more wide are candidates for the sister European species, Fused Burnished Brass; and apparently candidates from both Kent and Inverness-shire have recently been shown on close examination to be of such a form. Other schools of thought maintain that this separation is only possible by molecular analysis, so it may not be as straightforward as first proposed. One good candidate was photographed in northern Scotland last summer. 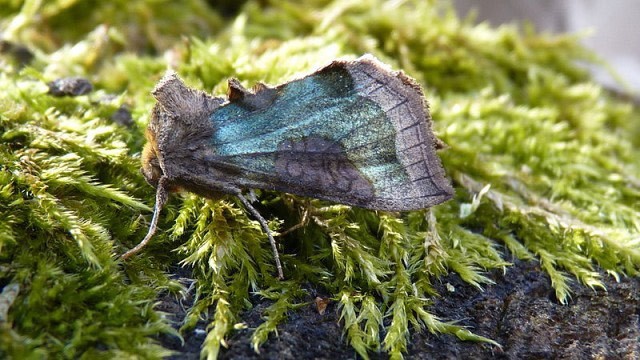 Although we are pretty close to the end of the moth-er's year, at least two spring species have already shown up. November Common Quakers were at Ashford (Wicklow) on 8th and at Charlecote (Warks) on 14th. In December, Hebrew Characters were at Ashford (Wicklow) on 8th and Chickerell (Dorset) the next night. Quite a few British macro-moths have had extended seasons and these species are tabulated below, along with the last reported dates for true autumn species that do not completely over-winter as adults.

A few micro-moth species also occurred on late dates, and those that do not completely overwinter as adults are shown below.

We are now entering the (hopefully) short midwinter moth hiatus, and you may be wondering how to pass the time. Firstly, you should make sure that all of your moth records for 2012 are sent in to your Vice County Recorder — a list of whom is available online. County Recorders prefer records entered onto a single county format of Mapmate, although they can easily deal with Excel spreadsheets.

The winter lull is always a great time to ensure your pots are washed and clean, ready for the coming spring season. It's also a good time to try to identify those difficult moths you photographed over the year and left for later — and, while you're at it, why not ensure you have our Moth app installed on your iPhone, iPod or iPad! You may also wish to browse through all your best digital images and upload some of them to our very own Iris galleries — we're always keen to receive new submissions. Since the live launch in August, 596 species of Lepidoptera, 70 species of Odonata and 169 species of other arthropods have now been uploaded, and BirdGuides wishes to thank all those who have contributed so far. We hope to see many more in 2013, and don't forget you are more than welcome to email Steve Whitehouse with your first dates for moths seen in the new year.