The warmer weather of mid-August ascended into a mini-heatwave during the third week, when temperatures in southeast England hit 30°C on 19th. Warm air 'mushroomed' in from the south and with this came an influx of rare migrant moths as well as a few iconic wandering butterflies. For a few days there were exciting times as rare Marbleds rolled in and took the headlines. Furthermore, a good selection of more typical late-summer species included a formidable influx of the migrant tortrix Cydia amplana. High pressure was never far away as September arrived, although the short Indian summer was curtailed by the remnants of Atlantic tropical storms sweeping across the UK, giving a typical autumnal feel from the second week.

With only one previous (and slightly tainted) record, it was great news when three Shining Marbled arrived across a broad front on 19th August. This species has recently extended its western European range as it has moved north into Denmark. First to hit the airwaves was Mary Atkinson's superb find at Downgate (Cornwall), which had initially escaped from her trap but was luckily recaptured in long grass at the base of a neighbour's fence! An even smarter individual was found at Worthing (W Sussex) and this was followed by news of a third at Dymchurch (Kent). 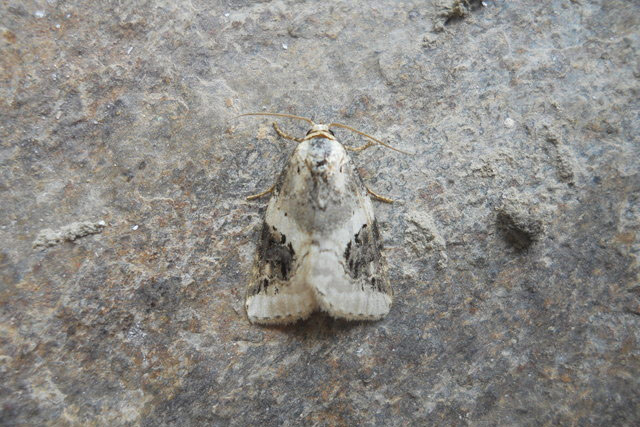 Around this time, no fewer than ten Beautiful Marbled were recorded between Suffolk and the Isles of Scilly, while a single Small Marbled at Bawdsey (Suffolk) on 26th August was, amazingly, a county first despite last year's major national influx. 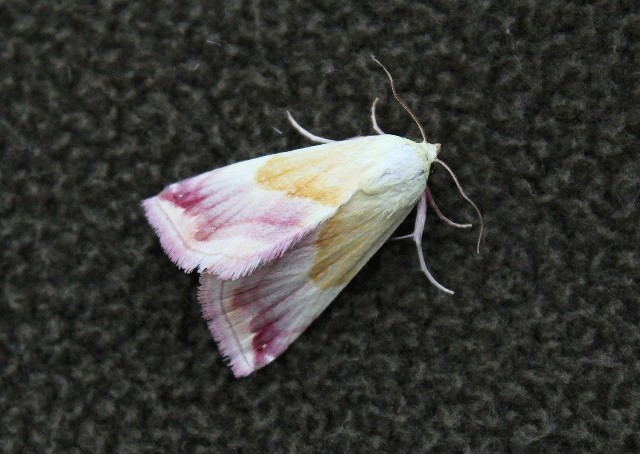 Not as rare as Shining Marbled but perhaps even more attractive is the Pale Shoulder: individuals were found well inland at Kensworth (Beds) on 19th August and the next one at Bexhill (E Sussex). This species has occurred regularly in very small numbers since 1994. 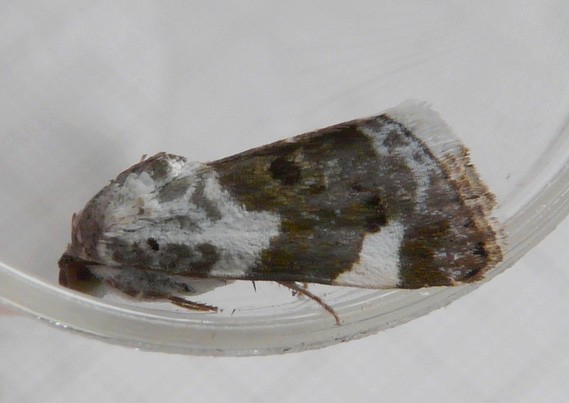 A Three-humped Prominent stole the show on the east coast when it was trapped at Bawdsey on 18th August; it was the first individual of 14 since 1900 to instigate a multi-twitch, with at least seven carloads making the journey to the Suffolk coast. The moth did exhibit some damage to one wing which, unlike on rare birds, is good evidence of vagrancy! 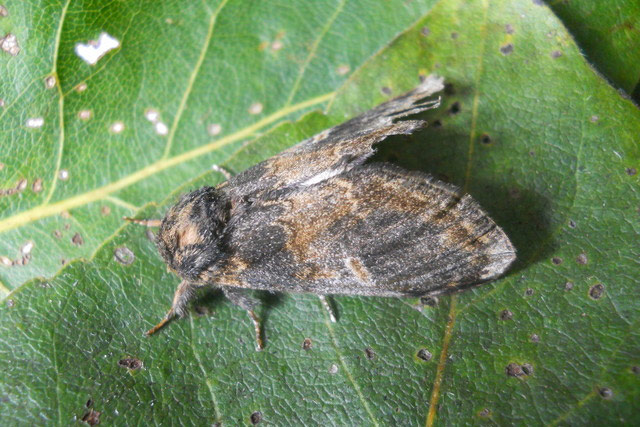 An immaculate Tamarisk Peacock at Bexhill (E Sussex) on 18th August was a typical southeast-coast record of what is a potential future colonist — there are still fewer than ten British records. 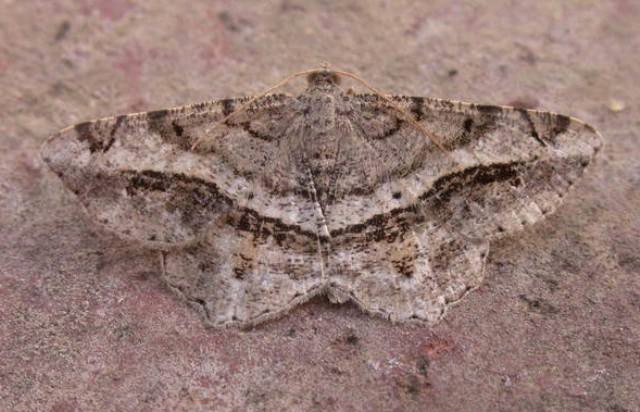 Following early August's Latin, the next pointer towards the impending immigration was a Marbled Grey at Sandwich Bay (Kent) on 12th August, followed shortly by a fine migrant Portland Moth on 16th. It was great to see another constant effort site again getting just reward. 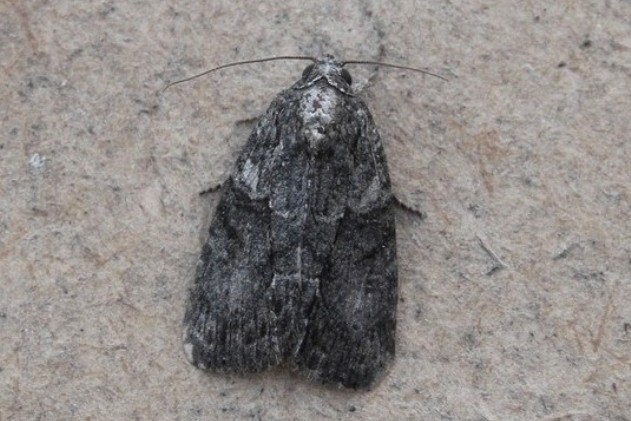 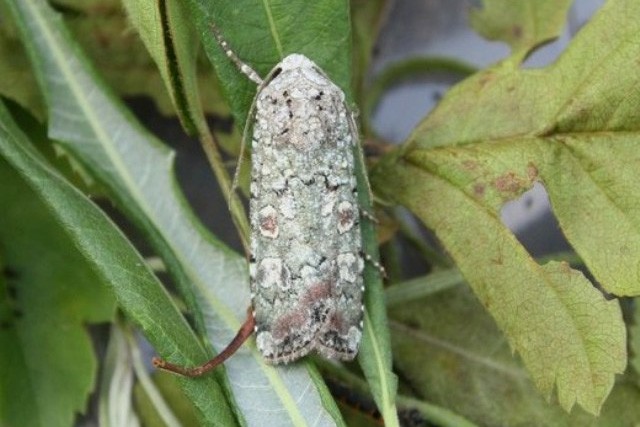 Surprisingly, only one Great Brocade was recorded during the period, at Hollesley (Suffolk) on 13th August. An Orache Moth was at Freshwater (IoW) on 17th August, with a Great Dart identified among the catch at Sandy Point (Hants) the same evening. This species has recently declined somewhat in its numbers as a migrant, but probably still breeds on the Channel Islands. 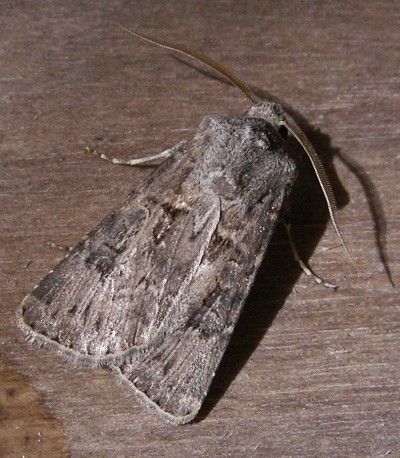 Also of note were Dusky Hook-tips at Sissinghurst (Kent) on 19th August, with another in the county at Saltwood the following evening. Golden Twin-spots were also in Kent at Densole on 15th August and again at Ramsgate on 5th September. Five Blair's Mochas included one well inland at Kenilworth (Warks) on 20th August. A bumper crop of eight Jersey Mochas included two together at Sissinghurst (Kent) on 19th August. 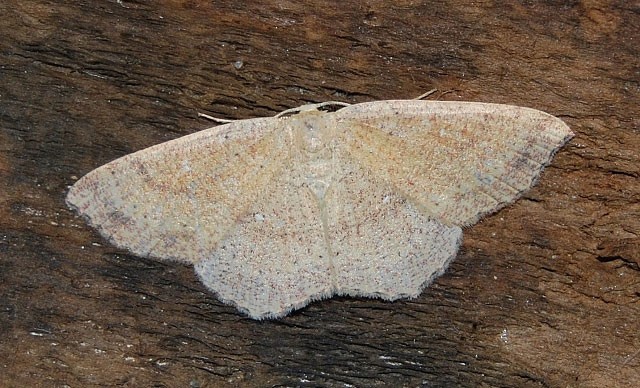 Although well publicised as a breeder in west London, where local councils have become paranoid about the health risks associated with their toxic-haired larvae, Oak Processionary is also a rare migrant. Singles near Hemsby (Norfolk) on 12th August, at Dungeness (Kent) on 18th and at Bradwell (Essex) on 20th were good examples of this. 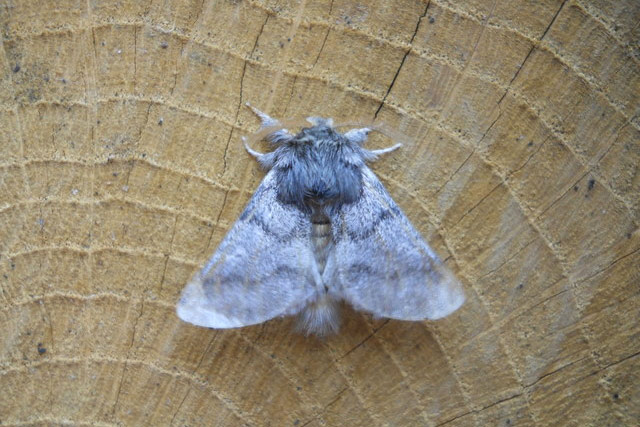 Gypsy Moth is another Thames Basin adventive colonist with a Defra price tag on its head, though singles at Portsmouth (Hants) and Banstead (Surrey), and three on the east Kent coastline, during the warmer period were presumably migrants. Arguably the most 'boring' of all rare migrant macro-moths, the Porter's Rustic, had a reasonable showing of five individuals including one at Royston (Herts), a well-spotted county first. 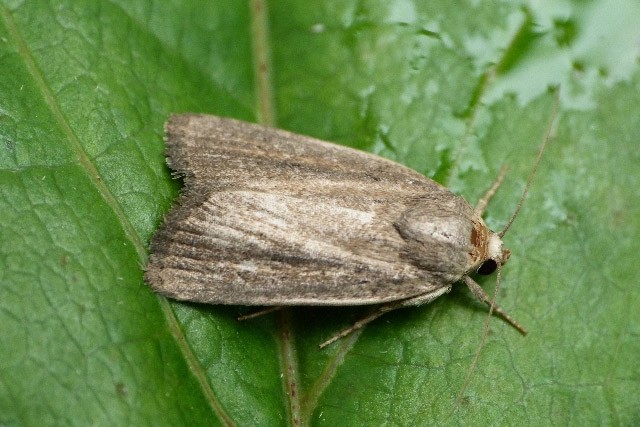 Migrant Rest Harrows were at Bradwell (Essex) on 17th August and at Dungeness (Kent) on 4th September. A Four-spotted Footman was well away from its south-coast breeding areas on the Lleyn Peninsula (Gwynedd) on 24th August. An early Pale Lemon Sallow was at Hemsby (Norfolk) on 13th September.

Though no adults have yet been reported this summer, a Death's Head Hawkmoth larva was found by day on 20th August at Three Oaks near Hastings (E Sussex). It was fully grown and was placed in a container with clean soil, in which it immediately pupated. Is hoped the adult may emerge at some stage either later this autumn or perhaps more likely next spring. 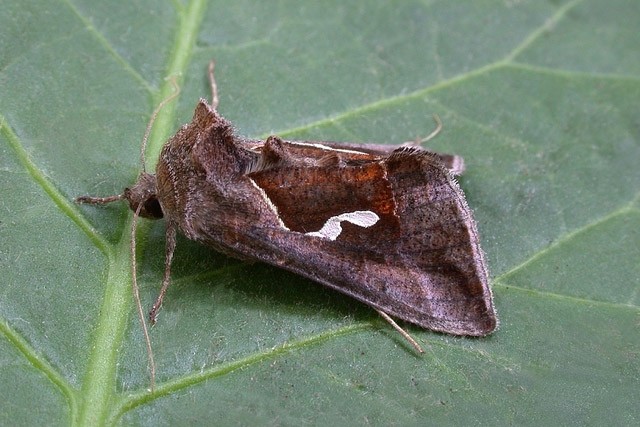 At least a dozen Dotted Footman well away from their known breeding sites were probably migrants, as were Dark Crimson Underwings at Sandy Point (Hants) on 13th and Dorchester (Dorset) on 20th August. Many recorders noticed Latticed Heaths in traps and an astounding 50 were counted in a garden at Densole (Kent) on 4th September. The most obvious migrant was the Silver Y, with large numbers right across the country; thousands were noted by day around Land's End (Cornwall) and on Portland (Dorset).

Even though there were a few species of migrant micro-moths during this period, one in particular broke all previous records. Cydia amplana (1262) was only seen in Britain for the first time in 1990. Since then, there have been a few minor influxes and records do appear to be on the increase. The warm spell in mid-August coincided with its peak emergence and the few recorded in the first ten days heralded a huge immigration of what was once a rare moth. The influx probably peaked on the 17th August when 107 were logged on Portland (Dorset) alone! Elsewhere, several other double-figure counts were made in Dorset, Hampshire and on the Isle of Wight. At least 640 were reported throughout Britain and another 83 were at a single site on Alderney (Channel Islands). One reached Lealholm (N Yorks) on 16th August and was the first for VC62. At least six were in Somerset and four were found as far west as Gorseinon (Glamorgan). A few penetrated the Home Counties of Berkshire, Hertfordshire and Surrey. 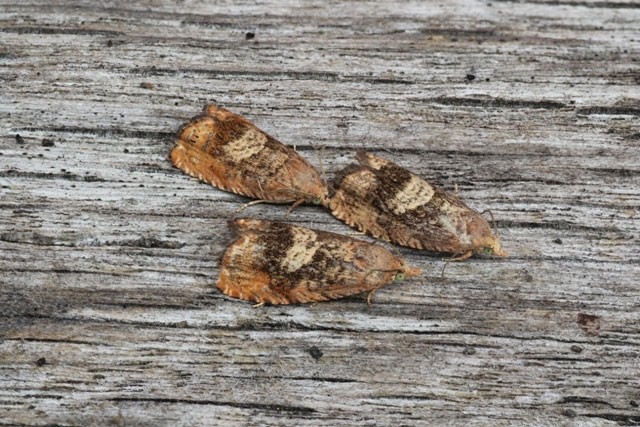 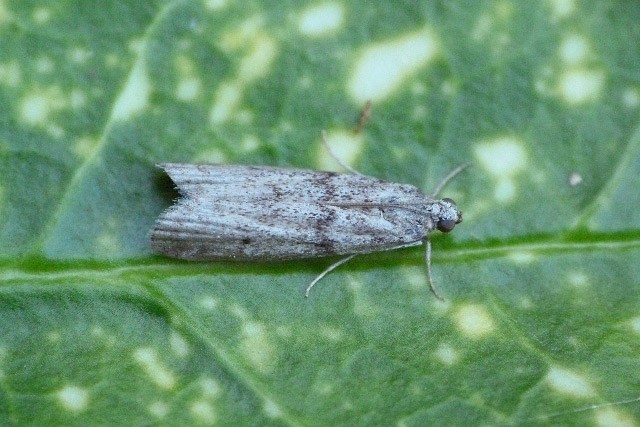 A very rare Diplopseustis perieresalis (1397a) was found in a Tiverton garden on 2nd September and is the 17th record for Britain. A native of Australasia, this one may have arrived from recently established colonies in Iberia or the Canary Islands. Duponchelia fovealis (1403a) is often found indoors as it is imported with potted house plants, so singles found outside at Southampton (Hants) and at Finaghy (Antrim) on 1st September is a big coincidence! 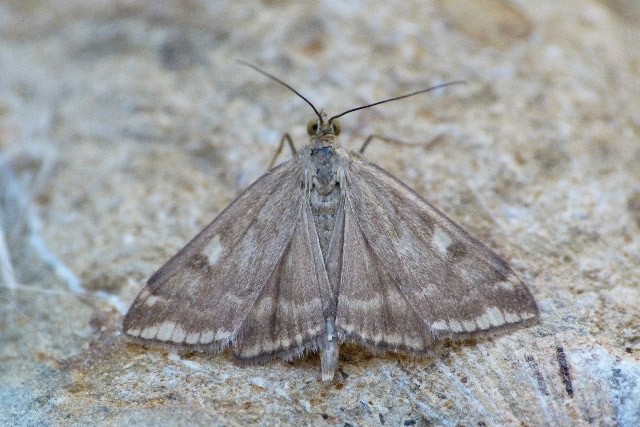 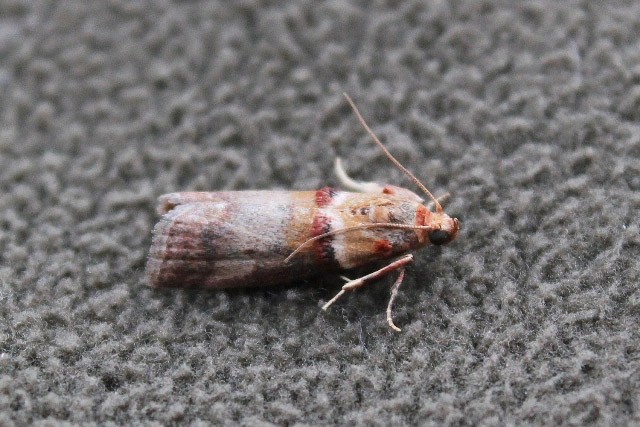 Four Tebenna micalis (386) found on the foodplant fleabane near Falmouth (Cormwall) in August may have been a tiny transitory colony, and one at Bawdsey (Suffolk) on 4th September was a county first. A Metalampra italica (642a) at Hertford (Herts) on 8th September was yet another new dot on the map for this still rare coloniser.

A very large late-summer influx of Red Admiral and Small Tortoiseshell butterflies was noted across the country, and to add spice to this were Camberwell Beauties at Sissinghurst (Kent) on 11th August, the Hayle Estuary (Cornwall) on 2nd September and later at Fareham (Hants) on 12th. Perhaps the most popular single butterfly of recent years was the very obliging Monarch that visited a buddleia in the ornamental park in Easton, Portland (Dorset) on 7th–15th. Others were at Ventnor Downs (IoW) on 3rd September and Flamborough Head (E Yorks) on 13th. These are not necessarily from the New World, as sizeable resident populations now thrive on the Atlantic Islands and in Iberia. 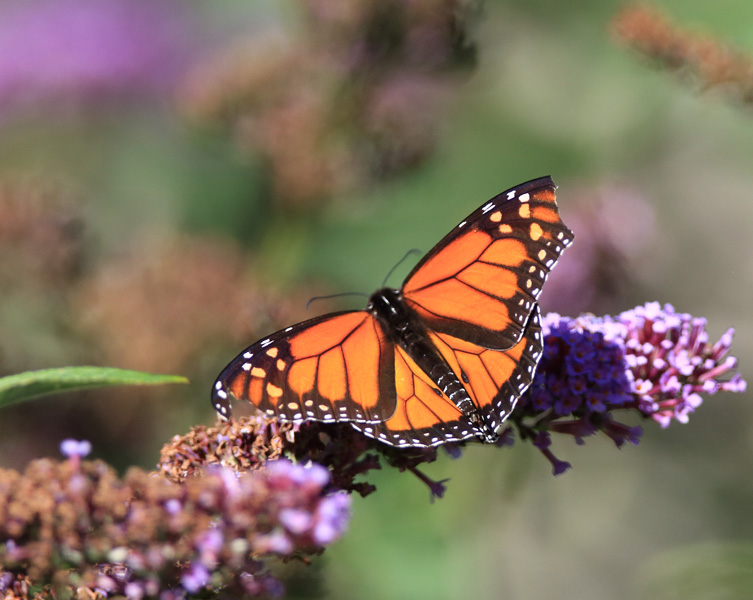 Painted Ladies were reported in small numbers, with the highest count being eight at Par Common (Cornwall) on 9th September. At least 14 Clouded Yellows were found near the south coast in Hampshire and Sussex.

Lesser Emperor dragonflies were recorded from eight counties including pairs in tandem at two sites. Red-veined Darters were found in at least eight counties including an amazing count of at least 50 at Severn Beach (Glos) on 23rd August. Southern Migrant Hawkers consolidated their numbers at known Essex sites, with further individual males reported at Blue House Farm EWT and Rainham Marshes (London) in early September. What appears to be a flourishing colony of Southern Emerald Damselflies was well observed at Winterton Dunes NNR (Norfolk) in early September, with at least seven individuals of both sexes noted. A lone Willow Emerald Damselfly was seen at Biggleswade (Bedfordshire) on 27th August — the westernmost point in Britain that this species has reached so far. 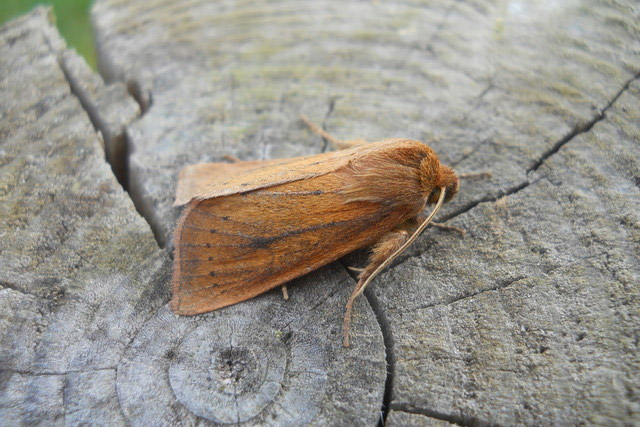 More species that seem to have had a great late summer season, including both geographical advances or being more abundant than usual, are Hoary Footman, Jersey Tiger, Square-spotted Clay and White-spotted Pinion. 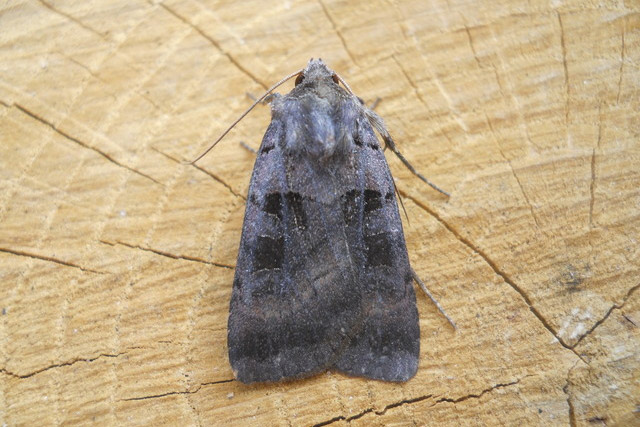 Two Square-spot Darts at Southwell, Portland (Dorset) on 8th September were surprisingly new additions to the island list, despite being resident on nearby Purbeck. With little sign since 2009 in Northumberland, Northern Deep-brown Darts were recorded at Backworth on 8th September and at Howick the following night — just like buses..! 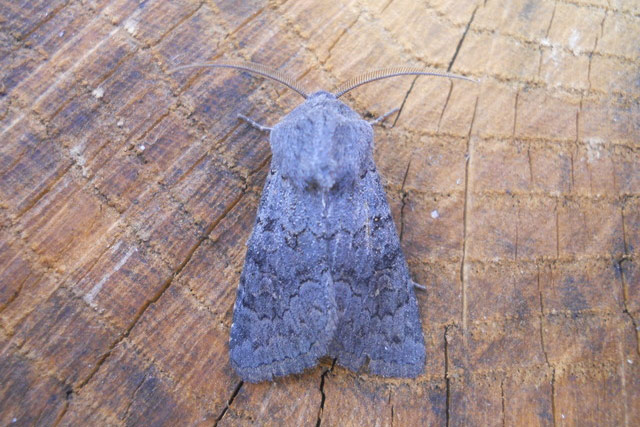 Sill in Northumberland, a Dotted Rustic was trapped near Tynemouth around 9th September. In Warwickshire a Marbled Green was a good find at Halford on 11th August, as were two late emerging female Marsh Pugs at Mancetter on 16th August. With little clearwing news this summer, it was nice to hear of nine Yellow-legged Clearwings coming to a lure in a Warwick garden on 18th August. By chance, a holidaymaker in Donegal appears to have stumbled across a new colony of the now very local Portland Moth, when three were found resting on his caravan window at Rossbeg near Sheskinmore on 25th August. An early Brindled Green was at Milton Keynes (Bucks) on 10th August but wider afield true autumn moths have so far either been slow to appear, in low numbers or even absent.

Perhaps the most significant 'micro news' of the period was the discovery of a Caloptilia hemidactylella (291) in a garden trap at Howick (Northumberland) on 31st August, now confirmed as the only the second record in the UK since 1954/55. It has only ever been recorded previously in four vice-counties in south-central England but, interestingly, one was recorded in its original wood in Gloucestershire in October 2009. Needless to say, it was a first for Northumberland, and indeed the north of the UK! Perhaps others lurk, as yet undiscovered... 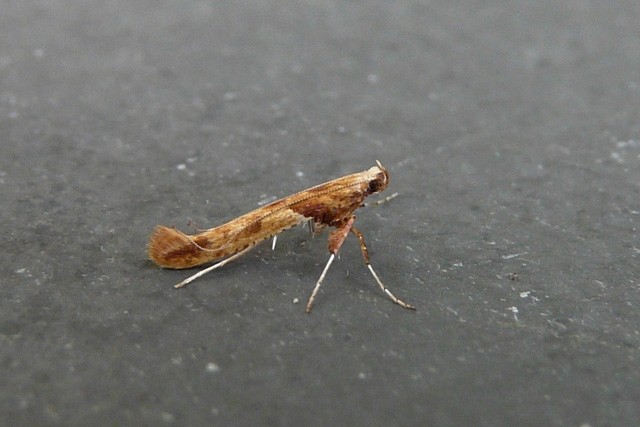 A Pammene aurita (1233) was also new to Northumberland at Newburn, Newcastle on 27th August. Small numbers of the Red Data Pediasia fascelinella (1322) were recorded along the Norfolk coast during August. Just inside the Berkshire border, a small population of Prochoreutis sehestediana (387) was confirmed from Windsor Great Park on 6th September. A Phyllonorycter strigulatella (344) was an interesting find at Framwellgate Moor (Durham) on 8th September, being new to the county.

The very wet summer has not been kind to many of our garden moths. Numbers have been quoted as 40–60% down on last year and it remains to be seen whether any long-term damage to populations has been done. Insects are quite resilient and some will bounce back for sure, but other delicate species or those with very synchronised lifestyles may struggle in the long term.