For the past two years I have attended BirdLife Malta's Raptor camp, an annual event populated by volunteers from Europe and beyond. The aim of the camp is to monitor bird migration in Malta during its peak period, and to report and to attempt to deter any illegal hunting. Illegal hunting and trapping of protected birds in Malta, as in other Mediterranean countries, is still a big problem and one that is hard to combat. As well as legal hunting-for-the-table of species such as Turtle Dove and Quail, there is an archaic practice of hunting for personal taxidermy collections; raptors and other large species are the top trophies. On top of this, there are those hunters who indiscriminately shoot at anything that flies, and those who trap finches and waders to keep in personal collections of live birds.

Spurred on by recent events witnessed by volunteers and BirdLife staff at this year's springwatch camp, and a recent post by bird blogger/podcaster Charlie Moores, I decided to write a little on my experience in Malta. Hopefully this will raise awareness of the situation there and promote the cause further.

My first visit to Malta was in September 2009. I had booked up quite blindly to attend the raptor camp, hoping for a good experience whilst at the same time contributing to a positive project, and also improving my raptor identification skills on the way; the trip managed to fulfil all of these aims. However, I was left with a much stronger feeling — one of outrage and helplessness, having witnessed first-hand the shocking behaviour of some of the hunting fraternity in the country and having heard stories of past crimes and ongoing problems.

Whilst breathtaking views of up to 200 Honey Buzzards and Marsh Harriers circling above my head along with countless sightings of Black Kites, Hoopoes, Eleonora's Falcons and many other species were unforgettable, two events stuck with me more than any others. A visit to Malta's natural history museum in the impressive former capital city of Mdina gave us the opportunity to view the 'freezers of death': a depressing series of chest freezers stuffed to the brim with dead birds, many of them protected species, that have been confiscated or found dead and dying around the Maltese countryside. The museum also contains row upon row of archive cabinets filled with mounted skins, confiscated from private taxidermy collections; this section included all sizes of bird, from small passerines to a White Pelican with everything in between.

On top of the problem of poaching within Malta itself, it was disturbing to hear about the myriad packages seized at airports and postal depots in Malta that contained fresh skins of protected birds from all over the world, presumably destined for private taxidermy collections. Incidents have included the confiscation of White-throated Kingfisher skins and a Maltese poacher caught in Egypt with carcasses of protected species.

On the last day of my time in Malta, a frantic gathering of volunteers saw us being led to Mizieb, the second-largest area of mature woodland in Malta and an area managed by the FKNK, Malta's main hunting organisation. Details emerged that CABS, another organisation that runs bird conservation camps in Malta, had observed an Osprey being shot; they entered the woodland to search for its body. On entering the woodland, they found a number of carcasses and skeletons hidden under rocks, in crevices and under rubbish. It was decided that volunteers from BirdLife Malta should join forces with CABS in an attempt to search the woodland. The two groups, following a search of only one-third of the woodland, found over 200 birds, including 35 Night Herons, three unidentified herons, 38 Marsh Harriers, 33 falcons, 18 Honey Buzzards, three Kestrels, 49 skeletons of unidentified raptors, one Nightingale, one Golden Oriole, three Hoopoes and four Nightjars.

My second visit to the raptor camp left me with equally poignant memories. A second search in the Mizieb area, in an effort to highlight the lack of action taken by authorities, was undertaken. This search ended abruptly after a violent confrontation, culminating in an assault on one of the CABS staff members by a man who turned out to be a council member for the FKNK. The offender was subsequently found guilty of 'insulting and attempting to assault'; ironic for an organisation that claims its members are law-abiding and pleasant people.

Hoopoe, shot and crushed under a rock in Mizieb (Gavin Bennett).

Remains of a Marsh Harrier, again found under a rock, Mizieb (Gavin Bennett).

The event that had the biggest impact on me personally was the arrival of a flock of 24 Spoonbills on the island. Having been spotted earlier in the day by myself and the then conservation officer for BirdLife Malta, they were observed by various teams across the island and finally chose to rest in front of the hotel in which we were staying, opposite a bird sanctuary. Having been in court during the morning, I had missed the afternoon observation sessions and found myself flying solo on the roof of the hotel with my binoculars and a video camera. It wasn't long before a traffic jam appeared on the road adjacent to the field where the birds were, and I feared the worst as I videoed the flock and spoke to other teams on the phone. The ALE, the wildlife crimes unit of the Maltese police, were called and promptly arrived to guard the birds. As the light faded the birds were disturbed from their roost; a team of volunteers attempted in vain to follow them as they flew around the island. News of their arrival had obviously spread amongst the hunting community and, come morning, only 14 birds remained with three having visible gunshot wounds. 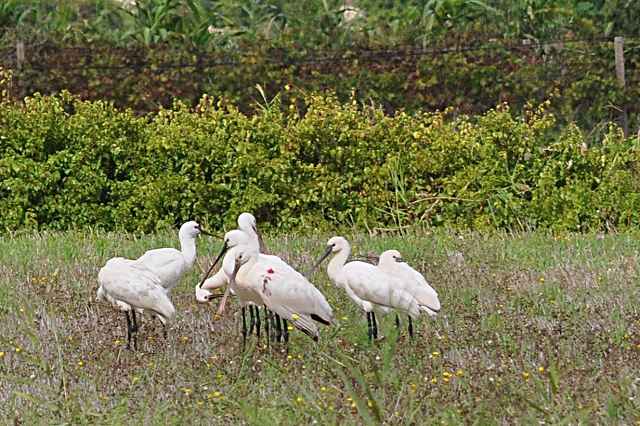 The following day, both teams and the police continued to observe the birds, which had returned to the area near the hotel. Nine birds left the island later in the day, with five birds, including the visibly injured birds, staying behind. These remaining five were relentlessly pestered by people who threw rocks and set fires nearby in an attempt to move the birds on from where they were settled. More shots were heard that night in the area were the Spoonbills had last been seen; the fate of the birds is uncertain. It was heart-breaking to see the injured birds that day. Malta is the only place I have visited where I hoped I would not see such amazing birds, wishing that they had chosen a different migration route.

During the spring migration camp, BirdLife reported flocks of Marsh Harriers hunted by lamplight as they roosted, a Montagu's Harrier observed shot, later retrieved by police, and injured birds brought into the BirdLife office by members of the public; these included a Cuckoo, a Black Kite and a Purple Heron. The most emotive story, however, came with the arrival of 200 White Storks on the island in mid-March. The island was reportedly alive with gunfire as the birds sought to find a safe roost site. Six storks were witnessed being shot down, whilst a handful of dead or dying individuals were also recovered, some directly from the hunters themselves.

Illegal hunting and trapping in Malta is difficult to solve. Under-resourced in attempting to monitor thousands of hunters, the small teams of ALE officers are in need of more resources if they are effectively to tackle the problem of illegal hunting. The ALE is aided by BirdLife, along with its volunteers, and by members of the public who report illegal activity, but even this, it seems, is an ineffective deterrent. It is the government itself that needs to be held to account; it has continued to oppose the guidance given in the European Union's Birds Directive and has already been fined for breaching EU law by allowing spring hunting of Quail and Turtle Dove in 2004–2007.

If my experiences have left you feeling the need to contribute to the work of BirdLife Malta, there are a number of things you can do. The easiest is to become a member of BirdLife Malta and pump some much-needed funding into their efforts. Additionally, you could enquire about their spring and autumn conservation camps and get involved, as I did, acting as a visible protest against the law-breakers. Staying closer to home, writing a letter to your local MP or MEP requesting that pressure be put on Malta at an international level to clean up its act is a good starting point.