Over the past four years, the International Birding & Research Center in Eilat (IBRCE) has conducted unique seabird monitoring at the deep waters of the Red Sea. We arrive monthly at the marine border of Egypt, Jordan and Israel, where the sea is more than 700m deep, spill some sterilised chum and stay for three hours, hoping for some shy sea birds which aren't typically found around our shores. Sometimes. we return having seen no birds at all – seasick, but nevertheless, always happy. Zero birds is good data too ...

The marine seabird survey has uncovered some exciting new discoveries. The Wilson's Storm Petrel, seen only once before our surveys began (Shirihai et al 1996), is actually a regular summer visitor to Eilat waters from June to September (being most common in September), arriving from the Antarctic islands to spend their southern winter in heat as sweltering as 45ºC in the shade (and there is no shade). Alongside them are enigmatic Swinhoe's Storm Petrels, seen in our summers from June to September (in the past, some weak individuals were collected here in the winter too).

Their status is unclear: according to literature (Harrison 1983; Onley and Scofield 2013), they breed in islands off Japan and the Russian Far East, wintering in the Indian Ocean and in small numbers in the Red Sea. Evidently, it is not quite so rare – it is a regular summer visitor seen every year off Eilat, with up to three individuals noted on each visit. 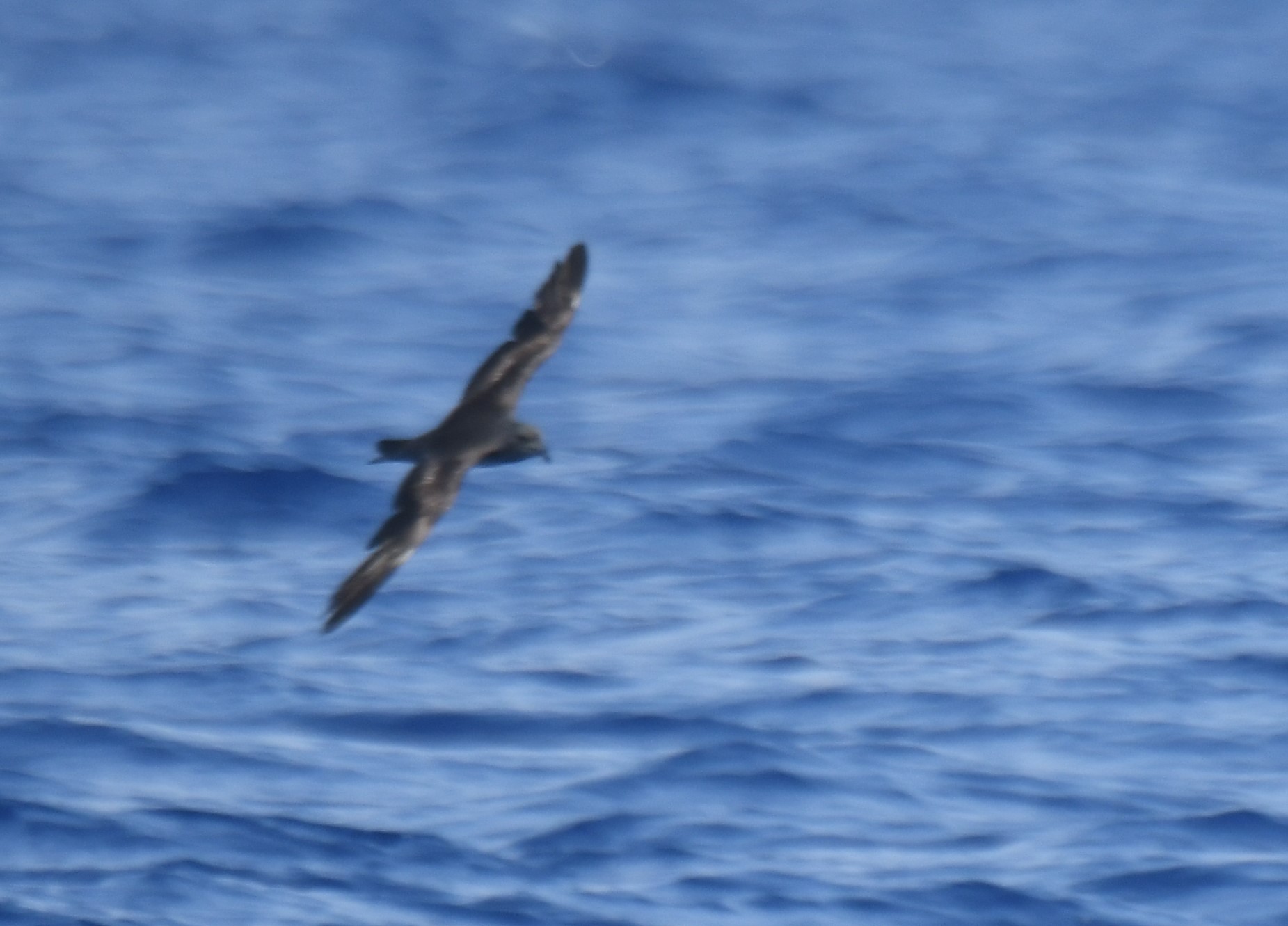 The light upperwing patch meets the front edge of the wing near the carpal joint, while the tail is long and deeply forked (Noam Weiss).

During the last four years, I started to get to know the storm petrels pretty well. I know where and how to find them, what to expect. The stunning white-and-black Wilson's I have seen five times at least and Swinhoe's around 15 times or so. Last October [2020] we sat on the tiny boat of the Nature and Parks Authority: Chen Tofikian, the manager of the coral reserve, Eran Gisis, who works for the reserve, Iris Gorin, an IBRCE volunteer, and myself. Seeing a dark storm petrel did not surprise us, but its behaviour did.

Usually, the Swinhoe's keep a good distance from us, fly in purposeful straight lines, with frequent and strong wing beats, pretty high above the water, stopping only briefly over the chum in a "butterfly kind of flight". But this one was different, lazily fluttering above the water's surface with a slower wing beat, moving from side to side, changing directions and speeds. It looked heavy but we did not manage to get decent photos and it didn't stay long enough. We gave up on it.

On 22 August 2021, two dark storm petrels appeared around our boat. One was the usual light and slender Swinhoe's, but the other one resembled the one from last October. It approached the boat at least six times for long periods, sometimes really close. You could see it in its eyes, it was not a Swinhoe's. It was something else. 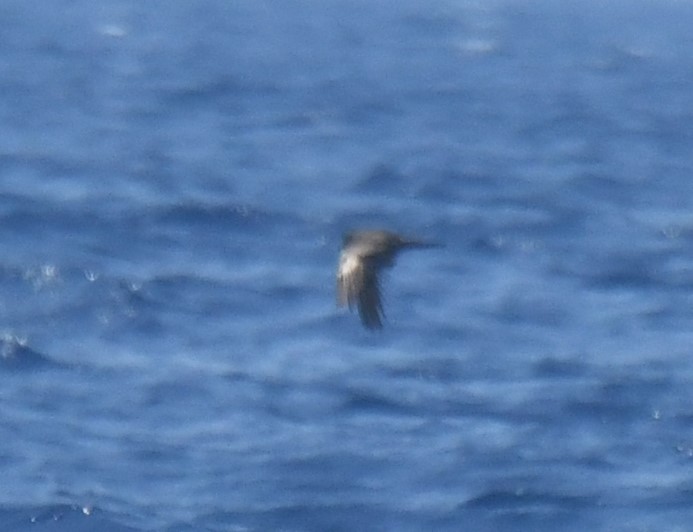 After consulting some experienced birders, books (Harrison 1983; Onley and Scofield 2013) and an article that Hadoram Shirihai wrote about his experience with the species in Seychelles (Shirihai 2016). I believe it was a Matsudaira's Storm Petrel. These are the field marks I saw in the field and are reflected in the not so clear photos I got:

According to Onley et al (2013), Matsudaira's starts to moult during July and August, while Swinhoe's begins a partial moult in April and completes in November. This partial moult limit was evident in the primaries of Swinhoe's we saw off Eilat during August. The Matsudaira's showed a different pattern, where most primaries were of the same generation and some inner primaries had been replaced. 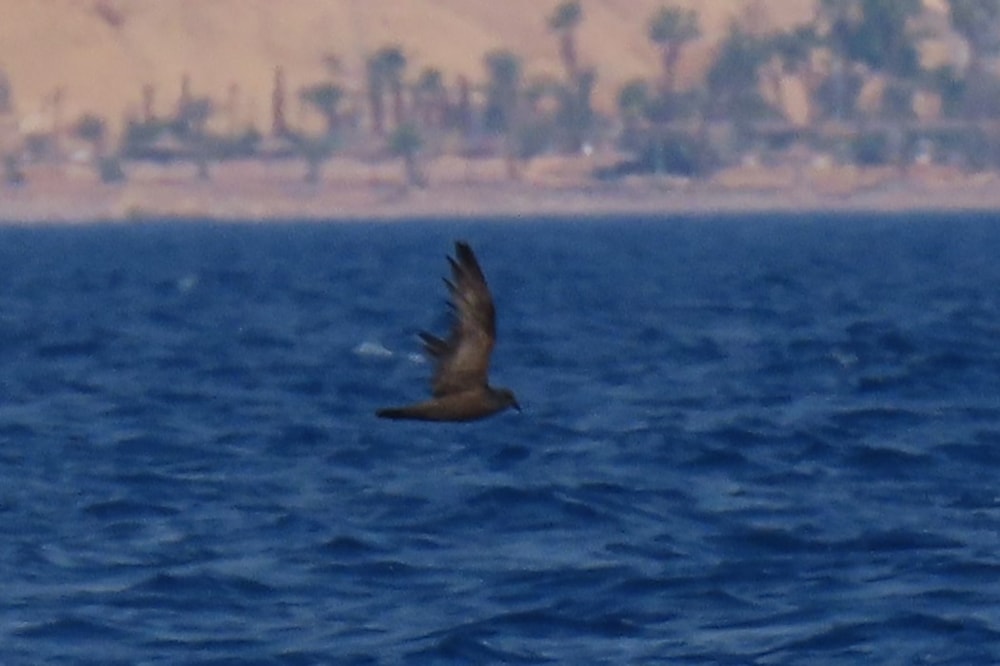 On 17 September, along with eight birders equipped with better cameras, we went to try and document it again. After several hours, we saw just three Swinhoe's – small slender "butterflying" above the water and flying away in straight lines, keeping their distance from us. The observation just made me even more confident identifying August's bird as a Matsudaira's.

Hadoram Shirihai, who probably knows this species better than anyone thanks to multiple visits to Seychelles and other locations, is convinced about the identification. Hadoram and some other international experts had already suspected October's bird was probably a Matsudaira's too, but some disagreed. This time, we have not managed to seek comments from some experts, but it looks to me like the real thing. When you get to see it, after so many observations of Swinhoe's, one can see the differences. It's a different animal. 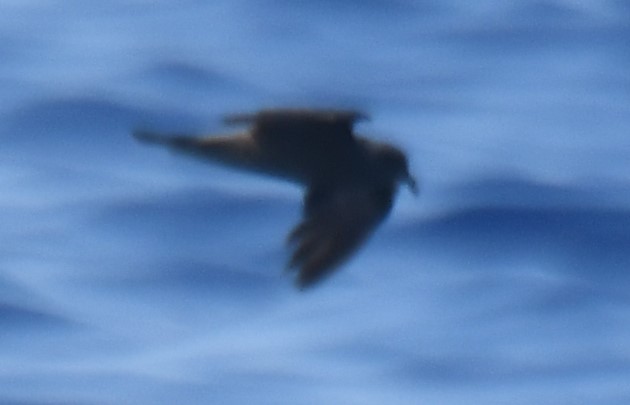 Matsudaira's shows a long and slender bill, at odds with the stubby and shorter bill of Swinhoe's (Noam Weiss).

See you in Eilat!