Fifteen-year-old George Dunbar, from Cheshire, was named the Martin Garner Spurn Young Birder of the Year at the 2016 Spurn Migration Festival, ahead of four other young finalists and 30 young birders who entered this year's competition.

The British Trust for Ornithology (BTO) and Spurn Bird Observatory opened the contest to young birders from across the UK in the form of a preliminary round, which took place earlier in the summer. This comprised an online questionnaire covering the entrants' birding experience, confidence in identifying closely related species, local patch work, record keeping and commitment to the world of birding. Those eligible had to be 16 years old or less on the day of the final.

Some 30 entries were received from across the UK, and the BTO and Spurn joint assessment team had the difficult task of choosing five finalists. Those selected were contacted and given a short interview by Skype, as much to reassure them and their parents that they would receive great support, and that the event on 'final day' would be fun as well as providing a great opportunity for learning and meeting like-minded young birders. BTO's Nick Moran said: "It was amazing to see the talent out there among young birders, and just talking to them prior to the final made us realise what it meant to them — they were all real stars."

The morning of Saturday 10 September saw the finalists and their parents assembled at Spurn for a briefing from chief judge Nick Whitehouse, a member of the Spurn Bird Observatory committee. Next it was straight out into the field, each contestant accompanied by an assessor, rotating around various stages. These included a seawatch, an estuary watch, looking for migrant birds in the bushes and a lab test (the visible migration stage was left out at the last minute due to persistent rain on the day). During each stage the finalists had to identify three species selected by the assessor, as well as answering several supplementary questions.

Examples of the latter included:

The conditions were very wet and challenging. Nick Whitehouse said: "All the finalists did really well, showcasing some amazing young birding talent, with the winner 15-year-old George Dunbar from Warrington, just nudging it from the others. Congratulations to George, a worthy winner."

Young Birder of the Year George Dunbar commented: "When I received an e-mail to tell me I was one of five young birders to reach the final, I couldn't believe it. I was elated and couldn't get downstairs to tell my parents quick enough! When Nick Whitehouse announced the winner at Spurn, it was very close, but it turned out to be me! I was stunned. Never in a million years did I think I'd win a competition like this one." 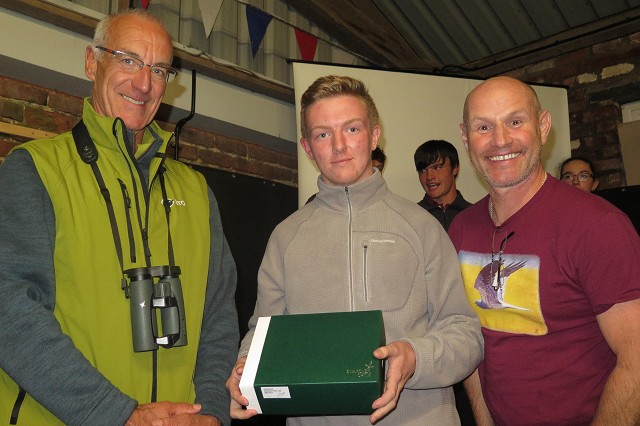 "All the finalists can feel justly proud of their achievements, and we hope they will keep returning to Spurn where we want young birders to enjoy some great birding and fun and friendship in a welcoming and supportive environment here at the observatory," said Rob Adams, adding "a big thank you to the contestants, and all who helped make the contest such a success."

The observatory decided to honour their former committee member, MigFest co-founder and internationally renowned ornithologist, the late Martin Garner, by naming the contest the 'Martin Garner Award for Spurn Young Birder of the Year'. The main trophy remains proudly displayed in the observatory. At the Saturday evening lecture session, the finalists were all invited up onto the stage where they received rapturous applause from the large audience, who clearly appreciated their courage in taking part and their birding skills. The presentations were made by BTO Chief Andy Clements and Spurn Bird Observatory Chairman Rob Adams, with the winner receiving a brand new pair of binoculars kindly donated by Swarovski Optik. All finalists received other prizes including new birding books, inscribed shields and a year's membership of the Friends of Spurn and the BTO.

George was involved in the discovery of a White-crowned Sparrow in Cheshire earlier this year; read his account here.