Since the winter of 2002-03, Dr Richard Broughton of the Centre for Ecology and Hydrology (CEH), part of the Natural Environment Research Council, has studied dozens of Marsh Tits in various woods in rural Cambridgeshire. His aim is to learn more about the ecology of this woodland specialist and to try to shed light on why the British population plunged by 72 per cent between 1967 and 2009.

The results of his ongoing research are fascinating and thought provoking, and could trigger a rewrite of woodland management policy.

Broughton's study population comprises 50-60 pairs of Marsh Tits in 16 woods covering 4,500 ha of arable land near Huntingdon, Cambridgeshire. The main focus of his attention, however, is some 30 pairs of birds in four woods, in particular the 20 or so pairs living in Monks Wood NNR. His aim has been to find out "how Marsh Tit ecology works and how this might relate to their serious population decline". 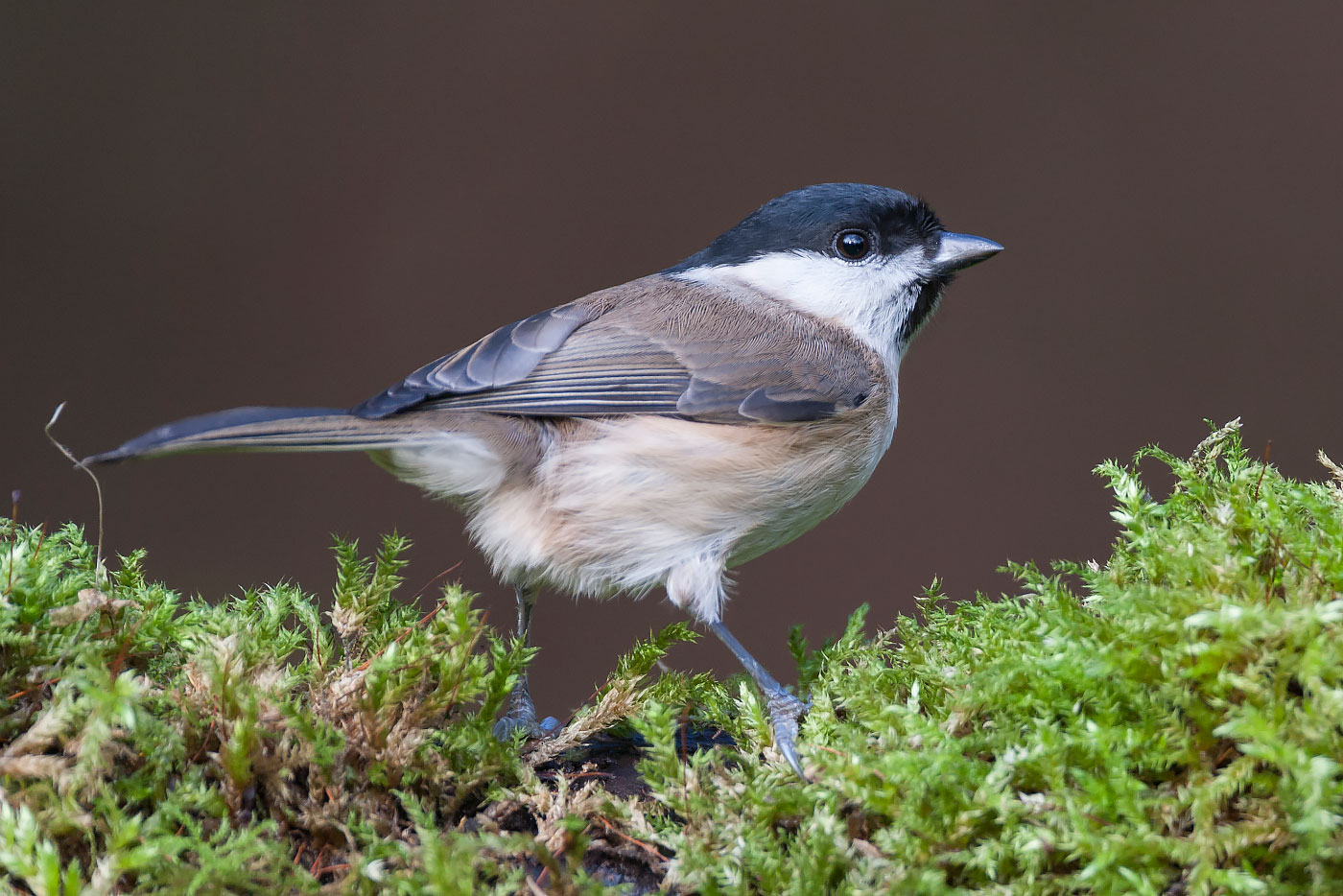 In this Marsh Tit, the diagnostic white spot at the base of the upper mandible can be seen clearly, though the two-tone cheek pattern is less discernible (Oliver Smart / www.smartimages.co.uk).

Broughton has used a combination of low-tech and high-tech tools to reveal some of the species' secrets. He has employed binocular observations, trapping birds in home-made wire cages – so they can be measured, weighed, sexed and colour ringed – and erecting special nestboxes, as well as radio tracking certain individuals, playing MP3 recordings of the birds' songs and calls and using LiDAR (light detection and ranging) remote sensing – lasers mounted on a plane – to determine the height and density of trees and shrubs in the study woods and even the species living within them. 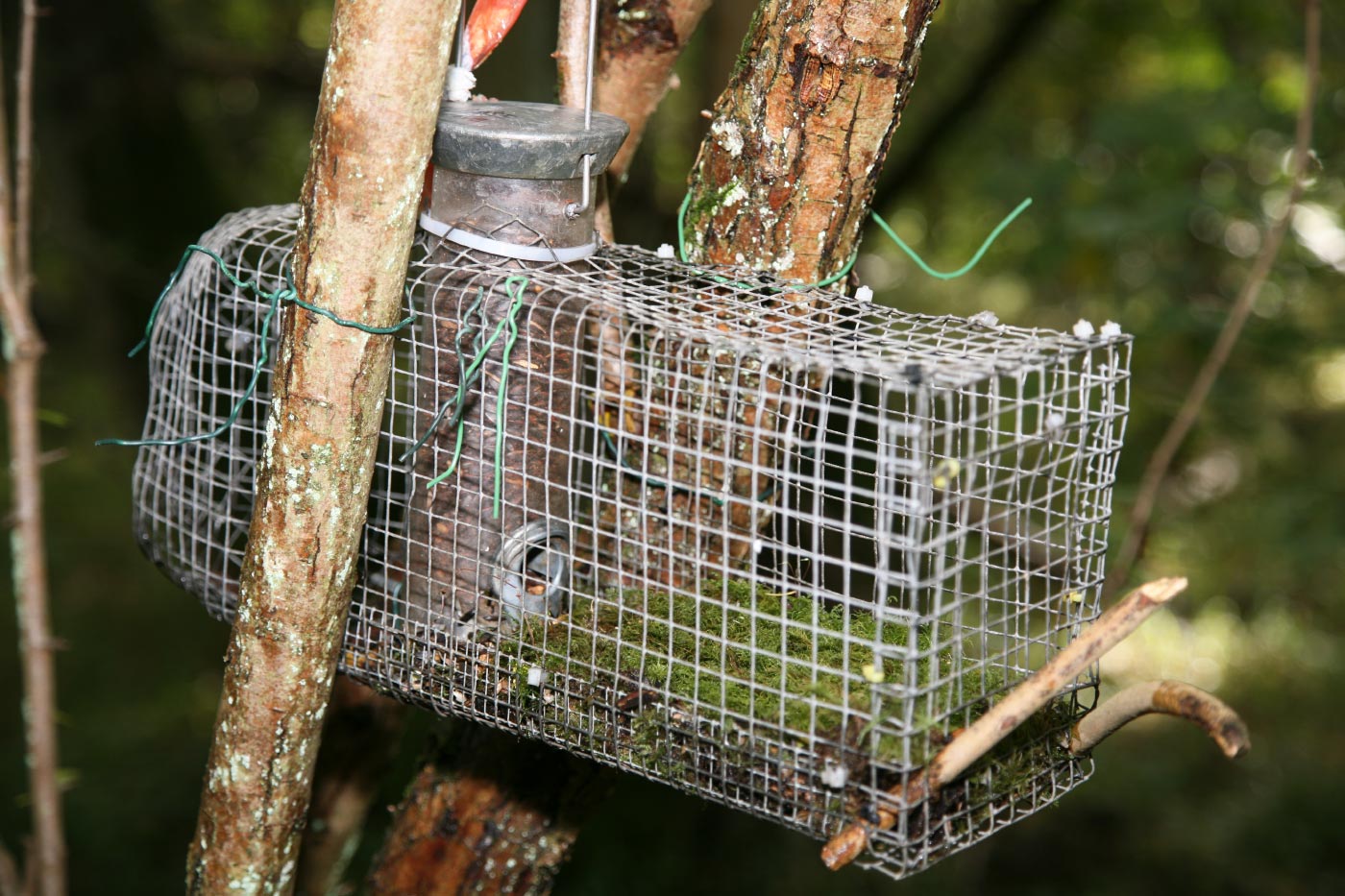 This trap in Monks Wood, Cambridgeshire, was specifically designed and made by Dr Broughton to safely capture the local Marsh Tits, and incorporates both cage and feeder to ensure the bird remains healthy until the cage is checked (Ron Toft).

"As far as I am aware, this is the biggest and most detailed study ever of Marsh Tits and their habitat," says Broughton, who is based in Wallingford, Oxfordshire.

As we crouched behind a tree in Monks Wood, waiting for a dominant male Marsh Tit to enter one of the wire cages, Broughton told me that although it had long been known that Marsh Tits occupy large territories, until the CEH study no one had appreciated just how large these territories really are.

"The average territory size is four to six hectares. That's massive for such a small [10-12 g] bird. In fact, some Monks Wood pairs have much bigger territories, up to 20 ha.

"When the Marsh Tit population is low, some males annexe other territories and defend those too. Very occasionally – I've recorded it four times so far – you get a male which will run two territories with a different female in each.

"Nobody knows why Marsh Tits need such large territories. That is one of the conundrums. Certainly it's fundamental to their life cycle." 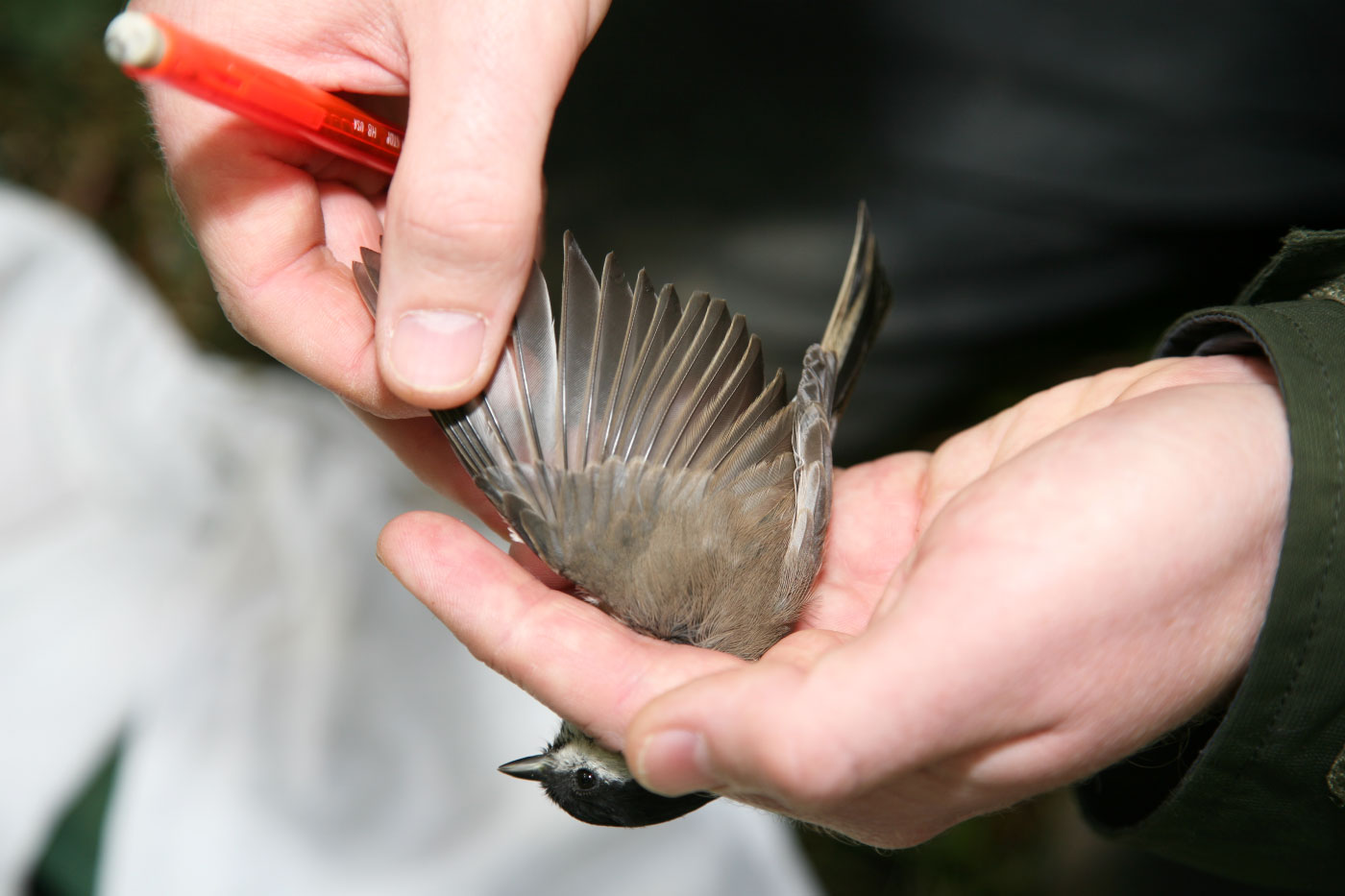 The wing formulae and feather condition of each captured bird is examined in the hand, and this can indicate the bird's state of health, as well as demonstrate its age and stage of moult (Ron Toft).

Broughton thinks it might have something to do with food storage. "Marsh Tits have a phenomenal spatial memory. They cache their food – berries, seeds, insects and spiders – under bark and moss in widely separated areas rather than in clusters. Perhaps it's easier for them to remember individual trees as cache markers."

Marsh Tits won't settle permanently in a wood covering an area of less than 4.5 ha. "Most woods in Britain are not very good for Marsh Tits simply because they are too small." 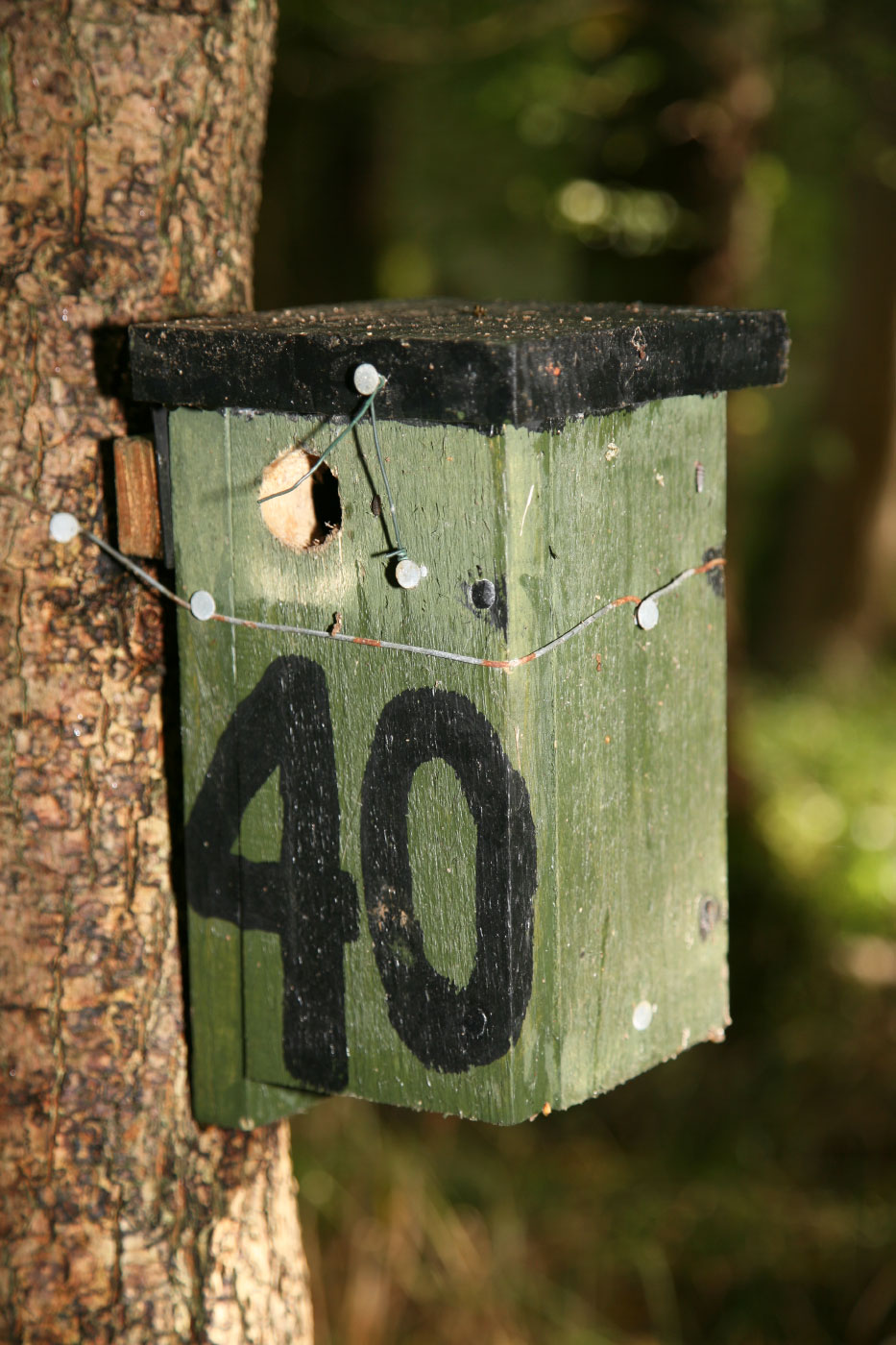 Marsh and Willow Tits are harder to provide with artificial nest sites than the commoner species. Nestboxes like this one in Monks Wood often have to be partly sealed with sawdust to encourage the birds to excavate the hole themselves (Ron Toft).

By overlaying territory and vegetation maps in the study area, Broughton has discovered that Marsh Tits prefer mature, mixed deciduous woodland in which trees are at least 15 m high, the canopy is at least 80 per cent closed and there is a substantial understory covering at least 40 per cent of the woodland floor. Marsh Tits have "a clear preference" for an understory one to four metres high, and dislike woodland edges and "actively avoid" coppiced areas.

"Managing woods by thinning out trees or removing some or all of the understory would render them totally unsuitable for Marsh Tits. This is something that should be borne in mind when planning future woodland management and conservation strategies in core Marsh Tit areas," says Broughton.

Another finding is that Marsh Tits "are in a race against time, and each other," when it comes to breeding. The imperative for each pair is to raise as many young as early and as quickly as possible so their offspring can disperse and establish territories.

"Even a brood that fledges the day after another won't be as successful because there will be fewer territories available. The bird that occupies a vacant territory first invariably holds on to it."

If a nest is destroyed or predated, "the pair usually won't breed again because they know their chicks won't survive". 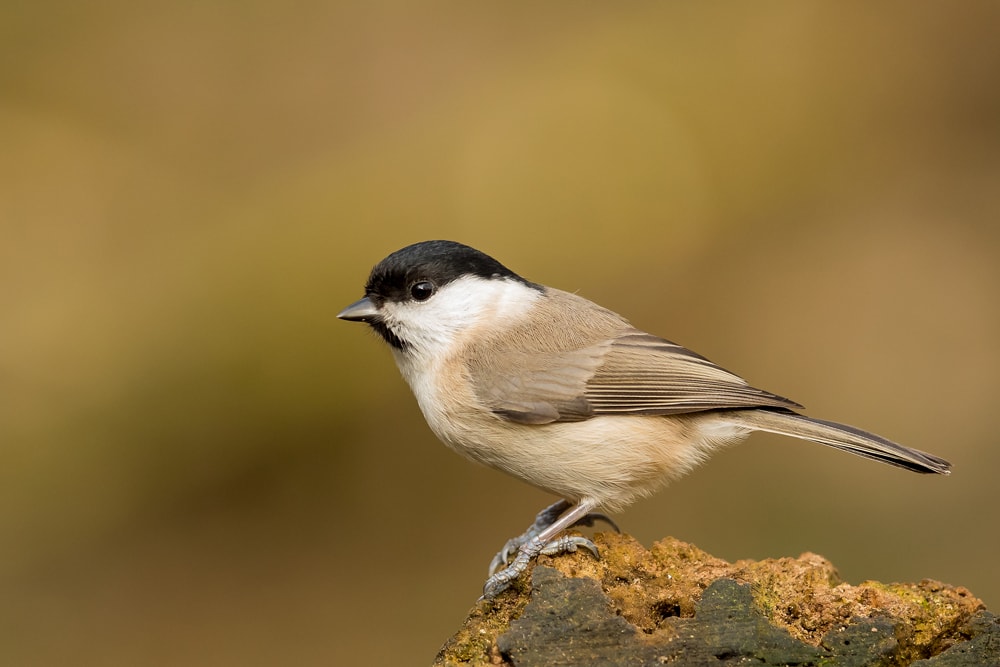 Marsh Tits are cautious breeders. If a nest is predated or destroyed, a pair doesn't usually attempt to breed again that season (Garth Peacock).

Dispersal distances, says Broughton, "are very short and very critical. Birds don't move very often from Monks Wood to the next nearest wood, even though it is only 800 m away. What's more, there have been only two recorded movements between Monks Wood and a wood about 1.25 miles away and only one recorded movement to a wood three miles distant.

"For some reason, Marsh Tits don't like moving between woods, especially if there is open space separating those woods. Only 9 per cent of all ringed birds have moved between woods."

Another discovery is that Marsh Tits are loathe to fly more than 200 m across open ground. "There is always going to be some inter-wood movement providing there are connecting hedgerows. Cut down just one important hedgerow or flail it badly, and that could adversely disrupt local Marsh Tit movements."

The reason Marsh Tits are so averse to moving far from their birthplace, he belives, could simply be that "they prefer to stay in an area they know and that meets their needs. A greater than normal fear of predation might also be a factor".

But there is a bigger question to answer. "Although we don't yet know what has caused the Marsh Tit decline, what is clear from our study, and an allied one conducted by Jane Carpenter, is that we can rule out various possible causes," said Broughton (see Causes of decline ruled out, below).

"We've ticked off all the frontrunners. The decline could simply be a turning of the screw – increased mortality through starvation or predation (there are fewer Marsh Tits available to replace those lost), a combination of both, or something else.

"When we began our research, essentially we were trying to find out how many Marsh Tits there were in the study area and what habitat they preferred. But as the years passed, and LiDAR data became available and our ideas developed, we were able to shed light on many aspects of Marsh Tits' lives.

"The research has progressed way beyond my expectations and probably become the most detailed woodland bird habitat study anywhere in the world. We've discovered or confirmed many things, but there is still much more to find out about Marsh Tits." 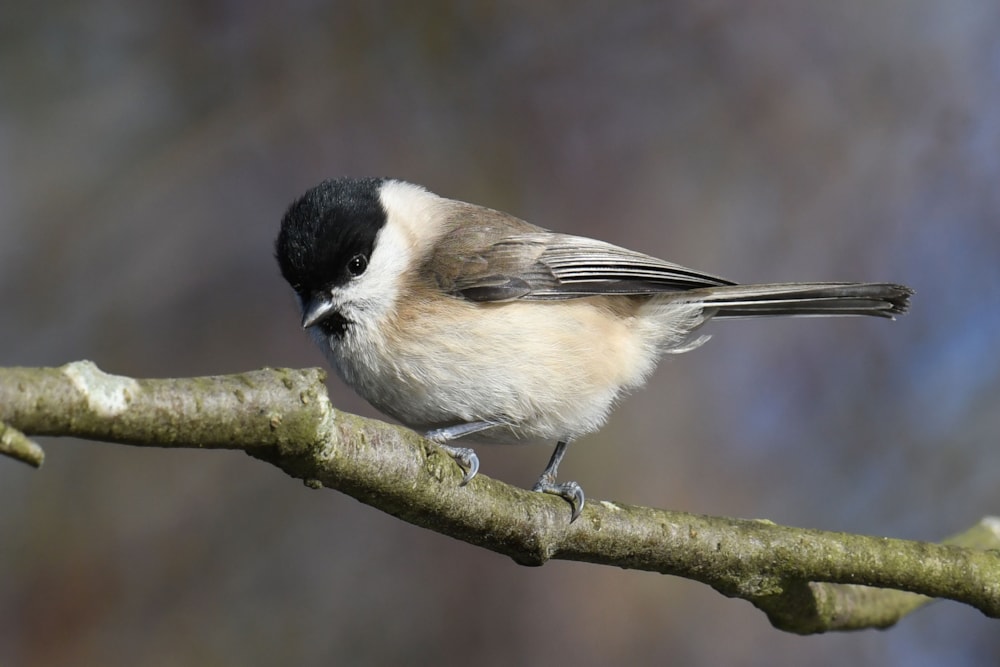 Dr Richard Broughton normally expects the Monks Wood population of Marsh Tits to be boosted by 40 to 50 juveniles annually. In 2012, however, only 17 youngsters were caught and colour ringed.

"The very wet spring ruined breeding attempts," he explained. "This is potentially serious, because juveniles are the 'spares' that are needed to fill the vacancies created in the various territories during the winter."

Broughton expected the number of occupied territories in 2013 to be the lowest ever recorded. "It will be interesting to see how long it takes the Monks Wood population to recover from a random severe blow like this. In smaller, remote woods it could take many years, if at all."

Causes of decline ruled out

Separating Marsh and Willow Tits in the field

Separating the British subspecies of Marsh Tit Poecile palustris dresseri and Willow Tit P montana kleinschmidti in the field is considered by many birders to be especially tricky.

Dr Broughton, who has probably studied Marsh Tits more intensively than anyone else during the past 10 years and compared the finer points of their plumage with those of Willow Tits, and also the skins of both at the Natural History Museum in Tring, says: "There are various features which, if seen well, should enable birders to distinguish one species from the other."

"It's easier to separate the two species in the hand, when the whitish bill marks are more readily seen. Furthermore, Marsh Tit has a different pattern of tail feather lengths – useful for ringers – to Willow Tit." 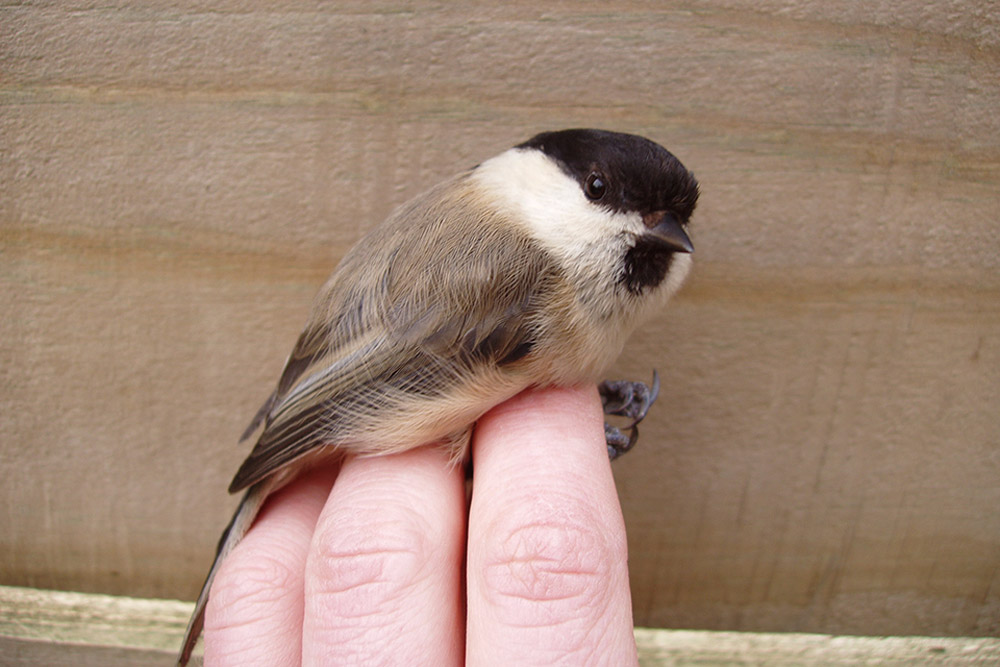 In the hand, it is easy to see the lack of white at the base of the upper mandible of this adult male Willow Tit, but the fairly concolorous wide white cheek patch and strong suggestion of a pale wing panel are also evident. The alleged 'bull-necked' appearance of the species is less reliable for identification, and can be merely the result of posture (Dr Richard K Broughton). 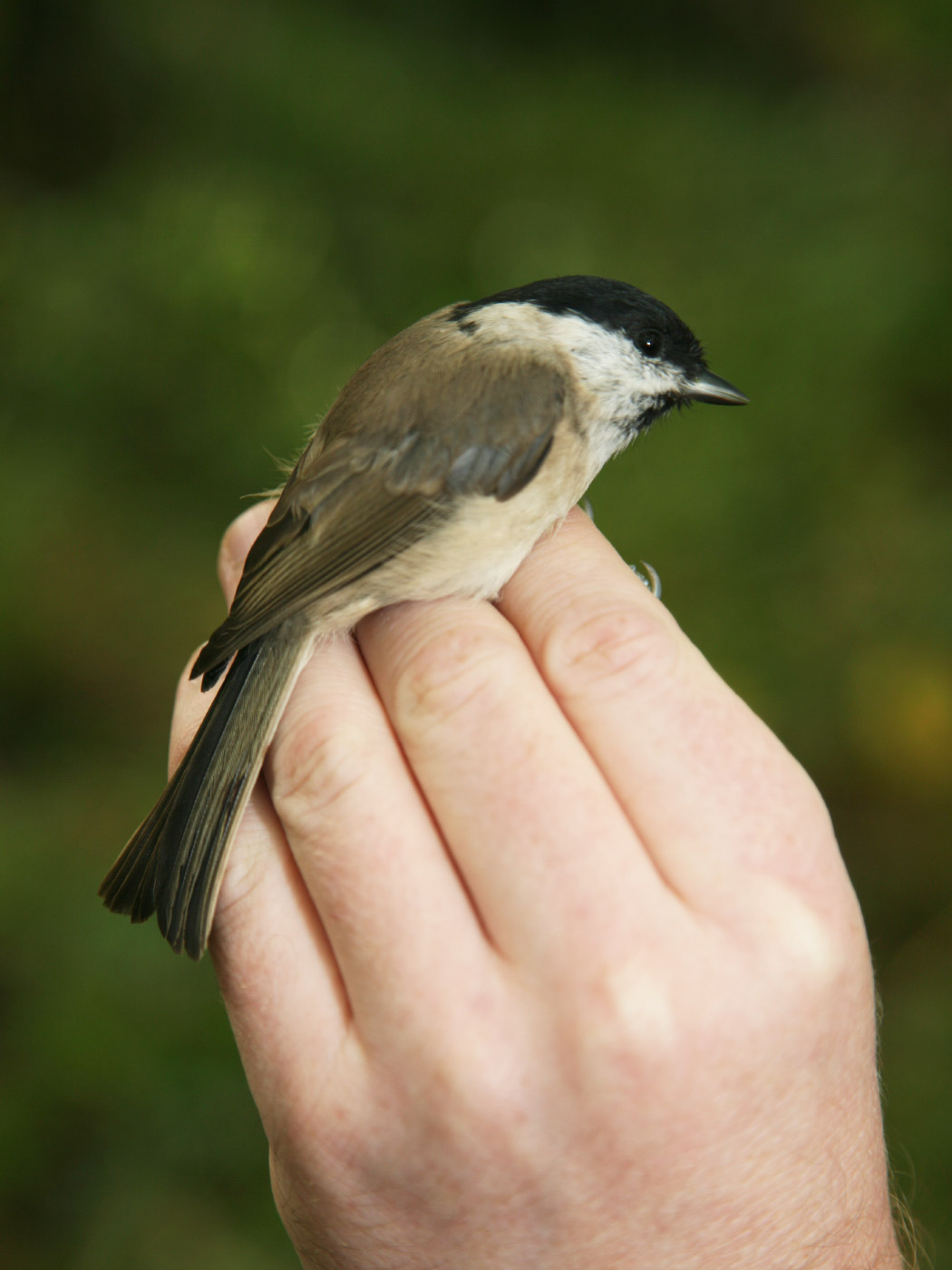 The wings of this first-year male Marsh Tit are much more monochrome than the vast majority of Willow Tits, but fresh-plumaged Marsh Tits can sometimes show a pale wing panel. The pale spot at the base of the upper mandible and the two-tone cheeks with a clear dividing line are obvious here (Ron Toft).