Lucy McRobert: free for all?

In January, I was touched to be invited to join the online Birder's Pub Quiz as a guest host. Mark Golley, Ashley Saunders and Nick Acheson once again did a fantastic job of presenting a fun and fiendishly difficult quiz, which brought together birders from all over the UK and beyond, including a team from Arizona. They even did a fundraiser for Fair Isle Bird Observatory. This was our birding community at its best and I loved every minute.

Taking part made me realise how much I miss bumping into familiar people. To the rest of the world, birders can seem introverted and anti-social, and there are those who like to keep to themselves. But it's also full of friendships, rivalry and camaraderie. Over the past year, as we've been pulled apart, the online world has brought us virtually back together.

Pre-2020, most county bird clubs ran talks once a month for members. Speakers ranged from witty and professional techno-geniuses sharing film clips, hilarious stories, interesting research and pyrotechnic displays through to Tim-down-the-road with his low-resolution holiday snaps of fuzzy birds and a sleep-inducing drawl. There would be a village hall, uncomfortable plastic chairs, dodgy projectors, extension cables to trip over and tea served in green cups with custard creams. A little twee, but charming and very much part of our birding heritage.

Now the more Zoom-conscious have moved their talks online. Putting aside the endless quips of ‘you're-on-mute, Geoff!' and failing internet connections, these have their benefits. Anyone can attend from anywhere in the world, including speakers. Why stop at the UK when we can beam international lecturers in live? The chairs are comfy, the house warm and there's no travel, so a far smaller carbon footprint. You can attend in your underwear and drink gin. 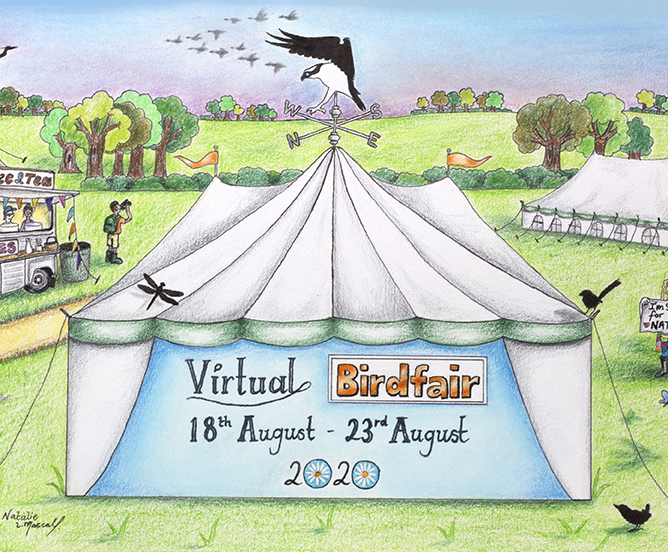 Last year’s Virtual Birdfair was a great way of ensuring the event went ahead in the face of a global pandemic.

But they can't replicate the buzz of the room, which for many people, especially the elderly, is necessary to stave off loneliness. There is also an unwillingness to pay to listen, despite the work that goes into administration and preparation. This has knock-on impacts on the many people who rely on giving talks for an income. If we are to keep at least some of our events online, this must change.

Naturally, we come to Birdfair. A huge part of its charm is that you can meet people from all over the world, bringing together a close-knit global community; but the carbon footprint of the event is enormous, not to mention the emphasis on overseas travel. A natural evolution for Birdfair in 2020 was to go digital – a win-win in the fight against climate change and allowing it to happen in a pandemic. However, while the events were well attended, I doubt anywhere near as much money was raised for BirdLife's Helmeted Hornbill project. The draw for fundraising lies in ticket sales, of being with the tribe, meeting old friends and new faces, and treading familiar paths.

As I write, the question remains whether Birdfair can safely return in 2021; if it does, it will undoubtedly look and feel very different. Selfishly, this makes me very sad. A smaller event might suffice with stands predominantly from the UK, although I worry about the impact this will have on independent tour guides and companies, some of which are already disappearing. Events and lectures can run both virtually and face to face, but we mustn't expect this content for free.

Birdfair's legacy is its impact on global conservation projects, with more than £5 million raised so far. If this is to continue, and I hope it does, we are all going to have to chip in. It's going to take a lot of courage, creativity and commitment, and a sprinkling of our community camaraderie, too!