Two of Loch Garten's Osprey chicks can be tracked south on their autumn migration thanks to the wonders of modern technology. Both of these birds (named Nethy and Deshar after two local primary schools) have been fitted with state-of-the-art satellite transmitters, allowing their every move to be tracked. 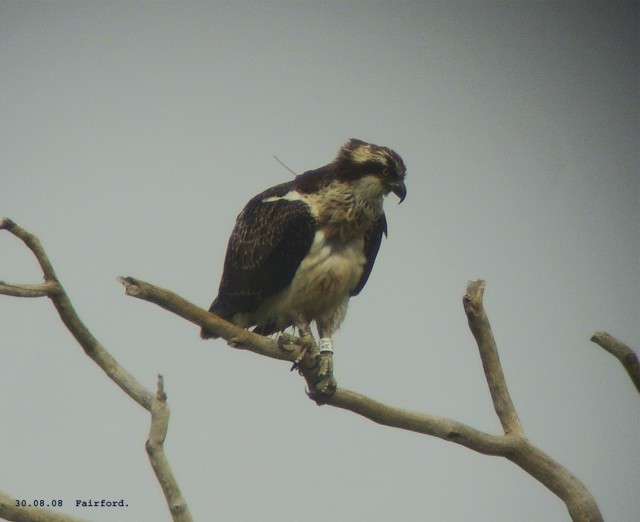 Both birds left Loch Garten in mid-August, and have now crossed south over Scotland and most of England. Deshar is currently in the Hythe area of Kent, and Nethy was recently photographed at Fairford, Gloucestershire. The journey hasn't all been easy though, as Deshar had originally set out over the North Sea, before reorientating and heading back to land. He also overshot the Essex coast, heading out into Thames estuary before turning back west into Kent. Hopefully their journey will be much simpler from here on in!

Both of these birds are also carrying a unique numbered metal ring (Nethy is 1410613 and Deshar is 1410614) and a coloured plastic ring. The latter has a code on it so the birds can be identified individually from a distance, allowing long-term monitoring to continue beyond the life of the transmitters. 'White AY' is Nethy and 'White AZ' is Deshar, but also keep an eye out for their parents, 'White EJ' and 'Orange VS', neither of which have been seen since leaving Loch Garten on 14th/15th August.

This pair first bred (unsuccessfully) in 2002, with the male being dumped by the female, who subsequently moved to Loch Garten. The same male then tried to repair with 'White EJ' over the next five years, but always lost out to another bird (ring 'HV'). When 'HV' didn't return in 2008, 'Orange VS' saw his chance and re-paired, raising Nethy and Deshar.

You can keep track of the progress of Deshar and Nethy at www.rspb.org.uk/ospreytracking.

If you find a ring, or see a colour-ringed bird, you can report it online at www.ring.ac.