October is the probably the most exciting time of the year to be a birder, being well known as the month for megas. Every outing is filled with hope of finding something notable, and I find myself with bucketloads of motivation to get out locally through the month. Patchwatching covers the vast majority of birding I do, so competing in #LocalBigYear made little difference to my normal routine. I'm in an incredibly fortunate position to have a fantastic array of habitats within walking and cycling distance of my house, allowing all of my patch birding to be green.

The initial lockdown during spring 2020 was the first time I started to focus a lot of effort into local birding. It wasn't long until I fell in love with it, as it quickly became my favourite aspect of the hobby. Not only is it exhilarating to see rare and scarce birds close to home, but also the perfect way to appreciate commoner species that you wouldn't normally take a second look at.

I live in the small village of Burton Joyce in Nottinghamshire, situated on the River Trent floodplain. I tend to spend most of my time at my local gravel pits, Netherfield Lagoons, just 2.5 km away from home, though my radius for the #LocalBigYear is extended slightly beyond to include some Trentside fields and scrub, totalling a 5 km area. 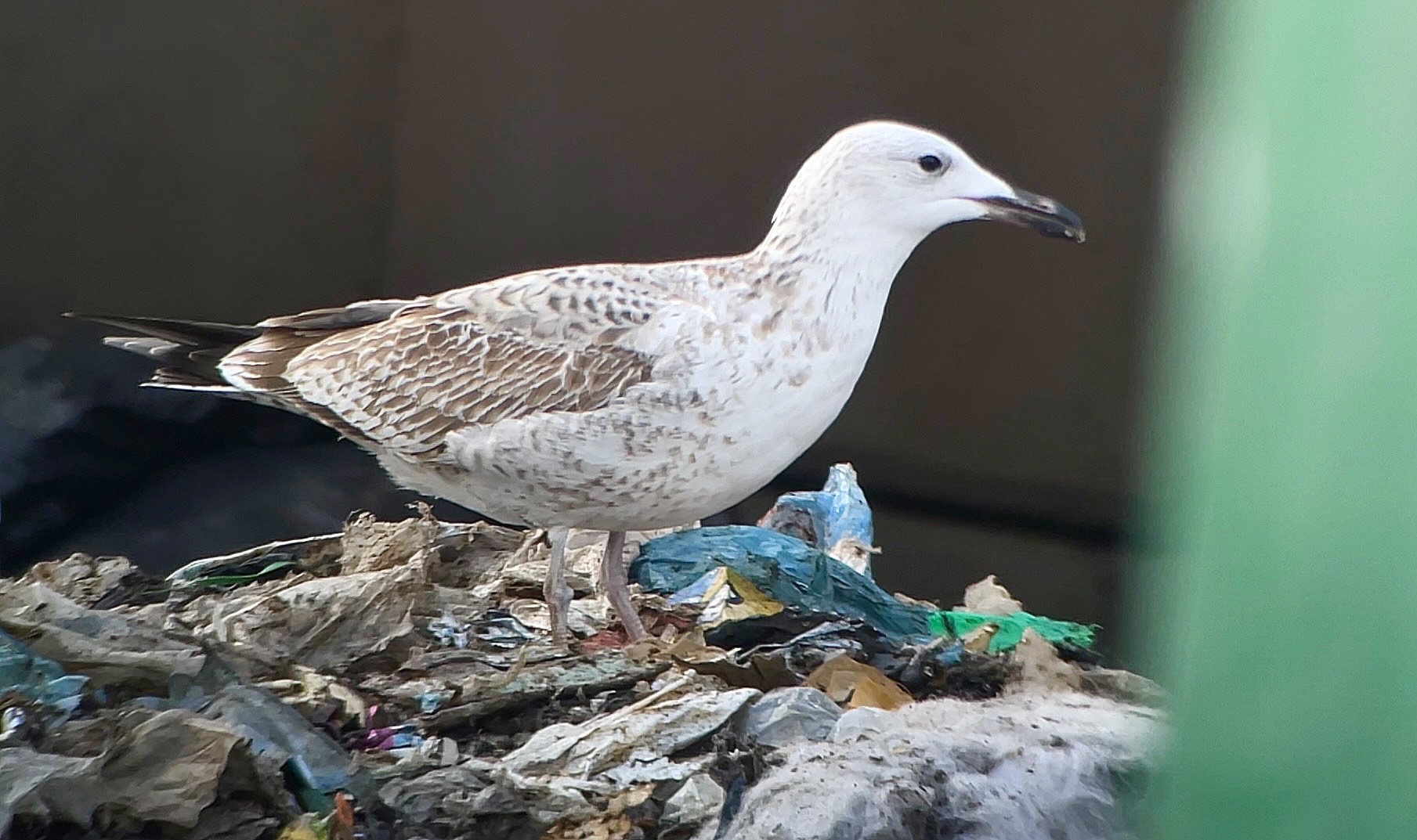 The lagoons offer some fantastic birding all through the year, with a couple of reasonably sized pits of ranging depths, lying on raised ground. Maybe not as enticing as a patch on the coast, but being positioned alongside the River Trent has huge perks, with a variety of species using the Trent Valley as a migration pathway. Typically this is more productive in the spring months, with terns, waders and passerines heading back to breeding grounds, but it can also be rewarding during October.

This has produced my best local year so far in terms of quality species, the standout being a brief Caspian Tern in July, so I had high hopes going into the month, having more time to explore locally than I have done the for past three years due to university. This is the first year where I’ve not been in education and had to rely on a half-term holiday or 'Reading Week' for some autumn birding (when I should have otherwise been revising for exams!).

October began at a terribly slow pace, with few autumn migrants arriving due to poor wind direction and weather conditions. A juvenile Garganey provided some distraction at the start of the month, and a nice addition to the local year list, but I could pull little else out of the bag.

Like many others, I'd been hoping for a nice easterly airflow, but two weeks into October there hadn't been a sniff. Admittedly, I can be guilty of checking wind and weather conditions too frequently. If conditions appear unpromising, then perhaps I'd take some time off from patchbirding and get on with some other things. I'm sure this has cost me many local birds over the past few years, but it can be a challenge to stay motivated when few birds are on the move.

The 13th was one of these days where there was little else in the county, and the weather was very fine. A glorious day to be outside, but the hopes of finding something worthwhile seemed slim. Despite this, I continued with my near-daily routine of cycling down to the lagoons when immediately upon arrival, a Glossy Ibis flew low over my head. 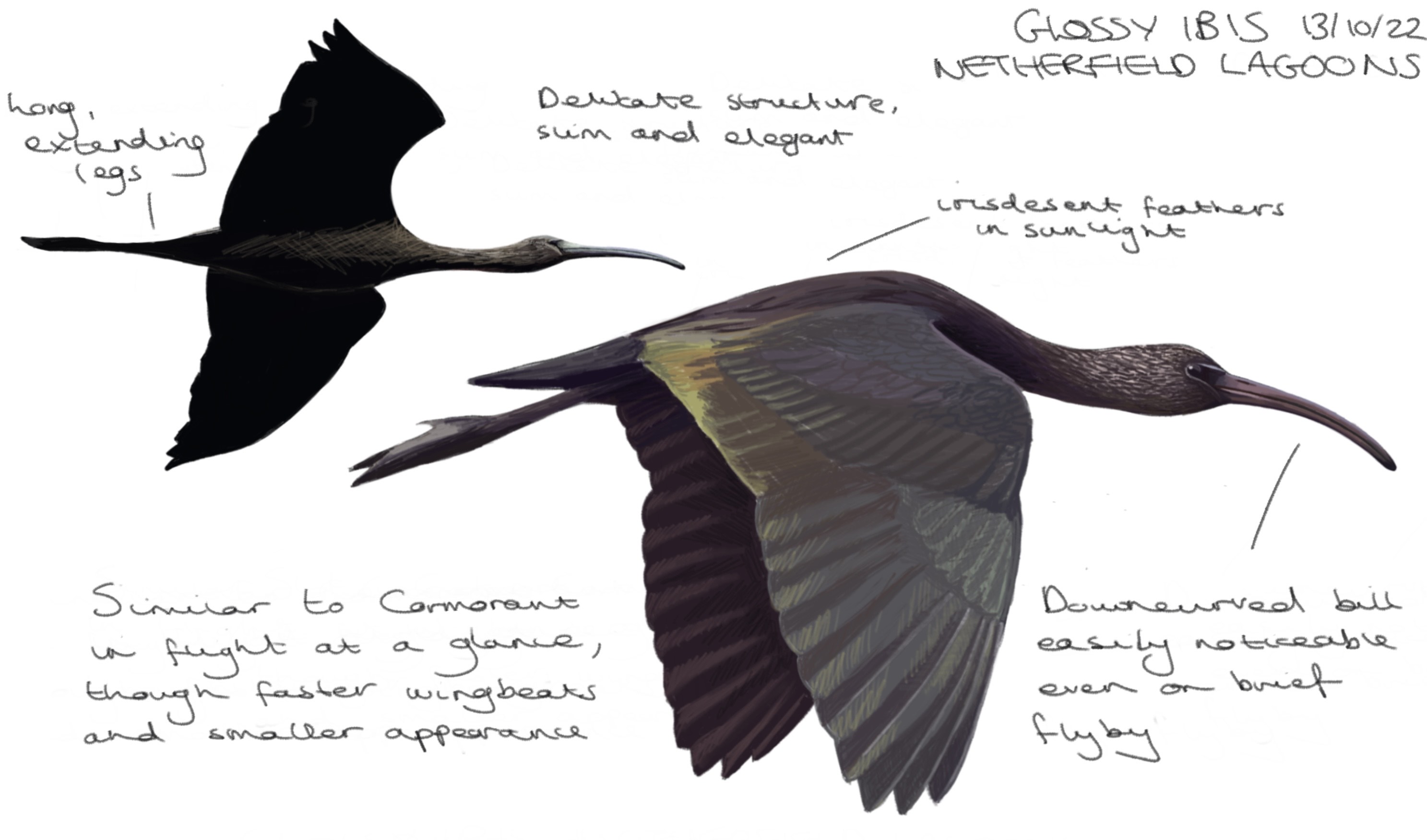 A brief Glossy Ibis was a welcome record on 13 October (Miles Cluff).

The bird took one look at the pits and decided it wasn't worth its time, so continued on its way. Slightly frustrating, but arguably it made the experience more memorable, and a reminder that birding is unpredictable. While Glossy Ibis is a year-round resident in southern England nowadays, it still made my week, and was just the kind of motivation I needed to keep plugging away.

These types of encounters are the holy grail of patchbirding in my opinion; brief flyovers or drop-ins that only last for a minute or two. A case of 'right place, right time', where if you’d taken moments longer to make your coffee in the morning, you'd have missed it! It always leaves you wondering what species have slipped by unnoticed.

The evening of 18th brought in a couple of calling Bearded Tits into the main reedbed at the lagoons, a scarce but not totally unexpected bird here in the autumn and winter months. Having only heard this species here before, I was keen to get some better views the next day. To my surprise, I had cripplingly close views of a male and female happily 'pinging' away barely a couple of metres in front of me. 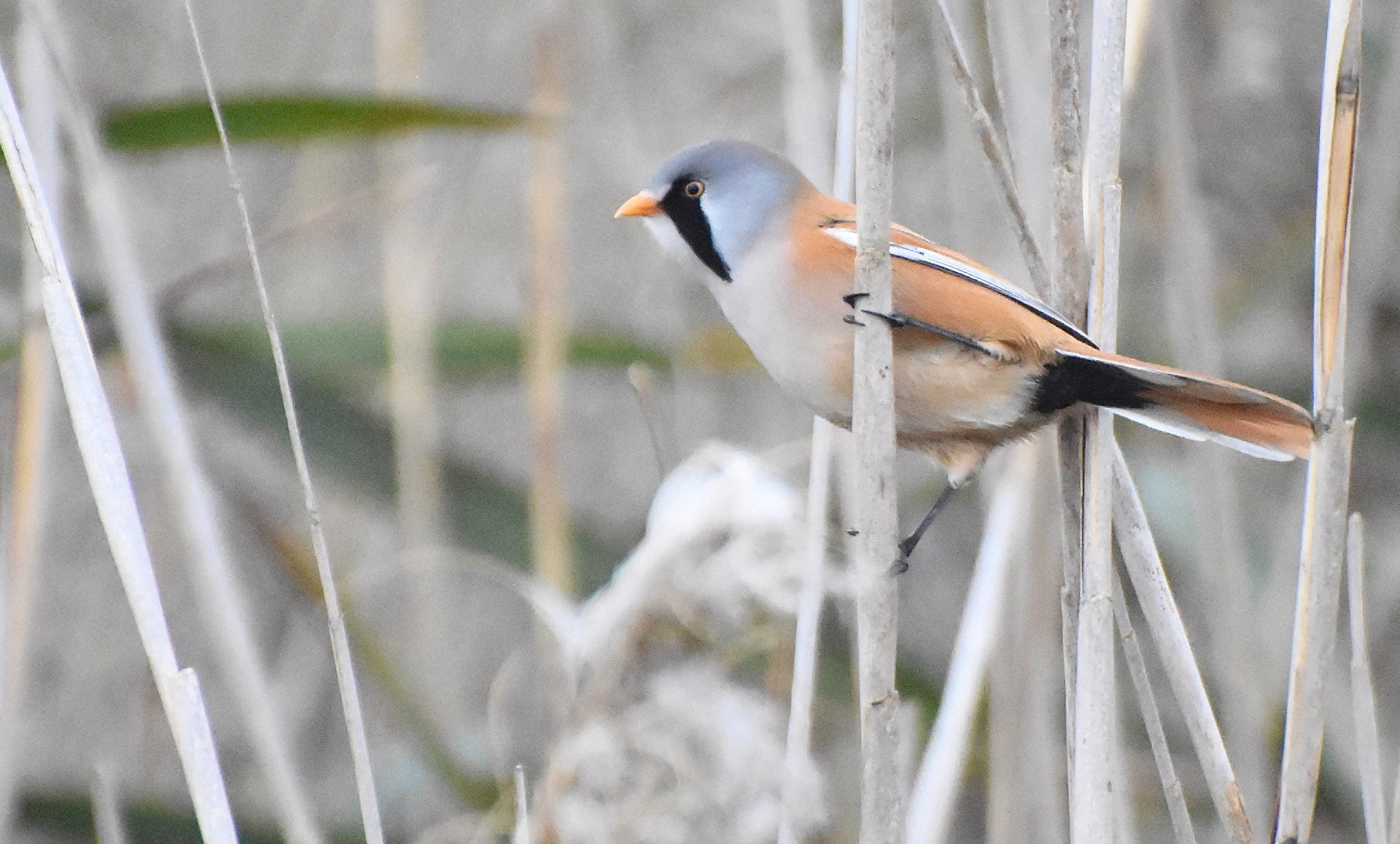 This male Bearded Tit was part of a flock that spent time at Netherfield Lagoons (Miles Cluff).

A real highlight of the month, though it didn't stop there. The flock grew over the following week until it peaked at around 13 birds on the 25th. This coincided with a nationwide arrival and dispersal of Bearded Tits, with them turning up in all sorts of random locations.

On the 19th the winds switched, and the easterlies I'd been hoping for all month were finally upon us. It didn't take long until wintering thrushes started to pile into the UK, and the sky was alive with them when I stepped out the door that morning. I logged a conservative count of 5,000 Redwings and 800 Fieldfares, comfortably my biggest local tally. A juvenile Western Marsh Harrier and first-winter Mediterranean Gull in the afternoon made for an exciting day of patching, both being irregular visitors to the area.

The 26th seemed like a good opportunity to check if any Jack Snipe were back in their favoured areas for the winter, and rather unsurprisingly, one was hunkered down in the wet grass by my foot while I was chopping back some vegetation to clear an area for them. A species I always appreciate seeing close to home, although they never get easier to find. 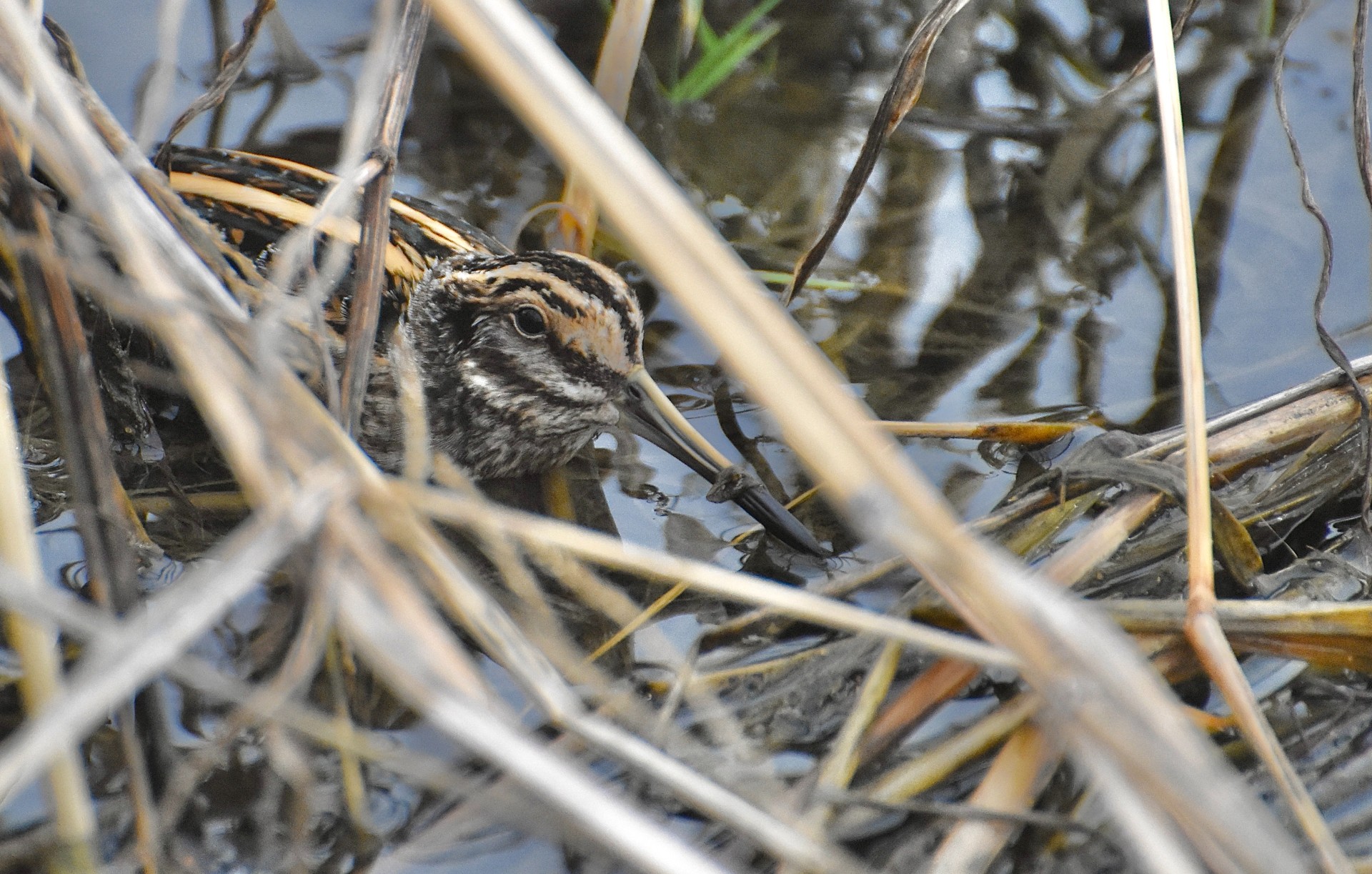 With the end of the month approaching, I started to focus a lot more time into the gulls again at my local rubbish tip, Enva Recycling Centre. Gulling has given me some of the most enjoyment within birding in recent times, being notoriously challenging, yet just as satisfying and rewarding. The last few days of October brought a significant arrival of large gulls to area.

Among this influx was a noticeable increase of beastly argentatus European Herring Gulls around the recycling centre, clearly showing that gulls were coming from further afield in hopes of an easy meal. It felt inevitable that a Caspian Gull would show up at some point in the week, and right on cue, two – an adult and first-winter – were picking through the rubbish on the 30th, affording some excellent views.

The recycling centre provides a unique opportunity in Nottinghamshire to see these birds at close range, rather than watching them on a distant gravel pit (as long as you can deal with the smell!). The last decade or so has brought an almost complete closure of landfill sites in Nottinghamshire, so this, coupled with the ever-expanding range of Caspian Gull in Western Europe, has made Enva Recycling Centre the best place in the county to see this species. Good numbers of Yellow-legged Gulls were still hanging on around the tip on the same day, with between five and 10 of all ages present.

October was over in a flash, but was still a super month to be out birding locally despite the fact it didn't produce the autumn 'biggy' I'd been dreaming of. The month ended on a respectful tally of 139 for the year, my best green local year yet, and with still a couple of months to spare. Here's to the rest of 2022.