It's great to see how popular the #LocalBigYear challenge has been during the first three months of 2022. Local and patch birding has always given me the most enjoyment and sense of satisfaction within the hobby – it's virtually all the birding I do. As a result, a local big year for me in 2022 was always going to be 'just another' 12 months of hitting my patches, so I opted for something a bit different: a 1 km challenge.

Not too long after the year began, I moved house. It's not far from where I was before in south-west Surrey – but far enough for the immediate area to be new to me. I mapped out a rough 1 km radius from my front door and was encouraged by what was within the area, which led to the idea of going for a 1 km list. 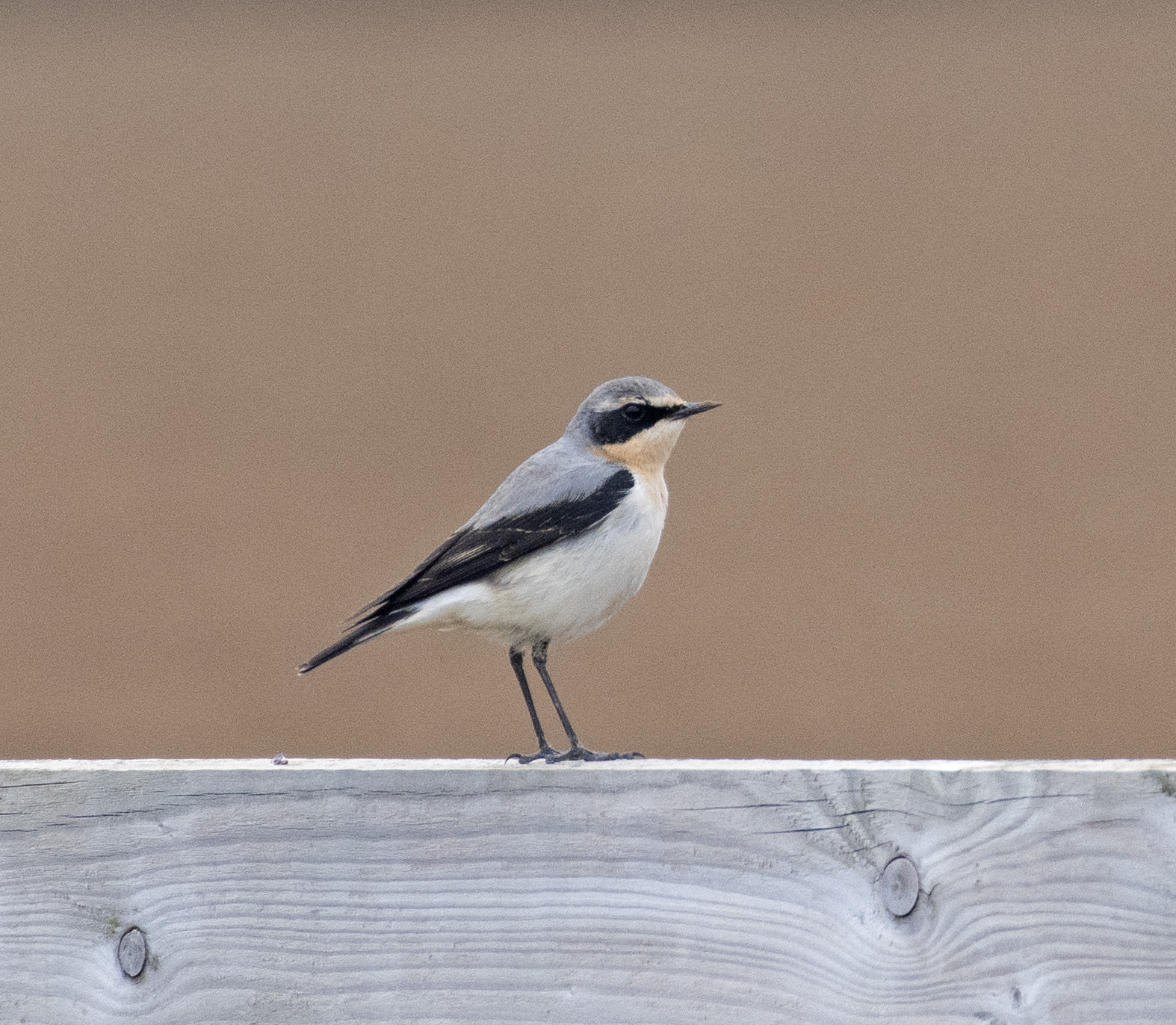 Northern Wheatear was a nice addition to the 1 km list towards the end of March (Ed Stubbs).

The main geographical feature is the River Wey, which winds through the area. The river here is set in steep valley that runs through a broad floodplain. Much of it is wooded, with extensive alder carr. There are also areas of tall fen, grassland and standing water. Prior to moving I'd birded it just a couple of times, despite it being so close to where I previously lived.

There are some areas of open countryside in the area too, including a new SANGs site that's very close to home and boasts some decent grassland and meadow habitat, an area of arable farmland, a tiny farm reservoir and an estate with open parkland.

Operating in such a small radius means numbers aren't the name of the game. My main motivation is to explore and get to know these areas that are new to me and to try to document as many breeding records as I can. Anyway, on to March …

The month began well, with three Lesser Black-backed Gulls cruising north over the SANGs. This species is scarce to rare in south-west Surrey during the winter and birds moving overhead in February and March are some of the first spring pointers around here. 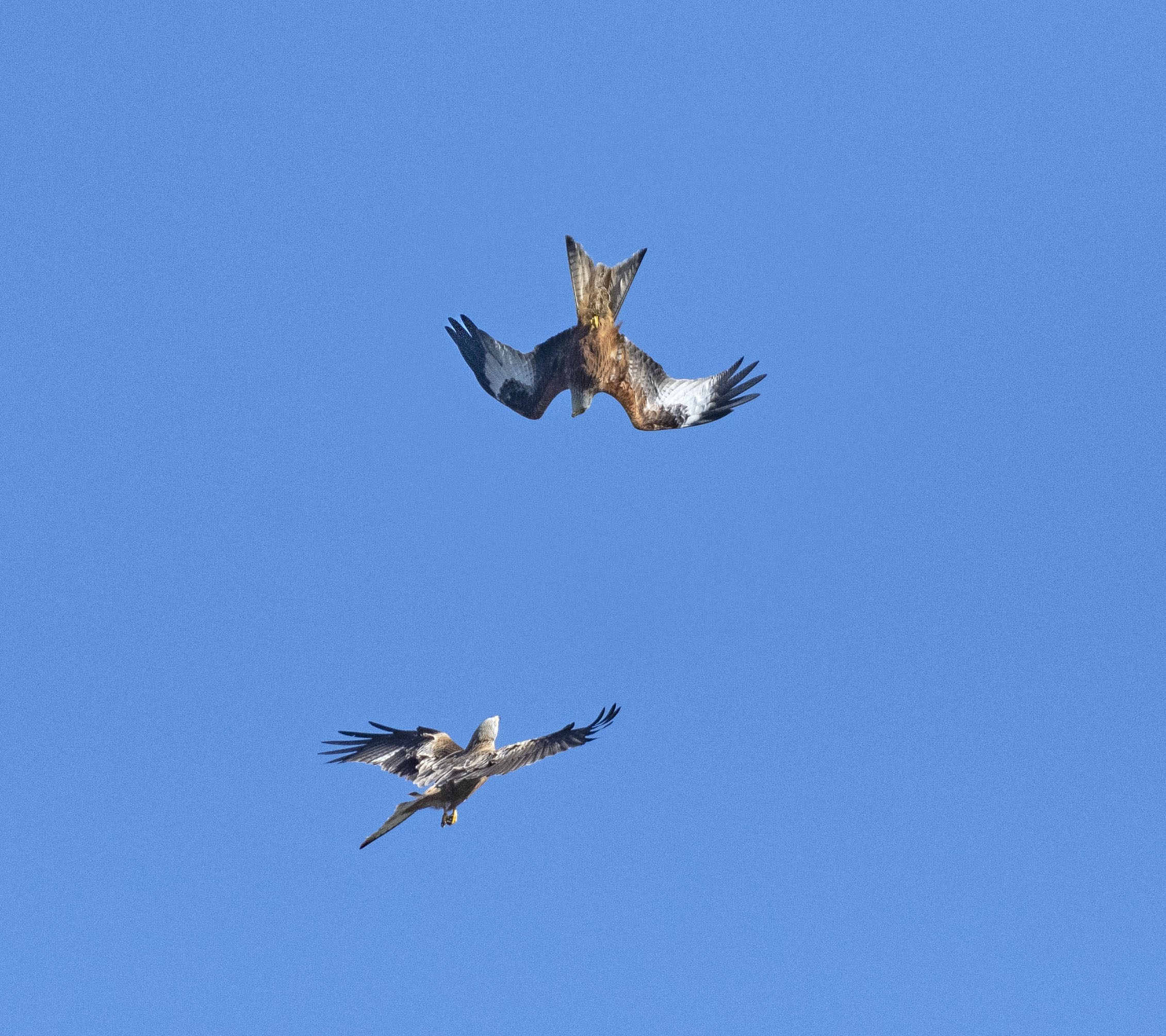 Red Kites interacting in the oft-bright conditions during the month (Ed Stubbs).

What may prove to be the most unexpected species of 2022 occurred on 4th: Northern Goshawk. A juvenile, the bird caused mayhem as it dashed through the parkland site, sending corvids and Woodpigeons scattering en masse. Although increasing rapidly in Surrey this is still a rare bird and is not known from anywhere within a 6 km radius of my home, let alone 1 km. Presumably having a winter wander, I was naturally chuffed to get such a bird on the list, which stood at 70 after this encounter.

On 8th I scored only my third duck species of the year when two pairs of Eurasian Teal graced the river valley. The area is too wooded and enclosed to be attractive to waterbirds so these felt like a good one to get, though it may be that small numbers winter or pass through – something I'll hopefully learn as I get to know the area in the years to come.

The following day I finally got Common Kingfisher in the bag and, with plenty of holes located along the banks of the Wey, I suspect I might be able to confirm a breeding record later in the year. An arrival of Common Chiffchaffs occurred on 10th, wrapping up a nice three-day run of 1 km ticks.

On the night of 15th persistence paid off when I finally connected with Little Owl at the parkland site. My friend Sam used to play cricket here and his retro gen proved useful in pinning down this species, which has become rather elusive locally in recent years. A belated quartet of Blackcaps along the river made it 76 for the year on 22nd. 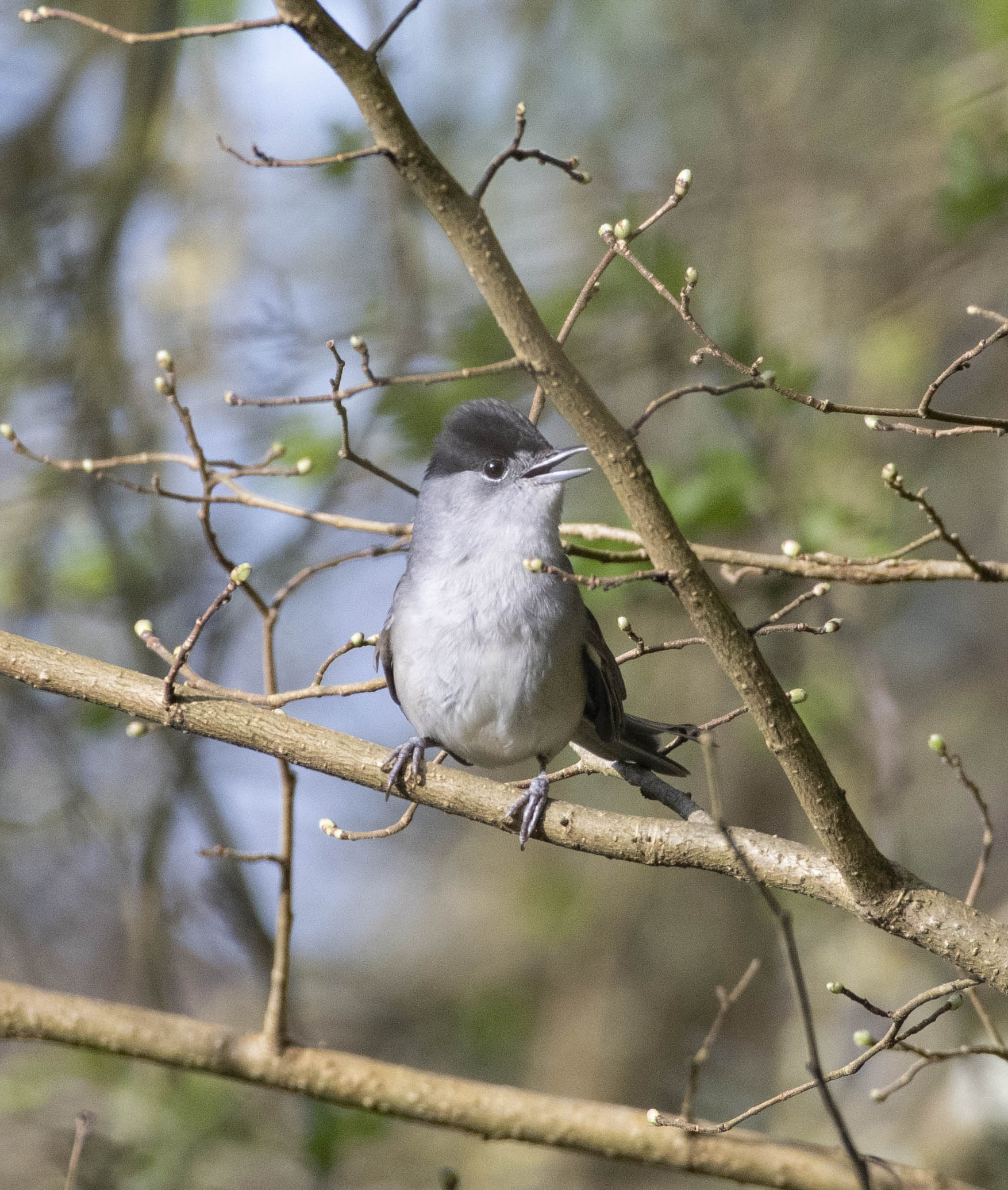 Probably my best March bird occurred on 25th although it won't boost my list – a White Wagtail in a freshly ploughed field. This is a scarce passage migrant in south-west Surrey and I went the entirety of 2021 without seeing one, so to get one a couple of hundred metres from home was very cool. 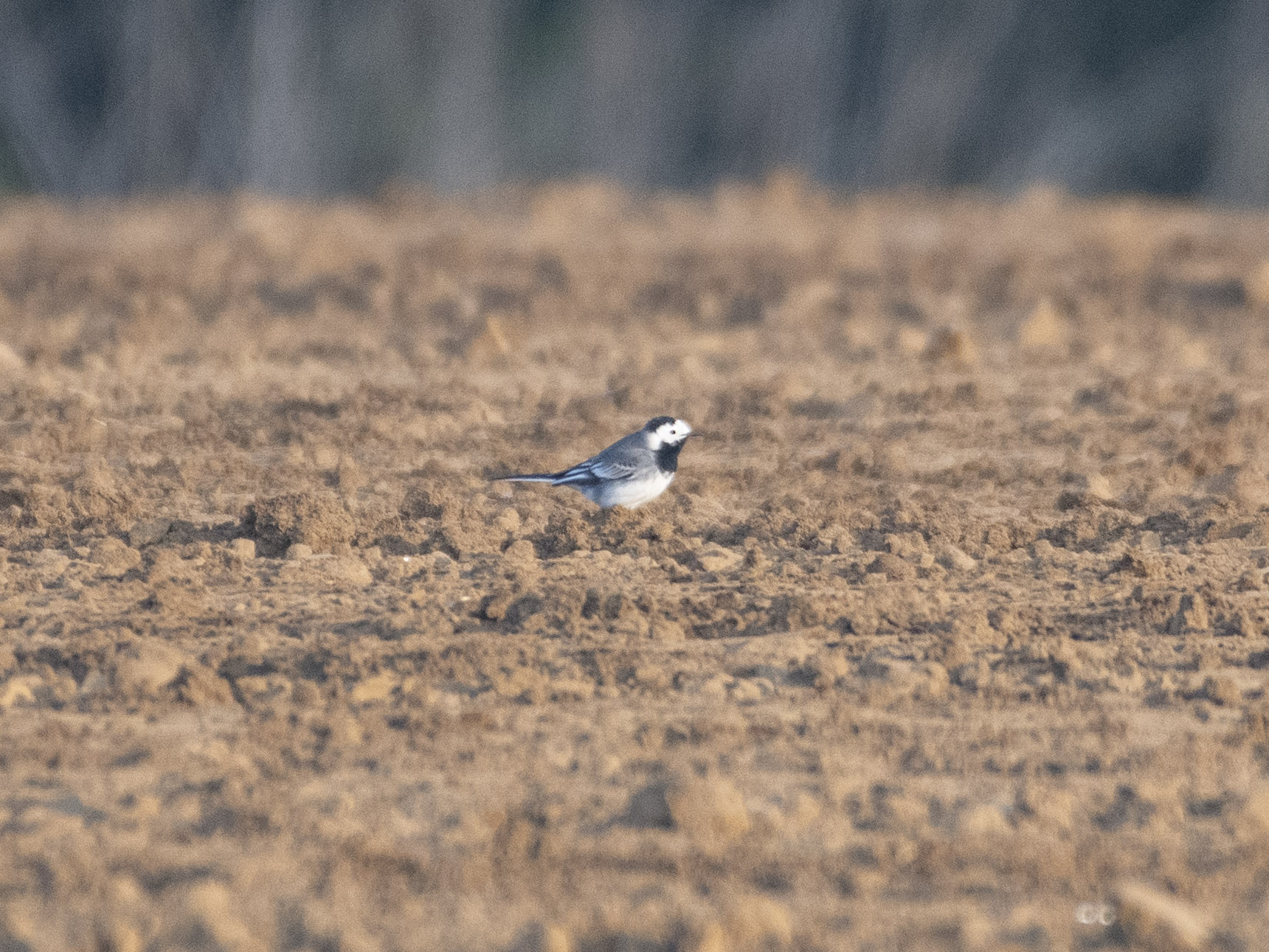 A White Wagtail passed through on 25th (Ed Stubbs).

The month wrapped up really nicely on 28th, when a quick post-work check of the SANGs produced the moment patchwatchers yearn for every spring: a cracking male Northern Wheatear. This was shortly followed by a flyover pair of Northern Shoveler, a species I didn't expect to log in the 1 km. Hitting 78 by the end of March was tidy, as I'd only fancied 90 or so for the year ... maybe 100 is possible.

In terms of stuff I need, a few ones I'd fancy to bag by the end of the year remain, such as Mute Swan, Eurasian Coot and Lesser Redpoll. There is however one species that is ridiculous for having not yet fallen: Great Cormorant. How I haven't run into one during the last two and a bit months beggars belief; despite 50 observations of cormorant at 15 different south-west Surrey sites this year, I've not had one in the 1 km!

It's not just been about year ticks in March, though. The month has provided me with intimate encounters with a small population of breeding Marsh Tits along the river, unexpected numbers of Brambling (which is having a super winter – I wouldn't be surprised if this species evades future 1 km lists), discovering a pleasing number of Eurasian Skylark territories and much more.

On a wider level most of the birding is unspectacular, but it's great fun – and on more than one occasion I've opted to head out on foot to bird the 1 km instead of hopping in the car to cover one of my other patches. There's always more stuff to learn about the birds in our local areas and conducting this 1 km challenge has already shown me that. For one thing, I never thought I'd spend so much time scanning the skies for a cormorant …

March bits from 'patch proper' (south-west Surrey) have been pretty good as well. The clear highlight was finally finding local Garganey – something I've wanted to achieve for years. Clapping my eyes on two drakes and a female on a misty morning of 21st will be a year highlight, let alone a March one. 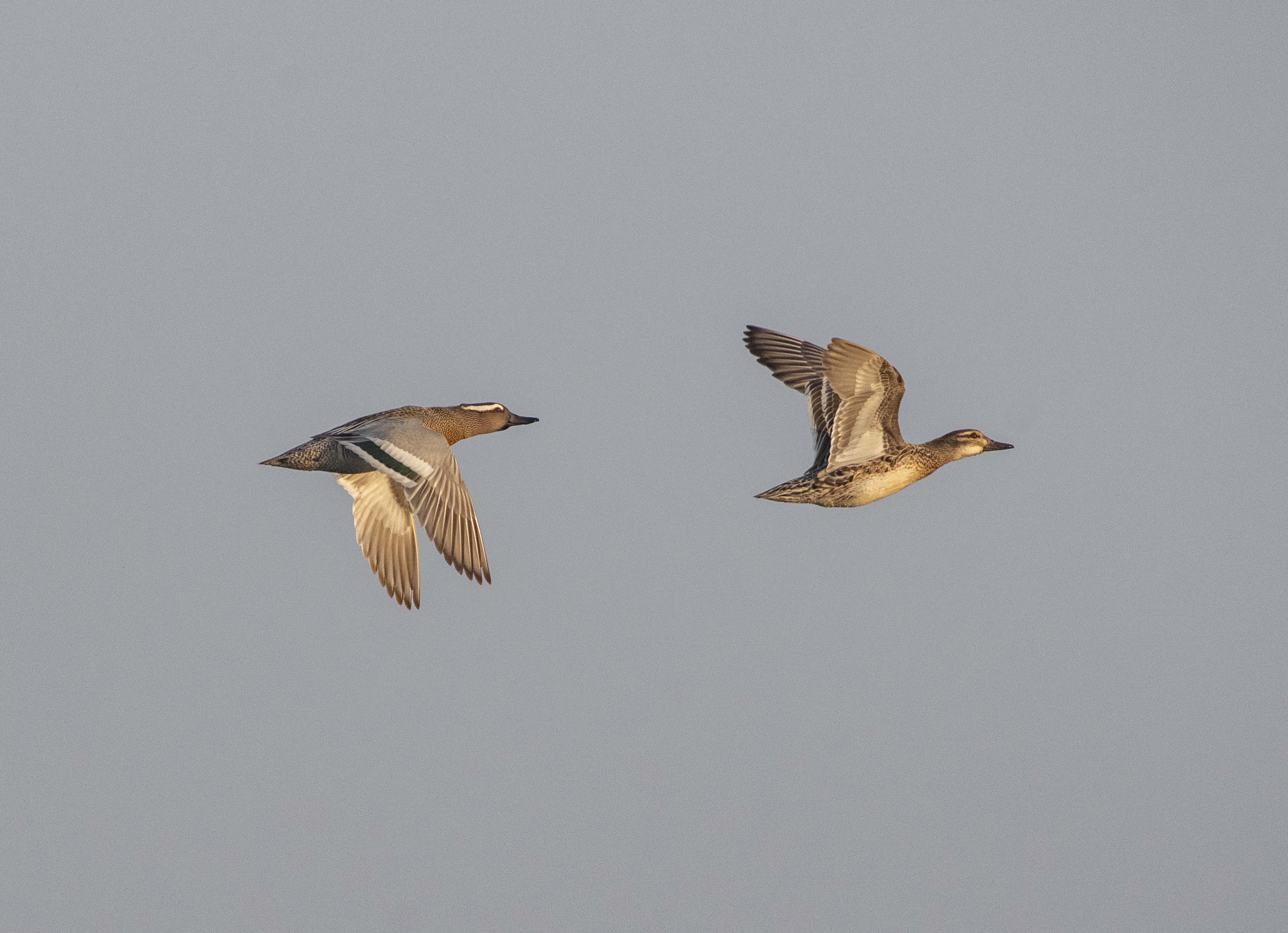 Other good moments have included my earliest-ever UK Western Osprey on 19th over Thursley Common (where the Eurasian Curlew pair returned mid-month), a couple of Black Redstarts on 29th (a species I missed last year), jamming into the new local phenomenon of overland Mediterranean Gull passage on a couple of occasions and perennially pleasurable time spent with some of my area's scarcer breeding residents. Here's to April and beyond. 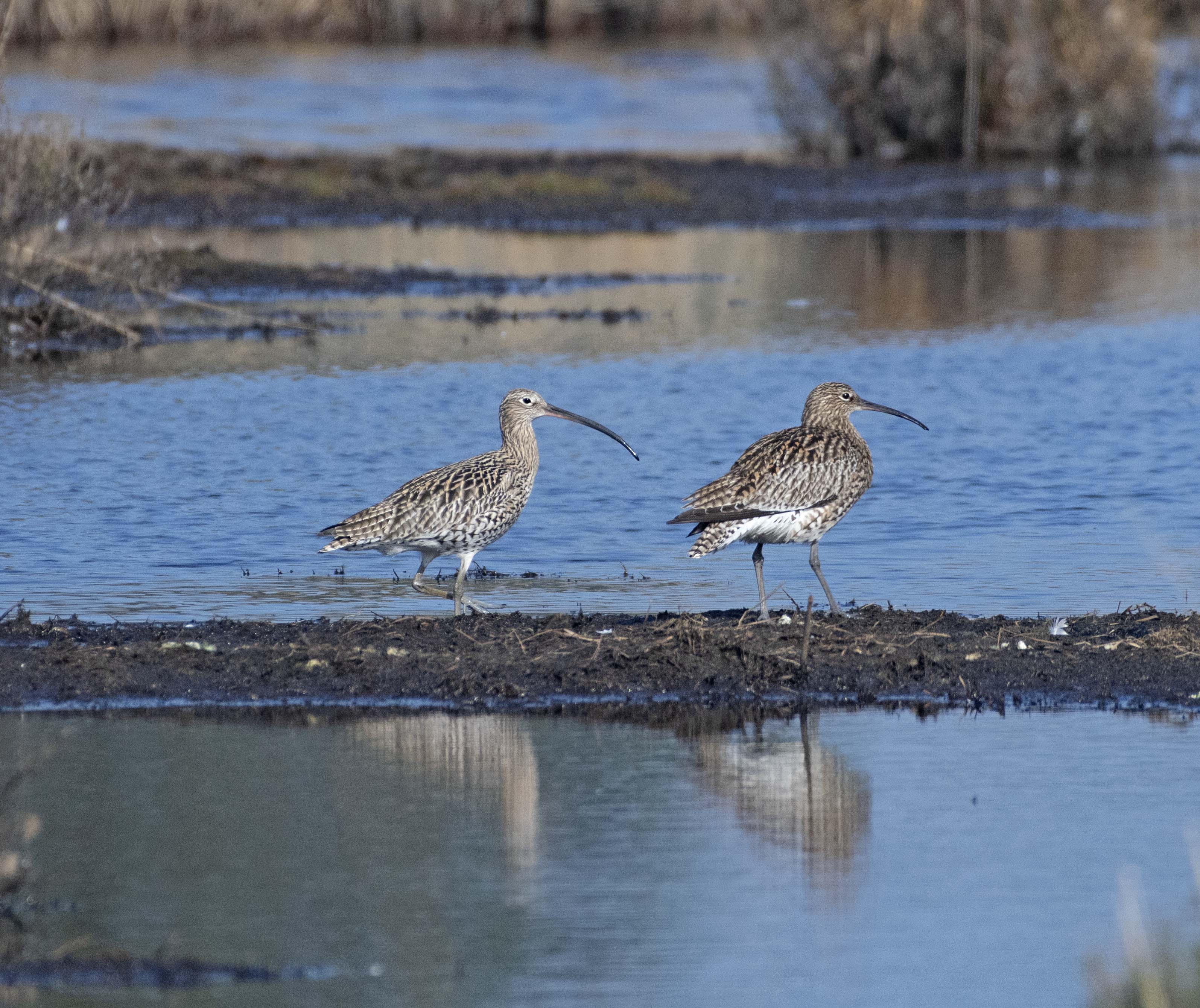