Three hours of uphill trails, tree roots and rock scrambles after our hike began, progress stalled at a beautiful but significant waterfall. On the other side, across a natural basin of rainforest run-off kept topped to the brim by a cascading torrent, lay our route back down the mountain. In the shallows, a tiny brown snake slithered away, reminding us of other potential hazards in this exotic but suddenly challenging tropical setting.

Full immersion is certainly one way to test the waterproofing properties of a new binocular, but thankfully it didn't quite come to that. After negotiating the thigh-deep crossing with care, we managed to wade through with optics, cameras and other equipment largely intact, before continuing on what had become something of an expedition. Here in Honduras's Pico Bonito National Park, Leica had certainly laid on a novel day of field testing for its new Trinovid range. 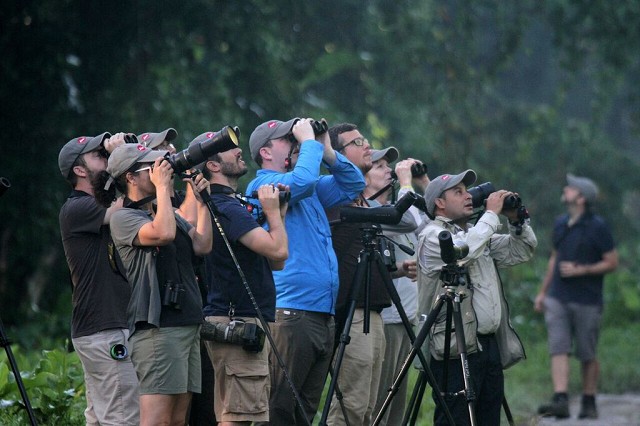 The possibility of a full-scale dunking may have been troubling for me, but if history is anything to go by it wouldn't have bothered the Trinovid. In the early days of the British Birdwatching Fair, the Leica stand featured a large fish tank in which a submerged Trinovid binocular stood on display. This was in the early Nineties, when full waterproofing was more the exception than the norm, and bemused passers-by would stop and stare at the sunken optics. Leica staff enjoyed rolling up their sleeves to retrieve the Trinovids from their watery resting place, towel-dry them and offer potential customers the chance to try and buy. Hey presto — one waterproof binocular, guaranteed.

At the time the Trinovid was Leica's flagship range. These days that title has been given to the Ultravids, but Leica still sees an important role for its ‘heritage' brand — hence this international launch event. Like other high-end optics manufacturers, it knows there is more value in the market than the traditional top tier alone, and there is a battle taking place for a share of the next-level aspirational sector. This explains the company's description of the new Trinovid as a "premium entry-level product".

Interestingly, one of the biggest differences between the new and old Trinovids is the price, which has actually fallen. Leica says it is aiming to attract birders to its brand at a lower price point, hence the counter-intuitive strategy of lowering rather than increasing the retail cost of its new product.

That's obviously good news for potential purchasers, who will now pay less for a new Trinovid binocular than they would have done for an old model of the same specification, but this will have entailed savings somewhere along the line.

The key difference is in the glass used. According to Leica USA's Jeff Bouton, who masterminded the launch event, the new Trinovids still use quality ED glass, but a different grade to that deployed in the top-of-the-range Ultravids — hence the reduction in cost.

Honduras provided interesting conditions in which to compare the differences between the 8x42 and 10x42 Trinovids. In bright tropical sunshine, the greater light-gathering capacity of the 8x binocular felt negligible, although in deep, dark rainforest environs or as sunlight faded in late afternoon, the enhanced brightness factor kicked in. At other times, the choice between 8x and 10x was the perennial trade-off between magnification, field of view and brightness — something that's always down to individual preference. Both models handled very well.

In terms of design, the new Trinovid range fits neatly within the Leica line-up. The subtly textured and rubber-armoured, matt-black finish resonates with the look of the range-topping Ultravids, but the binoculars differ visually in having the dioptre adjustment located below the right eyepiece rather than on top of the central focusing wheel. The ridged adjustment ring is well marked but doesn't lock; it was actually a little too loose on the sample binocular I examined, meaning it occasionally got nudged inadvertently off its correct setting. Such glitches are not uncommon on early or pre-production models, and presumably will have been rectified on the final units reaching dealers.

A rainguard, tethered objective lens covers and standard neckstrap came with our sample binoculars, but the Trinovids have also been launched along with Leica's new Adventure Strap. This accessory could prove very useful should your bins ever happen to end up in water — as they almost did in our case — because they will float rather than sink. Its everyday use, however, seems less likely to appeal to birders. Though the harness is comfortable to wear, keeps the binoculars close to the user's chest and also doubles as a fold-up case (no other pouch is supplied with the Trinovids), the need for rapid access to the optics in the field means birders would be less likely to keep them zipped up inside the protective front casing of the strap.

Such details aside, Leica will undoubtedly be pleased with its latest launches. Optics manufacturers rarely stage these international events without good reason, and in this case it's a clear sign of Leica's intent to make an impact on its target market with the new Trinovid range.

Our short time in Honduras was well spent with optics and birds, and our base at The Lodge at Pico Bonito provided the perfect viewing location — from examining the fine iridescent detail of a dazzling range of hummingbirds to long-range scanning of the rainforest canopy occasionally illuminated by bright metallic-blue male Lovely Cotingas. We examined day-roosting Spectacled and Black-and-white Owls, night-time mammals including Kinkajou and Mexican Hairy Dwarf Porcupine, took a side-trip to see the country's sole endemic, Honduran Emerald, and also a range of forest-edge species at some botanic gardens; we even got to test the binoculars on a vagrant Franklin's Gull as the sun sank below the horizon on the Caribbean coast. 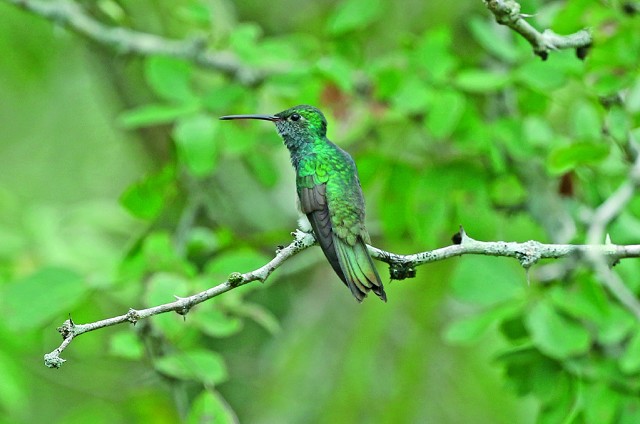 The endemic Honduran Emerald was one of many fantastic species on which the new Trinovids were tested (Photo: Dominic Mitchell)

Putting the new Trinovids through their paces in the novel and often well-lit habitats of the Neotropics is one thing, but how they perform in the context of regular use during the low light of a northern European winter will be another interesting test. With this in mind, a full assessment in proper field-testing conditions will be undertaken shortly by Mike Alibone.

Thanks to The Lodge at Pico Bonito and to Jeff Bouton, Leica Sports Optics and other participants in the launch event.