The fourth and final breeding season of Bird Atlas 2007–11 starts today [1st April]. We have made fantastic progress over the first three years, but there is still much to do in this final season. The accuracy of the distribution maps relies on birders like you submitting your records. Having accurate distribution maps will be vital for planning conservation action over the next decade or more. We need records of both common and scarce breeding species in all 10-km squares in Britain and Ireland. We've been working closely with the Rare Breeding Birds Panel to ensure that scarce and rare breeding birds are mapped and listed at the appropriate level so you can submit your records with confidence.

In this final season, the aims are:

Coverage has generally been excellent across Britain, but more patchy in Ireland due to the much lower number of birdwatchers thinly spread across the country. The Blackcap map below is a good example of the excellent coverage in Britain and clearly highlights some 10-km squares in Ireland that have had no or very few visits by birdwatchers. The map also shows considerable range expansion in Scotland and Ireland since the last Breeding Atlas in 1988–91. The provisional results for Ireland suggest there has been an increase of 118% in the number of occupied 10-km squares. Further fieldwork in the squares that have so far been poorly covered should also find more birds. 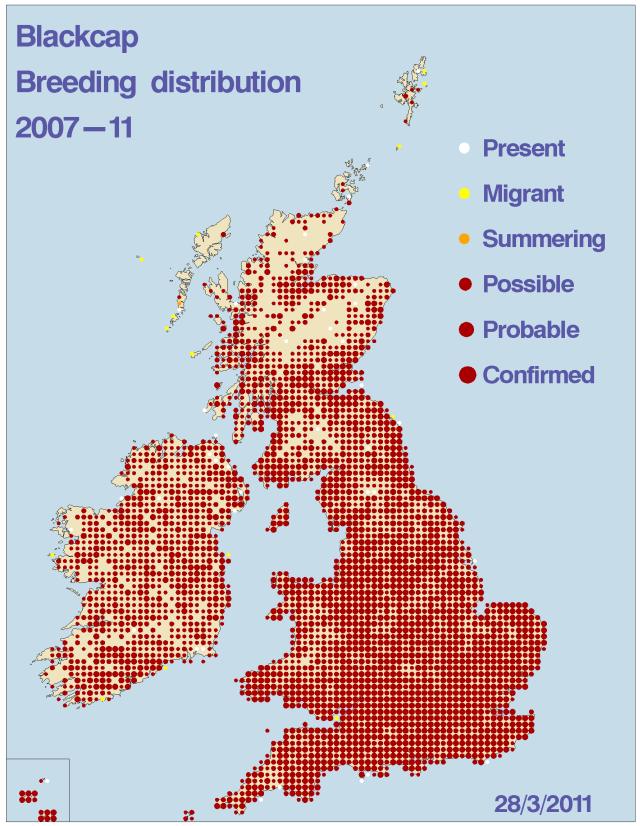 We can all help to improve this map by looking for breeding evidence this spring and summer. The map shows confirmed breeding in 47% of 10-km squares, probable breeding in 30% and possible breeding in 23% of squares. We should easily be able to upgrade the 'possible' records (e.g. singing birds in suitable habitat) to 'probable' records (e.g. pair, bird holding territory) through casual birding. Upgrading to confirmed breeding is trickier, but looking for adults carrying food back to a nest or recently fledged young later in the season is the best way.

Turning our attention to the number of species recorded breeding in each 10-km square, the map for County Kerry shows very few species recorded in some squares. In Ireland, we have operated a chequerboard system for the timed counts, so every other square will have received the minimum coverage by the end of the summer. The squares that have not had timed counts clearly show up (e.g. IV66, IV77). Anyone visiting Rossbeigh, in IV69, for the White-winged Scoter could usefully (and quickly!) fill some gaps in the adjacent squares of IV79 and IV68. 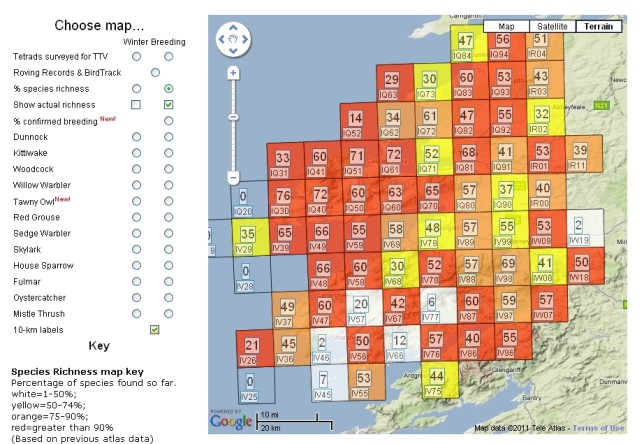 Percentage of expected 'species richness' achieved in 10-km squares in County Kerry (based on a comparison to data from the 1988–91 Atlas). The numbers indicate the number of species recorded with some level of breeding evidence (possible, probable or confirmed level). (Map: BTO.)

You can see maps of your own local area on the online Regional Results pages, so take a look and see which squares near you need more help.

Finally, recording breeding evidence is really important this spring and summer. There are still many common and widespread species that have not been confirmed breeding. If you login at www.birdatlas.net, you can see which species have not yet been confirmed breeding by clicking on 'My local gaps' or access species lists for any square in Britain or Ireland using 'Any Square Summary'. For example, the map below shows the percentage of species confirmed breeding in the 10-km squares in Ayrshire. The squares coloured white, yellow or orange are all high priority for visits this spring. 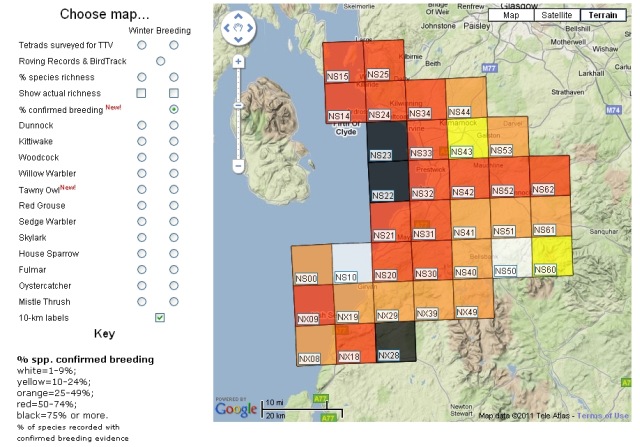 Thank you to everyone who has contributed records to the Atlas so far. If you have a couple of hours to spare over the next four months then please consider taking on a tetrad for timed counts (two one-hour counts are required) in those areas where there are still gaps. All your birdwatching records are useful, from a singing Chiffchaff, a roding Woodcock to the exciting encounter with a displaying Goshawk or a pair of Hawfinch. Please submit your records online at www.birdatlas.net and help ensure we produce a set of comprehensive distribution maps for all species.