On Sunday [18 July], we had returned the day before from a tough but rewarding annual waterbird monitoring expedition to the montane tundra. The day had started slowly, mainly taking care of ourselves and the equipment. Part of our group had left early in the morning to drive south and prepare for the coming working week – we were due to stay at Kilpisjärvi Biological Station for a few days with Hanna Laakkonen and Aleksi Lehikoinen to take part in a course for Arctic Fox nest monitoring.

We were on our way to the local grocery store in the village of Kilpisjärvi but before leaving lingered a while at the parking place to marvel at the nice scenery over the lake and Swedish and Norwegian sides of the Scandinavian Mountains. Hanna and Aleksi had already hopped into the van, and I, too, had the driver's door open when I heard a distant song phrase which I did not recognise. I waited for a while and the phrase repeated.

Telling Hanna and Aleksi that I might have heard a Greenish Warbler singing in the distance, Aleksi too got out to listen. We agreed that it wasn't a Greenish Warbler but something which we could not quite make sense of. We approached the song, and although it became clearer and clearer we couldn't put our fingers on it. 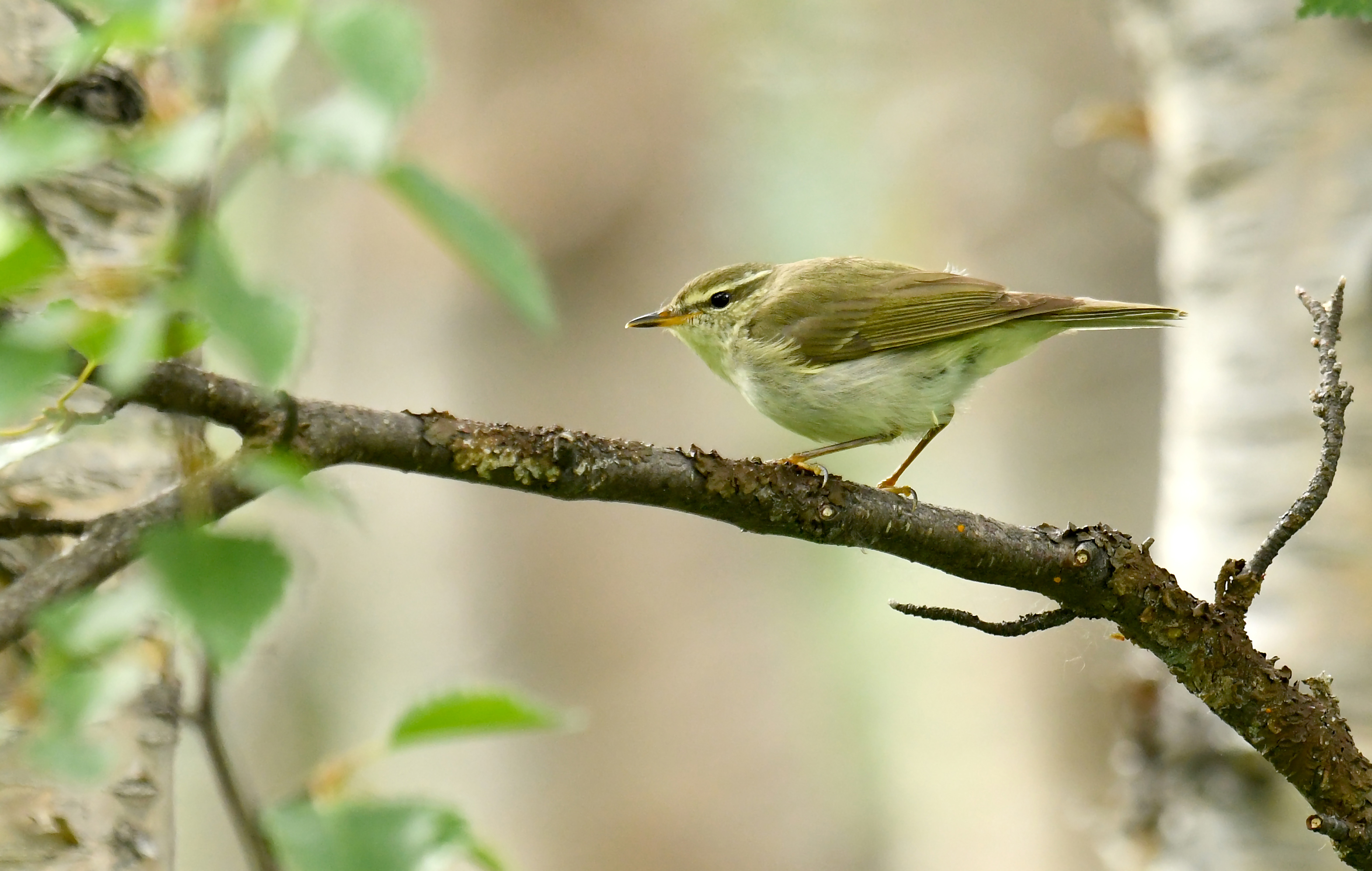 A distant song while out shopping for groceries alerted Petteri to a mysterious Phylloscopus warbler (Petteri Lehikoinen).

This could get serious

Approaching the bird, at the same time we tried to record it on our phones. A Willow Warbler sang from the same spot, and for a moment we wondered if it was just this Willow Warbler occasionally singing an aberrant song. I spotted a male Great Tit – and thought that this must be the suspect – when it flew away and another bird appeared into view. This bird looked like an Arctic Warbler, and my heart skipped a beat. I ran to fetch the car closer for camera and ringing equipment while simultaneously trying to find recordings of the two recent splits from Arctic Warbler – Japanese and Kamchatka Leaf Warblers. I suspected that Kamchatka Leaf Warbler should be a more potential vagrant than Japanese Leaf Warbler and, to my surprise, the recording sounded very similar to the bird singing behind me. At this point, I realised that this could get very serious!

When I returned, the bird had been silent for a short period, though was apparently still present. I played a recording of a Kamchatka Leaf Warbler to Hanna and Aleksi from my phone and the bird immediately responded with a virtually identical phrase. It was already early evening and the bird was in a small mountain birch forest patch in the middle of the village, so there was a risk that it might soon stop singing or continue its journey. Therefore, we decided to act quickly to ensure that the bird was documented as well as possible. Aleksi recorded and photographed the bird while Hanna and I set up a mist net.

Suspecting a Kamchatka Leaf Warbler, the team trapped the bird to take the required measurements – as well as a feather sample for DNA testing (Petteri Lehikoinen).

We didn't have a recording of Kamchatka that we could play on a loop by the side of the mist net, so I decided to try to see if the bird reacted to the song of Arctic Warbler. The bird did arrive near the net to inspect the playback, but did not really react to it. Typically, an Arctic would react to a potential intruder by flicking its wings and raising its crown feathers. After staying still for a moment, the bird took off away from the playback, but accidentally hit the other end of the net and was trapped.

Rather fortunately, Jyrki Lehto and Esko Pasanen arrived at this stage, since Esko carried with him some ringing equipment that I had left at the biological station – after all, we were just out shopping for groceries. We also called Roni Väisänen to discuss the important measurements that we should note down to help identify the bird. Then we quickly measured, photographed and released the bird in the same spot where it had been singing.

The bird was in very good condition with a full muscle score and considerable fat stores, suggesting that the bird was still migrating. It appeared brighter and more yellowish than any Arctic Warblers I had previously seen in Finland or Russia during the summer months. Soon we had to leave the site but heard the bird singing once more before departing. 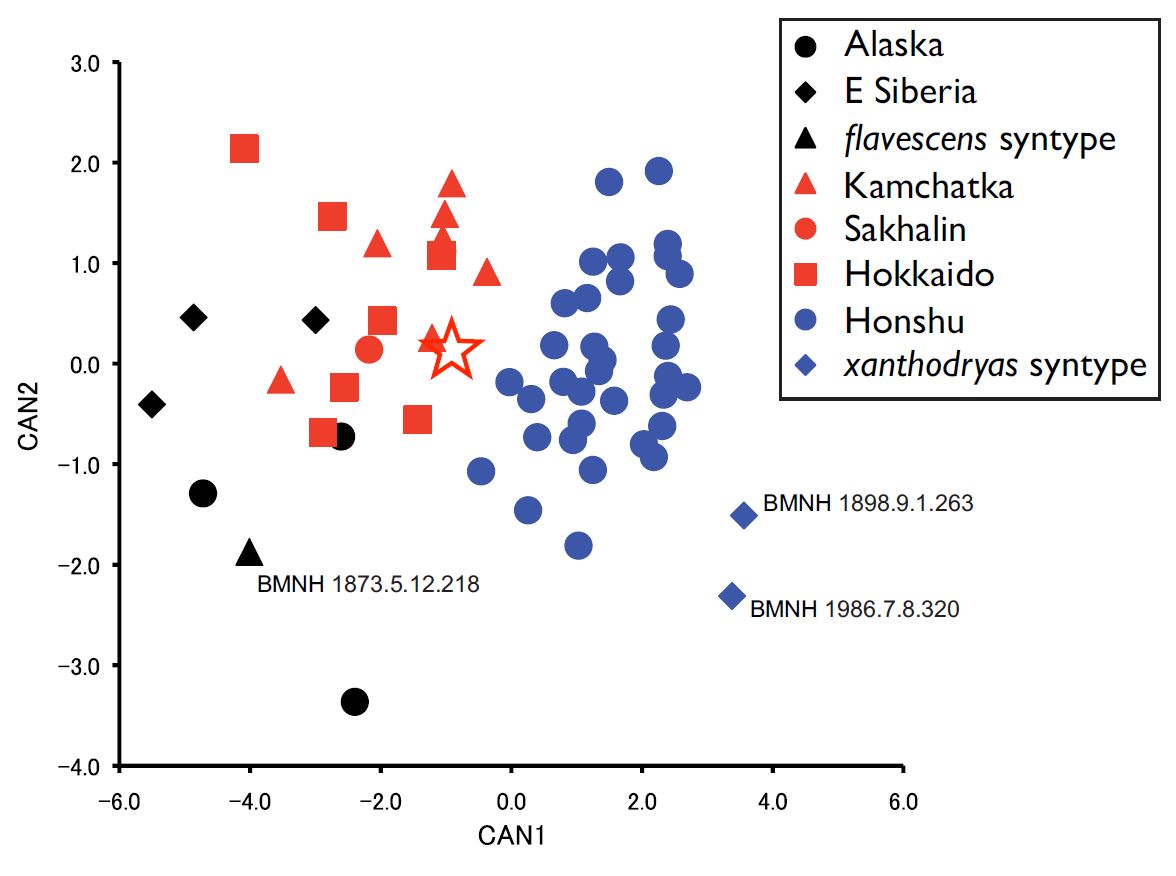 Too good to be true?

The whole situation was over in about an hour and only disbelief remained. While the bird's appearance, measurements, calls and song matched Kamchatka Leaf Warbler with near perfection, it all just seemed too good to be true. A bird from the Far East – which has never been seen before in the Western Palearctic – happens to stop at the village of Kilpisjärvi and sing a few phrases in the early evening just when we happened to admire the scenery from the grocery store's car park! It was a close call and we could have easily missed the bird completely.

Happily, the next day the bird was found again, but it had moved around 500 m or so. It was present to the very late evening and even the twitchers from south of Finland got to see it. However, the day after – when writing this – it has not been found again. With any luck, an mtDNA analysis from a dropped feather will provide an even more definitive identification.

The Kamchatka Leaf Warbler is marginally longer-billed than Arctic Warbler, while averaging brighter green above and more yellowish on the underparts and supercillium (Petteri Lehikoinen).

Split from Arctic and Japanese Leaf Warblers as recently as 2011, Kamchatka Leaf Warbler breeds in taiga forests and forest edges of the Kamchatka peninsula, as well as on Hokkaido, Sakhalin and the Kuril Islands. A late spring migrant, the species usually moves up the Chinese coast from South-East Asia during the latter half of May.

Although the two species overlap considerably, Kamchatka is said to have a marginally longer bill, tarsi and tail than Arctic, with a typically longer outermost primary (Eaton et al 2016). It is also noted as being brighter green above and more yellowish on the throat and supercillium.

A statistical analysis of morphological traits of proven Arctic, Kamchatka Leaf and Japanese Leaf Warblers (Figure 1) shows that the Finnish warbler (starred) is clustered with proven records of Kamchatka Leaf Warbler based on measurements taken during the ringing process.

However, it is an incredibly difficult identification using plumage and biometrics, leaving call and song (as well as DNA sequencing) as the best identification criteria.

Vocalisations of the two species differ considerably, with the scratchier, more rhythmic song of Kamchatka contrasting with the more staccato and mechanical song of Arctic, while the call of Kamchatka is drier and lower-pitched.

Arctic Warbler song is described by Alström (2011) as a slightly harsh, fast rattling zezezezezezezezezezeze, gradually increasing in strength before fading slightly towards the end. In contrast, the song of Kamchatka Leaf Warbler is a "slightly harsh, fast, rather short series of notes with a regular pulsating rhythm" (Alström 2011). The rhythm quickly distinguishes it from Arctic, resulting in two different syllable types, A and B (Figure 2). These are typically arranged in 'AAB' phrases given between three and eight times in succession. The song of Japanese Leaf Warbler largely resembles that of Kamchatka but is typically slower, lower-pitched, less sharp and harsh, and with a different rhythm (such as 'AAAB'). 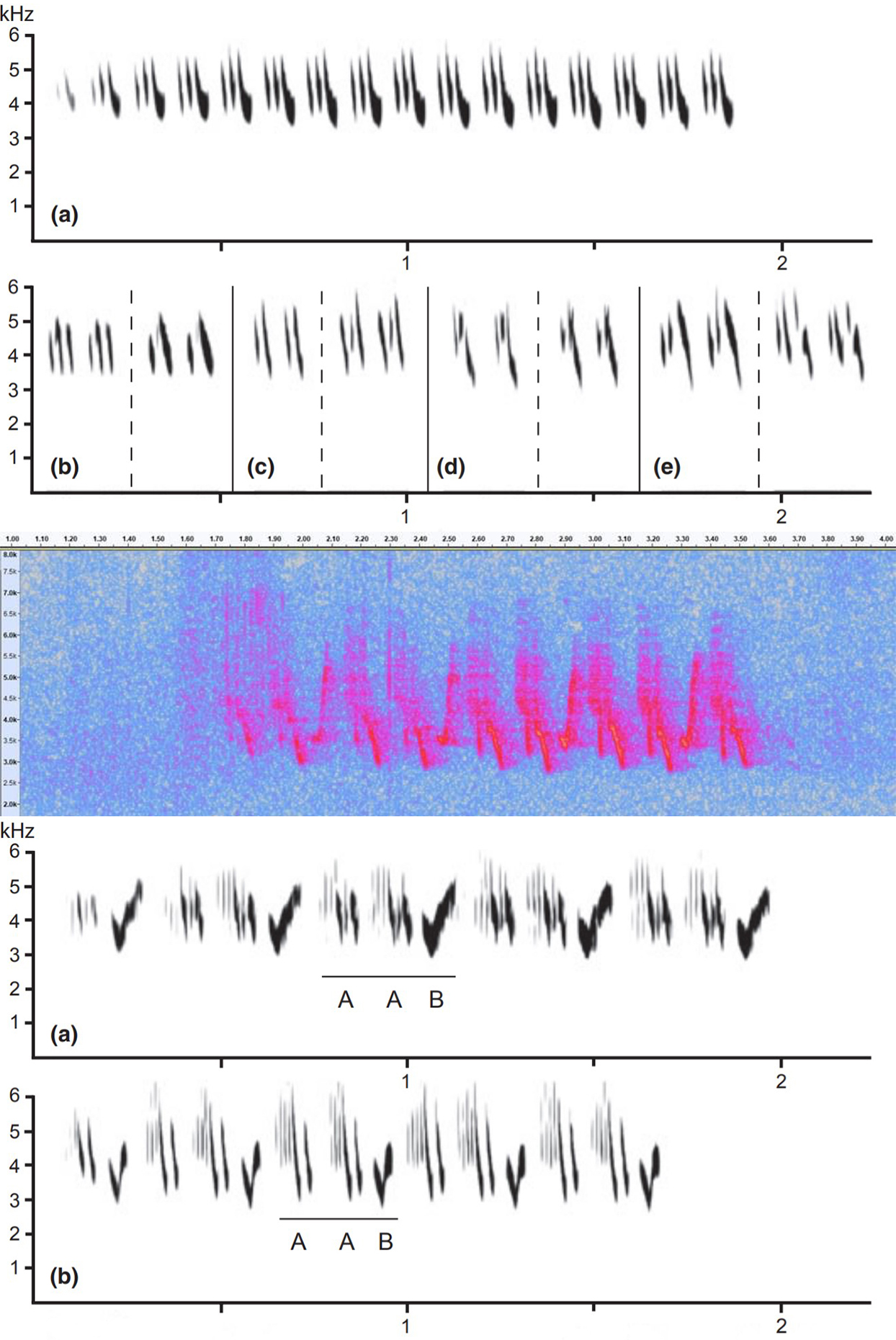 On a sonogram (Figure 2), Kamchatka Leaf Warbler appears as downward sweeps followed by an upward sweep. In Arctic Warbler, this instead appears straighter, with a mechanical, insect-like trill. Each segment of Kamchatka song is split into more discrete phrases than the more consistent, higher-pitched song of Arctic. A sonogram of Japanese Leaf Warbler is spaced wider still, with a lower pitch.

A Kamchatka call can be described a dry, crackling trrrt, lower-pitched, longer and harder-sounding than the high-pitched dzrit of Arctic (Eaton et al 2016), recalling that of Taiga Flycatcher. A calling Japanese Leaf Warbler typically sounds similar to Kamchatka, but is lower-pitched and less grating. The call of the Finnish bird can be briefly heard at 0:36 in the above Soundcloud recording.