We do not do our biding via online petitions or Twitter campaigns, we would not accept funds towards anything other than the fundraising total and all monies go towards delivered, on-the-ground benefit for European Turtle Doves.

The first journey was truly epic, ill prepared, out of shape and inexperienced; we crashed into the world of pure endurance with over 500 km covered on foot in just 14 days, from Lakenheath RSPB and Saltholme RSPB. A continuous march from Suffolk, up the east coast to the North-East with the blisters, chafing and grit to show for it.

This was our proving ground and we realised we were capable of much more than we previously understood. Walking up the Saltholme entrance track, friends and family there to greet us was also one of, if not the, proudest moment of my life. 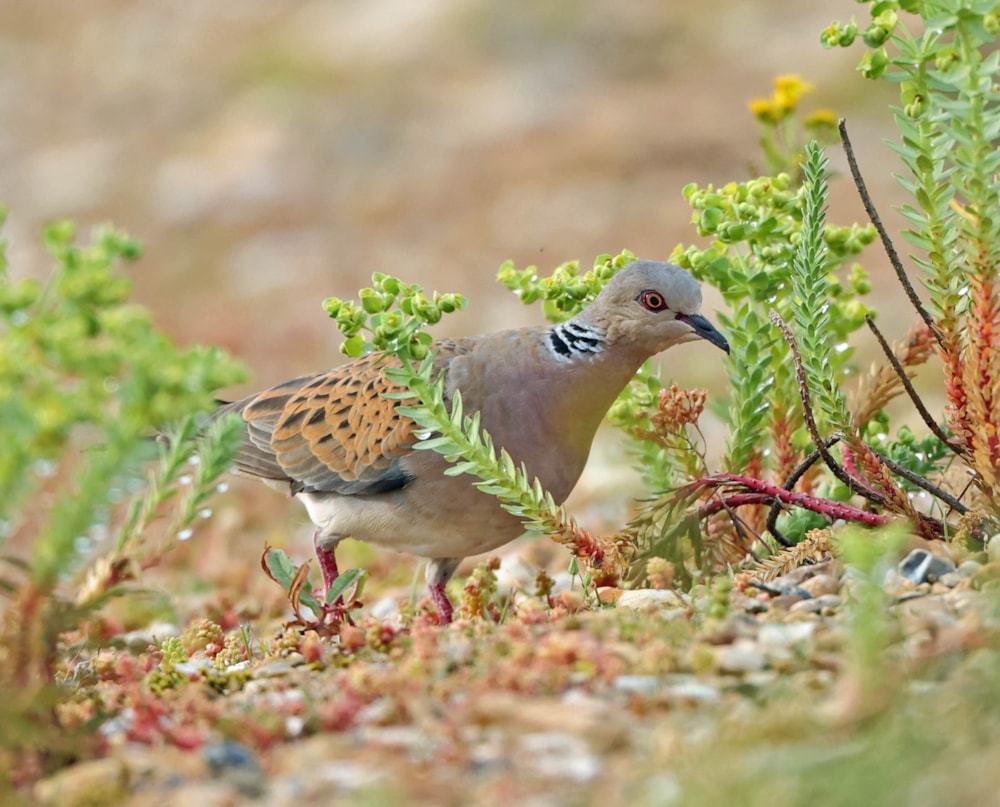 The bird that all the graft and pain is for: European Turtle Dove (Mark Leitch).

Having walked and talked all the way, camping, eating and sleeping together for two weeks, we had plenty of time to dream, plan and devise a further journey. That journey was Dove Step 2 – our take on a triathlon connecting the Suffolk coast with Spain.

Training through the winter of 2014-15 we mastered the previously unknown arts of road cycling and sea kayaking. The latter is particularly dangerous, although I didn't realise that at the time! Capsizes, near drowning and hypothermia taught us that soon enough. The time of year gifted us winter cycle training on the lanes of Suffolk and Northumberland.

When launch day came, I immediately capsized, teammate Gooders was seasick for the whole of the first day at sea, I would occasionally paddle over and splash him with sea water to remove the accumulated vomit down his front. Stu capsized and lost much of his food and water ration for the day. Luckily, we had drilled recoveries and got him back afloat quickly. The two days at sea, covering over-channel distance were life affirming and banked our winter training.

The next leg of our triathlon was cycling, from Calais to Bordeaux, we capably completed the 920 km of cycling in just six days – not bad for a lad who made his road-bike debut just six months prior! I understand that a '100 miler' is considered respectable in cycling circles, we did several back to back.

The winter training at sea and in the saddle did nothing for our walking endurance and the 225 km and six days spent walking were pure brutality, in my case, on an already broken body.

In terms of unadulterated brutality and sheer grit, no single part of the Dove Step epic had rivalled the walking leg of Dove Step 2 for sheer suffering. It was unbelievable. I am eternally grateful to my long-term teammate Rob for his company and support. Together we made it to Bayonne, with the Pyrenees and Spanish border in front of us and the Atlantic to our right-hand side. In 13 days we covered almost 1,200 km – all for turtle doves.

The sheer emotion of completing the first Dove Step is only matched by the third journey. This was the purest and to my mind the pinnacle of Dove Step journeys. A non-stop 1,100-km march connecting Tarifa beach, the southern tip of Spain, with Gijon on the north coast, between 5 February and 4 March 2017. 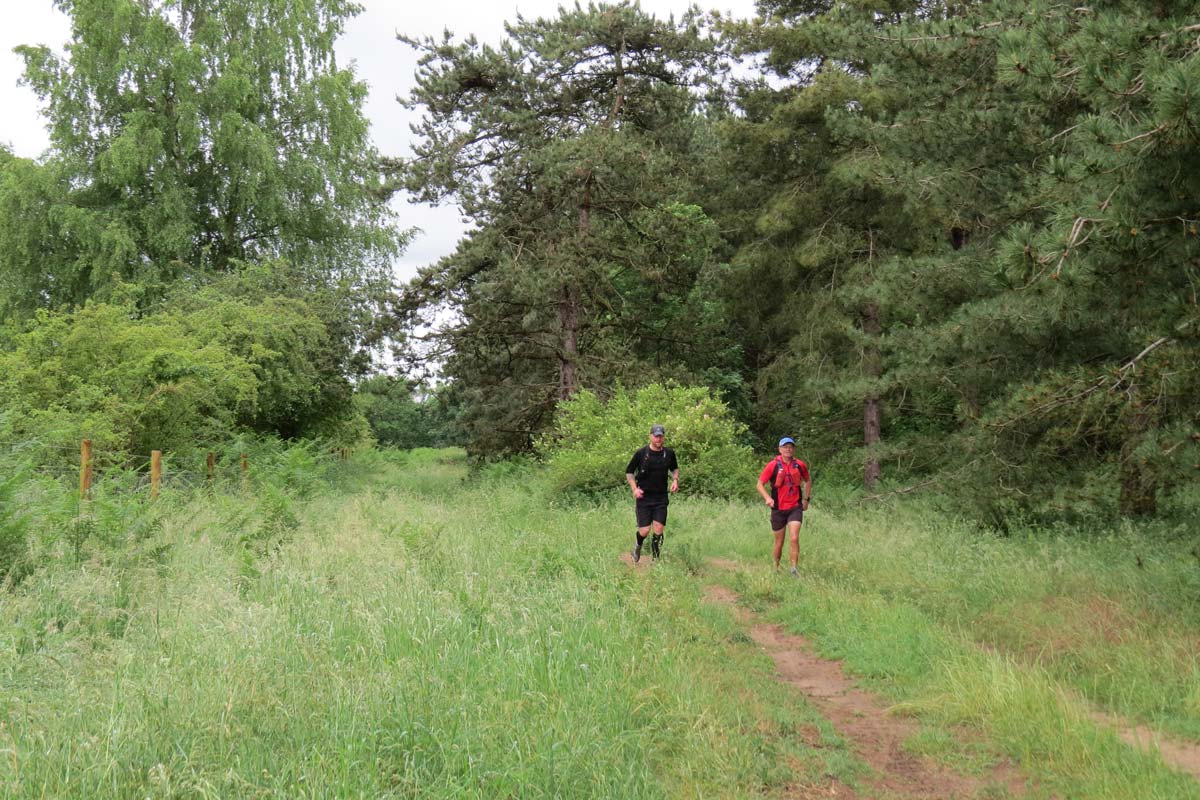 Running tens of kilometres really takes it out of you.

By this point we had funded the creation of 9 ha of habitat in the east of England, much-needed research on the African wintering grounds in Senegal, supplementary feeding and further research into the best feeding habit in England. Our endurance was directly translating into tangible, delivered and demonstrable benefit for our migratory and farmland birds. Issues of conservation, extinction and migratory species in free-fall decline can be overwhelming. Focusing on just the one species allowed me to rationalize the enormity of all these issues.

The endeavour of walking 1,100 km in 28 days takes a uniquely brutal toll on the body. I would be out from dawn to late afternoon or evening (sometimes it was dark), depending on the daily distance. I experienced every variation of temperature and weather in covering the whole country, lowland and mountain ranges cumulating in the mighty Picos de Europa. River crossings, torrential rain, hypothermia and exertion induced hallucinations were par for the course.

I do not consider we will better Dove Step 3 – but we are all born to lose and we have to live to win.

After an amount of recovery, we ventured once more into the breach in 2019. We conjoined attendance at the Spurn Migfest with a 260-km cycle to get there – followed by a marathon. I was joined by teammate Nick for the cycle leg, which was followed up by the marathon the next morning. In terms of athletic output, this was definitely the Dove Step peak! Crucially, our efforts raised sufficient funds to directly support the North Yorkshire Turtle Dove Project. With funds deployed via wildflower plots for seed food, pond management and scrub planting for nest sites.

Getting hit by a car, on the back of coronavirus restrictions, made 2020 a catastrophic year in Dove Step terms, putting us back at least two years. The initial impact hospitalized me for four days and rehabilitation is ongoing with the potential for corrective surgery still pending.

The furthest I have walked in a day before is 80 km and the furthest I have run in a day is more than 50 km. The St Edmunds Way long-distance footpath runs past my door and connects Manningtree with Brandon, spanning much of Suffolk. It offers a perfect opportunity to drop a '50/50' output –  50 miles on day one and around 50 km on day two. We called this latest effort 'Dove Step Rehab'.

Nick Moran (Dove Step 3.1 team member) was also in rehab mode, with 'long covid' symptoms holding him back. However, he still tackled the Round Norfolk Epic; a 320-km cycle ride around the Norfolk county boundary – 65 km further than the longest cycling day of any Dove Step prior! 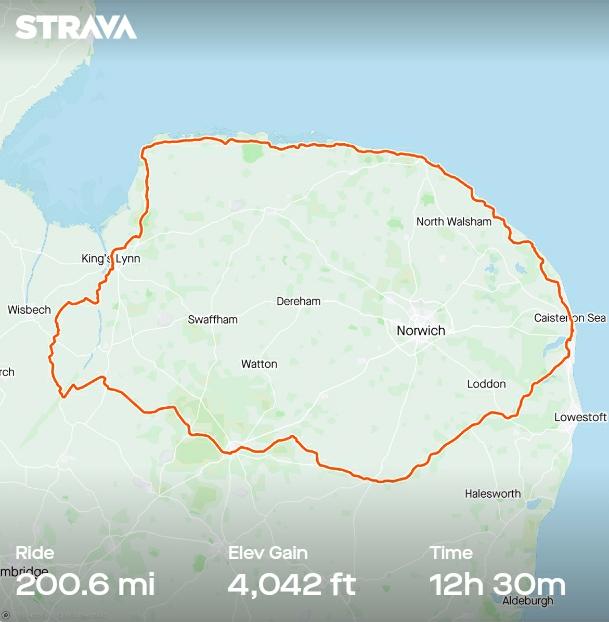 Running 80 km in a day, a year out from the car crash, was a daunting task, compounded by the further milage the next day. Waking up in Manningtree on the morning of Friday 18 June was a damp affair. I was gifted an hour or so running before the downpours started again. With the preceding spell of warm weather, path-side vegetation had bloomed, then bowed over under the weight of the rain water. At times hiding the route and veiling safe footings. It also served to drench any and all areas not already drenched by rain.

Once you leave the valley bottom of the Stour and move cross country, the terrain becomes surprisingly punchy; with 700 m of elevation across the 80 km from Manningtree to Bury St Edmund. A strategic sit-down lunch and change into dry clothes at the Mill Hotel Sudbury was most welcome. Long-time Dove Step teammate Malcolm Fairley had the dubious honour of my company after 50 km of running and then transporting the filthy kit back home to Bury St Edmunds!

Still, without the kit change and rest bite, the remaining milage would have been unbearable. There is a unique level of attrition that builds up when you spend hours in soaking kit! The vegetation along the route nettled, brambled and irritated my legs with grass seeds and the constant contact. The cumulative stings and abrasion meant I hardly slept over night as my legs throbbed and itched.

On minimal sleep I was amazed to be able to run the next morning; well for the first 10 or so km, then off-and-on till around 28-km mark and arrival in Thetford. Pleased with progress, I then walked in the remaining 16 km between the BTO headquarters and Brandon – the finish line – along the Little Ouse river.

It was an honour to be joined by RSPB and Operation Turtle Dove staff for the last leg of the endurance and the finish-line cake was also something to behold! 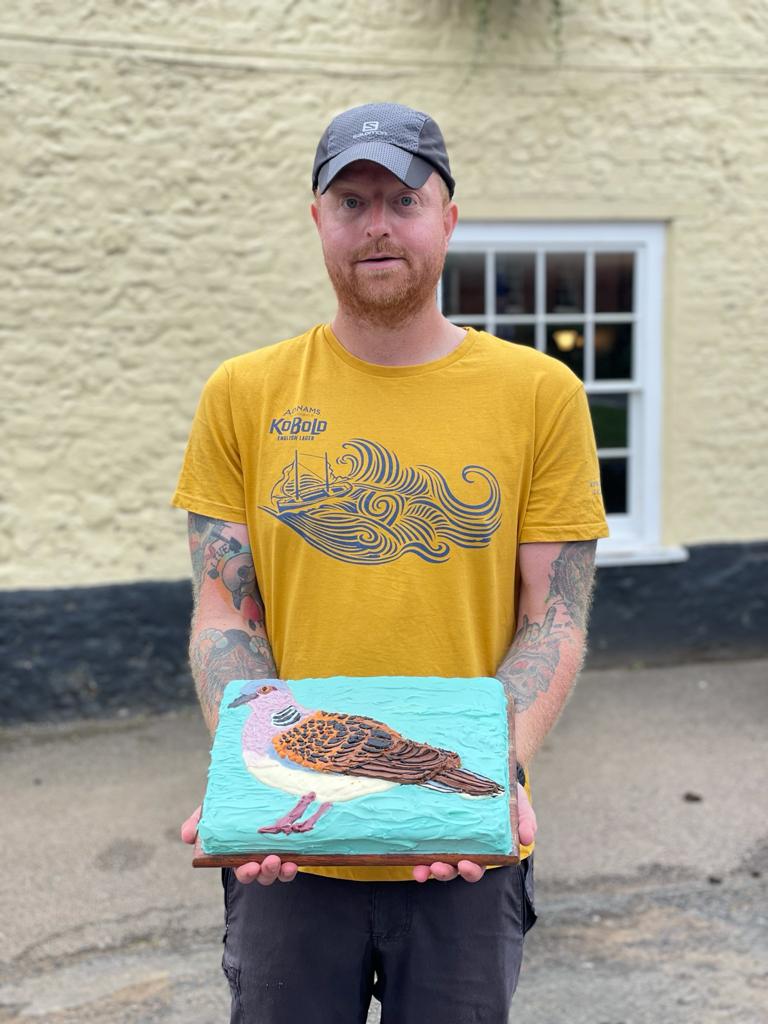 Jonny poses with the turtle dove cake at the finish line of Dove Step rehab.

So, in June 2021 we righted the wrongs of 2020, dropping more miles and funds for Operation Turtle Dove and specifically the North Yorks Turtle Dove Project. We also hit our fund-raising target of £21k raised in 2021, the ambition was previously to hit £20k in the year 2020.

Without high profile coverage, the ‘Captain Tom Moore' effect, or billionaire donors the funds we've attracted have solely come from friends, family and the birding community to which we belong. We are eternally grateful to everyone who has donated both over the years and this year.