What kind of mattress suits you best for a good night's sleep? Is it the spring kind? Foam? Maybe air or water? Or perhaps even one that has hexagonal cells called a honeycomb base? If it is the latter, you are sharing this honeycomb experience with Red-tailed Amazon – except that, in the case of the parrot, it is real honeycomb.

This has been observed in a long-running project by the Brazilian conservation organisation, Society for Wildlife Research and Environmental Education (SPVS), in the south-east of the country, especially in the State of Paraná. The Loro Parque Fundación finances this project, and since 1995 has supported activities for the study and protection of this species.

Red-tailed Amazons nest in forested low-lying islands and on neighbouring coastal plains, where they face diverse challenges to reproduce successfully. One of those challenges is that suitable nest cavities, both natural and artificial, can become colonised by introduced aggressive Africanized Honeybees. While the bees are in residence the parrots are excluded, but after the bees vacate a nest, the parrots return to use the cavity again in the following breeding season. Pieces of broken honeycomb piled-up on the cavity floor, although not the usual substrate, do not deter the breeding amazons. Indeed, one can imagine that the body heat from the chicks (and brooding female) gradually softens the honeycomb in a way somewhat akin to a natural memory foam...! 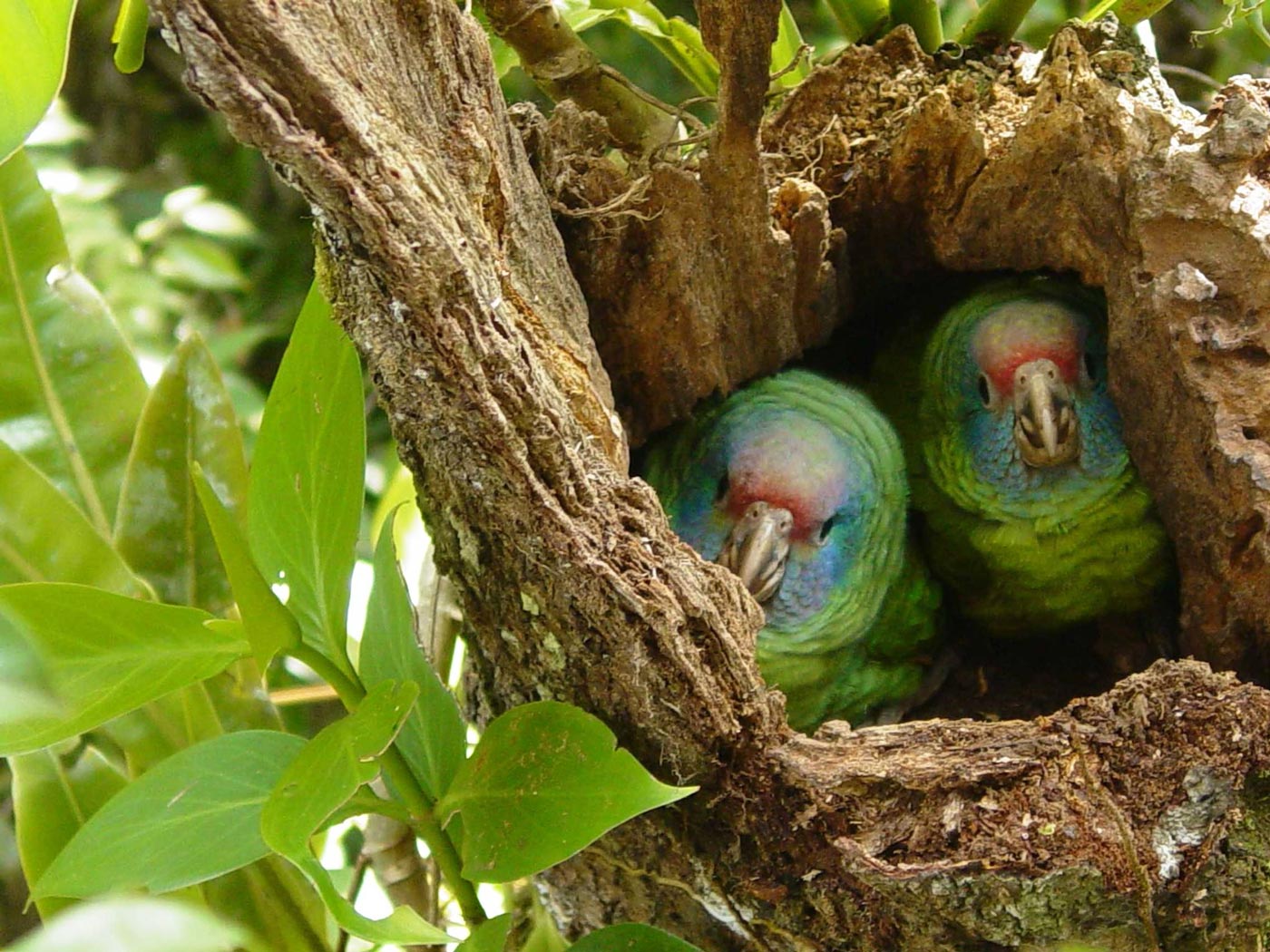 Unfortunately, occupation of artificial nests by the bees has increased in the past year, despite efforts to keep them in check. One initiative, which has been in progress for several years, is to train and support people from local communities to keep native species of bees. The objectives include to help native bees sustain healthy populations, and to provide local people with an additional source of income from the sale of honey, which in turn gives them an incentive to help protect the forest.

During the 2019-20 breeding season in Paraná, Red-tailed Amazon hatchlings were at a 10-year low. A total of 105 cavities suitable for forming nests were monitored, of which 74 eventually had breeding activity. A total of 155 eggs were laid, from which 69 chicks hatched. Of those, only 15 successfully fledged. On the south coast of São Paulo State, 23 suitable nest cavities were monitored, with only five of them showing breeding activity. In those, nine eggs were laid, seven chicks hatched and five of them successfully fledged. The poor results are surprising, the numbers being a third lower than the previous breeding season, and similar to the results prior to the installation of artificial nests from 2003.

SPVS researchers postulate that natural predators, human interference and climate change could all have influenced the reproductive output. Predation was higher, and climate changes took temperatures to extremes, increasing the possibility of diseases and decreasing the food supply. Even with the research team in place to monitor the breeding areas, cases of theft of parrot chicks for illegal sale are still recorded, especially on the coast of São Paulo, as well as illegal felling of trees used by the amazons for nesting.

The project has witnessed a population increase in from perhaps fewer than 2,500 in the mid-1990s to almost 10,000 nowadays, and it has been removed from the IUCN Red List as a threatened species. However, the presence of the above threats shows the prudence of continued monitoring. In 2019, the Red-tailed Amazon annual census recorded approximately 9,365 individuals, with about 80% of the population concentrated in Paraná.

Monitoring of nests can be arduous. Not only is the forest dense with mosquitos during the breeding season, but every nest tree must be climbed several times during the season using all the expected safe climbing paraphernalia. After so many years, the field team is hardened to it, and knows it must continue. However, the project is now testing a new method of nest monitoring using technology: it is using drones to search for new breeding sites and to verify occupied tree cavities, and it may well be that this becomes the default in the future. 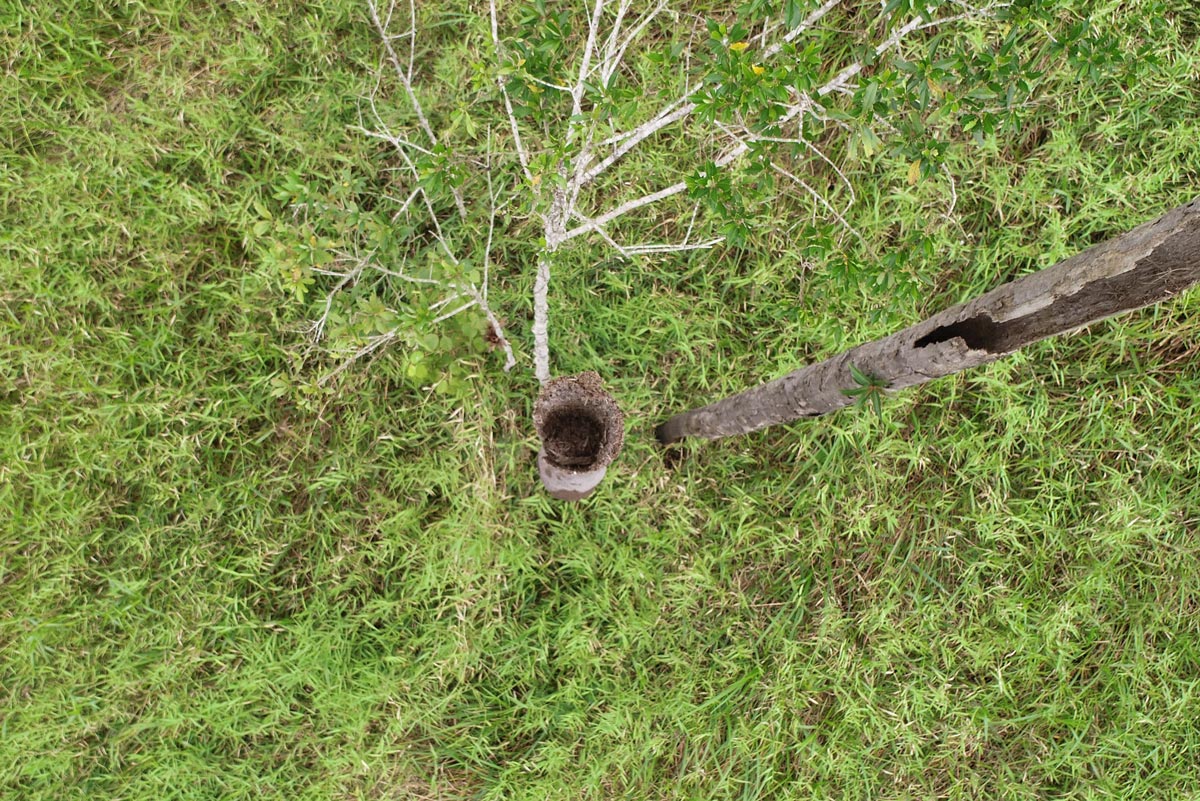 Drones take the strain out of nest monitoring, for it means that conservationists don't have to climb up trees to see what's inside. Here's a drone view of a Red-tailed Amazon nest (SPVS).