In the frame: photo hides in Lincolnshire

Cast your mind back to February 2020. A time before coronavirus, when Storm Dennis battered the country with mega winds and rain for a good part of the month. It was during this period that I booked a stay with Wildlife Photography Hides, based near Bourne in Lincolnshire.

Together with fellow photographer Chris, we travelled across the Pennines before meeting up with owner Tom Robinson for a breakfast chat, followed by two days and one night of amazing photography.

After bacon rolls and mugs of tea and coffee, we headed away from the main farm on a short drive to what was to be our 'home' for the next 24 hours: Pond Hide. A previously empty grass field, bordered by a railway line on one side and a river on the other, had been dug out, developed and transformed into a superb reed-fringed pond, complete with luxury hide and a sophisticated flash set-up for night-time photography. The construction, electrics and other work on the hide were all done by Tom, apart from the plastering, for which a friend lent a hand. 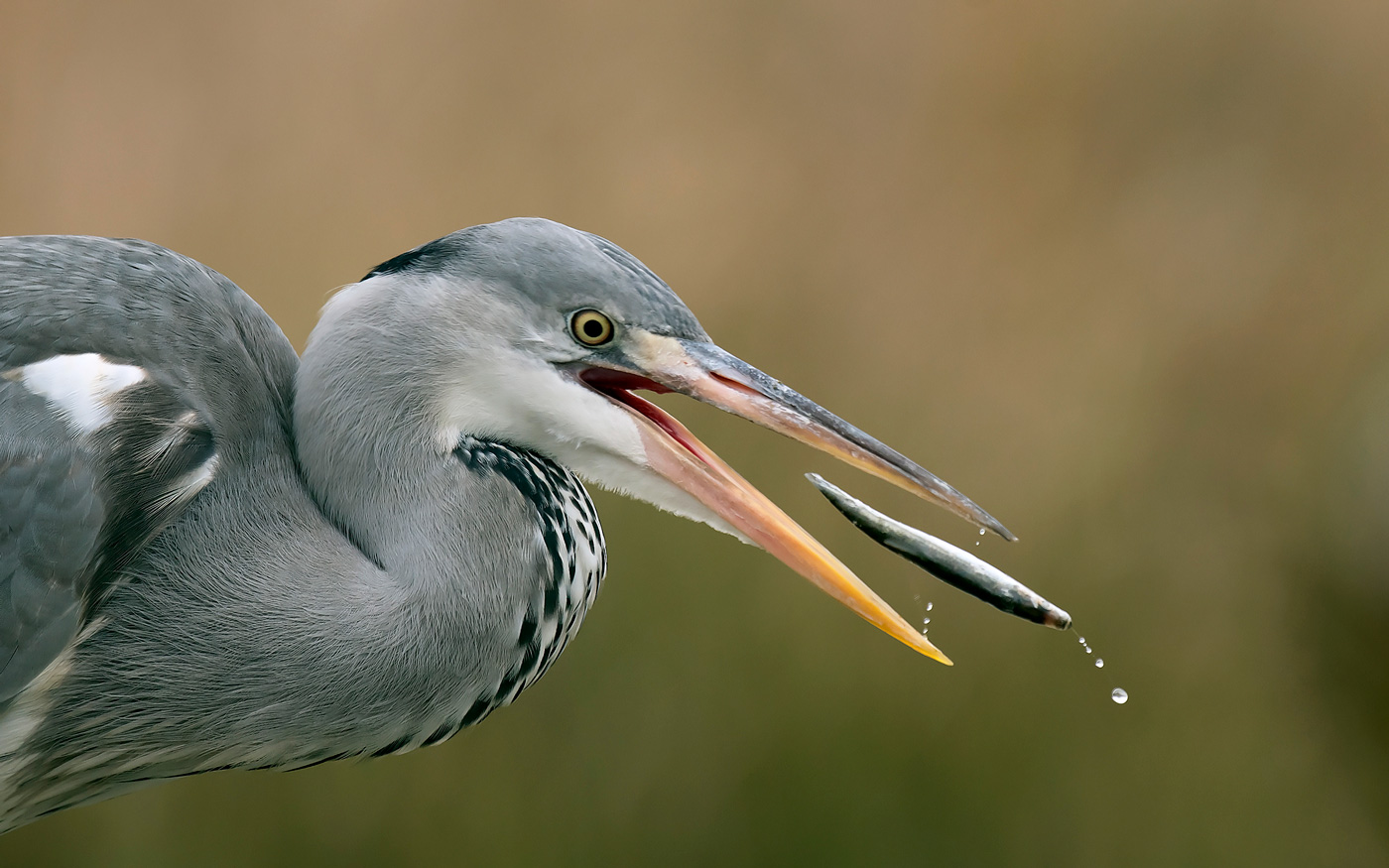 Despite appalling weather, Steve was able to capture some fine images of species such as Grey Heron from Tom Robinson's expertly crafted Pond Hide (Steve Young).

I was stunned when I entered the hide. It was palatial; boots were removed immediately so we wouldn't dirty the carpets(!). In the kitchen the kettle was put on for more tea, a log burner was prepared and lit and we sat down on comfortable padded benches; it also featured a composting toilet and there was a single bed in the kitchen – I've stayed in worse B&Bs than this.

One side of the hide faced the pond while the other looked over various perches that would be used for night-time photography of, hopefully, Tawny Owl and Otter. Tripods weren't needed, as support heads were provided at the carefully positioned lens openings in the one-way glass – no peering through tiny slats to see if the bird was there, rather full-length mirrored glass was in place allowing us to see out clearly, but keeping us hidden from the birds.

Perches were in place ready for hoped-for visits by Common Kingfisher, and fish were put in appropriate areas to entice the birds within photographic range; then it was just a matter of settling down in the warmth of the hide and waiting. Not knowing what to expect I'd brought 300 mm and 500 mm lenses, plus a converter. I ended up using both lenses depending on the species being photographed. 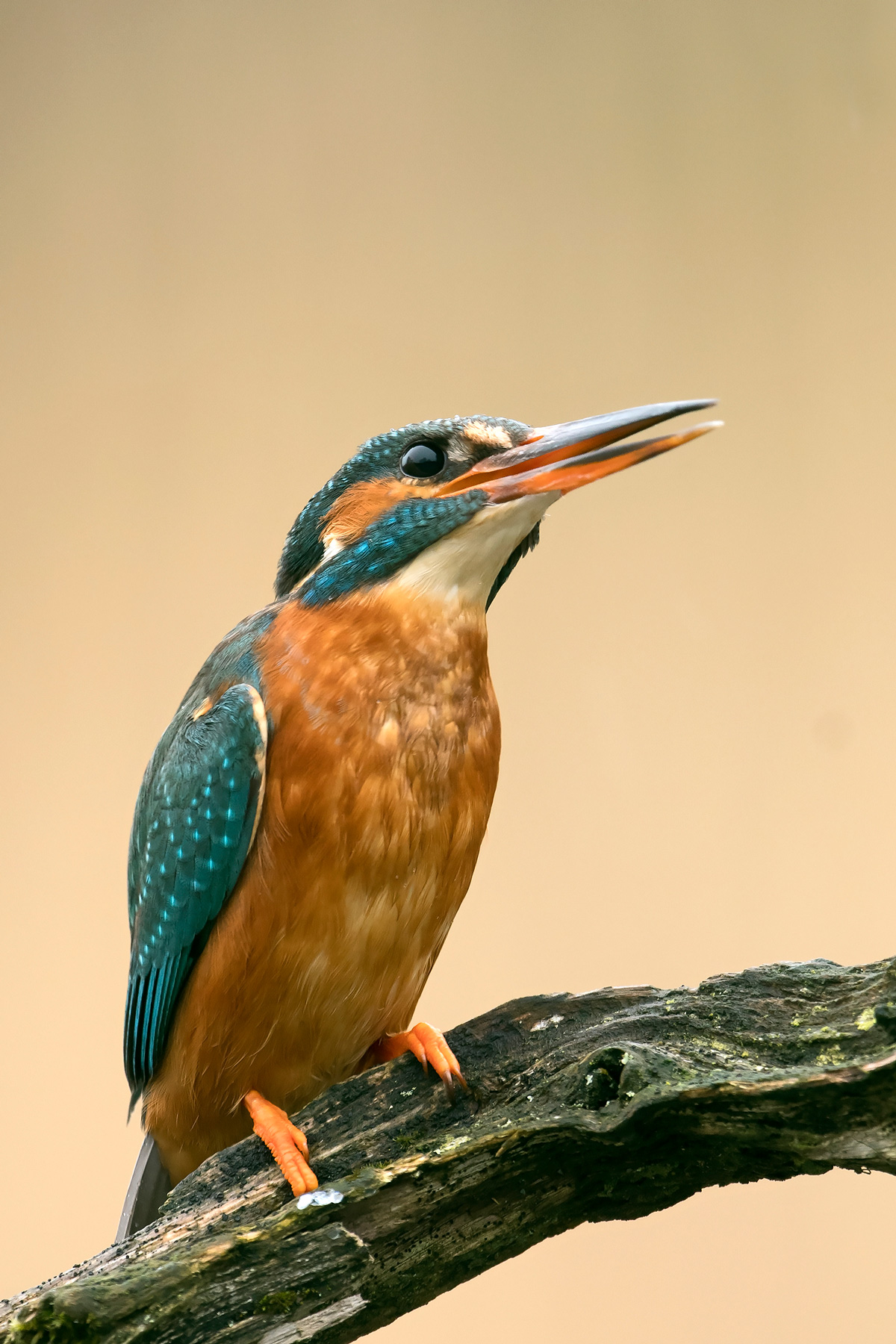 There was a strong wind but the rain was holding off and the light was OK. After the early morning start and a good breakfast I must confess to thinking that a short nap on the bed would be a good idea, but I resisted, made some notes and waited for birds to arrive.

It wasn't long before a Grey Heron flew in and started fishing in the shallow pond; Common Moorhens were regular visitors, and as the hide was at eye level to the water it provided a different angle from which to take some interesting images of this species. A flash of orange shot over the reeds and suddenly there on a perch was a Common Kingfisher. A young female, she looked, dived, caught a fish and flew off – but throughout the day she performed nicely, visiting a number of times.

The wind was howling outside, but we were toasty warm inside and I really wished I'd brought my slippers; that's not something I've ever thought before when on a photography trip! Being able to make a cup of tea during the day was a novel experience in a bird hide, but we did resist cooking, making do with the sandwiches, biscuits and fruit that we'd brought; thoughts of a call to Deliveroo for dinner were dismissed as they wouldn't have found us … 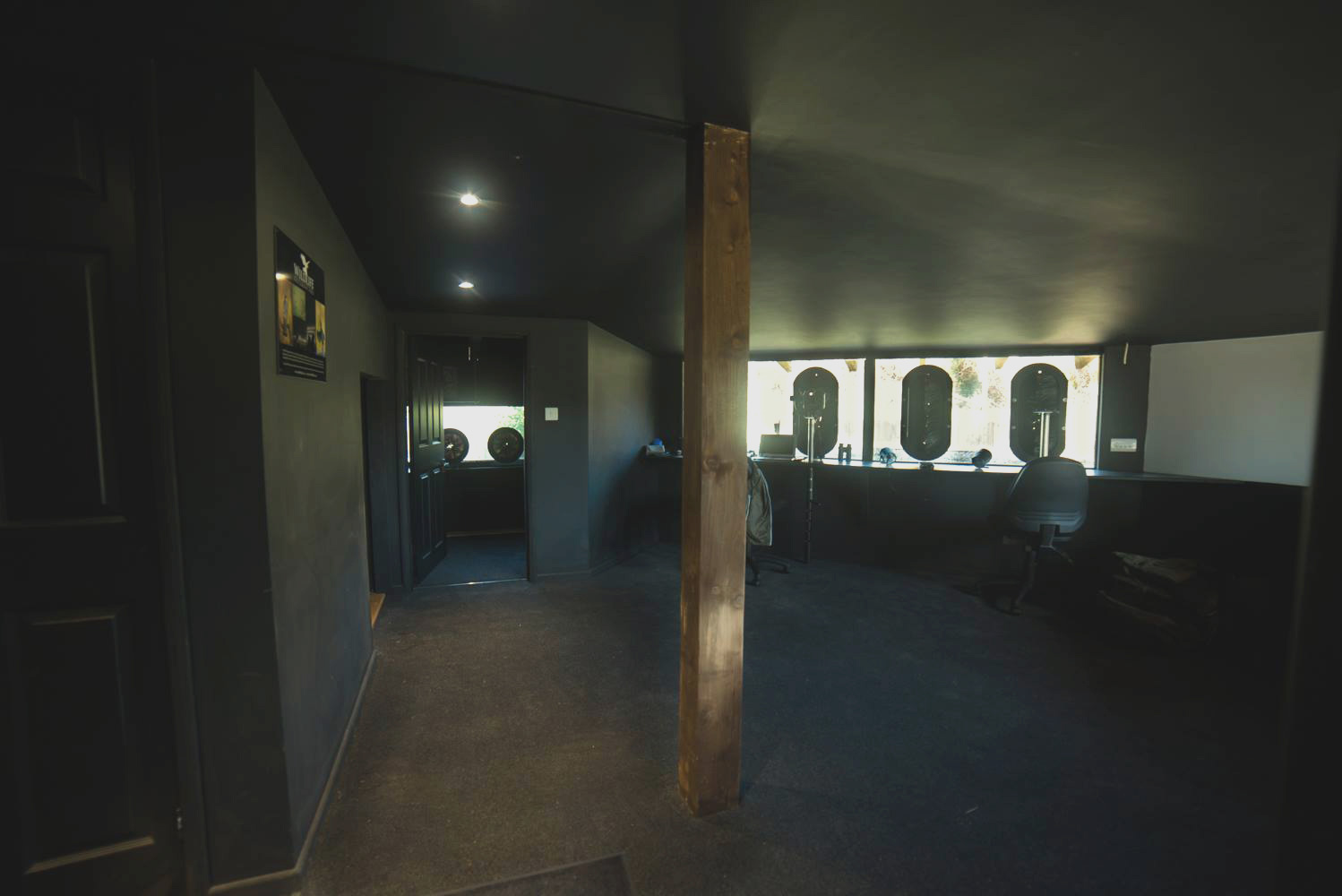 Then it was time for a night session. Tom returned an hour before dark and set up the flash system. Each of our cameras had a radio-controlled unit fitted to the flash plate so that when the shutter was pressed the bulbs fired in unison. This has been tried and tested over the years and the results I've seen have been impressive, but as the weather was worsening with a strengthening wind and rain forecast I wondered what results we might get.

There was a bit of wait and it took a while for the eyes to become accustomed to the darkness, lit only by the odd low-powered light. I almost claimed Otter a number of times, but it was just a movement or ripple in the water caused by the wind. The Tawny Owl came in first at 8.30 pm, landing on a post and not even flinching when the flashes went off, giving fabulous views, before flying away. 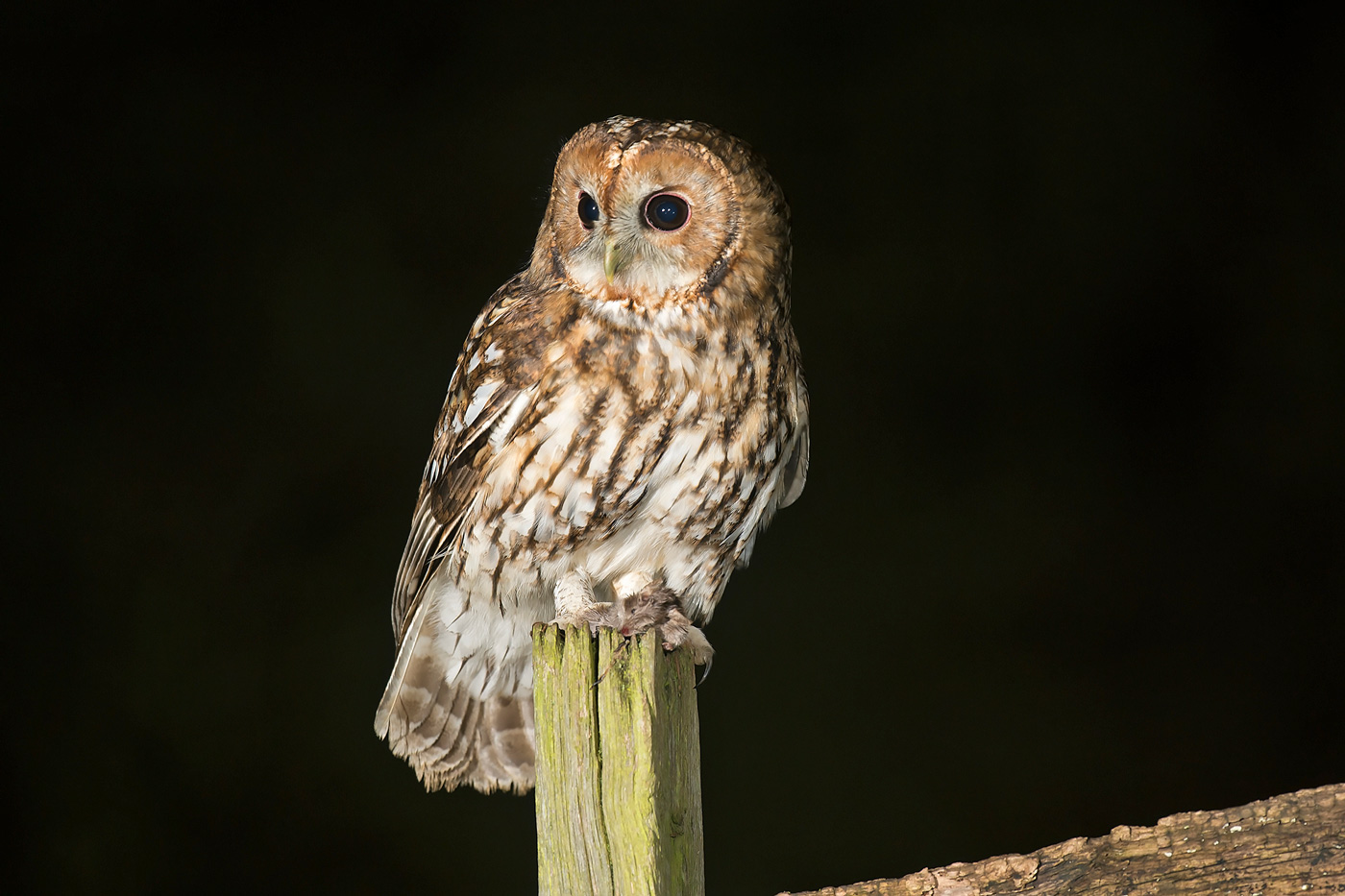 Tawny Owl is one of several nocturnal targets at Tom's hides (Steve Young).

An hour later and the first Otter appeared just as I was making tea; I could hear Chris trying to shout in a strangled voice so as not to be too loud: “Steve! Otter, Otter!”

There it was: an Otter catching the fish bait and splashing around in the water. I found it somewhat tricky to focus on, as the mustelid was in the darkest part of the pond, but as my eyes became more accustomed to the scene the easier it became. Again the Otter showed no reaction to the flash and remained for around 10 minutes, before starting to mooch around, at one point walking underneath our lenses.

We stayed awake until around midnight but the wind steadily became stronger so it was no surprise the owl didn't re-appear. Exhausted, we settled down for the night, very happy with the images we'd taken. 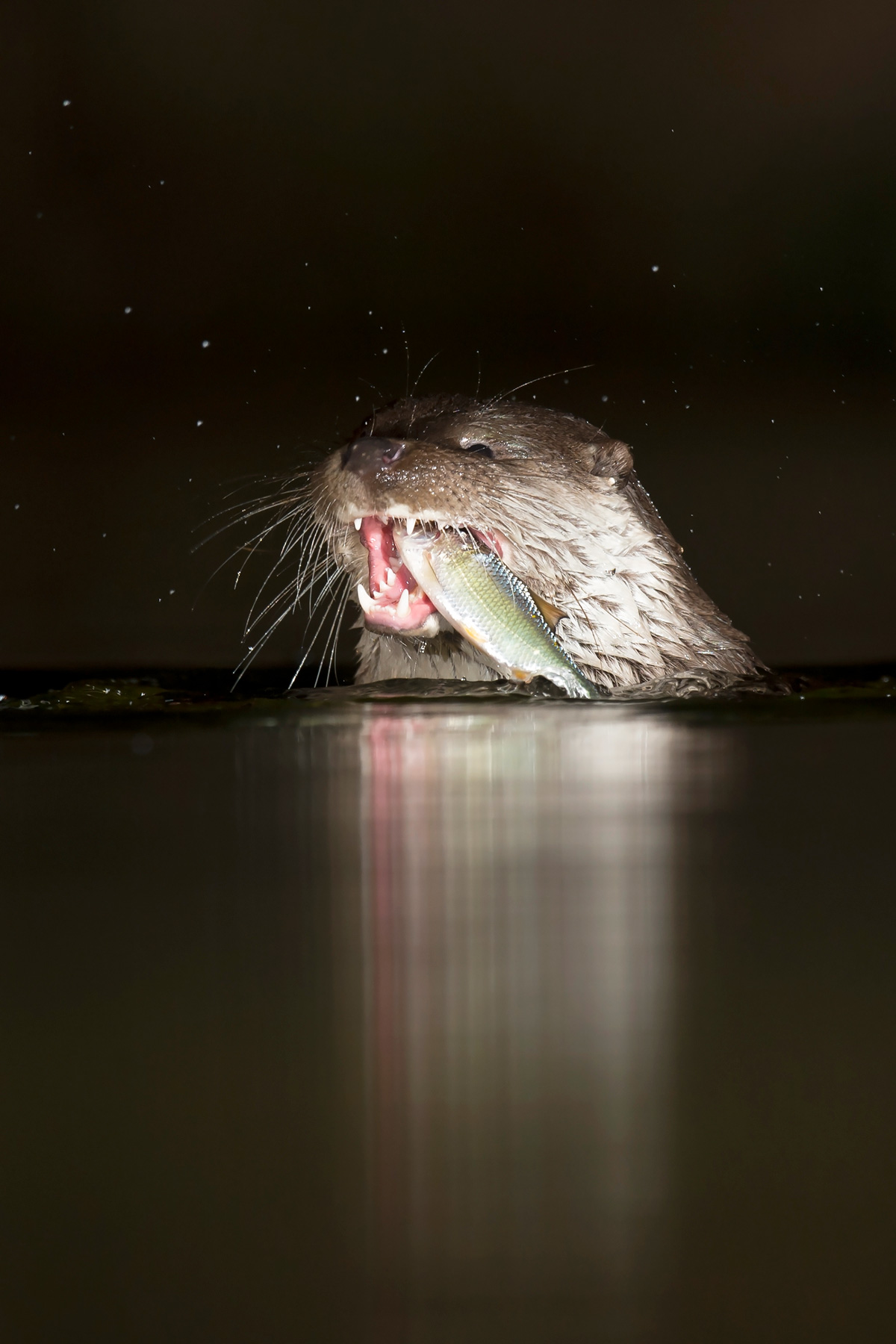 A 10-minute appearance from a confiding Otter allowed for some striking photo opportunities (Steve Young).

It was biscuits and tea for breakfast before we packed up the equipment, ready for Tom to drive us back to the farm and to Dyke Hide. Tripods were necessary here, but again this was a luxury hide, with heater and toilet, but as it's a daytime feeding station hide for woodland birds there was no need for overnight facilities.

The feeding area, complete with perches, was baited with peanuts and mealworms, and we sat and waited. It wasn't long before the first Jays appeared. These were to be a constant presence during the morning, as were the commoner and expected feeding station species, such as Blue Tit, Chaffinch, Blackbird and Eurasian Nuthatch.

I was particularly interested in Green Woodpecker as this is a bird I hadn't photographed before. Sure enough a male flew in within 20 minutes and perched on the log. Many photographs were taken over the next 15 minutes as the woodpecker posed on the branch then dropped down to feed on mealworms, hopping around in the grass – lovely.

Great Spotted Woodpecker also visited, collecting peanuts from the ground then flying to the log to wedge them in a crack before eating them. 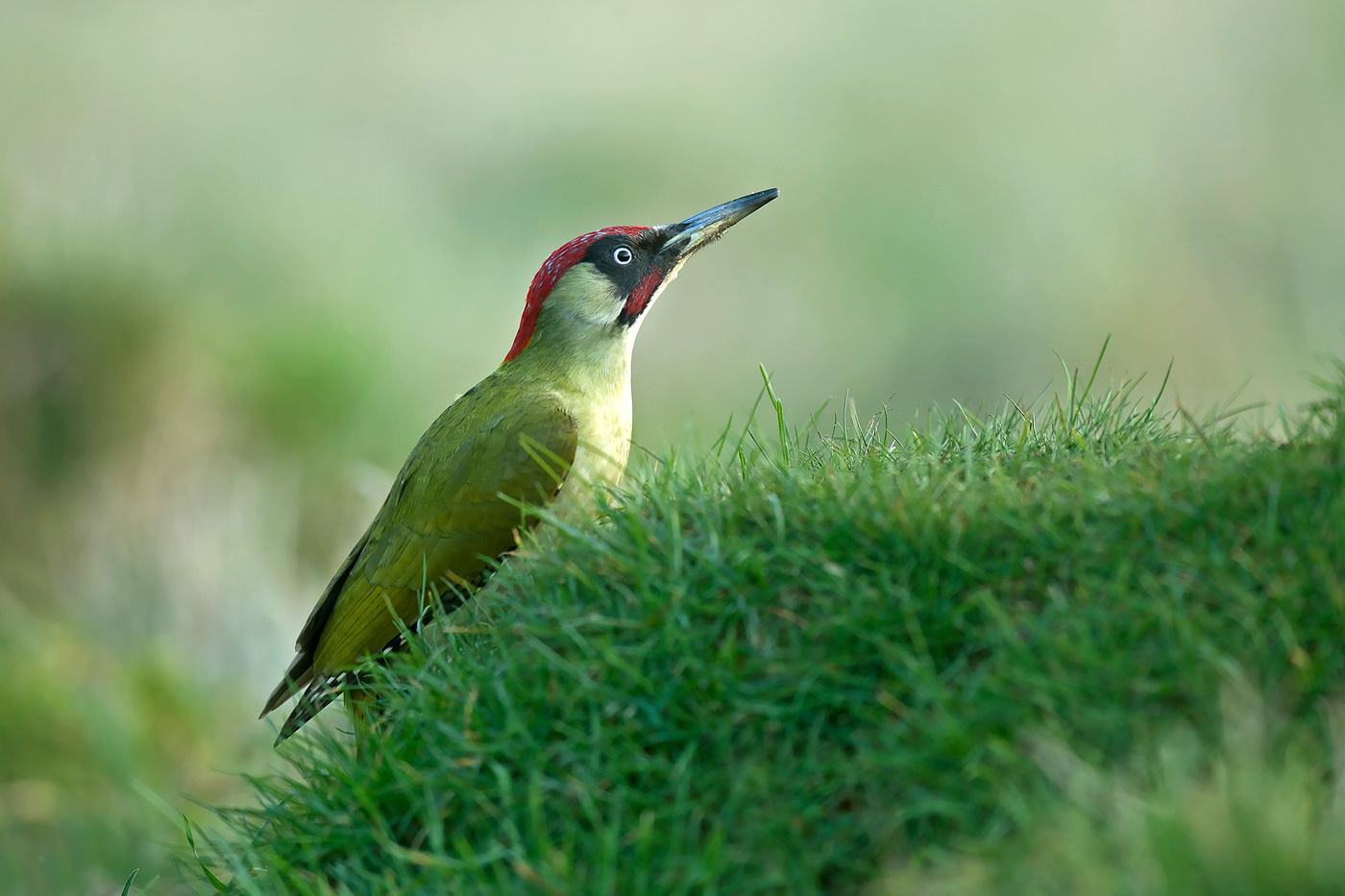 Green Woodpecker was a species Steve hadn't previously photographed, so he was pleased to be afforded this opportunity from Dyke Hide (Steve Young).

Sadly, though, the weather forecast was spot on, and by 11 am rain had set in and 30 minutes later it was pouring down. Wet woodpeckers and Jays were photographed, but they didn't make the best subjects, and we decided to call it a day, texting Tom to collect us from the hide.

It had been a fantastic couple of days. Naturally, I wanted another 10 minutes with the birds, but if I'd had another 10, I'd have wanted another and so on. All the target species had been photographed despite awful weather and poor light so I was happy.

The two hides we used were very impressive (there are two other seasonal ones) and I can only congratulate Tom on all his hard work and effort. The hides are well worth a visit, just remember to take your slippers for that little bit extra comfort!