Illuminating fishing nets with low-cost lights could reduce the terrible impact they have on seabirds and other marine life by more than 85 per cent, new research has shown.

A team of international researchers, led by Dr Jeffrey Mangel from the University of Exeter, has shown the number of birds caught in gillnets can be drastically reduced by attaching green battery-powered light-emitting diodes (LEDs).

Peru's gillnet fleet comprises the largest component of the nation's small-scale fleet and is conservatively estimated to set 100,000 km of nets per year, in which thousands of turtles and seabirds will unintentionally die as bycatch.

For the study, the researchers compared 114 pairs of gillnets – which are anchored in fixed positions at sea and designed to snare fish by the gills – in fishing waters off the coast of Peru. They discovered that the nets fitted with the LEDs caught 85 per cent fewer Guanay Cormorants – a native diving bird that commonly becomes entangled in nets – compared with those without lights.

Each gillnet was typically around 500 metres in length. In each pair, one was illuminated with light-emitting diodes (LEDs) placed every 10 metres along the gillnet floatline. The other net in the pair was the control and not illuminated. The control nets caught 39 cormorants, while the illuminated nets caught just six. 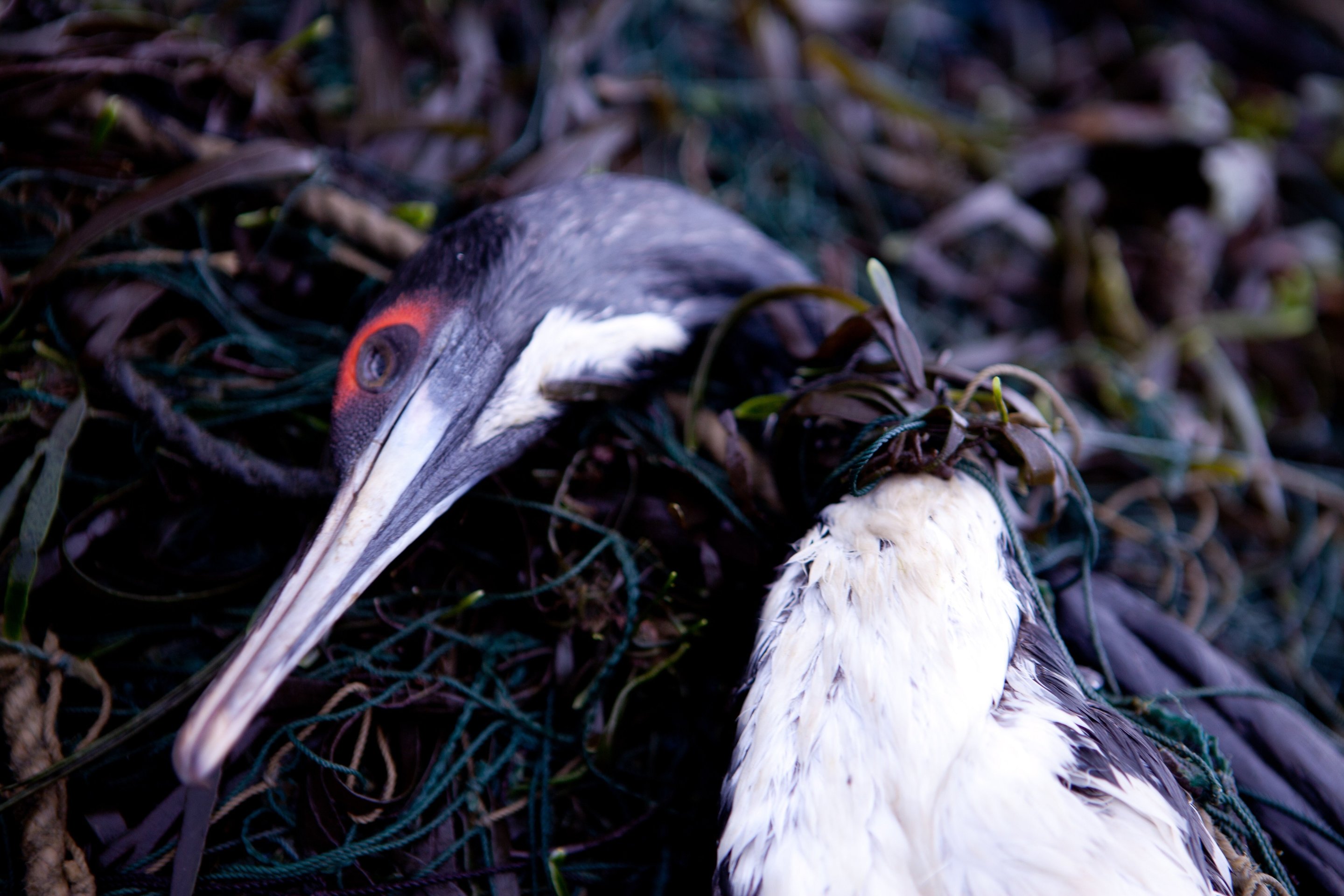 A Guanay Cormorant tangled in a gillnet (Andrew F Johnson).

Coupled with previous research conducted by the same team, which showed that LED lighting also reduced the number of sea turtles caught in fishing nets by 64 per cent, has led the researchers to believe that the lights offer a cheap, reliable and durable way to dramatically reduce the capture and death of birds and turtles, without reducing the intended catch of fish.

For the previous research, the team found that the control nets caught 125 Green Turtles, while illuminated nets caught just 62. The target catch of guitarfish was unaffected by the net illumination. They are now working with larger fisheries in Peru and with different coloured lights to see if the results can be repeated and applied with more critically endangered species.

Lead author Dr Mangel, from the Centre for Ecology and Conservation at the University's Penryn Campus, said: "We are very encouraged by the results from this study. It shows us that we may be able to find cost-effective ways to reduce bycatch of multiple taxa of protected species, and do so while still making it possible for fishers to earn a livelihood."

Professor Brendan Godley, co-author of the study and Marine Strategy Lead for the University of Exeter, added: "It is satisfying to see the work coming from our Exeter Marine PhDs leading to such positive impact in the world. We need to find ways for coastal people to fish with the least impact on the rest of the biodiversity in their seas."