One of the more regular scarce passerines to grace our shores is the ponderous Barred Warbler. Although very rare in spring (just 15 records for this season were noted between 1968 and 1998), they are regular in autumn. Numbers vary on an annual basis, with larger numbers associated with easterly and northerly airflows. An average of 160 birds per year arrived during the 1990s and this had increased to around 200 per annum between 2000 and 2003. The first arrivals tend to occur in early August, with new arrivals steadily increasing throughout August with the peak in the last week of the month and early September. Numbers trail off through September and October. The first birds to make landfall tend to occur on the Northern Isles with birds then being found along the east coast, favoured counties including Yorkshire and Norfolk, before later arrivals filter through to southern and western coastlines. 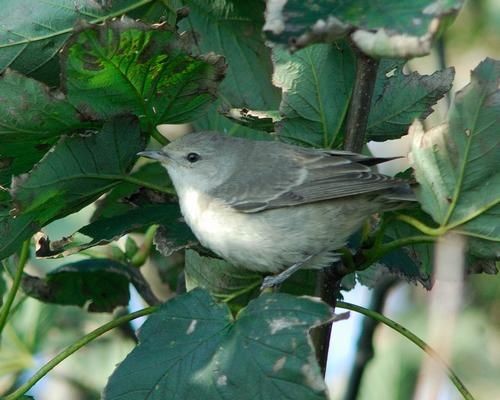 Barred Warbler: Northumberland, October. A typical view of this species, emerging from vegetation. Even on such a brief view alarm bells would be ringing, given the heavy proportions and pale fringed upperparts (Frank Golding). 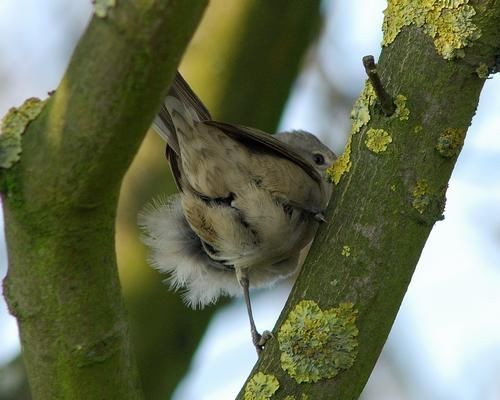 Barred Warbler: Northumberland, October. This portrait illustrates superbly the markings on the undertail coverts. Although variable, such a view would immediately eliminate a Garden Warbler (Frank Golding). 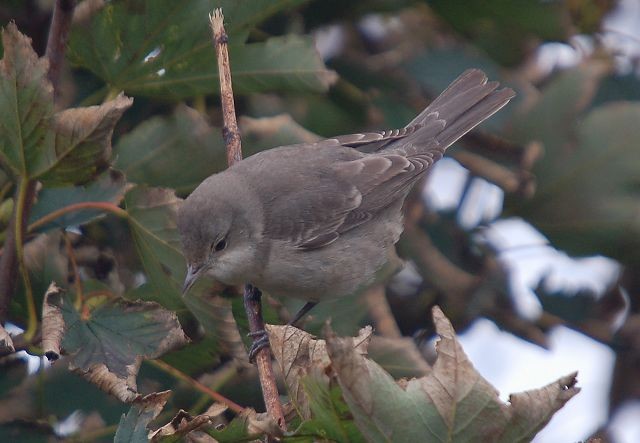 Barred Warbler: Northumberland, October. A nice view in the open, note the pale fringes to the tertials and coverts (Tim Dean). 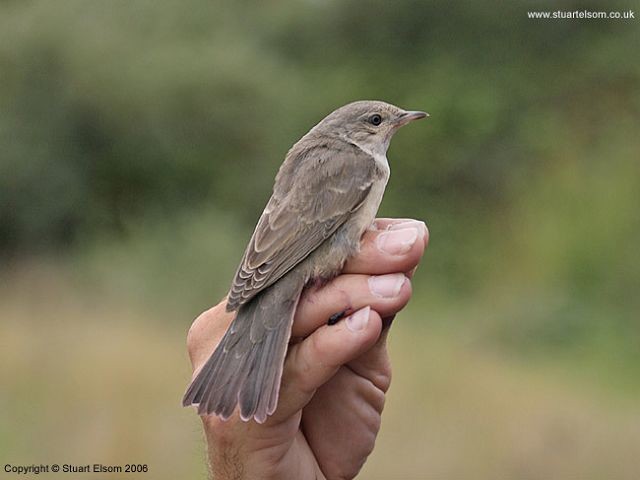 Barred Warbler, Norfolk, August. The easiest way to see a Barred Warbler! Here the long tail of the species can be appreciated, as can the pale outer tail feathers (Stuart Elsom).

Barred Warblers breed across central Europe east to central southern Siberia and northern Mongolia, and south to the Black Sea and southern Kazakhstan. Nominate nisoria occurs in Europe, with another, poorly defined, race merzbacheri in central Asia, though this race is not acknowledged by all authors. The wintering grounds lie in East Africa. Their autumn arrival here has been linked to reverse migration and/or post-breeding dispersal, as records at this time invariably involve birds of the year. The predominantly north-south migration route is thought to account for the paucity of spring records when few are displaced to the west of their intended route back to breeding areas.

For self-finders bashing bushes on the east coast in late August and early September, this species, along with other typical birds of the period such as Wryneck and Red-backed Shrike, is very much on the radar. 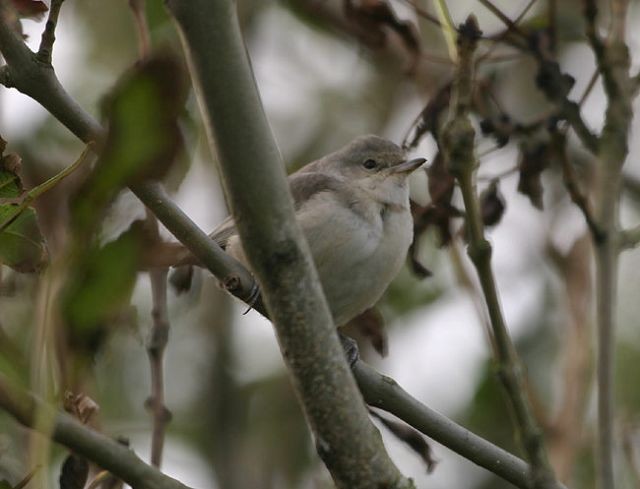 Barred Warbler, East Yorkshire, October. Barred can appear quite pale, especially on a dull autumn day, with whitish underparts. Here the size of the bill is quite apparent, as is the pale base to the lower mandible (Dave Mansell).

Fortunately for those who are not so fortunate to stumble across their own, the species is a frequent enough visitor to our shores to yield quite a few accessible birds during the course of a typical autumn. Indeed, it is not unusual for some to put in protracted stays, often favouring the same bush, or clump of bushes. Where substantial amounts of habitat exist they can be quite elusive, often requiring patience to secure satisfactory views.

Although a distinctive species for those who know it well, migrant Garden Warblers pose a nasty little trap for those who are focused purely on finding scarcities without due consideration for the commoner option. However, with a little knowledge and a bit of a patience and caution, this is a pitfall that should be easily overcome. 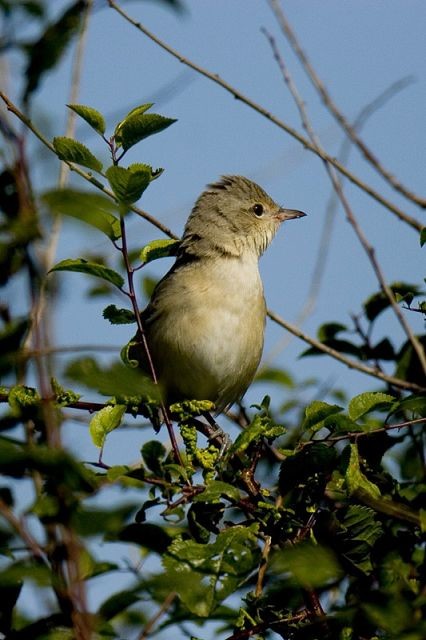 Barred Warbler, East Yorkshire, August. In this image it appears more Garden Warbler-like, but again note the size and colour of the bill, plus the 'scruffy' head which lacks the subtle grey neck-sides of Garden (Susan Paylor). 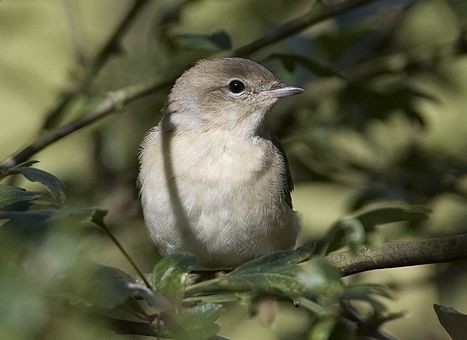 Garden Warbler, Cheshire, August. A bird in similar pose to that above, but note the smaller bill size and colour, lacking the pointed quality of Barred, plus the 'gentle' facial expression and greyish neck-sides (Steve Oakes).

Adults are exceptionally rare, and most observers will find themselves watching a bird of the year that is not barred at all, but a large, rather non-descript Sylvia warbler. The following features can be used to ensure a safe identification before alerting others. 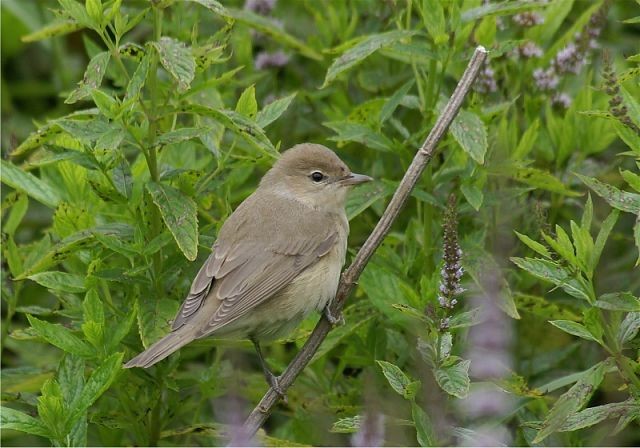 Garden Warbler, Shetland, August. Always a potential pitfall for the unwary, especially one out of context. However, scrutiny of the plumage shows less contrast than would be expected for Barred on the upperparts, a warmer brown coloration and no white in the tail (Mike Pennington). 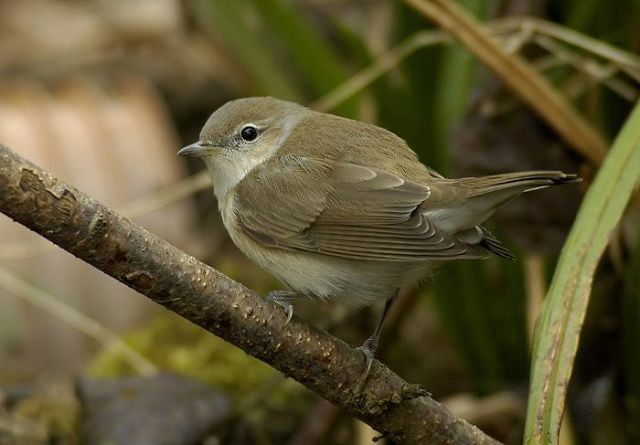 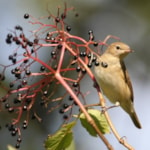 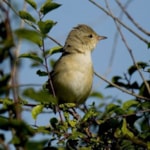