It's mid-January 2013, and it's been a good year for Northern Hawk Owls in Sweden — there are up to 10 birds settled in their wintering territories in Västmanland alone, the area I normally visit for my fix of Scandinavian birding. Although one of my main targets is Hawk Owl there is also a good number of Pine Grosbeaks in southern Sweden to add to the priority target list. It is widely known that birds, especially owls, can be notoriously difficult to find in these northern forests. I've visited the area annually in both winter and spring for the last six or seven years and on this trip I arranged to meet with Daniel Green of BirdSafari Sweden whose in-depth knowledge of the area is an essential requirement of the trip.

A quick check of the Ryanair website for a flight from Stansted to Stockholm Västerås and I had a return ticket including taxes booked for an extremely reasonable £50. After a short journey of two hours we arrived and picked up our hire car from the airport and were pleasantly surprised to have been upgraded to an estate car with nice wide winter tyres. There was a good covering of snow over ice and we were slipping about just loading the camera gear into the car. It wasn't the first time I'd driven on the ice-covered roads, but I set off cautiously, holding up the locals wanting to get home after a day at work. We managed to negotiate the road junctions and it was a bit of a relief when we cleared the outskirts of the town and rush-hour traffic and the sat-nav said only 15 miles to our bed and breakfast accommodation, Edens Gardens at Lake Hälljsö in the heart of the Black River valley, which would be our primary birding area for the next six days. 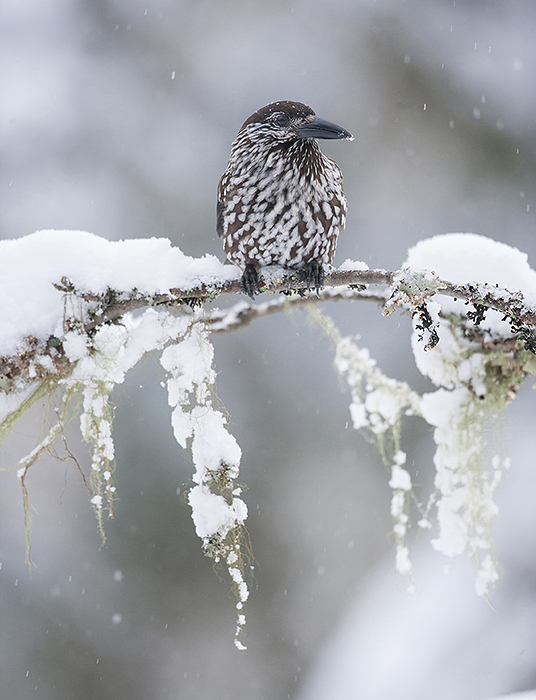 Our first morning there was fresh snowfall and we decided to try our luck with the Lake Hälljsö beavers. We had a quick check in the usual area but deep snow made following the shoreline really difficult. After about 20 minutes we decided to give up as we were wasting valuable birding time. The forest was eerily silent with the only sign of birdlife a calling Great Spotted Woodpecker during the trek back to our accommodation. Our first birding target was Daniel's Nutcracker feeding station. On the way we scanned the open meadows and clearings for mammals: Moose, Roe Deer and Wild Boar, which are really common; Wolves, which have also been seen regularly in the area; and Lynx, which are around but notoriously hard to find. We didn't see any predators but spotted a couple of Roe Deer en route. As we arrived at the feeding station near Lake Fläckebo we disturbed a few Hooded Crows, then as we approached we could see activity: there were Blue Tits and Great Tits feeding on hanging fat. Then we spotted a couple of Nutcrackers as we entered the trees. These were my main photographic target, and we saw around six or seven individuals. We also saw a Grey-headed Woodpecker, lots of Willow Tits, Nuthatches of the Scandinavian pale-breasted form, several Common Treecreepers, several Great Spotted Woodpeckers, and a couple of Crested Tits in addition to the throngs of Blue and Great Tits.

After a couple of hours, the –15°C temperatures eventually got the better of us and we decided on a change of scenery. We decided to try for a resident Hawk Owl about five miles away on the other side of the lake. We drove up and down the owl's clearing, scanning the tree tops, but could not find the owl. It was early afternoon by this time, so we decided to visit a Great Grey Owl breeding site that we knew of; the owls are rarely seen during the winter but we decided it was worth a punt. When we arrived at the clearing we spotted a Roe Deer but no sign of any Great Grey Owls. We decided to check a few nearby clearings and had a lucky break: there was a tiny Pygmy Owl perched in a spruce tree about 100m from us. It suddenly flew straight towards us and dived into the tree behind us; we were not sure whether he captured his prey but we heard a couple of Willow Tits scolding him.

The light was fading fast by this time so we decided to head back to our accommodation. We drove along the forest track for about 15 miles and suddenly, as it was almost dark, we spotted the familiar shape of a hunting Great Grey Owl sitting on a small spruce tree in a forest clearing right next to the road. An unexpected bonus, but it was a shame it was so dark as the owl just sat there a few feet away totally ignoring us. I managed a few record shots at ridiculously slow shutter speed. What a day; we'd had a fantastic day even though we dipped on the Hawk Owl.

Day Two and we met up with Daniel Green who would be our guide for the day. We first started by looking for another Hawk Owl, which had been seen in a large clearing a few times previously. There was no sign of it but a howling canine could be heard, which was thought may have been a Wolf. We pressed on for a few more miles and arrived at a stand of non-native spruce trees where a group of Pine Grosbeaks had been seen a week or so earlier. After a scan of the tree tops the upstanding cones appeared to be all but gone, with just the spine of the cones remaining. We were just beginning to think we were going to dip on grosbeaks when Daniel picked them up on call as half a dozen flew virtually over our heads and headed over the forest a few hundred metres away. Luckily we have seen grosbeaks on several occasions in Scandinavia so we decided to look for another wintering Hawk Owl that had been seen regularly a few miles away. We had a quick warming tea from the flask and then it was on to our next target.

On arrival, the Hawk Owl was sitting on a spruce on the clearing edge and made a few prospective dives into the deep snow before landing in a birch tree over the road. We also saw a Great Grey Shrike and a Black Woodpecker before we decided to visit a feeding station back in Västerås. We were not disappointed, as there were three Hawfinches present on our arrival. We spent an hour sitting in the cold watching the birds nervously coming to the feeders; we saw lots of common species including at least a dozen Northern Bullfinches and about eight Hawfinches.

On Day Three we were scheduled to spend a day in Daniel's eagle photography hide. We had an early start to make sure we were in the hide well before daylight so that the eagles did not suspect our presence. The drive through the dark forest along raised snow-covered forest tracks to the hide location was a little scary at times, but to our relief we arrived without any incident. The car temperature sensor was also showing –18°C at this point! Besides two Golden Eagles we saw Black Woodpecker, Great Grey Shrike and a dozen tits including several Willow Tits, which were attracted to a feeder close to the hide. We achieved our goal and managed to photograph a Golden Eagle feeding on a dead Red Fox about 30m from the hide.

On Day Four we had decided to drive up to a regular site for Siberian Jay, about two and a half hours to the north, which meant another early start. We arrived shortly after daybreak but a couple of Swedish film-makers had beaten us there. They were filming and had already began to attract the jays with their favourite food: sausages. Unfortunately they had placed a ridiculous number of sausages on all the suitable perches within the forest. This really meant we had made a wasted trip, as the opportunity to get good shots on some nice perches in good light on the outside of the forest was lost. We also saw at least two Grey-headed Woodpeckers, Nuthatches, Treecreepers, Crested Tits and Willow Tits, and several Great Spotted Woodpeckers. On the way back we paid a visit to a wood where a Great Grey Owl had been seen on the previous day, but we had no luck, although not having exact directions didn't help our cause.

Day Five was our final day; we had to leave for the airport mid-afternoon so we were a little pressed for time but keen to get some more photographs onto our memory cards. The weather seemed to be improving: the sky was beginning to clear and sunshine looked to be a good possibility. We decided to pay the Nutcracker feeding station a visit in better light. We saw the same species as on our first visit, but managed to achieve some slightly better photographs of the Nutcrackers because of the improved light levels. The clock was ticking so by mid-morning we decided to finish with another visit to the nearby Hawk Owl on the other side of Lake Fläckebo. This time we were in luck and we watched him hunting for a couple of hours. The owl was moving several hundred metres between hunting perches every ten minutes or so, which meant it led us a merry dance for quite some time until finally it gave itself up and came down onto a relatively low juniper bush. This allowed us to get some shots below the skyline rather than the 'looking up at' shots that are the usual for this species. We ended our trip pretty happy with ourselves having seen all of the species we were hoping to see and knew our 5pm flight would mean we would be back home in the UK in front of the telly by 9pm that evening. This area of Sweden makes for a fantastic birding trip: there is the chance of seeing virtually all of the species that can be seen elsewhere in Scandinavia but it is much more accessible and cheaper to get to. If you want to visit the area please contact Daniel Green of BirdSafari Sweden or myself for more information.