Hybridisation between Pallid and Common Swifts revealed in DNA study

The separation of Pallid and Common Swifts is a familiar identification challenge to birders in Europe, but the question of hybrids and the pitfall they might present has never been an issue, with only one published case of a mixed pair in Switzerland. However, researchers have now shown that hybrids and backcrosses are found far and wide, having just been overlooked in the past.

Common Swift breeds from western Europe and North Africa eastwards across the Palearctic to China, while Pallid Swift is a largely Mediterranean species, with most of its range overlapping with Common Swift. The two species are thought to have diverged about 2 million years ago, probably after the species were pushed in different directions by the Last Glacial Maximum, with Pallid becoming the warm climate species. Since the retreat of the ice sheets, the two species have expanded their range and met again, a familiar scenario in a number of Northern Hemisphere bird species.

Although some Common Swifts use natural nest sites in trees and cliffs, and Pallid Swift colonies on cliff-faces are not unusual, both species have routinely nested in human dwellings for hundreds of years, sometimes side-by-side. It seems that the opportunities given by humans have brought the species into even closer contact after range expansion. Ornithologists performed DNA analyses on Common and Pallid Swifts nesting in the town of Bastia, Corsica, and compared the results to those from single-species colonies in order to better understand the influence of urban environments on hybridisation and genetic introgression in similar cavity-nesting species. Pallid Swifts were pushed to the Mediterranean during the Last Glacial Maximum, while Common Swifts were probably sought refuge in East Siberia (Matthew Mellor).

Common and Pallid Swifts have nested in buildings in Bastia since the 1930s. Samples were also taken from another Corsican site in the Cerbicale Islands, where only Pallid Swifts breed, as well as from Common Swift colonies in France and Switzerland. From the total of 488 birds (308 Commons and 108 Pallids), the researchers aimed to detect any hybridisation, and whether it has occurred over a long-term, or is a more recent phenomenon.

They performed mitochondrial DNA sequencing and microsatellite genotyping to run hybrid estimation analyses. Six birds identified as Pallid Swifts based on their appearance turned out to have Common Swift mitochondrial DNA. Five of these were in the mixed colonies of Bastia, but the other was on the Cerbicale Islands, away from breeding Common Swifts. Interestingly, there were no such mismatches in any birds identified as Common Swifts during the research. The study revealed widespread gene flow between the two swifts. However, Pallid Swifts showed more mixed DNA than Commons. There were both late-generation hybrids, their mixed ancestry perhaps linked to shifts in range during the most recent glaciation, and birds which were direct, first-generation hybrids. 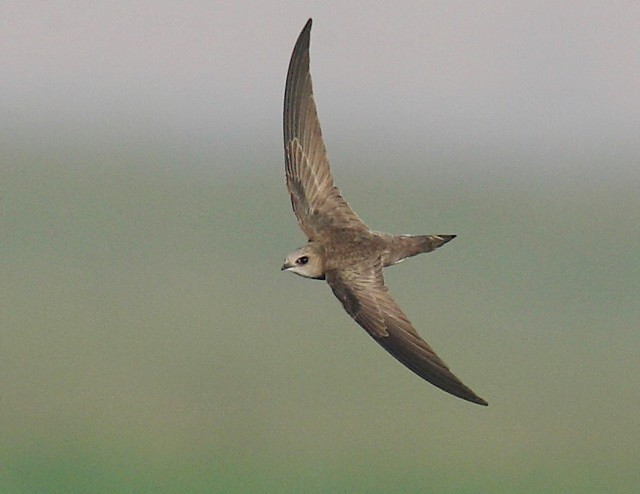 Pallid Swift is identified by its paler, scalier plumage, darker outer primaries and 'saddle', and blunter wingtip, but hybrids were indistinguishable (John A Thompson).

Work on the birds sampled at the Mediterranean sites showed that just 28.5% of birds with mixed heritage were first-generation hybrids, most of these in Bastia (but one in the Pallid Swift colony in the Cerbicales), with the others having mixed ancestry related to hybridisation further back in the birds' ancestry. Most of the first-generation hybrids were identified as Pallid Swifts by appearance.

Despite the evidence of mixed ancestry, the study reaffirmed the species status of the two swifts, with the majority of individuals being identifiable to species through DNA analysis.

The researchers concluded that mixed ancestry was widespread and caused by hybrids produced at mixed colonies dispersing to breed at single-species sites elsewhere in Europe. They suggested that the lack of observations of mixed pairs in the literature may mean that hybrids result from copulations outside of the pair, which would be hard to observe. Common Swift may be less prone to gene introgression due to its larger population and stronger site fidelity (Richard Mills).

Due to the close similiarity between the two species, it is unlikely that any hybrid would be detectable without DNA analysis. There stronger introgression of Common Swift DNA into Pallid Swift may be explained in part by the former being the more abundant bird, with greater genetic diversity, meaning any occasional Pallid Swift genetic material is quickly 'diluted'. Additionally, Pallid Swifts often produce two broods a year, giving more opportunities for mixed offspring than Common Swifts, which tend to only have a single clutch, while Pallids are also more prone to dispersal.

As the two species have not mixed even further, despite overlapping range and similar behaviour, but there are clearly factors maintaining the separation of the two species. The most obvious potential answer is vocalisations, which are distinguishable to the human ear and probably help the birds select a mate of the same species, with the call of Pallid Swift sounding markedly disyballic compared to Common, but a full explanation for what is keeping the species separated will require further investigation.