How to see Lesser Spotted Woodpeckers 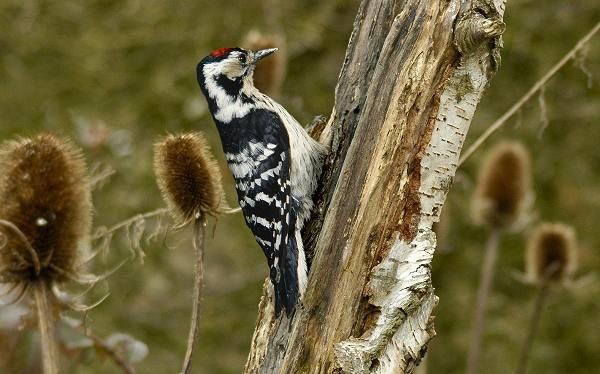 Lesser Spotted Woodpecker: Worcs Apart from their tiny size, they are easily recognisable because the upperparts are crossed with numerous narrow white bars instead of big white patches. The male has a red crown, whilst the female has no red on her head (photo: John Robinson).

For many the diminutive, secretive, and easily overlooked Lesser Spotted Woodpecker remains their 'bogey bird'. Few of us can claim to be familiar with the smallest, and least common, of the three woodpeckers that are resident in Britain. As most will testify, this can prove to be an exceptionally difficult species to catch up with.

In world terms, Lesser Spotted Woodpeckers can be found from western Europe and north Africa eastwards to the Pacific coast. The European breeding population is put at 450,000-1,100,000 pairs, with an estimated 2,700-5,400 pairs in Britain. In Britain they are sparsely distributed and their range peters out just into Northumberland and Cumbria. British birds are of the endemic race comminutus; so far there as been no evidence of immigration from the continent involving birds of the nominate race minor, but it remains a possibility. 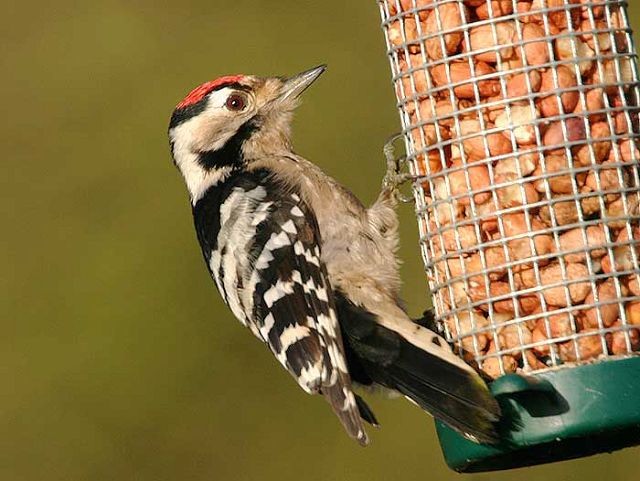 Lesser Spotted Woodpecker: Warks One of Europe's most elusive birds, despite being present in every country except Iceland, Ireland and Scotland (photo: Steve Seal).


The status of this delightful species is presently one of dramatic decline, thought to be linked to the clearance of dead elms and changes in the management of our woodlands. It is now considered to be of high conservation concern and plummeting numbers have led to its placement on the 'Red List'. Numbers on English CBC plots declined by 61% between 1967 and 1999. 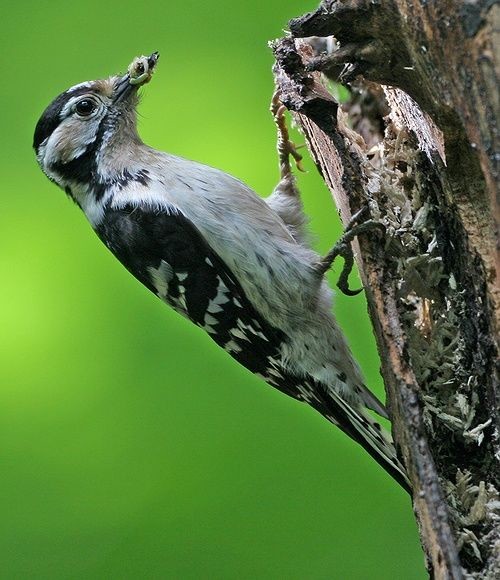 Lesser Spotted Woodpecker: W. Yorks The population of Lesser Spotted Woodpeckers has declined seriously leading to their inclusion on the Red List. This decline may be caused by the removal of rotting trees from our woodland and the loss of many elms to Dutch Elm Disease. They may also have declined due to increased competition from other species (photo: Sean Gray).

So, against a backdrop of declining numbers, and a species that seems to disappear into thin air, just how do you go about tracking them down? If you can mange to find one, not only have you the personal pleasure of seeing the species but you can also contribute towards mapping its present distribution. However, seeing a Lesser Spotted Woodpecker is not that easy; how can you maximize your chances?

The first step in the finding process is to pinpoint potentially suitable habitat. Breeding takes place in broad-leaved woodland, parks and orchards. There is a requirement for decaying wood for nest sites, as a new nest chamber is made each year. You're wasting your time in coniferous woods, and also in certain parts of Britain (and Ireland) where they simply don't occur! Do some research though: check out old bird reports for your local area, use the search facility on Bird News Extra, ask local birders for advice, or simply go looking for deciduous woodland with plenty of old trees in it.

The second step is to be out searching for them at 'the right time of year'. The best time to try and see Lesser Spotted Woodpeckers is in late winter and early spring (January to April) when the trees are bare and the woodpeckers are becoming territorial, betraying their presence by their distinctive call and drumming. Of course it is possible to see this tricky species at other times of the year, especially in autumn and winter when you may just chance upon one consorting with a tit flock, but you're certainly cutting the odds by searching during this peak period of activity in early spring.

Before you step foot in the field in your quest to 'nail' this bogey of 'bogey birds' be sure to learn both the distinctive calls and drumming of the 'Lesser pecker'. Both differ from Great Spotted Woodpecker and believe me it's far easier to be tuned into the distinctive sounds rather than spending hours scanning the tree-tops. From now onwards Lesser Spotteds are becoming quite conspicuous, increasing to a peak of activity in March and April, but with all the mild weather on offer this winter things might be happening a tad earlier than usual. 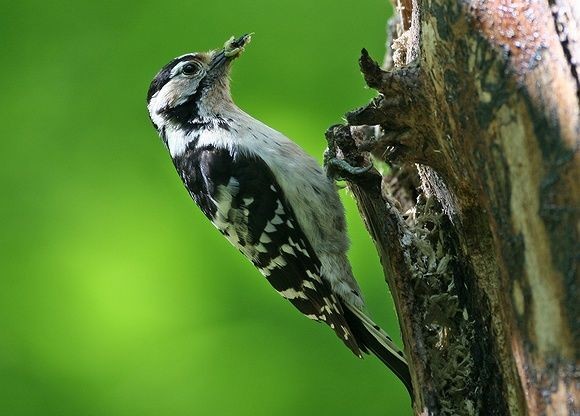 Lesser Spotted Woodpecker: W. Yorks Be sure to learn both the distinctive calls and drumming of this small woodpecker, which differs from its larger relative the Great Spotted Woodpecker. The peak time for hearing birds is from late winter to early spring, after which they can be very tricky indeed (photo: Sean Gray).

The overwhelming majority of Lesser Spotteds that I've managed to see at this time of year have been through either hearing the drumming or the call, both of which can be audible some way off. With a little bit of prior research, you don't have to tramp for hours on end around the wood, you can let the woodpecker do the hard work for you! Needless to say, try to get out early in the day. Those mild, and still, early spring mornings are the best: not only does the sound carry better, but the birds are more active too. Once you think you've got your quarry within earshot, hone in on the sound and look for a likely-looking dead tree. More often than not Lesser Spotteds will be on the outer branches of the tree, but keep your eyes peeled for the deep undulating flight between trees as they slink away. 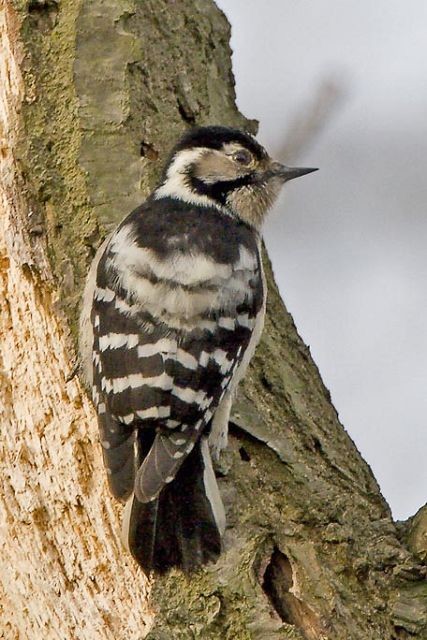 Lesser Spotted Woodpecker: Cheshire 'Ladderbacks' can be hard work, but the reward is certainly worth the effort! (photo: Steve Fletcher).

Even if you don't have an ear for bird sounds, an alternative approach is to simply follow up every drumming woodpecker that you hear - in suitable areas the law of averages imply that you are bound to get lucky once in a while.

Once this slot of peak activity has passed, Lesser Spotteds can be exceptionally difficult to see at other times of the year. They do associate with tit flocks in winter, but you can spend a lot of time looking through an awful lot of flocks before you get lucky, even in areas in which you know they are to be found. As spring develops the trees become bedecked with foliage, so once again birds become more difficult. There have been a number of reports recently of birds using garden feeders, a nice development, especially if one is in your back garden, but don't rely upon such good fortune to fill that gap!

Lesser Spotted Woodpecker: Warks If you're lucky enough to know of one visiting a feeding station it can save you a lot of effort 'out in the field', but where's the fun in that! (photo: Steve Seal).