Oriental Honey Buzzards often raid apiaries for honey and bee larvae, but they also detect the bees' winter pollen supply by smell and colour, and eat that too.

Oriental (or Crested) Honey Buzzard, a widespread Asian raptor closely related to the familiar European Honey Buzzard – is likely to use a combination of sense of smell and sight to identify nutritious 'pollen dough' balls found in Taiwanese beehives, according to a recent study published in the open-access journal PLOS ONE. 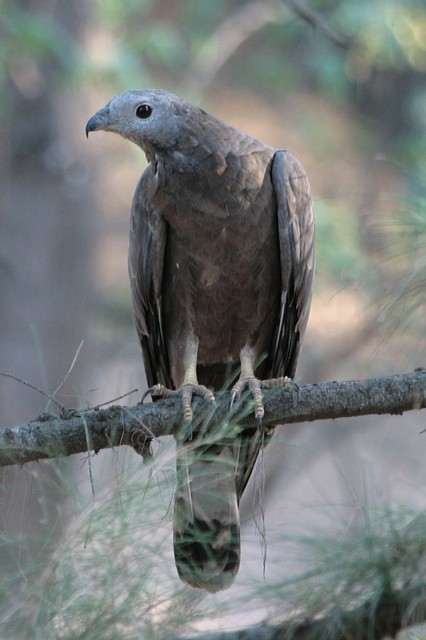 Scientists are aware that birds of prey may use their sense of smell to detect food, but so far this has only been demonstrated in Turkey Vulture, an American scavenging species. Oriental Honey Buzzards in Taiwan regularly forage in apiaries for yellow pollen dough, a tennis ball-sized mixture of pollen, soybeans and sugar which beekeepers provide as a supplementary food for their colonial bees. Since pollen dough is not similar to any naturally occurring food, the authors of the study investigated whether the buzzards identify the dough’s nutritious contents using their sense of smell, perhaps in combination with vision.

The authors of the study used a series of experiments where individual birds could choose between two doughs that varied in pollen content or colour to test whether the birds use the scent of the pollen to find their food and whether the food colour influences their preference.

The authors found that buzzards almost always chose dough with pollen over dough without pollen, when the dough was otherwise identical in size, shape and yellow colour. Vision also seemed to play a role in foraging, as the buzzards preferred yellow over black or green dough if both contained pollen.

In addition, the honey buzzards still preferred dough with pollen when both doughs were black, but at a lower rate than when both were yellow. The authors suggest that the birds likely identify the dough using their sense of smell in combination with their vision. The authors conclude that olfaction is likely of far greater ecological importance to this species than previously thought, and should be considered when studying their behaviour.

Crested Honey Buzzards prey on many species of bee and wasp, raiding their communal nests for grubs and honey. They are seemingly immune from the stings of even the largest hornets, and have been seen to feed on nests in trees by hanging upside down. The birds are known to habitually hang around apiaries waiting to eat grubs and honey left behind by beekeepers, but despite their propensity for the pollen dough balls, they are a protected species and are not generally viewed as a pest species in Taiwan or elsewhere.