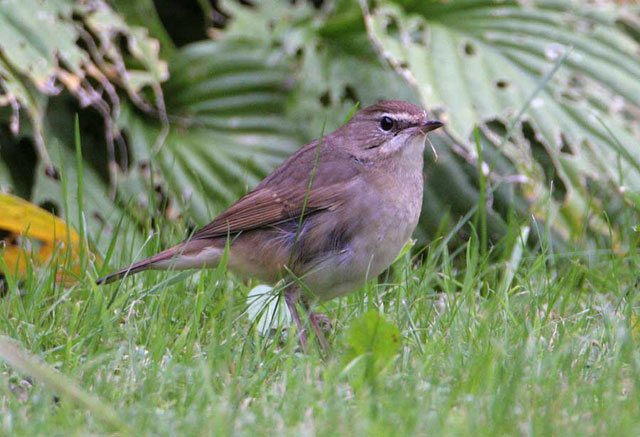 Siberian Rubythroat: Sunderland, Durham Still a 'mega'. The first was in 1975 and the only one for the mainland was available for a day in 1997. There have been 3 on Shetland in past 5 years, so we should now expect more, and a long-stayer on the mainland. A welcome change in status (photo: Ian Fisher).

A week after two Alpine Swifts had graced Sunderland's Roker sea front area several of Wearside's most experienced birders were back, searching for a considerably more remarkable prize.

That morning news had broken that a Siberian Rubythroat had spent at least part of the day before in "a private garden with no access" in the city. Already the local grapevine was buzzing with rumours that suggested the location was on the north side of the river and close to the coast. There was talk of the rarity being in an enclosed garden along a terraced street. One likely spot seemed to be the vicinity of the Roker Hotel so we went on patrol, hoping some resident would notice us, rush out of a house and invite us inside to view their distinguished feathered visitor.

We were, of course, wasting our time. As more information came to light, it became apparent the first-winter female had not been seen since darkness fell the previous evening. However, it took several more days before the complete story emerged — that it had resided over October 26th–28th on the back lawn of a house in Edgeworth Crescent, a modest cul-de-sac off Fulwell Road, just a few hundred yards further inland. The most frustrating discovery, however, was that it was only by a strange twist of circumstances that this had not become public knowledge on at least the last of those days.

How close a lot of birders had come to viewing a species recorded only once before in mainland Britain was realised for the first time on November 4th when there was a surprise visitor as Tom "Tucker" Mooney, an ex-miner, and his friend, Walter Moss, a retired shipyard worker, seawatched from Whitburn Observatory, two miles up the coast. The caller, Michael Williams, who knew Tucker, through also having worked at Wearmouth Colliery before its closure in the early 1990s, left them speechless with the news that the Rubythroat had spent virtually all of its three-day visit in his garden.

It turned out that Mr Williams and his sons, Paul and Adam, had been aware an unfamiliar bird was frequenting the lawn, but they were unsure of its identity. By the third day, Saturday October 28th, they remained uncertain, so Mr Williams decided to seek the opinion of the only birder known to him — Tucker. This led to him going to Boldon Flats, a local nature reserve on the city's northern outskirts, where his former workmate is often to be found. It was a good guess for Tucker and Walter did indeed call at the wetland that morning, but the timing was wrong. They left a matter of minutes before his arrival.

Instead Mr Williams consulted the only birders who were present — crucially from well outside the area. They were from Edinburgh, though originally, it seems, from Essex and were actually on their way to see their favourite football team, Southend, play at Leeds that afternoon. The week-long presence of an American Wigeon at Boldon Flats had led them to make a diversion — which was about to prove incredibly more lucky than they could have imagined as they headed south. However, the Rubythroat's identity was not that strikingly obvious and they felt the need for more expert opinion.

As it happens there is no shortage of experienced birders living fairly close to Mr Williams' home. Several of them had seen Britain's only other mainland Rubythroat at Osmington Mills, Dorset, in October 1997 or the first-winter female that spent three days on Fair Isle in October, 2003. Some had wider knowledge of the species through encounters in its south-east Asian winter territory. However, the two Southend supporters had no immediately local contacts. The call that was made, purely because of a chance meeting on Fair Isle earlier in the month, went to Ian Fisher, the official bird recorder for the next-door county, Northumberland.

The day before Mr Williams related events to Tucker and Walter at Whitburn Observatory I phoned Ian after learning, through the local grapevine, that he had seen and photographed the Rubythroat. He told me of how he would have preferred to have circulated details of its location on the day but the householder had asked him not to do so because of concerns about the likely appearance of numerous birders in their quiet cul-de-sac.

"I tried to arrange for others see it, pointing out a considerable sum could be raised for charity by everyone who came to the house being asked to make a donation, but they were adamant they couldn't cope with crowds", he explained. "It placed me in a very difficult situation. One of the birding basics is that if you see a great bird you spread the word. I have not even been able to tell my best friends about this yet — and I dread their reaction when they hear about this. It was just pure chance that I was invited to give an opinion on the bird — and once I'd seen it was a Rubythroat I had to agree to keep the location secret."

My natural curiosity as a journalist made me want to find out more, so as a result of Mr Williams "going public" at Whitburn Observatory next day, I called at his home on November 6th. He said the possible implications of having such a rarity outside their kitchen window hadn't really occurred to him and his wife Rosemary. until the arrival of the two Southend supporters, Ian Fisher and another birder called Keith, who came with him. Mention was made by at least one of them that this was the sort of bird that thousands of people would want to see. Fearing their neighbours might be upset by such a gathering, they did indeed ask for no publicity — a request that was honoured.

Since then I have become aware of criticism being levelled because details of the Rubythroat and its location were not announced before its disappearance during the clear night that followed the last sighting at about 6pm on October 28th. All I will say here is that those involved in the decision-making process felt that — under the circumstances — this was the correct course. No-one deserves criticism for making what at they time they genuinely believed to be a right decision, especially from individuals who were not present and therefore can't be sure that — under identical circumstances — they would not have made exactly the same decision.

My only thought is that in other circumstances — and it was only by a slight quirk of fate, or whatever one might call it, that this didn't happen — the Rubythroat could have had a much wider audience. It was something of a Sliding Doors situation — which, for anyone who hasn't seen the movie, means that one simple event can have two possible outcomes. In this case the simple event was Mr Williams' visit to Boldon Flats to try to tell his old mining workmate, Tucker, about the bird. If he had succeeded, Tucker and his friend Walter, fellow "Mackems" to the core, would have been the birders who were brought back to Edgeworth Crescent — and that, I feel sure, would have led to a different scenario. 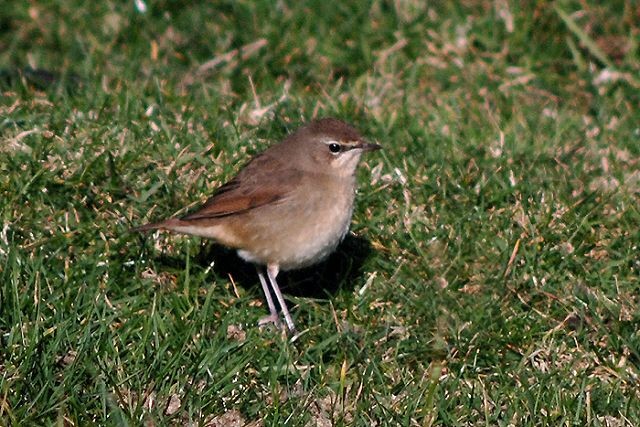 When Tucker and Walter saw one of Ian Fisher's photographs of the Rubythroat they doubted whether, due to their comparative inexperience, they could have identified it. Therefore they would have had to alert others in the area better able to do so — and because of the close-knit nature of the local birding community, word would have spread quickly. By early afternoon, possibly sooner, the news would have been circulating nationally and, with the bird showing until dusk, and with appropriate access arrangements, there would have been potential for a lot of people to have enjoyed it.

Tucker and Walter are convinced Mr Williams would have agreed to access if they had been able to ask him that Saturday morning. To avoid possible crowd problems in the cul-de-sac, a sort of shuttle service could have been operated, with maybe no more than six at a time going to see the Rubythroat. Walter, Tucker and other local birders would have happily volunteered to marshall the procedure. Waiting birders could have assembled in the open area, with car parking space, beside Redby Community Centre off nearby Fulwell Road. The Cambridge pub, the local fish and chippie and other corner shops, all within 200 yards of the cul-de-sac entrance, might well have benefited from a boost in their trade.

The presence of even a few hundred birders for a few hours ought not to have been a problem for this generally heavily built-up neighbourhood. Up to 1997 it was accustomed to much vaster crowds — and not always of such a peaceful nature — because of Sunderland AFC's former Roker Park ground less than a quarter of a mile from Mr Williams' garden. Of course, there is no way of being sure what would have happened if the news had been allowed to break. However, from my knowledge of the area and the people who would have stepped in to run the show, the alternative outcome could have been achieved without acrimony.