Help with year three of the Bird Atlas

We are now halfway through this important four-year project and we've collected over 1.7 million Roving Records, over 1.9 million records from BirdTrack and made over 104,000 timed counts in tetrads. It's a remarkable achievement by volunteers. Despite these impressive figures there are still some gaps on distribution maps for common winter species such as Blackbird, Meadow Pipit and Wren. These tend to be gaps in coverage rather than no Blackbirds or Wrens, perhaps with the exception of a few 10-km squares on the top of mountains. 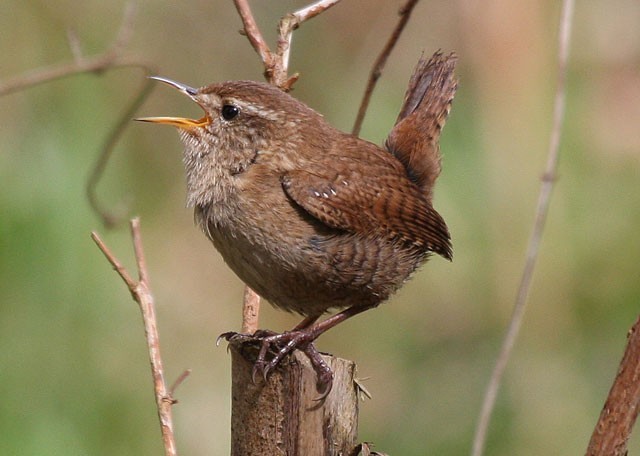 We've made excellent progress in two years of fieldwork and across much of England we are close to achieving our minimum target of Timed Tetrad Visits and expected species richness. Further fieldwork over the next year will put us in a fantastic position for the final year. There are a few areas where extra help is still needed, such as the Isles of Scilly, East Yorkshire, Lincolnshire, Dorset — can you help? Although we may be close to achieving the targets of the national atlas in England, there are over 30 local atlas projects underway that are all aiming for complete coverage of every tetrad (2 × 2 km square) in the county — e.g., Suffolk, Kent, Gloucestershire, Northumberland, Sussex and Shropshire — and they all need help in achieving their goals.

There is still much to do in Scotland, Wales, the Isle of Man, the Channel Islands and Ireland, and we need extra help in these areas. Short birding trips to these areas over the winter could make a significant difference to the coverage, especially in Ireland where there are some 10-km squares that have not been visited at all in two years! The Regional Maps, accessed under 'Headlines' on the Atlas website, will help you target your efforts — look at the winter species richness maps to see which 10-km squares in your region need help. Just a couple of hours' birding will make such a difference.

During the Winter Atlas of 1981/84, Little Egret was recorded in just one 10-km square (in HY44, Orkney) and Great White Egret was recorded in two 10-km squares (TA21 in North Lincolnshire, TA22 in Humberside) and conceivably just one Great White Egret was involved in the two records! Just look at the spread of Little Egrets in winter now! The numbers of Great White Egrets recorded has also increased in the last few years and we are keen to record their distribution in the Bird Atlas. The map below shows where they have been recorded so far from November-February 2007/08 and 2008/09 and since 1st November 2009. Can you help fill in any dots? 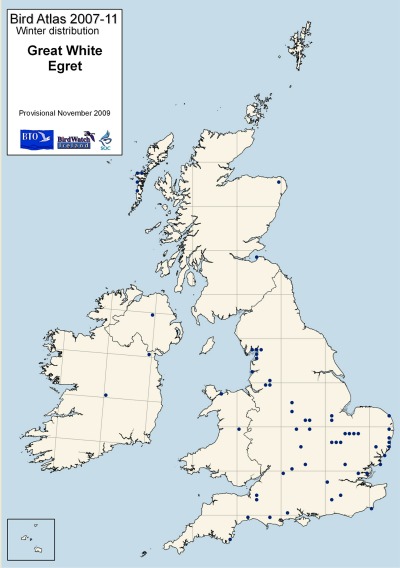 Another species increasing its range northwards is the Barn Owl (see map below). Comparison with the last Winter Atlas shows many more records in the north of Scotland now, especially north of Inverness. Elsewhere in Britain, following a large decline in numbers and range, the Barn Owl is starting to re-establish itself in many areas, thanks to the efforts of local conservationists erecting nest boxes and better habitat management. The Barn Owl remains scarce in Ireland and so far we have very few records from Northern Ireland — have they been lost here or under-recorded? 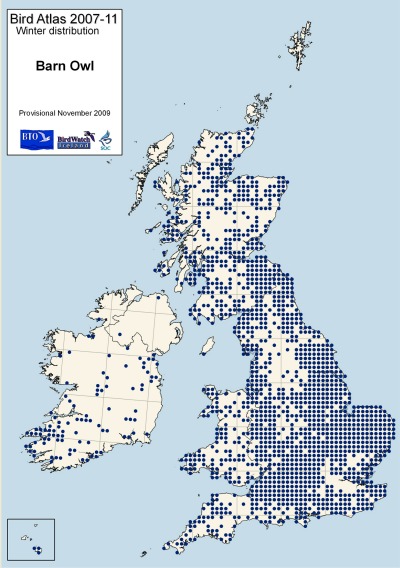 If you are able to help out over the winter then please consider taking on a tetrad or two for timed counts (minimum requirement two one-hour visits per tetrad) or if you can't commit to that level of fieldwork then casual records from your birdwatching could fill important gaps in species distributions.