Named for the white patch on the forehead, both Greater and Lesser White-fronted Geese occur in Britain in winter. The former can be seen around British and Irish coasts in relatively good numbers during the colder months, while the latter is now very rare and finding one is a real challenge. Separating these similar geese is an ID challenge, and to add to this, two subspecies of Greater are found in Britain – Russian and Greenland. Andy Stoddart provides all the information you need to identify these sought-after geese in all plumages. 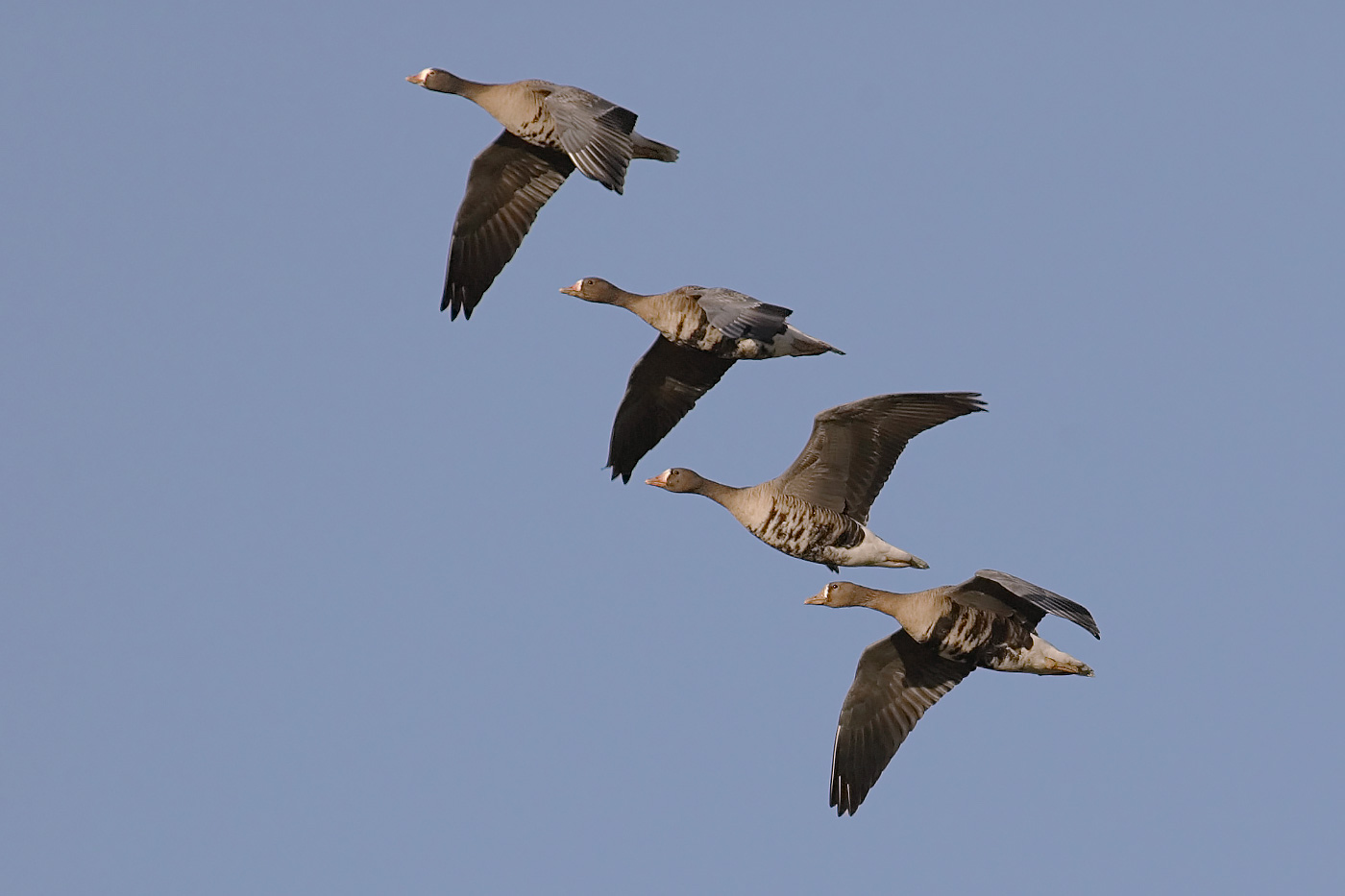 Lesser and Greater White-fronted Geese (Strijen, The Netherlands, 14 December 2005). This wonderful image captures beautifully the two species of white-fronted goose together. The Lesser White-fronted Goose (top) looks only a little smaller here, but its short, small bill, short neck and rather rounded head profile are more obvious. Also visible are the Lesser’s bold yellow eyering and extensive white forehead patch which extends onto the fore-crown. The belly barring is also typically rather weak (Hans Gebuis / www.agami.nl).

Although sometimes termed 'European' or 'Eurasian' White-fronted Goose, the breeding range of this form extends across northern Russia. Eastern populations winter in East Asia, mainly in China, Japan and Korea, with those from central Siberia wintering in Europe, largely in The Netherlands, south-east Europe and around the Black and Caspian Seas.

In Britain this goose winters in southern England, particularly in East Anglia, but occasional influxes from the large wintering Dutch population can see birds turn up more widely. This subspecies favours wet grassland rather than stubble or sugar beet fields and – although not an inviolate rule – tends to remain in single-species flocks rather than mixing with other geese.

This is a medium-to-large goose with a relatively square-looking head and a rather short, triangular bill. Adult Russian White-fronts have a small white 'front' (actually the forehead) and highly variable black belly barring.

Juveniles and early first-winter birds (the white 'front' and black belly markings are acquired during the first winter) lack these features and identification hinges on those characters common to all ages – medium grey-brown plumage with little tonal contrast between the neck and body, darkish feathering around the bill base, a slightly paler face, a pink bill (although the true colour can be difficult to discern in some lights), no apparent eyering, a dark grey tail broadly tipped with white, and orange legs and feet.

Young birds which lack the white front and belly barring need to be distinguished with care from Pink-footed, both bean and Greylag Geese.

In flight, the white-fronted geese lack the prominent pale grey forewing of Pink-footed and Greylag Geese and the upperwing therefore appears darker and more uniform. The call is a high-pitched lyo-lyok, with a musical or laughing quality.

This subspecies is quite distinct from all other white-fronted geese and has been proposed as a species in its own right. It has a relatively small population (around 24,000 birds), breeds in west Greenland and winters mainly in Ireland and on Islay, Argyll. Away from these traditional sites, it is a rare bird, but can sometimes be found in flocks of Pink-footed Geese. In winter it favours wet moorland and tussocky grassland, in which it disperses in small family groups rather than assembling in large flocks.

It resembles its Russian counterpart, but is slightly larger with a heavier bill and a longer, thicker neck; it averages darker brown overall. The belly barring on adults is also highly variable in its extent but can be more extensive, with some birds having almost wholly black bellies.

The white tip to the tail is narrower than on Russian birds but, most importantly, the bill is carrot-orange and therefore matches the legs (although the pink bills of Eurasian birds can appear orange in some lights and clear views are required to be sure of the colour).

The call resembles that of Russian White-front.

This species is monotypic and confined to the Palearctic. It breeds from northern Scandinavia eastwards across Siberia. Eastern birds winter mainly in eastern China, while western birds head south-west to Europe. Eastern Hungary and around the Black and Caspian Seas are traditional destinations, with birds wintering among the vast flocks of Russian White-fronts there.

It is, however, very rare throughout its range, and particularly in the west, with a world population of only around 28,000-33,000 birds. It is declining steadily and is a Red-listed Species of Conservation Concern. In recent years the Scandinavian population has become almost extirpated and has been augmented by reintroduction schemes, birds from which winter at traditional sites in The Netherlands.

In Britain this species used to be an annual vagrant, mainly among Russian White-fronts at Slimbridge, Gloucestershire, but also in the Yare Valley, Norfolk, among Taiga Bean Geese. Occurrences at these sites have now ceased, however, and today this species is an extreme rarity in Britain, with any future individuals most likely deriving from Scandinavian/Dutch reintroduction activity.

This is a small, compact goose, smaller than Greater White-front and often picked out on this feature alone. It differs structurally too, having a particularly small, short bill, a rather oval, 'high-crowned' head with a steep forehead, a short neck (another good feature at long range), short legs and relatively long wings which project well beyond the tail-tip. Lesser White-fronts feed actively and may move more rapidly through flocks of larger geese, thereby aiding their detection.

Adults resemble Russian White-fronts in their basic plumage hues and bare parts colours, but are a little darker overall and have a more extensive white front which extends higher on the forehead and can reach the mid-crown. This can be surprisingly hard to judge on a head-on view, but is perhaps easier to evaluate from the side. Adults also have, on average, less extensive belly barring. The other important feature common to all ages is a neat yellow eyering.

The call resembles that of Greater White-front, but is even higher pitched. 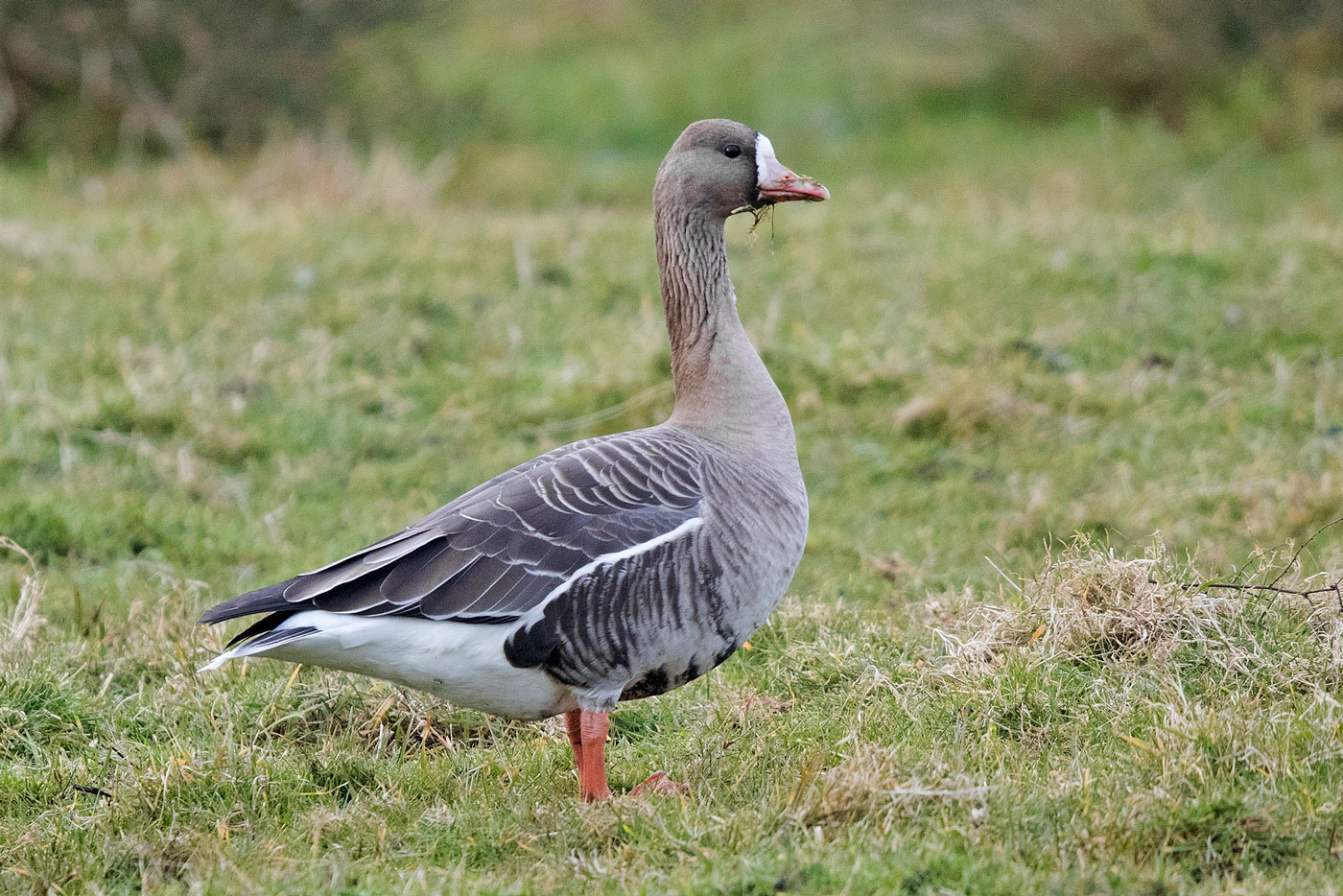 Russian White-fronted Goose (North Warren RSPB, Aldeburgh, Suffolk, 23 February 2018). Russian White-fronted Geese are rather unexceptional in their structure, but note the rather long neck, square-looking head and medium-length triangular bill. The plumage is typically a rather pale grey-brown with no appreciable darkening on the head and neck. The restricted white forehead is plain enough here, but note also the line of darker feathering which separates it from the rest of the face, and the lack of any yellow eyering. The belly barring is highly variable and is rather weak on this individual. Finally, note also the rather broad white tip to the tail (Andrew Moon). 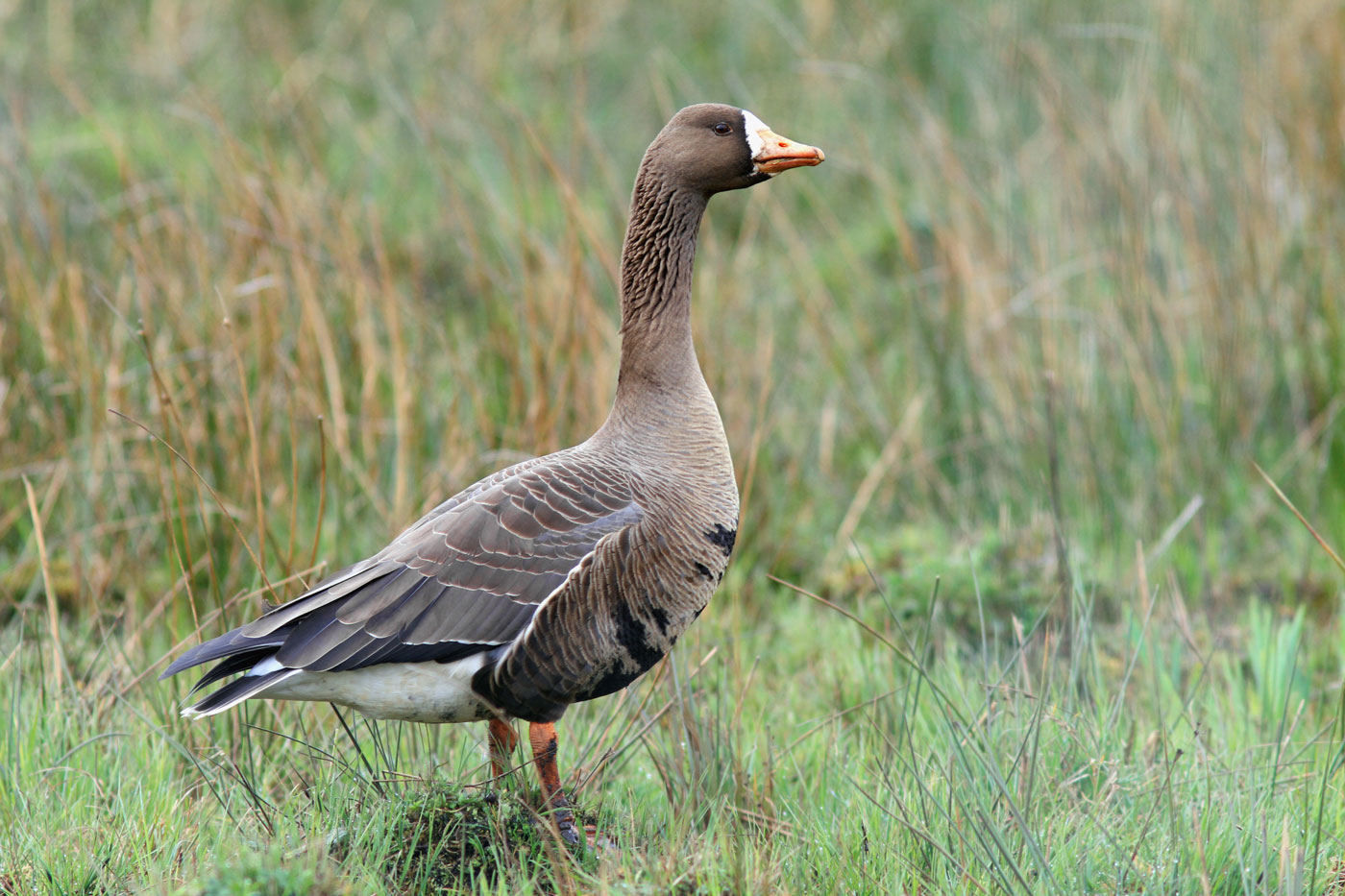 Greenland White-fronted Goose (Islay, Argyll, 17 April 2014). Although on its own, this Greenland White-fronted Goose still manages to look quite big and long necked, as well as rather dark, more earth-brown than its Russian counterpart. Most features are shared between the two subspecies, but note here the rather heavy and bright orange bill which matches the colour of the legs. In addition, the white tip to the tail is noticeably narrow (Pete Morris / www.agami.nl). 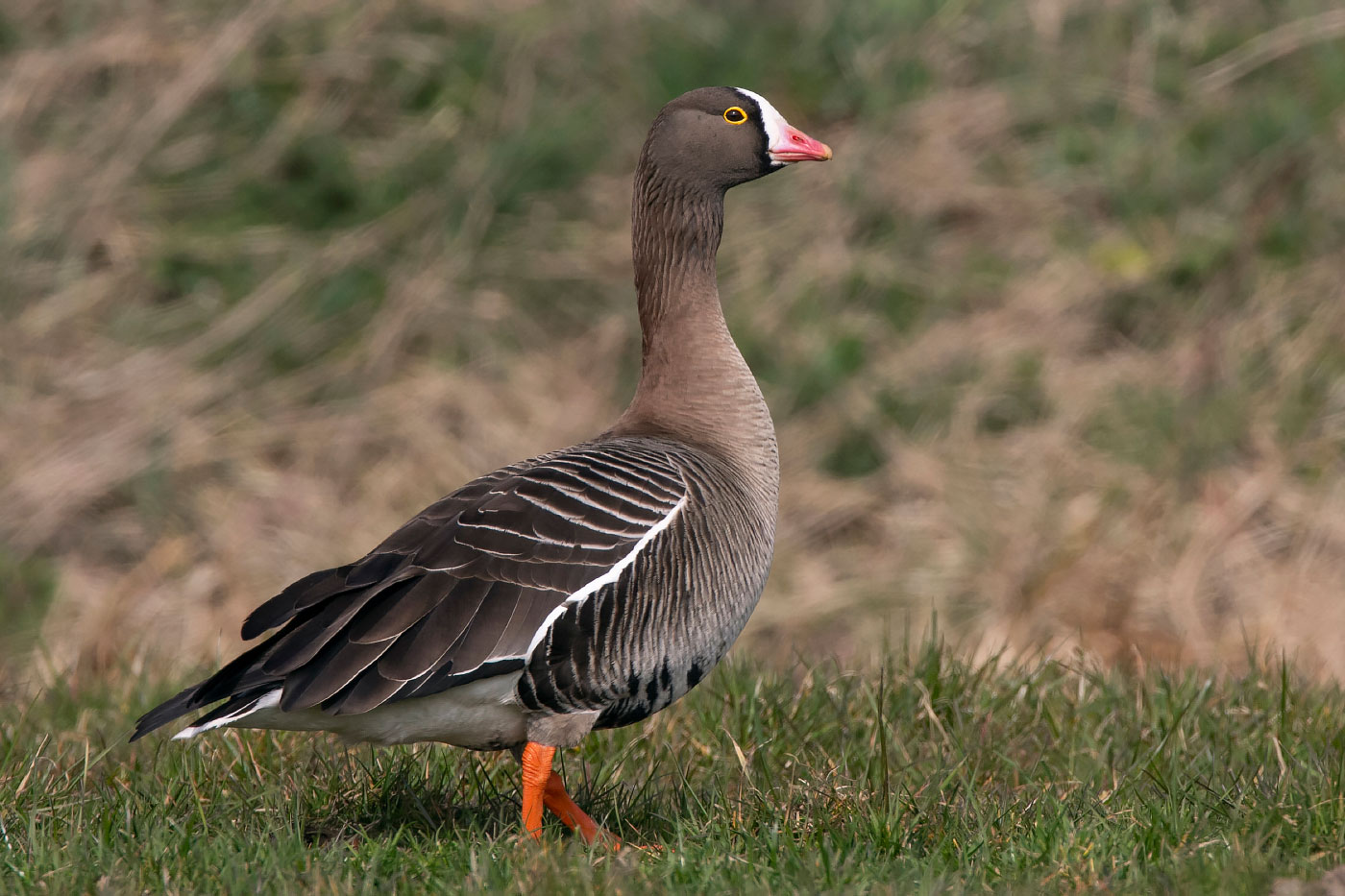 Lesser White-fronted Goose (Zwolle, The Netherlands, 18 March 2015). Lesser White-fronted is a small, delicate and compact goose, with long wings, short legs and neck, a high, rounded crown, slightly 'fat-looking' cheeks when viewed head on, and a short, rather petite bill. Even more striking on such a close view are the two key identification features: a bold bright yellow eyering and an extensive white forehead which extends onto the fore-crown. The belly barring is typically weak in this individual, while the head and neck are slightly darker than the body (Edwin Winkel / www.agami.nl). 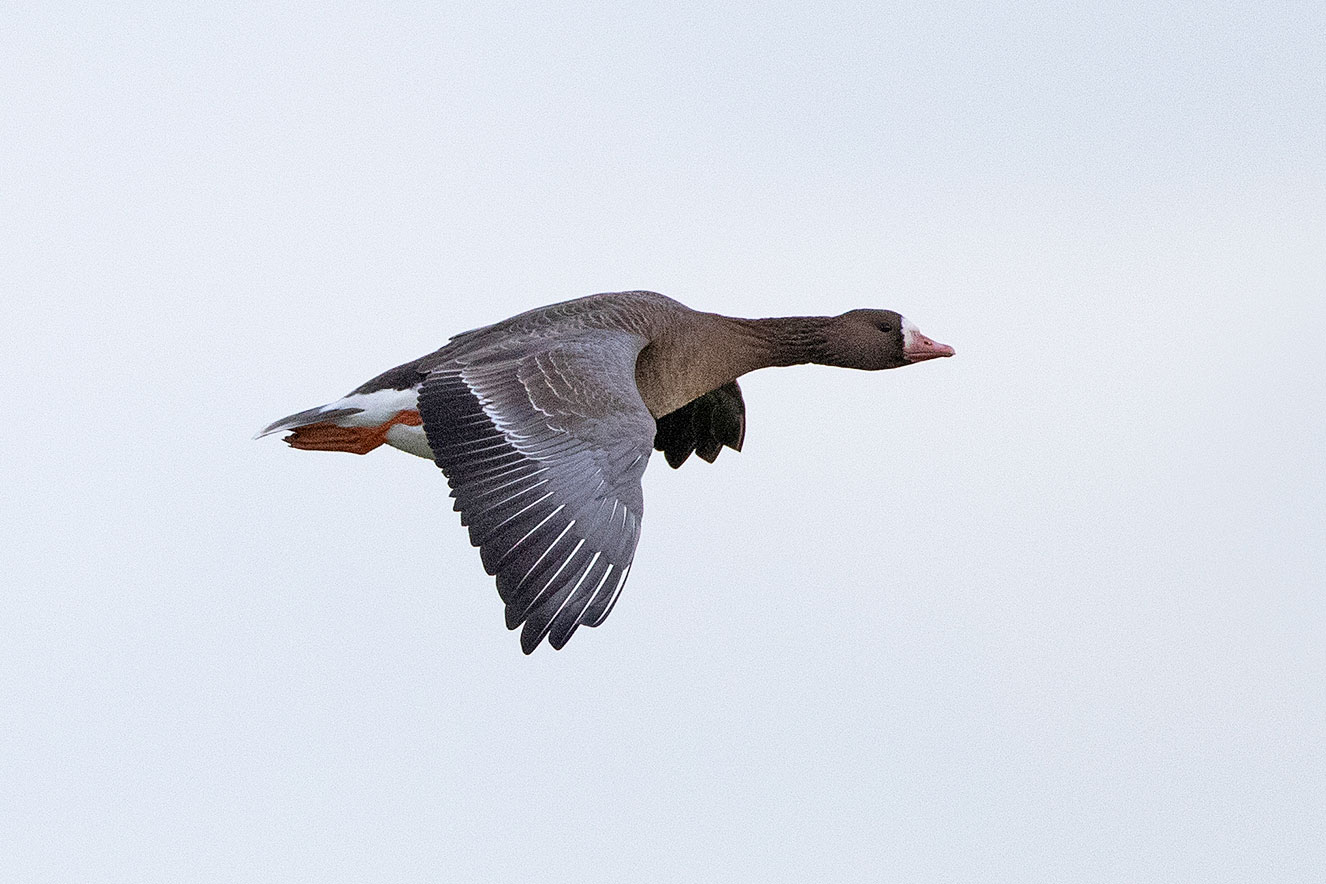 Russian White-fronted Goose (North Warren RSPB, Aldeburgh, Suffolk, 22 January 2019). In flight Russian White-fronted Geese are rather unexceptional in their structure. The key forehead pattern and bill and leg colour features can be seen on this close-range individual, but at longer range, focus on the rather uniform-looking upperwing, a function of extensive brown clouding across the central wing coverts (Andrew Moon). 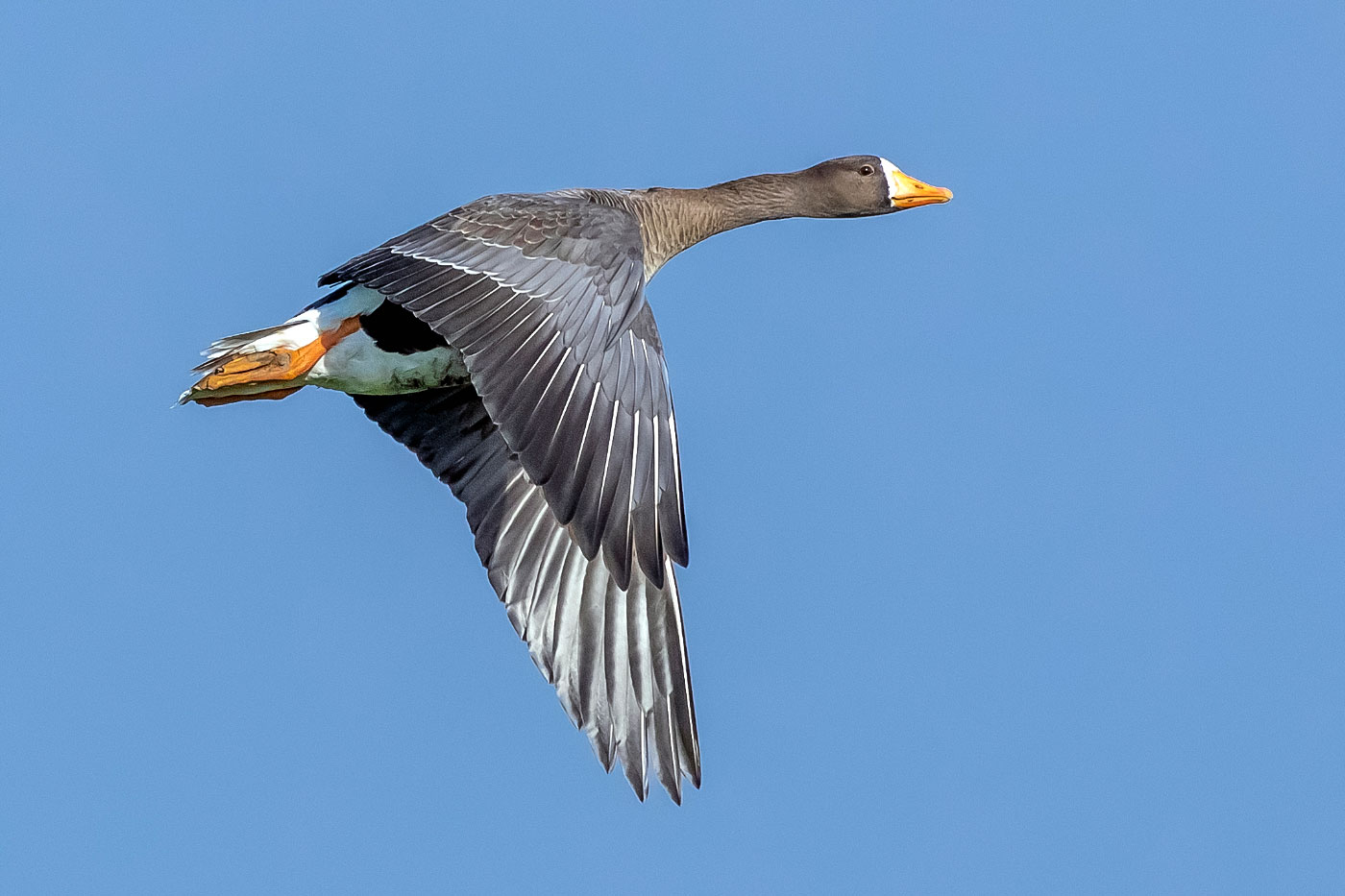 Greenland White-fronted Goose (Zeeland, The Netherlands, 14 March 2019. This flying Greenland bird looks both large and long necked, while the bright orange bill (matching the orange legs) positively gleams in the sunshine. On a dull day, however, or at range, this would be a more problematic identification, with the bird probably just looking big and dark. Note once more the brown wash across the wing coverts which mutes the contrasts in the upperwing (Vincent Legrand / www.agami.nl). 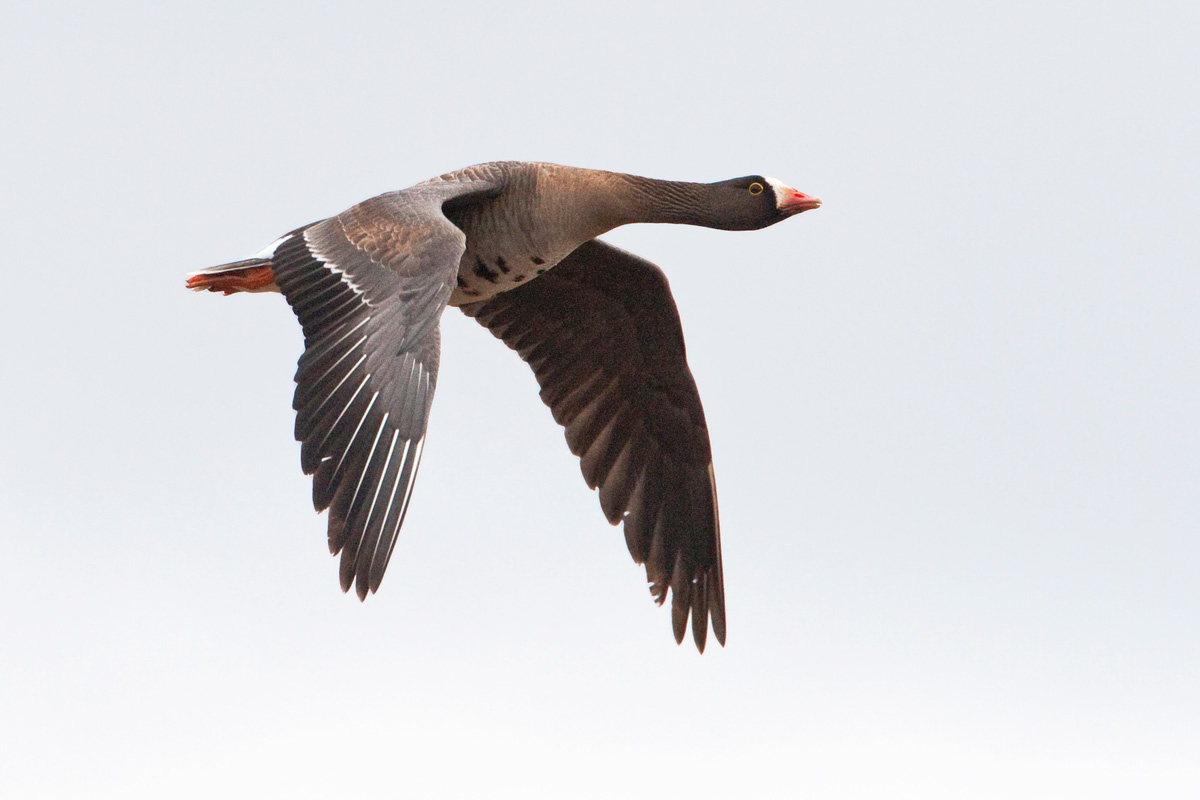 Lesser White-fronted Goose (Varanger, Norway, 10 June 2008). The short neck, rounded head and small bill of Lesser White-front are very obvious here, as are the bright yellow eyering and prominent forehead 'blaze'. Note in particular the strong contrast between the head/neck and the body, which is never this contrasting in Greater White-fronted Goose and invites comparison with Pink-footed Goose. The weak belly barring can be seen here also (Jari Peltomäki / www.agami.nl). 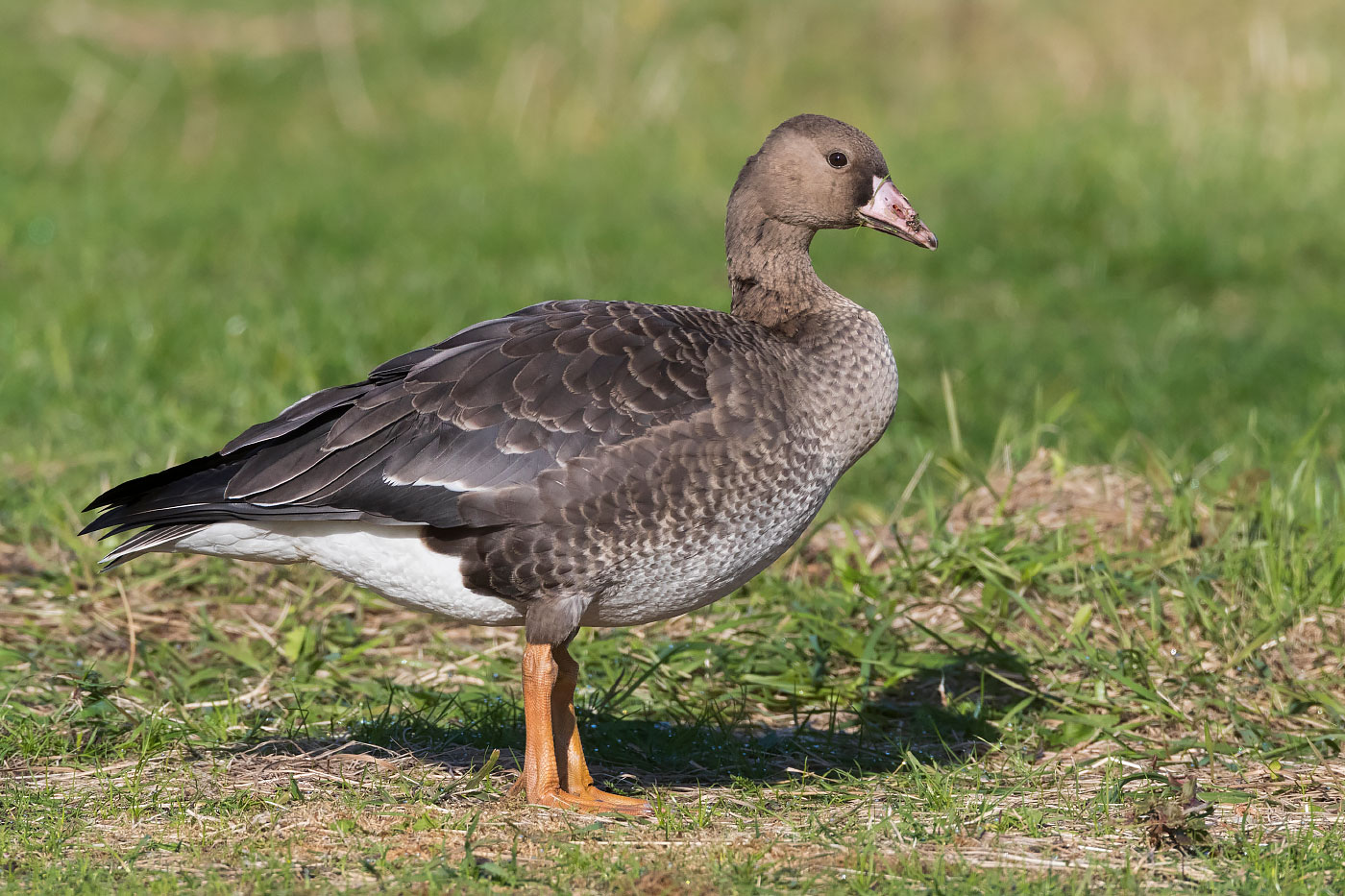 Juvenile Russian White-fronted-Goose (Vlieland, The Netherlands, 23 October 2016). This bird can easily be identified as a juvenile by the rather rounded pale fringes to its upperparts and body feathers. It lacks the white forehead and belly barring of an adult Russian White-front, but the overall structure of the bird, the grey-brown plumage hues, the medium-length triangular pink bill and the darker feathering around the bill base all readily identify it to subspecies (Marc Guyt / www.agami.nl). 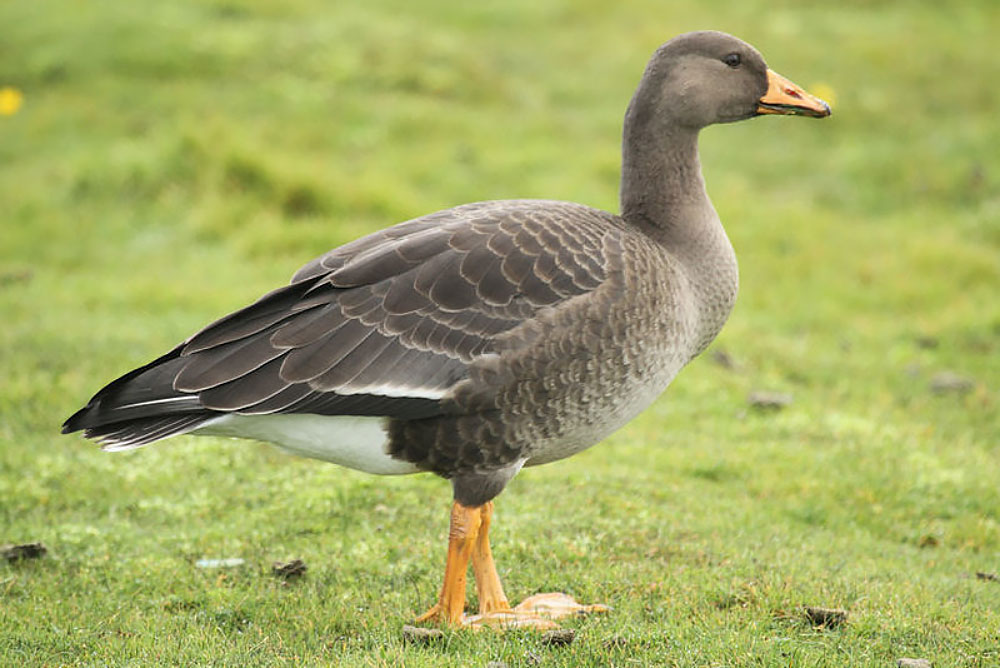 Juvenile Greenland White-fronted Goose (North Ronaldsay, Orkney, 2 November 2011). This juvenile also lacks a white forehead and belly barring, but it looks quite 'heavy' and also quite dark, being a rather rich brown; the bill is bright orange (matching the legs) and the white tip to the tail is narrow. This combination of features readily identifies this bird as a young Greenland White-front (Jacqui Herrington). 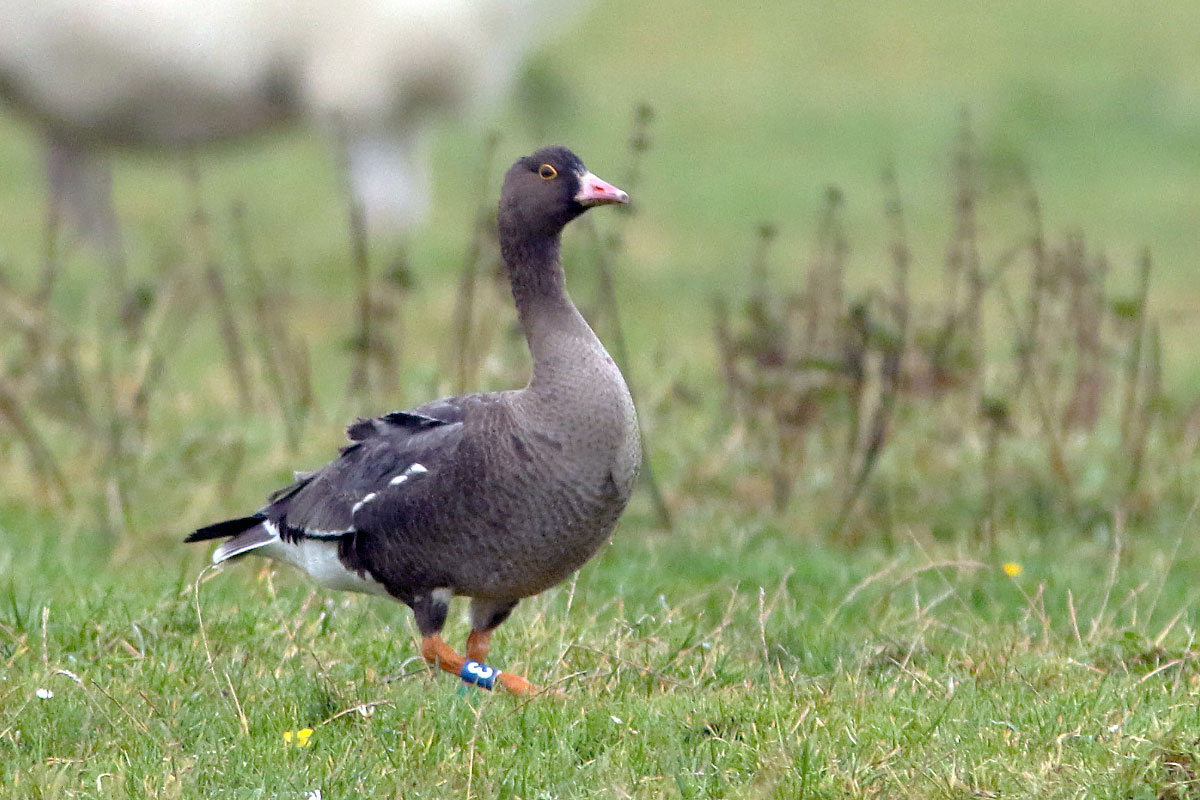