Great Northern Divers are impressive birds and any encounter with this species, either distantly on the sea or a more intimate view on an inland waterbody, is always a memorable experience. Its close relative White-billed Diver is, however, far rarer in Britain – finding one would make for a truly great day. 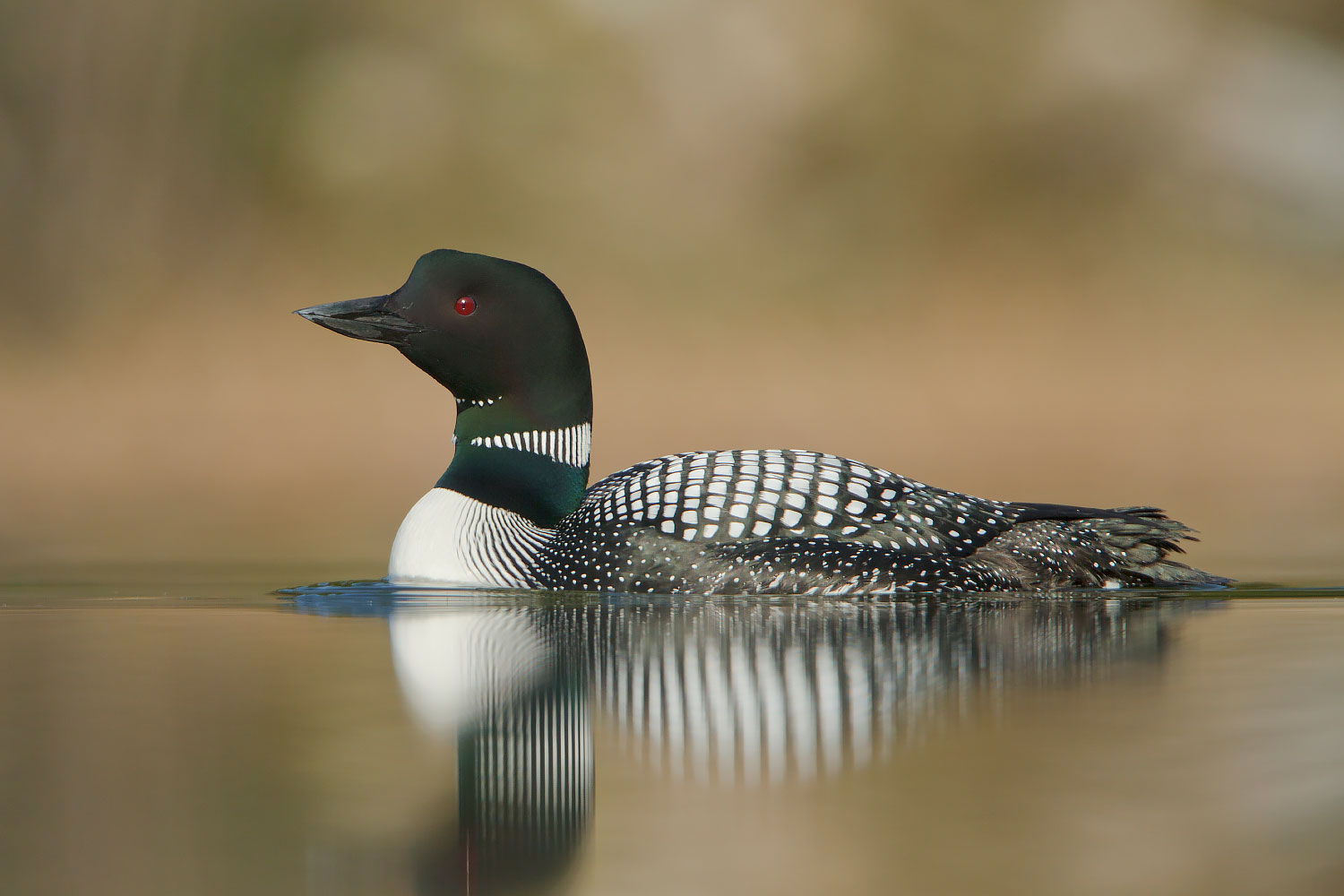 Though a regular wintering bird in Britain, Great Northern Diver is mainly a Nearctic species, where it is known as Common Loon. It breeds in Svalbard and Iceland, but its main range stretches from Greenland to Alaska. Here it is mainly a Low Arctic bird, breeding on lakes in the taiga zone. Nevertheless it is a relatively common winterer in north-west Europe, mostly at sea, but it also turns up frequently inland on lakes and reservoirs.

This is a very large and powerful bird with great presence. It has a heavy, dagger-shaped bill normally held level. Its head shape varies according to posture: it appears sleek and smooth when alert, but more angular with a pronounced forehead 'bump' when relaxed. The neck is thick and the body long. It is supremely adapted for life underwater and dives frequently and for long periods, often surfacing a great distance away from its diving point.

Summer-plumaged adults are striking, although such birds are infrequent in Britain. In this plumage the white 'blocking' on the upperparts and the white neck patch are obvious, while the bill looks wholly dark, not contrasting with the dark head and neck. Adult winter birds are darker above and no longer 'scaled'.

In juvenile plumage the species is dark brown above and white below, with broad pale feather fringes in the upperparts producing a neat, regular 'scaled' pattern. The lower neck shows a distinct dark 'half collar'. The neck sides are dark apart from a slight white 'indent' just above the collar and the face is extensively dark, although there is typically some paler feathering around the eye. The grey bill can appear surprisingly pale, especially when wet or when catching the light, but note that the culmen is dark thoughout its entire length.

In flight this is an impressively large, powerful diver. It flies with the head and bill stretched out in line with the body and, at the rear, it shows huge trailing feet. It is a strong flyer, almost goose-like, with slow, powerful, rather flexible wingbeats.

Though not generally heard in Britain, the call of Great Northern Diver provides a haunting backdrop to its breeding grounds. It is also the soundtrack to a host of Hollywood movies.

White-billed Diver is a High Arctic counterpart of Great Northern. It breeds on tundra lakes from Novaya Zemlya eastward through Siberia and then across to Alaska and High Arctic Canada.

It is rare throughout Europe, although a northward and then eastward spring passage around Norwegian coasts reveals the presence of a small wintering population somewhere in the North Sea or eastern Atlantic.

This species is genuinely uncommon in Britain. Treated as a rarity by the Rarities Committee until relatively recently, it has now been dropped from the national list, largely due to the discovery of regularly staging birds in spring, most notably off Lewis, Outer Hebrides, and in even greater numbers off Portsoy, Aberdeenshire. Elsewhere, however, this is an infrequent species, most regular in the Northern Isles, but decidedly rare in England. Here, North Sea coasts are favoured, with records falling generally in autumn and winter.

This is a very large diver indeed, fractionally bigger even than Great Northern. It is structurally similar, the main distinguishing feature being the different-shaped bill. This has an upward angle in the lower mandible, giving the impression of an upturn in the bill as a whole. This effect is heightened considerably by the fact that the bill is typically held raised at an angle, enhancing its upturned appearance and giving rise to the popular 'banana' comparison. The whole effect is similar to an enormous Red-throated Diver.

The bill is a pale ivory or buttery colour. It can be dark along the basal two-thirds of the culmen but, importantly, the outer part of the culmen is always pale. Against a dark background, the bill looks strikingly pale, but against the sky or a light background it hardly stands out and, as a result, the bird can give the rather strange impression of having no bill at all!

Adult summer plumage closely resembles that of Great Northern but, as with that species, this is rarely seen in Britain. Adult winters are darker above and no longer 'scaled'.

Again like its sister species, juvenile plumage is heavily 'scaled' above, but the head and neck are strikingly pale, the most eye-catching features being a weak lower neck 'half collar', some smudging on the rear ear coverts and a strongly isolated eye. The main pitfall lies with bleached or worn first-summer Great Northerns in late winter and spring which can look disconcertingly pale, especially around the head, and can give the illusion of having a wholly pale bill.

In flight, the species resembles Great Northern although (on non-adult summer birds) the pale head and neck and of course that pale bill should be obvious. Unlike Great Northern Diver, this species sometimes raises its head in flight, a further reminder of Red-throated Diver. 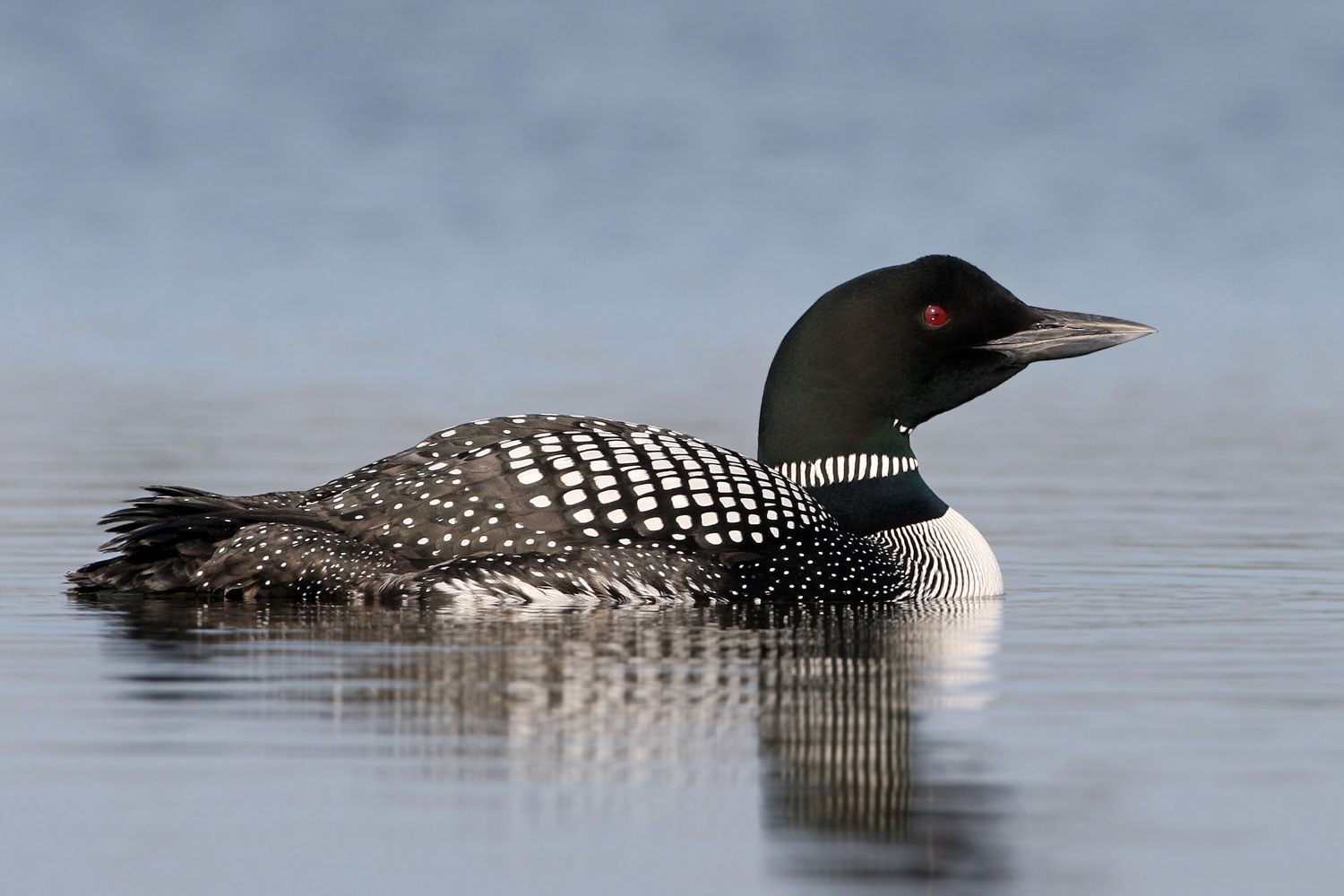 Great Northern Diver (Iceland, 28 May 2010). When seen close up like this, a summer-plumaged Great Northern Diver is revealed to be highly intricately patterned, with delicate white spotting above, lines of square white 'blocking' on the scapulars, fine black 'zebra stripes' on the neck and strange black-barred white neck bands. The eye is a deep red. Note that the bill, although dark, can give different impressions – appearing as dark as the head and neck in the opening image, but paler here as it catches the light (Sindri Skúlason). 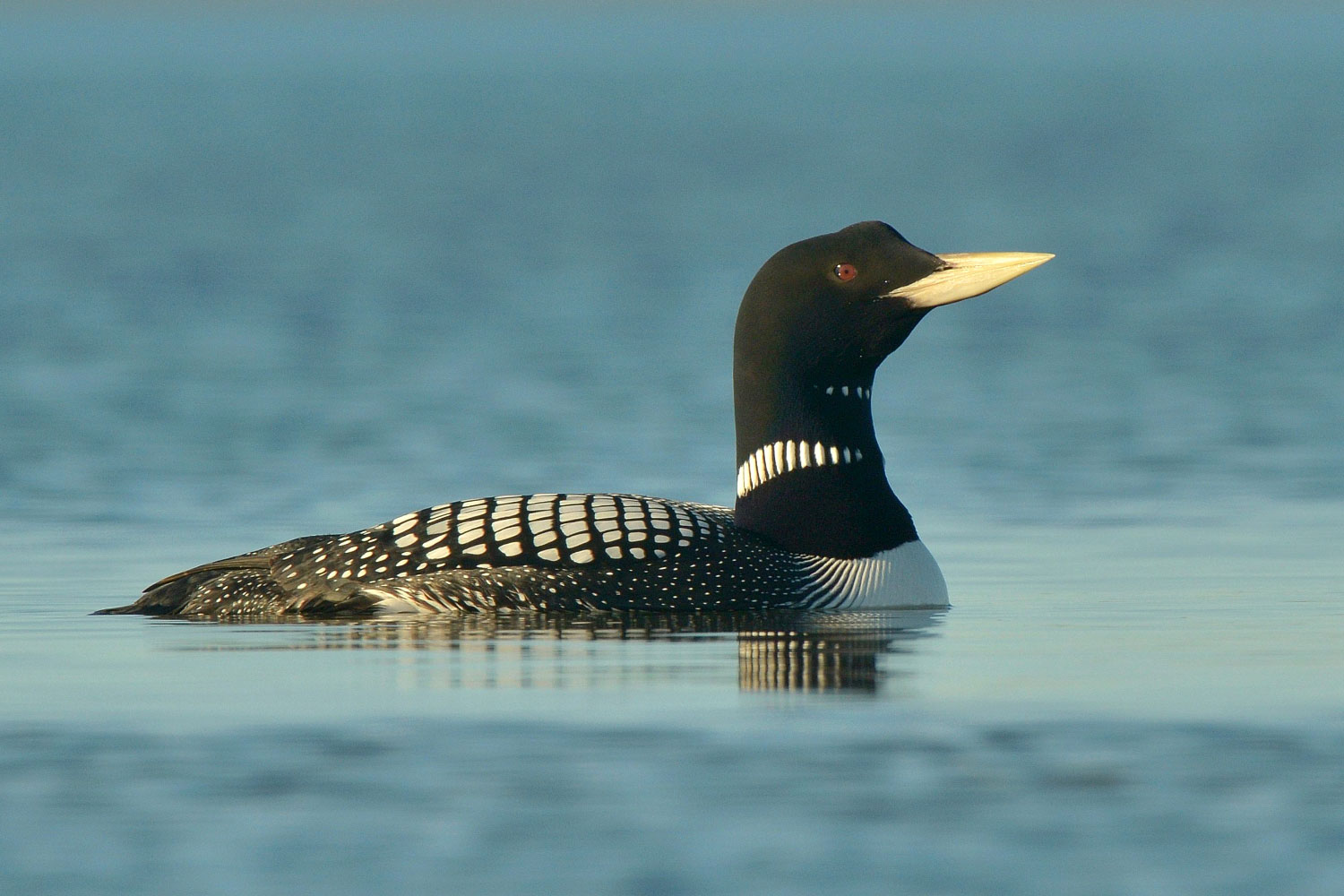 White-billed Diver (Chukotka, Russia, 5 July 2012). A summer-plumaged White-billed Diver is an impressive beast indeed, slightly larger and more powerful even than Great Northern. The plumage is similar (though the scapular 'blocking' here is particularly prominent) but the eye is drawn straight to the bill – a buttery colour with a kinked lower mandible and showing a dramatic contrast with the head and neck. Note also the typical posture with the bill held above the horizontal (Baz Scampion). 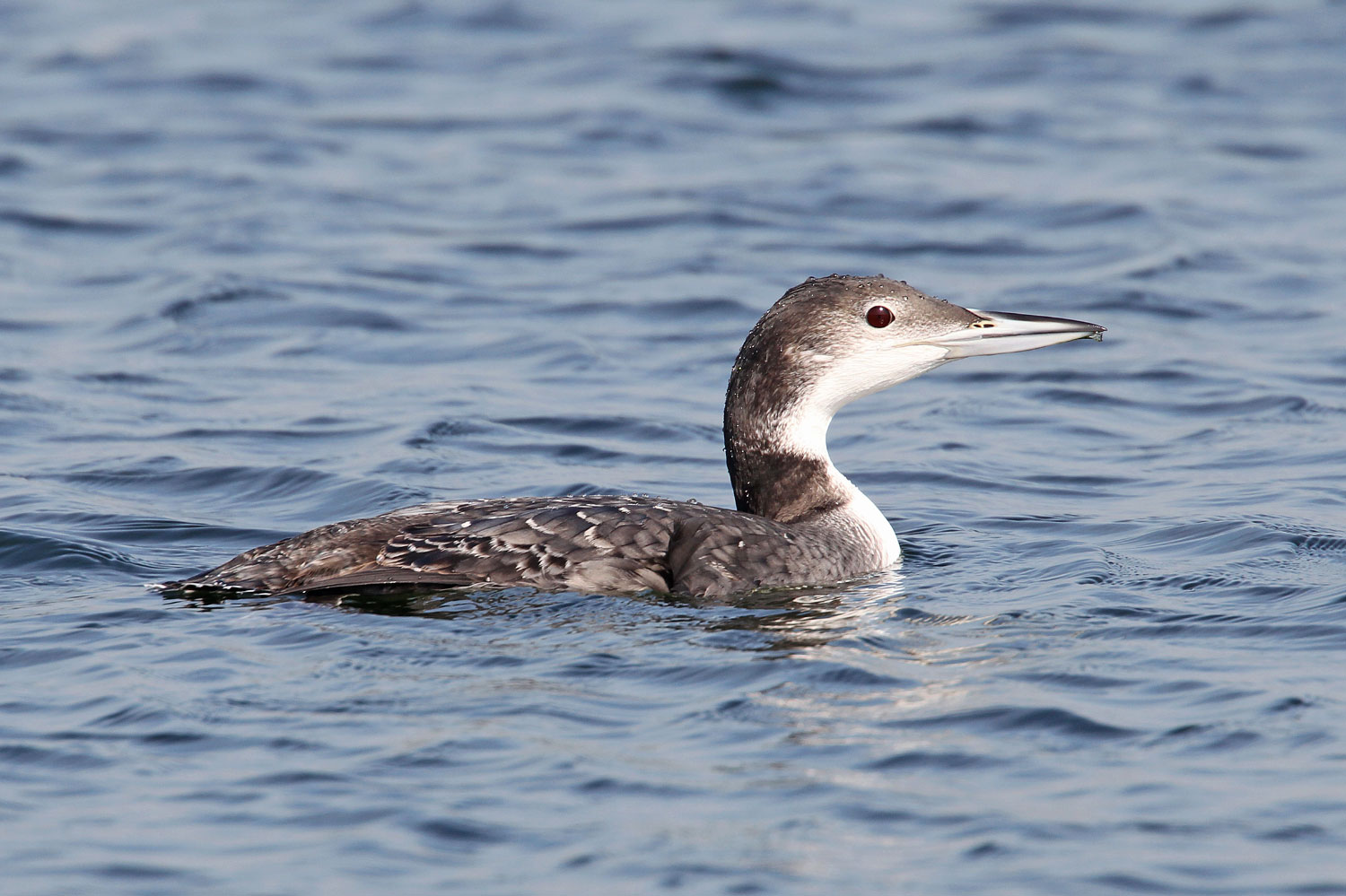 Great Northern Diver (King George VI Reservoir, London, 10 April 2010). Winter-plumaged Great Northern Divers are very different from those in summer, essentially brown above and white below. More specifically, note the prominent 'half collar' at the base of the neck, an 'indent' in the dark and white dividing line just above and a diffusely dark face with a discrete pale area around the eye. The bill appears disconcertingly pale (and is held up at an angle here) but its pale grey colour is normal, as is the wholly dark culmen all the way to the tip (Andrew Moon). 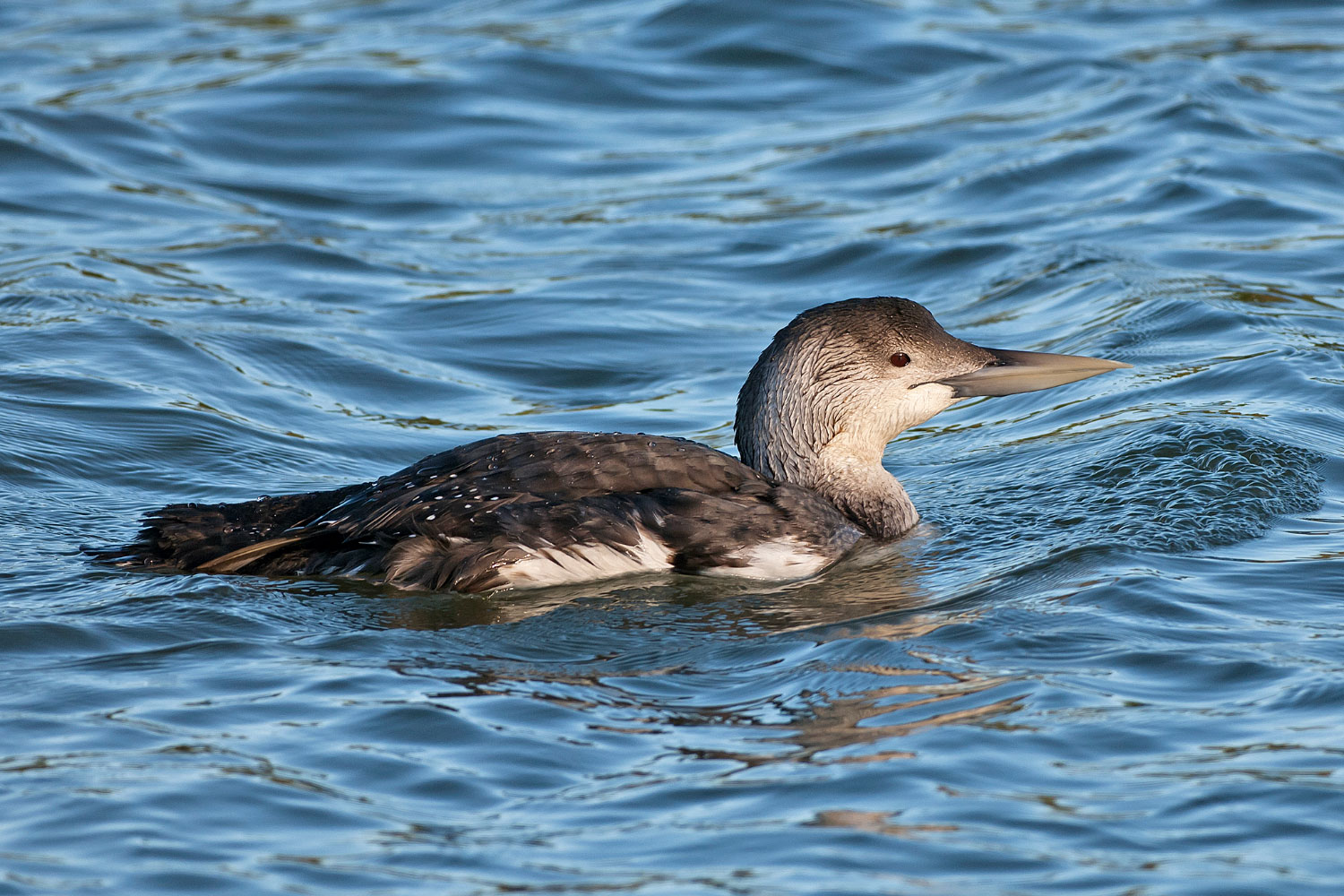 White-billed Diver (Hayle Estuary, Cornwall, 3 March 2007). This large diver is superficially similar to the previous bird, but note the rather pale neck with little contrast between the hindneck and foreneck and the rather pale featureless face with the ear coverts almost completely pale. The species has a dark 'half collar', but it is partially hidden here. These features indicate a White-billed Diver, a diagnosis confirmed by the bird's butter-hued bill, kinked lower mandible and culmen which is dark only at the base, the outer two-thirds being pale (Steve Young / www.birdsonfilm.com). 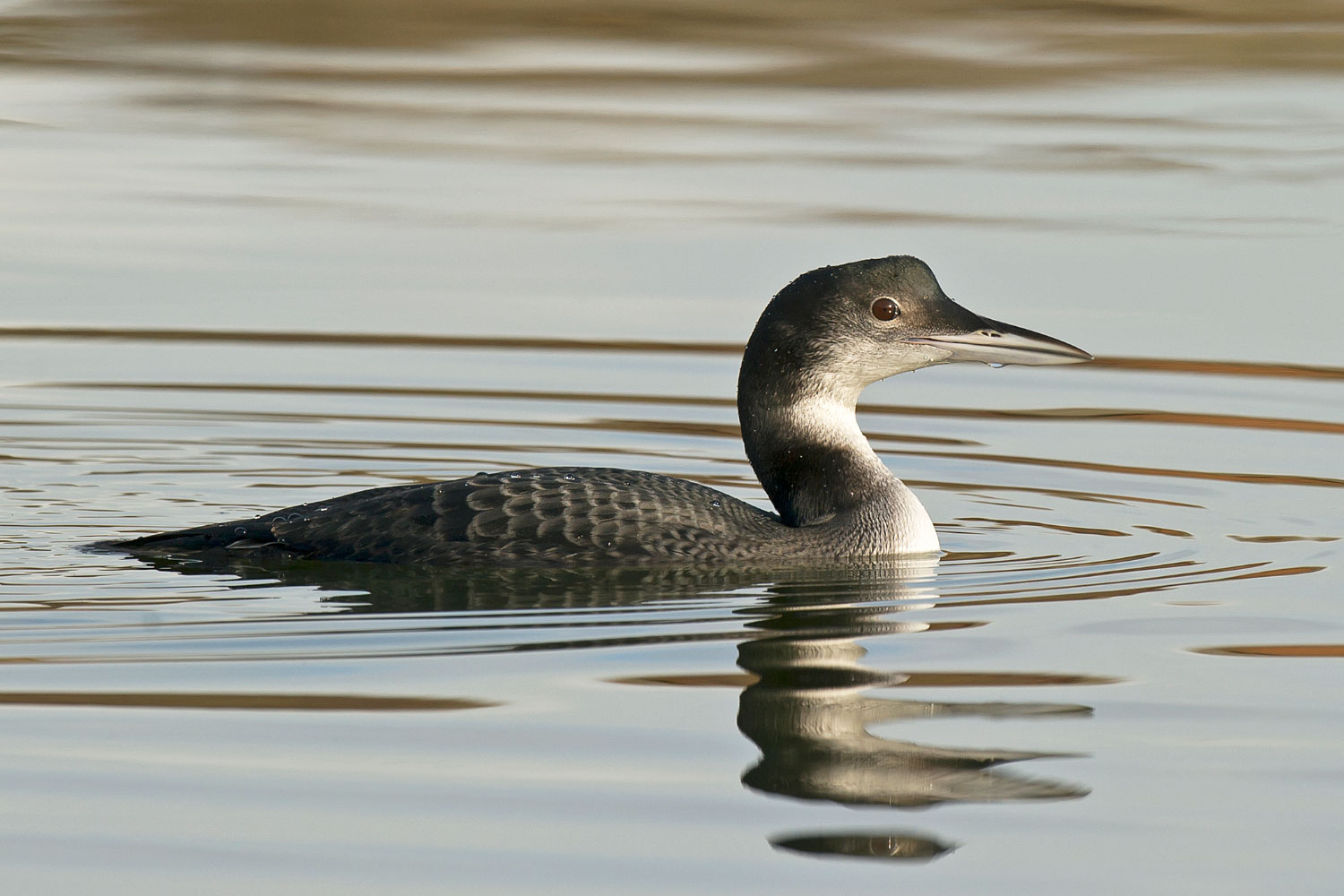 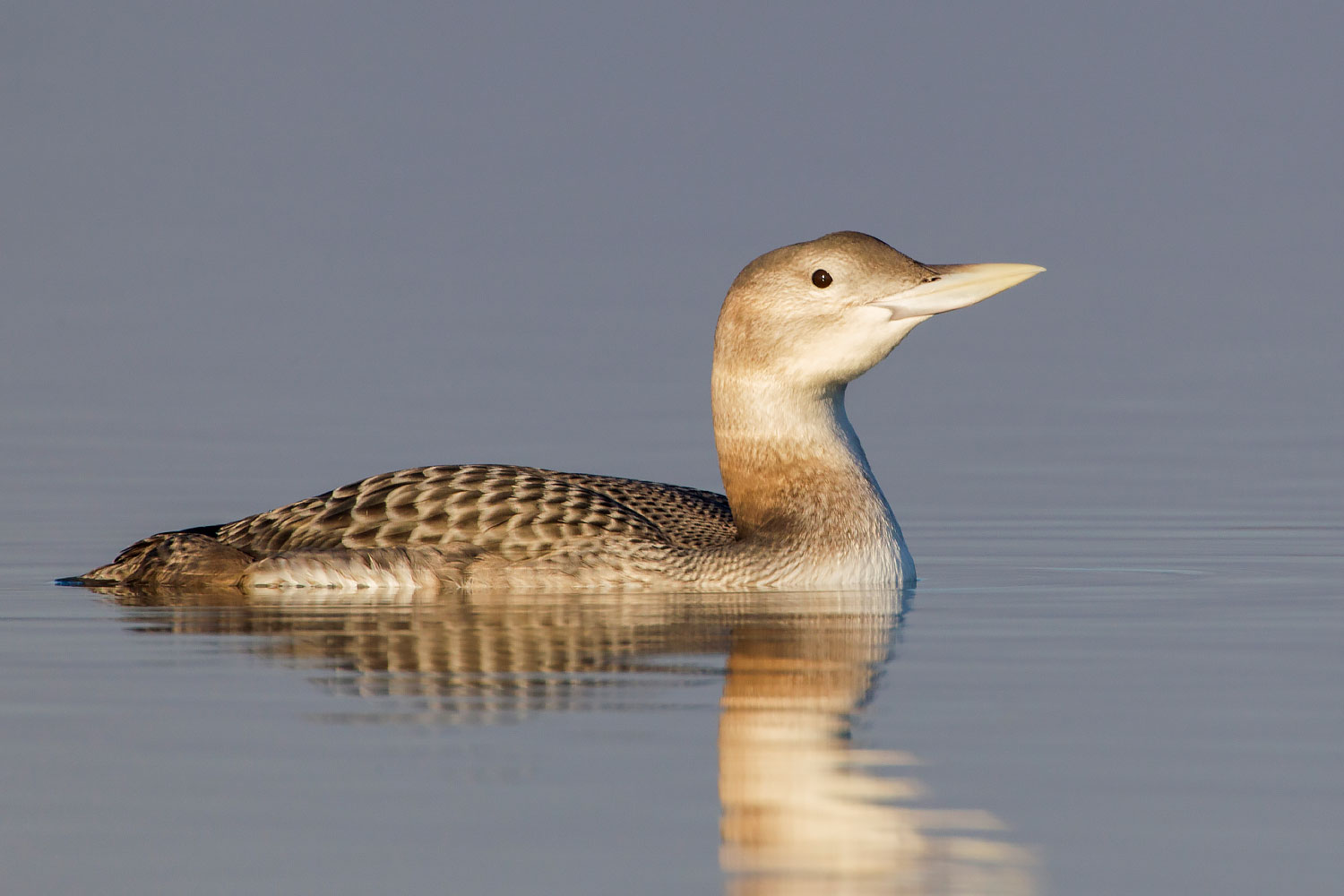 White-billed Diver (Lac du Der, France, 13 December 2013). The 'scaly' look caused by the pale feather fringes identify this diver as a juvenile. Most striking, however, is the bird's overall paleness: a very pale neck lacking in contrast, a weak 'half collar', an extremely light face with an isolated dark eye and, most obvious of all, a large butter-yellow bill with a kinked lower mandible and a pale outer culmen. This is a classic White-billed Diver and, typically, the bill is held above the horizontal, echoing the characteristic posture of its smaller cousin, Red-throated Diver (David Monticelli / www.agami.nl). 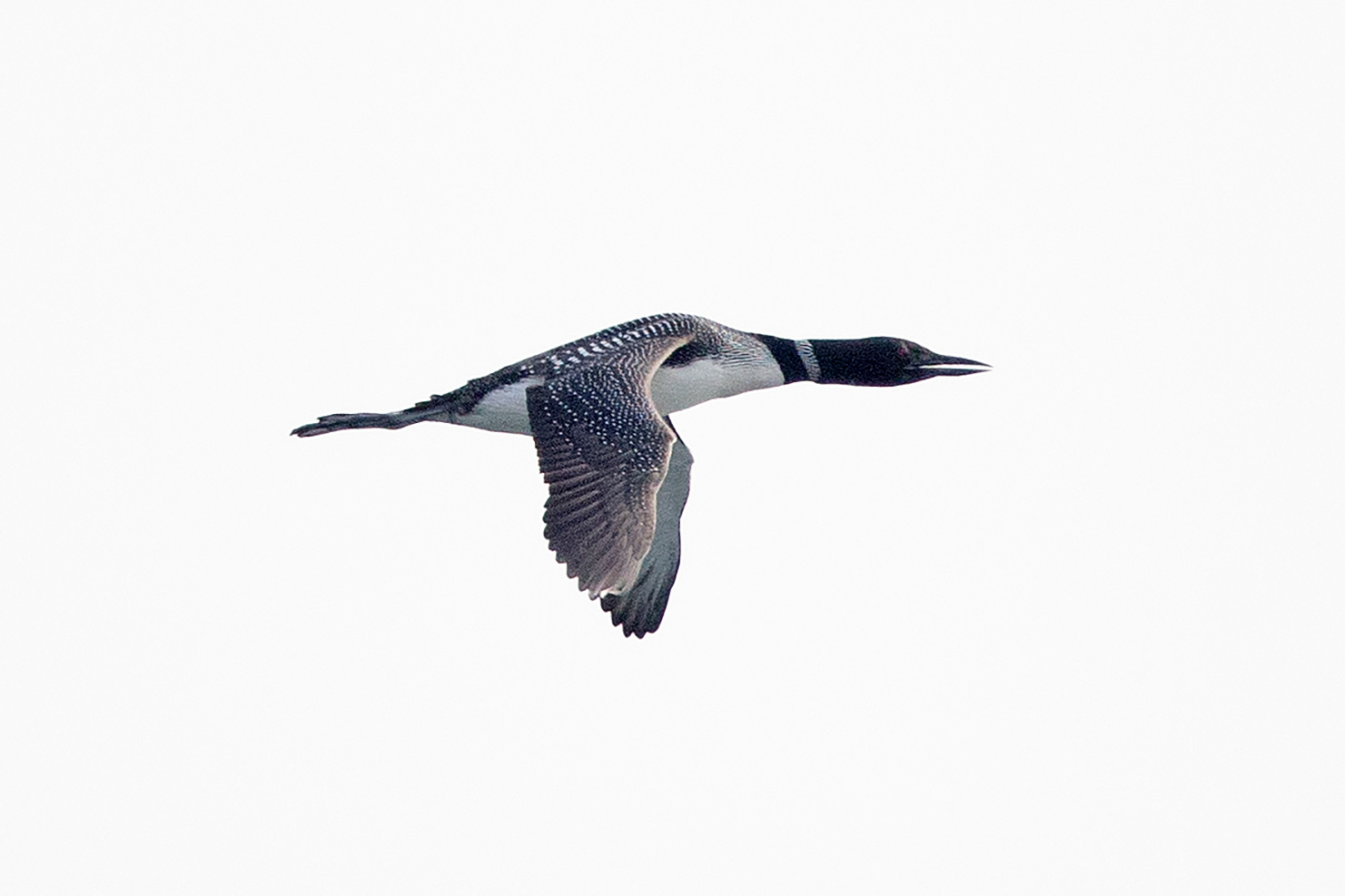 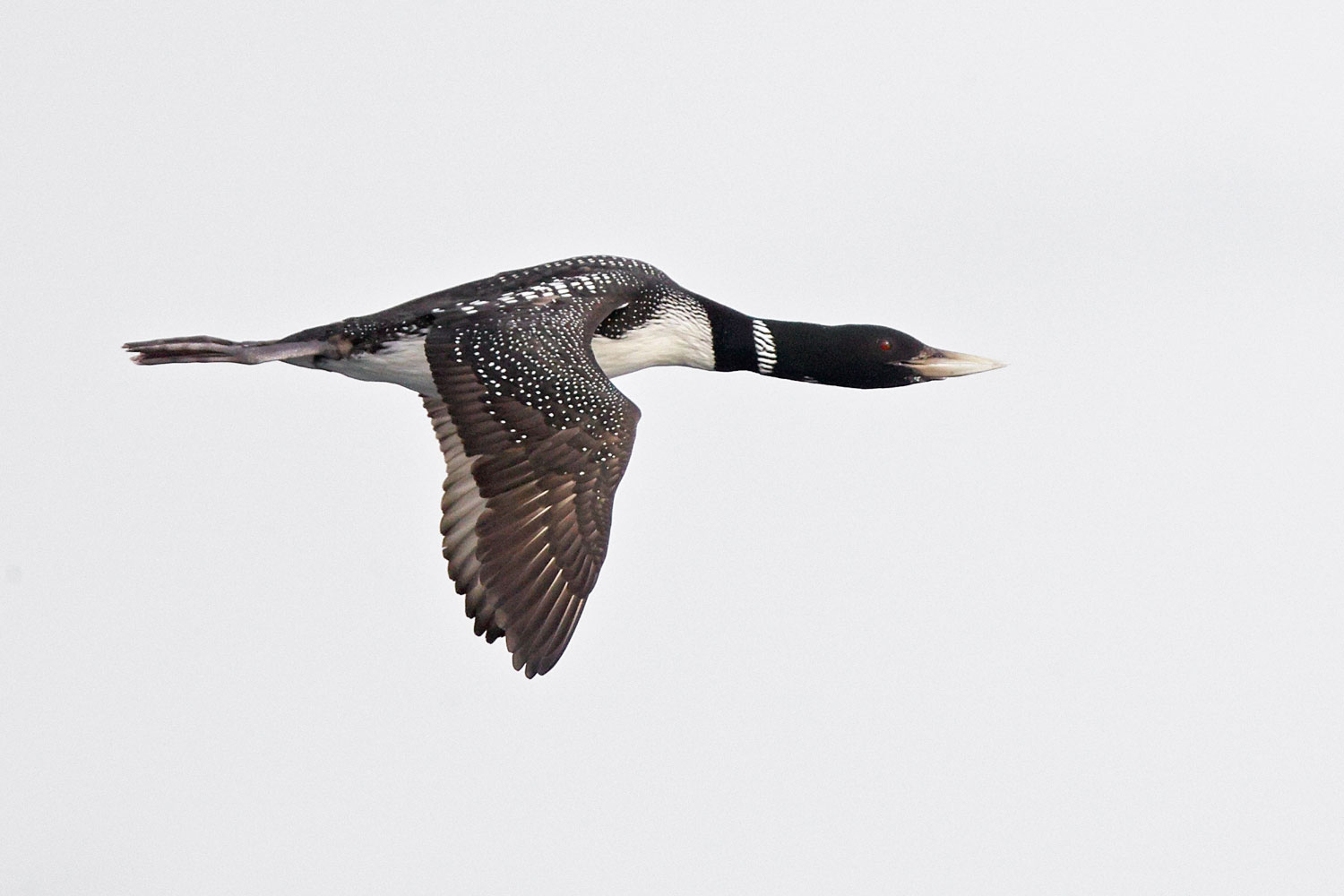 White-billed Diver (Gamvik, Norway, 12 May 2014). If a flying Great Northern Diver is impressive, then a flying White-billed is even more so! Note here the truly enormous size of the trailing feet and the fact that the bill is held upwards at an angle in a way reminiscent of a Red-throated Diver (flying White-billed Divers can also 'head-lift' in flight like their much smaller cousin). The bill here is typically butter coloured and the outer part of the culmen is pale (Markus Varesvuo / www.birdphoto.fi). 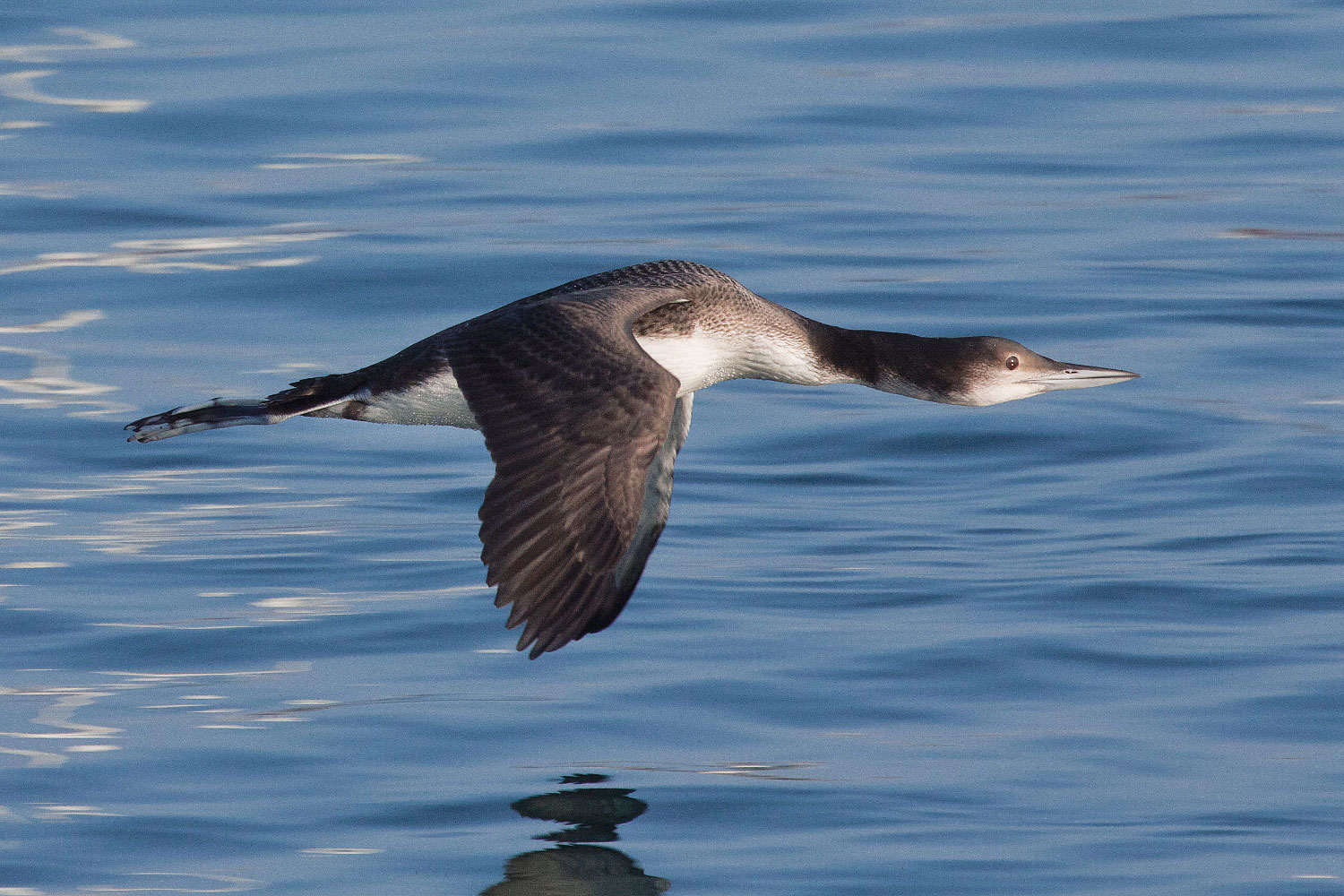 Great Northern Diver (Morro Bay, California, 13 December 2011). This flying winter-plumaged bird shows the same structure (note the big feet), but the plumage is very different. Note the very dark-looking neck, with the dark hindneck extending well forward around the neck-sides, the 'half collar' and 'indent' and the diffusely dark face. The bill might gleam pale, but it is grey and the culmen is wholly dark (Marlin Harms). 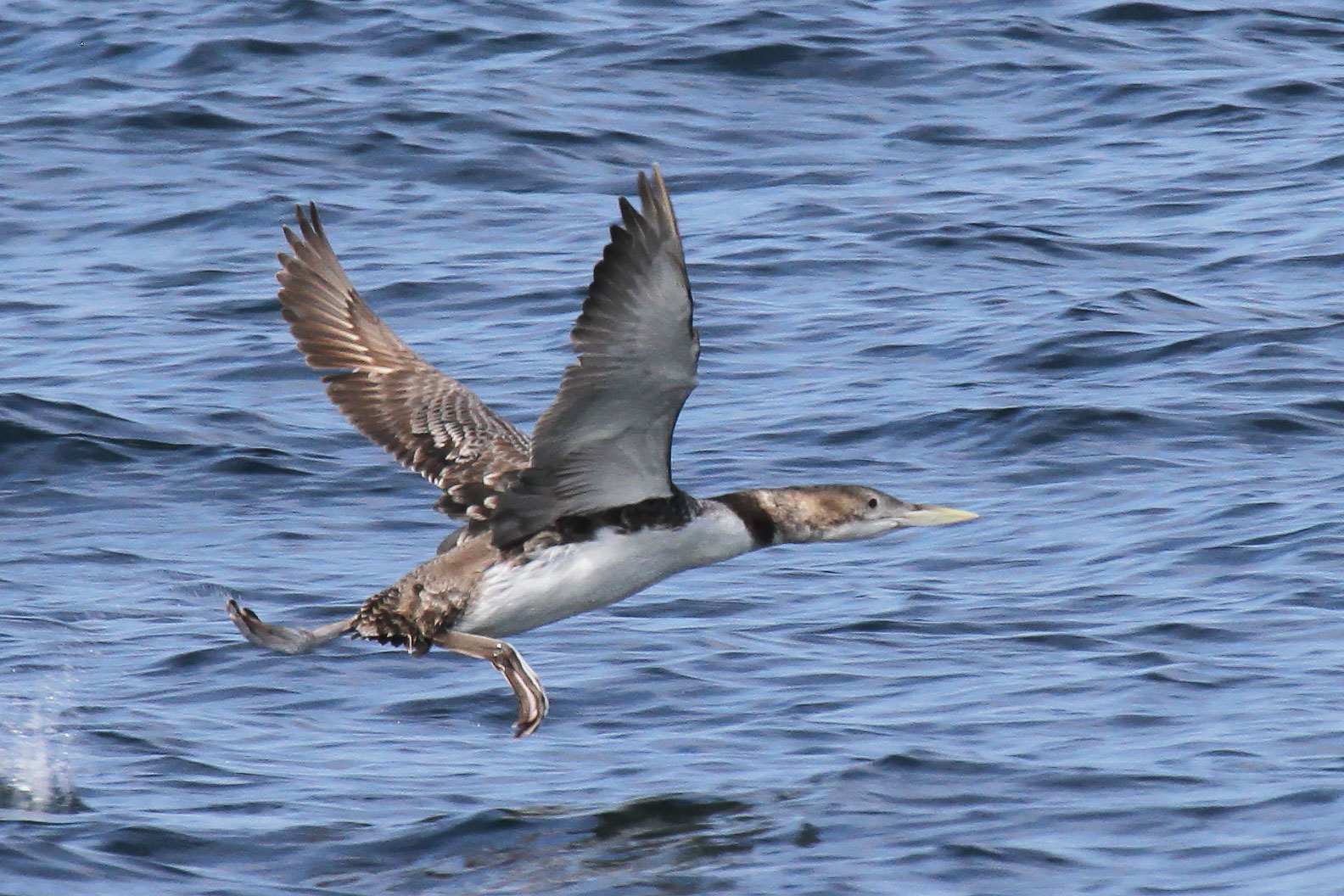 White-billed Diver (Portsoy, Aberdeenshire, 9 May 2015). This bird has been caught on take off so its flight appearance is not entirely typical but it is still easily identifiable as a White-billed Diver thanks to its pale butter-hued bill and pale, plain face with pale ear coverts and an 'isolated' eye, all contrasting well with a dark 'half collar' on the lower neck (Tim Marshall).